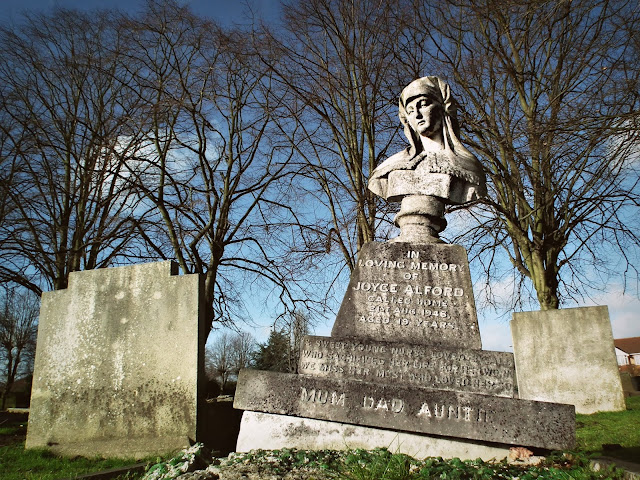 My favourite entries in Hugh Meller and Brian Parsons’ ‘London Cemeteries’ are the disparaging ones. Barkingside Cemetery which serves the north-eastern corner of the London Borough of Redbridge (the commuter districts of Gants Hill, Newbury Park, and Fairlop as well as Barkingside)   finds them at their most acerbic; “although well maintained it represents a sad departure from the exuberance of Victorian Cemetery planning. The ground is flat, the tombstones feeble, planting is scant and buildings nil. A centrepiece has been formed by an ugly brick structure that resembles a wishing well but actually houses a dripping tap. Dull anonymity prevails.....There is no chapel, only a waiting room and lavatories. Functionalism reigns supreme in a world that the Victorians would find it hard to recognise.” One would like to take issue with them but it is difficult. On a sunny day it isn’t an unpleasant place to wander but you have to concede that the cemetery is as dull and suburban as the community it serves. 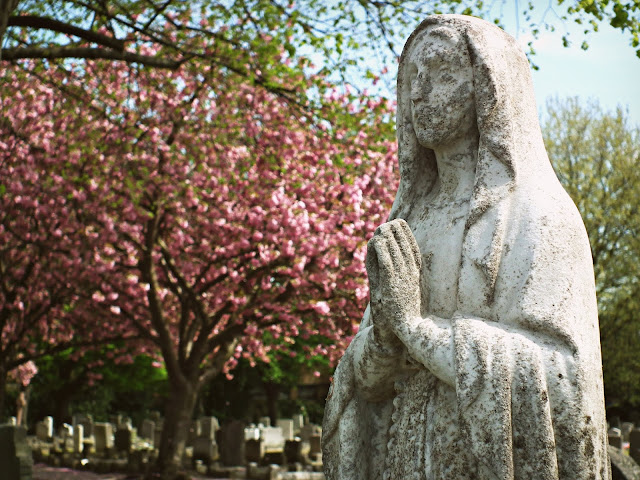 Barkingside was opened as a municipal cemetery in 1923 by Ilford Urban Council. The deceased of the area had previously been laid to rest in the churchyard of Holy Trinity but by the 1920’s house building in the local area had driven up the population to the point where its dead were starting to outgrow the space available to bury them in. Conveniently there was a vacant 6 acre plot of land right next to the church, bordered by a recreation ground to the east and new housing developments to south and west. At the chilly consecration ceremony in January 1923 the Bishop of Barking pleaded indisposition and stayed warm indoors while the stalwart Bishop of Colchester took his place leading a procession of clergy, choir and congregation around the muddy periphery of the site before delivering a a brief but lugubrious oration to the small and shivering crowd, reminding them, as if they needed reminding in that bitter wind, of the transitory nature of life. In this changing world, he told them, Christians believed that there was a life that changed not. They believed there was a land fairer than this, and by faith they could see it afar off. They did not take their loved ones bodies to the grave as those who had not hope, but as those who would be carried home on the shoulders the Good Shepherd. The restive congregation barely paid attention but reporter from the Chelmsford Chronicle dutifully noted down the details of the Bishop’s peroration and preserved them for posterity before escaping from the cold empty cemetery to the warmth of of the taproom at the nearby Chequers Inn. 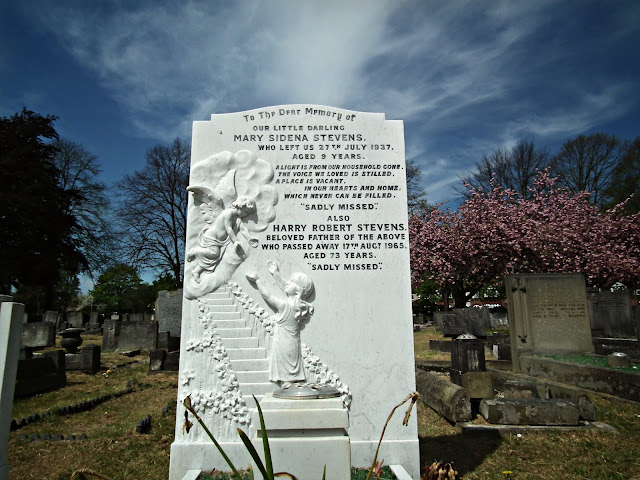 The only burial Meller and Parson’s note is Paul Philip Levertoff, a Belorussian Jewish scholar who rather improbably became a Church of England clergyman. He was the father of poet Denise Levertov who I like to think surely flew back from the States to attend his funeral in 1954. Another headstone bearing a compass marks the last resting place of Leonard Caius Bliss who died in 1991 and commemorates him simply as an ‘Inventor’. As full of useless data as it is the internet bears no trace of any of the inventions of this relatively recently deceased inventor but his ingenuity must have at least impressed his family. There are, as always, a few war graves. These include 21 year Reginald Alfred Alabaster of the 206 Squadron who died at RAF Leuchars in Fife in 1944 when the Liberator bomber he was crewing overshot the runway in bad weather killing all 11 crew and a civilian meteorologist. And 40 year old Leading Aircraftman William George Skeet of the Royal Air Force Volunteer Reserve, 2911 Squadron. On a mild November afternoon Aircraftman Skeet was riding a bicycle along a country lane in Aldborough Hatch. He stopped to chat to 43 year old Phil Perkins, the landlord of the Dick Turpin public house. The conversation was rudely interrupted by a V2 rocket which dropped out of the sky 12 miles short of its central London target and instantly killed both men. 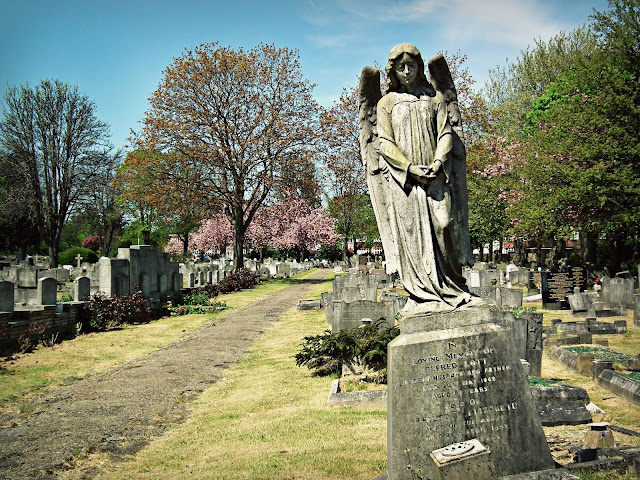 The most prominent memorial was raised in 2008 and dedicated to the memory of the children and staff from Dr Barnardo’s home who were buried in the cemetery or in next door Holy Trinity churchyard between 1885 and 1976. The Barkingside Home for Girls was founded in 1873 when Barnardo married Syrie Louise Elmslie and the couple were given the lease of a 60 acre site in Mossford green as a wedding present. It became Barnado’s principal Home and the headquarters of the charity. The Home always had a dedicated plot of ground within the cemetery but most burials were not marked with headstones. The new memorial commemorates  the names of all 633 children and staff buried here on four large slabs of fine grained black dolerite stone from Zimbabwe. 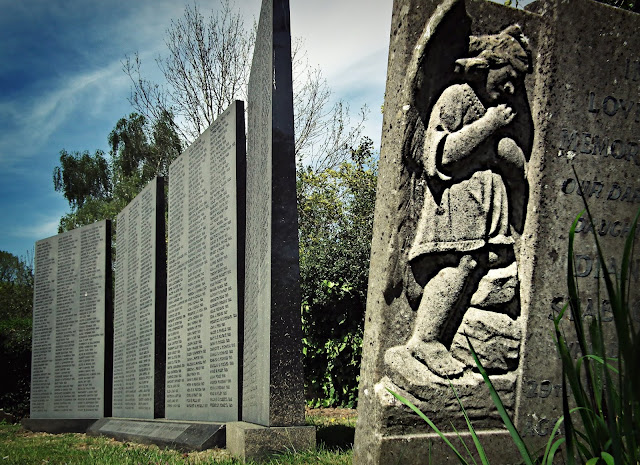 There are no really distinguished memorials in the cemetery but I have a soft spot for the grave of Joyce Alford, “a sweet young nurse who sacrificed her life for her work” according to her epitaph who died at the age of 19 in August 1946.The bust that tops the modest memorial may be a portrait or it may not but it is one of the few notes of individuality struck in the rows of ‘feeble tombstones.’ 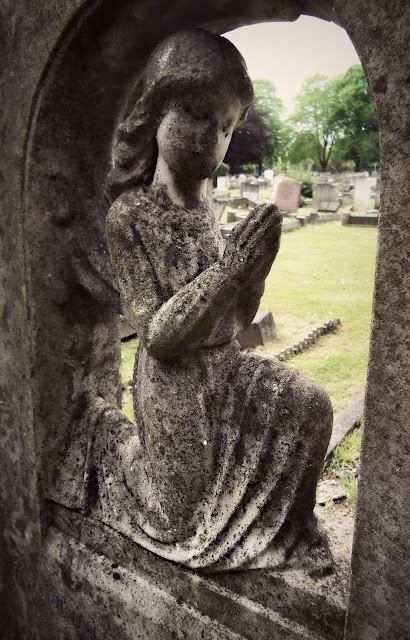