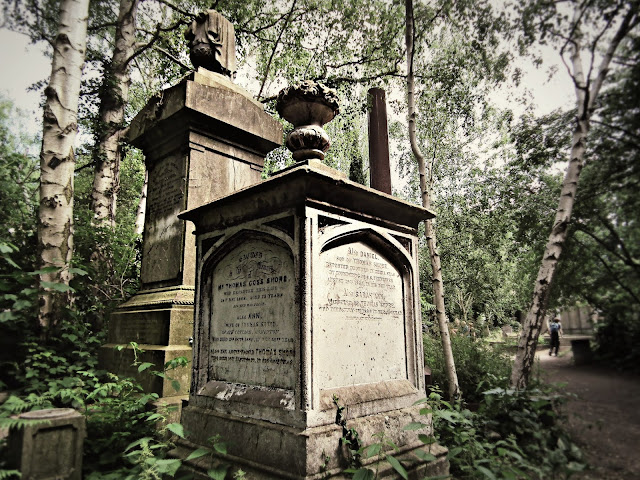 If only by sheer bulk the memorial in Abney Park Cemetery for Thomas Goss Shore is imposing. It is a solid 8-foot square of dressed stone topped with an urn which must weigh at least a couple of tons. The inscription is unilluminating, merely telling us that he died on 28 May 1868 at the age of 73 and that ‘his end was peace’. Also commemorated are an Ann Shore wife of Thomas Shore of Ayr Cottage in Edmonton, who died in 1860, ‘the above mentioned Thomas Shore’ (i.e. husband of Ann) who died in 1889, their daughter Sarah Ann and their son Daniel. It is Daniel that has always intrigued me; he was “reported drowned in China Seas by foundering of SS Ferntower August 29th 1886 in his 26th year”.

Thomas Goss Shore died a wealthy man. According to probate records he was worth almost £12,000 when he died a bachelor at Devonshire Place in Stoke Newington, leaving his fortune to his nephew and only relative Thomas who is reported as being a plumber living at the same address. An advert in the Melbourne Age of 31 August 1868 suggests Thomas may have had a long-lost brother who disappeared in the gold fields of Bendigo in the early 1860’s:

SHORE, JOHN, formerly of the City of Norwich, in England, Journeyman Baker, who was the son of JOHN and SARAH SHORE, and who emigrated to Melbourne, Victoria, in October, 1854, In ship Misaporo(?), who was last heard of at Bendigo Gold Holds, about seven years ago, if living, or If dead, his friends or representatives, If any, are requested to communicate with the undersigned, with proper evidence of his or their identity, to entitle him or them to a share of the personal estate of his uncle, Mr THOMAS GOSS SHORE, who died in London, on Saturday the 28th  May last. Dated this 19th day of June, 1868. Messrs GRAY, JOHNSTON & MOUNSEY. of No 5 Raymond Buildings, Grays Inn, London, England, Solicitors for the administrators of the said Thomas Goss Shore.

I am unable to discover how Thomas Goss Shore made his money or anything else about him other that he was born in Norfolk in 1795 to Brightman and Mary Shore, was baptised at St Peter Mancroft and had a brother called John.  Thomas’ nephew, John’s son Thomas, left Norfolk and married a woman from Stoke Newington. At the time of the 1851 and 1861 census Thomas and Ann were living at 39 Tottenham Road in Islington, just off the Balls Pond Road. By 1871 they had moved to a larger house at 29 Beresford Road, next to Newington Green. Thomas was no longer a humble plumber; he gave his occupation as ‘owner of houses and properties’ and the family had at least one live-in servant. Two of his children, 16-year-old Brightmore (almost named after his grandfather?) and 10-year-old Daniel were not listed on the census return as they were boarding with schoolmaster George Higgins at 42 Clifden Road, Homerton. Brightmore later became a land surveyor and Daniel became a merchant seaman; he was awarded his second mate certificate on 28 June 1882. I presume he was second mate aboard the SS Ferntower of Liverpool (formerly the SS Bosphorus) when foundered during a typhoon off the mouth of the Saigon River, in the East China Sea in 1886. 50 crew and passengers were drowned as explained by the Morning Post on 21 October 1886:

SHIPPING CASUALTIES.  The China mail received at Plymouth yesterday bring the details of the loss of the British steamer Ferntower, with 50 lives, during a typhoon, off the mouth of the Saigon river. In the course of the gale one man after another was washed overboard. The vessel was thrown on her beam ends and sprung a leak, while volumes of water poured through the smashed skylights. By constant pumping the vessel was kept afloat for some hours, but eventually she gave a violent plunge and went down head foremost. There was no time to launch the only undamaged boat, and the majority of the passengers and the seamen on deck were thrown into the water, others being carried down with the vessel. The deck-house became separated from the wreckage, and on this some of the officers and sailors clambered. For three days and nights they floated about on this raft. They were without food, and had almost abandoned hope when the British steamer Vindobola hove in sight and rescued them. The survivors were so overjoyed that their rescuers thought them mad, but they soon recovered and told the story of their privations. The drowned, including the captain, were over 50 in number.