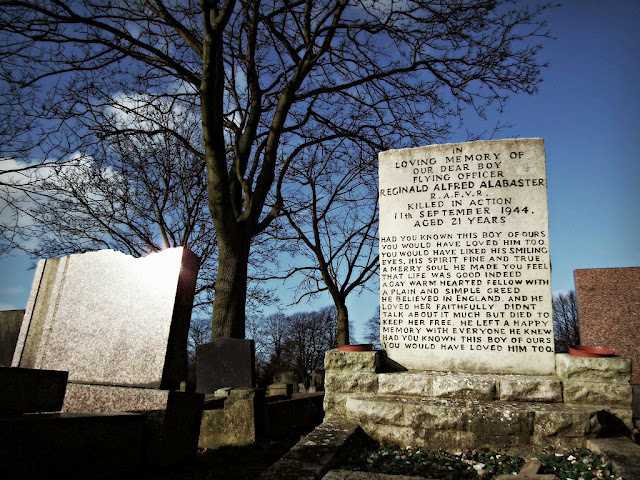 
We don't know which one of Reginald Alabasters bereft parents wrote his epitaph, his father Alfred Thomas Alabaster or his mother Emily Cynthia. For some reason the date of his death on the headstone seems to be wrong – he almost certainly died on 14 September rather than 11th.  He was based at RAF Leuchars in Fife and was a crew member in 206 squadron on the Liberator bomber BZ961. At 2.00pm on Wednesday 13 September 1944 two Liberators, BZ961 and EB887, took off from Leuchars to go on a routine anti submarine patrol a couple of hundred miles northeast of the Faroes.  When the 12 hour patrol ended the two aircraft were ordered to divert to Tain on the Cromarty Firth because of poor weather conditions in Leuchars. The EB887 landed at 3.40am and Reginald’s BZ961 at 4.15am. The exhausted crews rested until the afternoon of the 14th and then started to think about flying back to Leuchars. Weather conditions were still bad but one of the crew of the EB887 was about to get married on Saturday and was obviously anxious to get back to base as soon as possible. A civilian meteorologist, Jack Davidson, who worked for the Air Ministry was due to go on leave. He too was keen  not to spend his precious leave kicking his heels in the highlands. He wanted to get home to Edinburgh and begged a lift from the crew of the BZ961. The crews of the two aircraft eventually decided to risk the poor weather and make an attempt to fly to Leuchars.  The EV887 left Tain first, at 6.40pm, followed shortly by the BZ961.  The EV887 arrived at Leuchars in low cloud (barely 100 feet above sea level) and poor visibility. Because of the high ground to the west of the runway the pilot made his approach from the east, over the sea. It took him three attempts to get his plane down.  The crew were barely out of their aircraft when they heard the BZ961 approaching the runway. To their horror the plane overshot the runway and flew on about 3000 yards before crashing into Lucklaw Hill. They heard the sound but the mist stopped them seeing anything  of the explosion except the sudden red glow in the grey evening fog. All 11 of the crew, including Reginald, were killed instantly as was Jack Davidson the meteorologist who had only wanted to get back to his family in Edinburgh.


The Air Ministry later wrote to the families of the dead crewmen:
"It was the opinion of the investigators that the pilot should have turned back to RAF Tain in view of the weather conditions. The 206's squadron commander was also deemed irresponsible for permitting the aircraft to return, in view of the weather conditions of low cloud and poor visibility. The AOC-in-C considered the accident due to the failure of the pilot to return to RAF Tain and the failure of the aircraft to receive a wireless telegraphy message issuing this instruction. The CO of 206 Squadron was particularly responsible for permitting the flight in the first place."

Apparently the shape of the plane was still visible in the turf of Lucklaw Hill well into the 1960’s. The hillside itself was covered with wild pansies and  later disappeared into the workings of the famous red felsite quarry at Balmullo.
Posted by David Bingham at 16:19