"Design for Death" Barbara Jones (Andre Deutsch 1967) Out of print 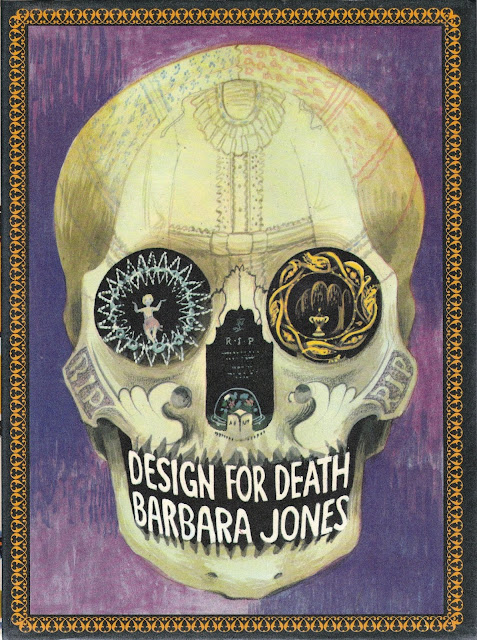 “Second-hand books are wild books, homeless books; they have come together in vast flocks of variegated feather, and have a charm which the domesticated volumes of the library lack.”
Virginia Woolf ‘Street Haunting: A London Adventure’ (1930)

I own a lot of second hand books but the for the most part I know little or nothing about where they came from or who their previous owners were. Some have tantalising clues about their former lives. Book plates are rare but inscriptions quite common (‘To Patricia, I’m sure you will love this, Thomas Croatia 1987’) or the owners name (surely only people who possess a handful of books can be bothered to write their names in them?). I’ve found letters in second hand books (though nothing very exciting), shopping lists, newspaper clippings and pressed flowers. Some have library markings showing that they once belonged to Midwestern universities in Idaho or Ohio, or public libraries in Leeds or Bristol, before they were retired from active service. It is often ex library stock that most often has pencilled or, sacrilegiously, inked marginalia from readers who feel obliged to record their responses to the text (“What rot!” “is this true?”). These are nothing more than tantalising hints though into what is otherwise a book’s lost history. 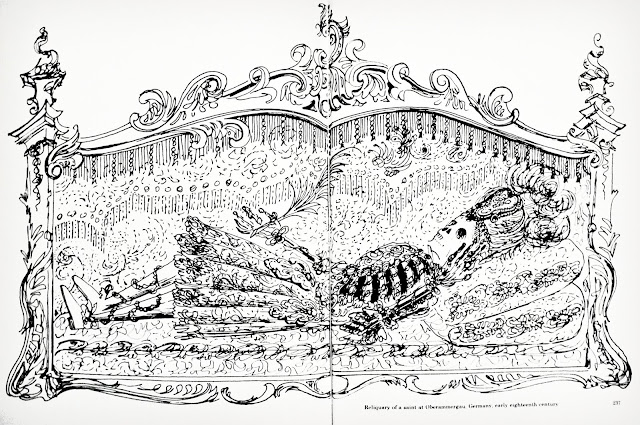 In contrast I know a lot about the past of my copy of Barbara Jones’ ‘Design for Death’. It is a first edition published by Andre Deutsch in 1967 which sold, according the price on the inside cover, for what would have a rather steep 63 shillings (or 3 guineas in posh money). That is equivalent to about £48 now, which incidentally is about what it would cost you now to buy a decent second hand copy of it (few books retain their monetary value over half a century). It was bought by Michael Gray, a young antique dealer from Marlborough. Michael was quite a well-known character in Wiltshire; he was born above the family emporium, Duck’s Toy Shop in the High Street, and briefly worked as a solicitor’s clerk in Bristol after leaving school before returning home to make his living as an antique dealer. He published at least 3 books of local history, archive photographs of the Marlborough area and was a pioneer conservationist who was appalled at the destruction, in the name of progress, of the towns physical fabric in the 1960’s and 70’s, much of it at the hands of the local council.  In 1982 he succeeded in persuading the local authority to save the threatened 17th century Merchant’s House in the high street and preserve it for future generations; it is now one of Marlborough’s best-known buildings. Michael’s copy of ‘Design for Death’ ended up on my bookshelf after he died in late 2018. Michael’s son Sam is a colleague of mine who happens to know of my strange obsession with death related material. He spotted it while sorting through his father’s effects and very kindly extracted it from the large pile of books destined to be sold as a job lot to a book dealer to give to me. I’m very grateful for the gift because this is a wonderful book which I had never heard of.

I hadn’t of Barbara Jones either, despite her being a contemporary of John Piper, Edward Bawden, Eric Ravilious and Edward Ardizzone at the Royal College of Art and often mentioned in the same breath. Women artists often struggle for recognition and she certainly was no exception to the general rule. She was born in 1912 in Croydon in a comfortable middle-class household. Her father had a saddlery and harness business in the days before the internal combustion engine finally replaced equine muscle power. She studied at Croydon High School and Croydon Art School before escaping the South London suburbs forever at the Royal College of Art where she graduated in 1937. After graduation she worked part time as a teacher at the Royal College whilst simultaneously trying to build a career as a commercial artist. During the war she was heavily involved in the Recording Britain project and after the war she created murals for the 1946 Britain Can Make It Exhibition and worked for P&O painting murals on their cruise and passenger ships. She had an enormous love of British vernacular art and in 1951 curated the influential Black Eyes and Lemonade exhibition of folk art at the Whitechapel Gallery. The exhibition featured horse brasses, corn dollies, canal boat and fairground artwork, ship's figureheads, and the outfits of Pearly Kings and Queens. Following the success of the exhibition she produced her first book ‘The Unsophisticated Arts’ which featured her own drawings of material drawn from taxidermy, fairgrounds, canal boats, seaside, riverside, tattooing, food decoration, waxworks, toys, rustic work, shops, festivals and funerals. She went on to publish works on follies and grottoes, English popular art during the first world war, erotic postcards and, in 1967, Death. 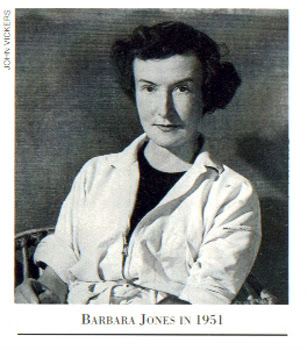 One of her close friends was Rose Macaulay and whilst Barbara might not have been as consummate a stylist her prose is lively and idiosyncratic and just as good as her illustrations. Her opening paragraph gives a hint of what is to come:

Everyone dies. For thousands of years, uncountable millions of corpses have been given funerals, and the living have always been faced with the problems of valedictory ceremonials for the dead and what to do with the corpses. Most of the have been buried, burnt, preserved, put in the sea, or exposed to the air. Quicklime, acids, eating, and shrinking are more rare, and on the whole the overtly scientific methods go with unnatural death, so that earth, air, fire and water are the most common agents of disposal.

‘Design for Death’ is concerned with the physical culture surrounding death, and for that reason it is a companion volume to ‘The Unsophisticated Arts’ (the last chapter of which was devoted to funerals). “The intention of this book,” she says unashamedly, “is to look mainly at the things made today or recently in England or the United States. The other things are here for comparison, or because I like them; liking is the hard base of everything, so I have drawn what I like.” There are handful of photographs in the book and a few illustrations culled from coffin makers catalogues but other than that all the pictures in this copiously illustrated tome are her own. As she says (and despite the insistence that most of her examples will be drawn from England or the US), she draws whatever appeals to her and that includes cheap floral arrangements, shrunken heads, catafalques, Congolese anthropoid coffins, shrouded corpses, hearses, tombs, Mexican calaveras and English beer mugs. She is not much impressed by modern funerary culture (and it hasn’t got much better since the 1960’s) “The artefacts…are now badly designed. It is easy to understand why; people are less interested in death than they used to be.  In primitive societies, death is accepted and respected; it is everywhere…..  In small settled communities acceptance gets weaker, but since nothing much happens there in peacetime except farming, death has high entertainment value. Urbanisation finally kills acceptance, and today death is hardly talked of, is indeed seen as top tabu subject…” 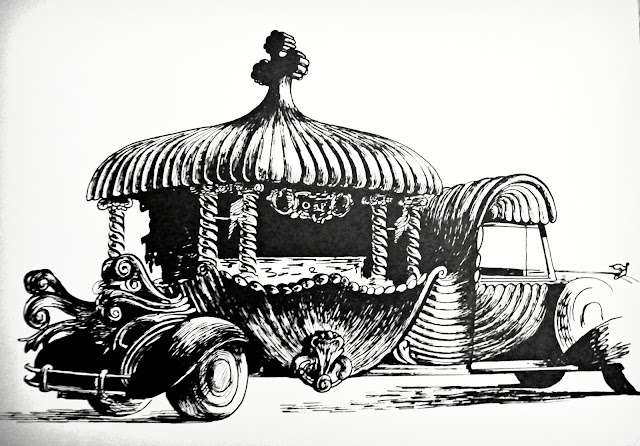 A glance at the contents page tells you that the book has chapters on the Corpse, the Shroud, the Coffin, the Hearse and the Undertakers Shop, the floral tributes, printing and the word, the Procession, the Cemetery and the Crematorium, the Tomb, Relics and Mementos, where death gets you and, finally, Loving Death. I can’t recommend this book highly enough and I’m clearly not the only one who rates it if a copy costs £50. I can’t resist one last quote, Jones’ trenchant observations on the modern cemetery;

Necropolis is metropolis, smaller. There is the old centre with a temple, trees and avenues, clot and space together, hundreds of houses built individual and expensive, and the mellow air of fixed habitation. Metropolis has a newer, meaner, conglomeration around the railway station; necropolis has a newer conglomeration around the crematorium or a new gate. Both of them have mean reduced suburbs on the outskirts, thousands of little houses only distinguished by the name on the gate and at some seasons by the flowers in front. The only difference is that the metropolitan suburbs are pink with occasional green pantiles and the necropolitan ones are white with occasional green chips. 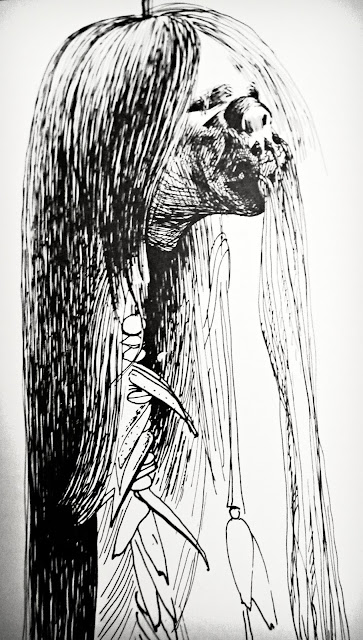