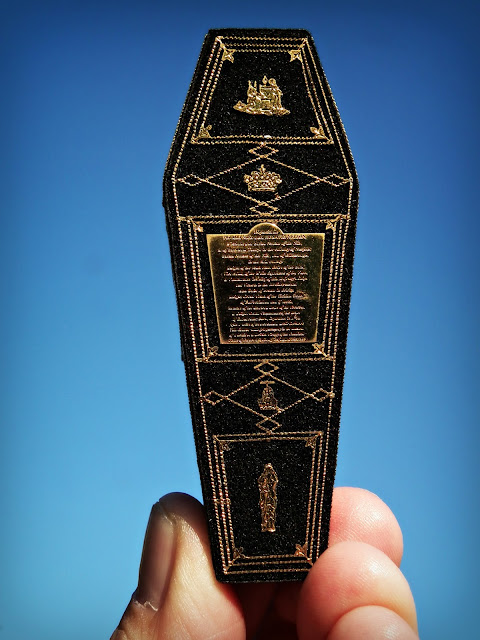 A few months ago I had an hour to kill waiting for my daughter who had an interview at Westminster College on the Grays Inn Road. With nothing better to do I wandered aimlessly around the nondescript side streets bounded to the south by Theobalds Road and to the North by Guildford Street. There was little to attract my attention until on Lambs Conduit Street I spotted the premises of A. France & Son, funeral directors.  The shop fronts of undertakers are generally rather disappointing – the art of window dressing has passed the profession by and for the most part funeral directors premises try to look as professional and non descript as a solicitors or accountants office.  A. France & Son have been in business since the late 18th century and have been at their current premises since 1898.  Their window display draws on their rather distinguished history and features a dusty model of HM Victory, some old prints of Nelson’s funeral and a miniature model of the admiral’s state coffin which was produced by the firm in 1805. A note, dated 2005, attached to the replica of the coffin told me that it was one of a limited edition made from oak from HMS Victory produced by the model maker Lucy Askew.
For some reason I immediately wanted one of those replica coffins and was furious with myself for only stumbling across it years after it had probably been sold out. Still, that is what ebay is for and at the first opportunity I googled ‘replica Nelson’s coffin’ hoping to find a second hand one for sale. The search brought up Lucy Askew’s website which still had details of the coffin and said they were  for sale at £100 a piece. I emailed Lucy hoping she still had one or two coffins left as she hadn’t removed the details from her website.  The next day Lucy confirmed “Yes I do have a Nelson's coffin for you. I still have some of the Victory oak I bought back in 2005 and I occasionally make up a small batch of coffins as and when people want them. I wonder if you are the same David Bingham who bought one from me some time ago? I am now up to number 228, though numbers 94-98 were never taken up for some reason so you could choose one of these if you prefer. I never thought I'd make so many!”  I immediately placed an order and told Lucy that “intriguingly I am not the same David Bingham who has already bought a coffin from you. It’s not that common a name and so quite surprising that two of them would go for a niche item like a model coffin.” 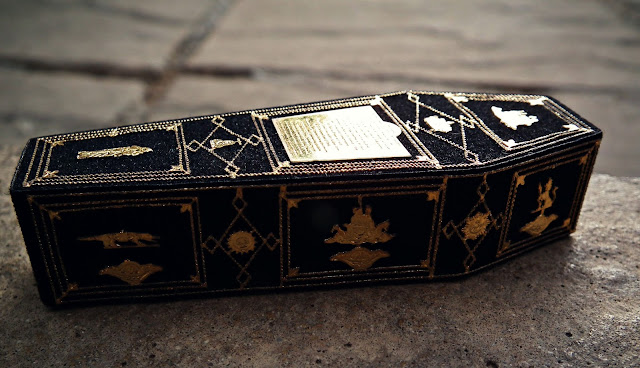 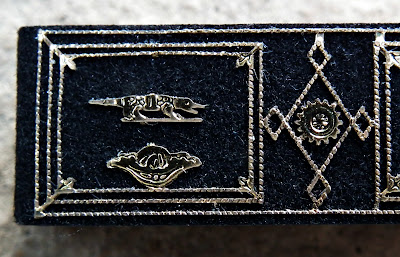 It only took a few days for my 8cm black and gold coffin to arrive in its tasteful presentation box lined with satin, along with a certificate of authentication for the Victory oak and an In Memoriam booklet containing a ‘collection of newspaper reports, eye-witness accounts and contemporary images of Nelson's extraordinary state funeral, and captures the astonishing outpouring of public grief which followed the news of Nelson's victory and death at Trafalgar two hundred years ago.’ I had had it sent to the office and was so thrilled with it that I reinforced my reputation amongst my colleagues for being slightly odd by showing it to anyone I thought might take even a passing interest in it. Someone produced a magnifying glass to allow us to read the minutely worded inscription on the coffin plate – engraving in writing far too tiny for my naked eyes to decipher even if I held it just a few inches from my face.  Lucy Askew politely emailed to ask if I had received my coffin and mentioned that ‘strangely I had another order for a coffin yesterday from an American professor (not called David Bingham) who had also spotted it in Messrs. France, Lamb's Conduit street. They have had it in their window since I gave it to them in 2005, but I haven't had an order for ages. There must be something in the air!’


I am drawn to the coffin because it is a coffin rather than because of any association with Lord Nelson but the old Sealord has found himself in the news again in the last couple of weeks.  The journalist Afua Hirsch wrote a comment piece in the Guardian of 22 August arguing, in the wake of the controversy in the US over Confederate statues, that we need a similar purge of proslavery and white supremacist icons in the UK and suggested that we start with Nelson’s column.  She claimed that Nelson “used his seat in the House of Lords and his position of huge influence to perpetuate the tyranny, serial rape and exploitation organised by West Indian planters, some of whom he counted among his closest friends.” She says that “the enormous contribution of black people in Britain at the time – especially activists and writers who were slaves themselves – has no equivalent site of glory, in London or anywhere in the country” but that “the colonial and pro-slavery titans of British history are still memorialised: despite student protests, Oxford University’s statue of imperialist Cecil Rhodes has not been taken down; and Bristol still celebrates its notorious slaver Edward Colston.” Hirsch is a seasoned controversialist – she will be under no illusions about the chances of toppling Nelson from his pedestal in Trafalgar Square but the UK’s refusal “in our inertia, arrogance and intellectual laziness” to face up to the legacy of its colonial past infuriates here and she points out that in the US at least these matters are being debated.
Hirsch had already allowed the ‘topple Nelson’ proposal a dry run on Twitter and so would have been aware of how much heat her possibly tongue in cheek proposition could  potentially generate. Even so she must have been surprised and gratified at the scale of it; the piece appeared Guardian on-line published her piece at 06.00 BST on 22 August, opened it for comments at 08.00 and closed it again at 9.20 after 1070 separate comments had been made. When the Guardian readers stopped talking the newspapers took over with the usual suspects, the Mail, Express, Sun, Mirror etc all weighing in to condemn the ‘revisionist’ Hirsch for daring to contemplate meddling with British history. There is not much of a debate going on in all this discussion – the commentary is all pretty much one sided and Hirsch’s proposal is uniformly ridiculed. The strength of the reaction to Hirsch’s suggestion makes it abundantly clear that the past is integral to the British view of the present and the dead crucial to our understanding of the living. Would anyone seriously argue that the  material legacy of our imperial past, the statues, buildings, street names and so on do not represent imperial propaganda? Was not glorification of the empire was the whole point in putting them up in the first place? And if that is the case how should we approach these relics of the past in the Britain of today?
Posted by David Bingham at 09:56 No comments: