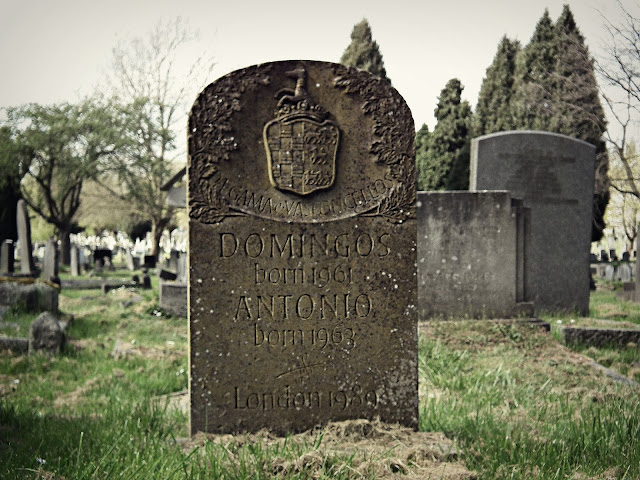 Phlebas the Phoenician, a fortnight dead,
Forgot the cry of gulls, and the deep sea swell
And the profit and loss.
A current under sea
Picked his bones in whispers. As he rose and fell
He passed the stages of his age and youth
Entering the whirlpool.
Gentile or Jew
O you who turn the wheel and look to windward,
Consider Phlebas, who was once handsome and tall as you

T.S. Eliot - The Wasteland
﻿
“25 years ago I had a couple of hook-ups with a guy. We met in Heaven and went back to my place first and then the following week we met at his place in Meard Street in Soho. He made me dinner. We had a fun time together. At his place he kept playing and dancing around to Express Yourself from Madonna's Like A Prayer album while he cooked me pasta. "I love this record", he said putting it on again. "You're not kidding!" He was almost obsessed with it. He made me laugh. He was a Portuguese banker and had more than one bottle of champagne in his fridge. Fancy, I thought! I was impressed. He was well-read too. A nice guy. Had a nice smile. His name was Antonio.”


“We talked about meeting for a third time. He had people staying that weekend though. How about in Comptons? His birthday was coming up and that Saturday night his mate was throwing him a party on a boat on the river. He said that I couldn't come as there were already too many people coming but we should meet the following day on the Sunday. Late though because it was going to be a late one on the boat. OK, Comptons it was. See you then. Look forward to it.”
Antonio de Vasconcellos never made it to his third date with Jonathan Green back in August 1989. Jonathan went to Heaven “feeling a bit miffed I couldn't go to what looked to be a wild party on the river.” In the club, at 2.30 in the morning, he started to hear rumours that there had been some sort of disaster on the river, that a boat had gone down and that bodies were being pulled out of the Thames. He decided to go home “but to my shame it was only after I had got on the N19 night bus on the way home it suddenly dawned on me, "Fuck! Antonio! Antonio was on the river tonight!" I got off the bus at New Oxford Street and dashed back to Meard Street. The lights were on on the second floor and I rang the buzzer but no one answered the door. I rang again. I pressed the buzzer for a full minute. No one was there….”

Sunday 13th August 1989 was Antonio de Vasconcellos’ 26th birthday and he celebrated it by throwing a river boat party the following Saturday, the 19th, for 130 friends on the Marchioness an unassuming 85 foot long pleasure steamer built in 1923. The Marchioness  had been one of the little boats of Dunkirk in 1940, sailing to pick up British and French soldiers trapped on the French coast by the advancing German army but by the late eighties the steamer spent its days plying the Thames between Westminster and Greenwich piers showing tourists London’s landmarks from the river and its nights as a party venue. Antonio’s evening had started off with an intimate dinner for 8 people, including his older brother Domingos, at his flat in Meard Street where they were later joined by 20 other close friends for cake and champagne before the whole group set off for Westminster pier where they joined another 100 guests on board the Marchioness. Although Antonio was a merchant banker by profession most of his guests had nothing to do with finance. Many of them were from the fashion world; models, photographers, make up artists and agents.  Antonio’s best friend and party organiser was Jonathan Phang a former male model who had opened a model agency with Antonio’s financial backing. Most of the guests were in their early twenties.
The party was in full swing at about quarter to two in the morning (some accounts claim revellers were dancing to the Hues Corporation 1974 hit ‘Rock the boat’) and the Marchioness was close to Cannon Street Bridge when some of the guests noticed that a 250 foot long, 180 ton dredger, the Bowbelle, was bearing down rapidly on them, looking like it might ram the party vessel. The collision, when it came, was not head on and might not have sunk the Marchioness if the Bowbelle’s anchor, sitting high on the prow almost at the gunwale, hadn’t caught the top of the pleasure steamer’s superstructure and then pushed it under the bow of the dredger. Experts later estimated that it took less than 30 seconds for the Marchioness to sink. Party goers on the upper deck were thrown into the water; the ones on the lower deck went to the bottom of the Thames in the sinking ship. 51 people died. 24 bodies were recovered from the sunken hull of the Marchioness, the rest were picked out of the Thames in the days following the disaster. Antonio’s was the last body recovered, 11 days later on 1st September. His older brother Domingos died but his younger brother, Diogo, survived, helping save the life of a fellow passenger. The bodies recovered from the river were taken to Wapping Police station which served as a temporary mortuary. All the survivors had been rescued by the crew and passengers on the Marchioness’ sister ship, the Hurlingham, and by river police; the crew of the Bowbelle did not pull a single body out of the water. Instead they sailed on and berthed upriver because the ship’s Captain, Douglas Henderson, as he later explained to a public enquiry, decided to concentrate on the safety of his own vessel and thought that "the best course of action was to get clear of the area." He admitted to the public enquiry that he had drunk six pints of beer the afternoon of the collision and then taken a three hour nap to sleep it off. He also admitted having lied to the police about the number of crew on watch. He told the police there were two but in reality there was only one. According to a report in the Guardian he agreed that “the ship's helmsman wore thick glasses and a hearing aid, but …. denied that this meant he could not see dangers or hear warnings clearly.” The Captain of the Marchioness was not able to answer questions at the public enquiry as he had drowned in the accident. The conclusion of the public enquiry was that both captains were to blame as neither had posted adequate look outs. Captain Henderson was prosecuted, twice, for his failings on the night of 20th August but was acquitted both times.


Antonio Pedro da Gama Lobo Salema de Souza e Vasconcellos was the son of João António Melo Trigoso De Sousa e Vasconcelos and his wife Maria (familiarly known as Boneca, doll, presumably for her diminutive stature and striking good looks), who had married in 1960 in what was then known as Lourenço Marques in the Portuguese colony of Mozambique and is now the capital Maputo. The Portuguese love to collect surnames, even the humblest person will have at least two, but a family which advertises its genealogy by hanging on to as many of its illustrious forebear’s surnames as it can usually has aristocratic pretensions, (even if they don’t actually have a title). João Vasconcellos brought his family to England, probably at some point in the late sixties or early seventies, and educated his three sons at Brompton Oratory and the best universities. He died in 1981 and is buried in the plot adjacent to his sons at Putney Vale Cemetery. His rather plain headstone features just his name, dates of birth and death and the carved outline of an artist’s palette and brushes. 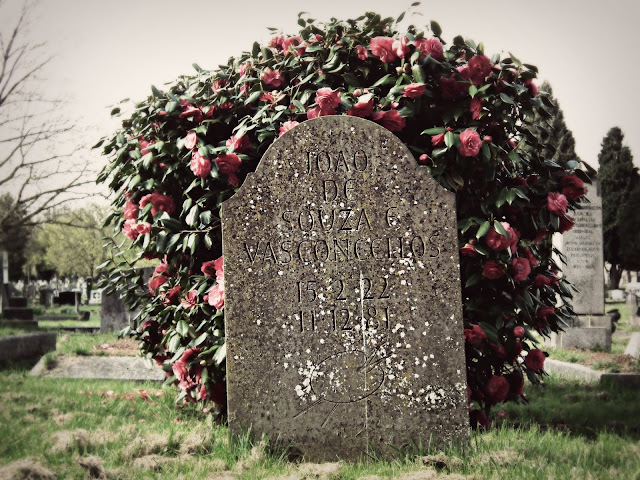 Antonio studied Economics at Trinity Hall Cambridge and went on to become a merchant banker firstly at Warburgs and then at Mercury Asset Management. In September 1988 he moved to take charge of Torras Hostensch London Ltd, working directly for the controversial Spanish lawyer and financier Francisco Javier de la Rosa. When the activities of Torras Hostensch were later scrutinised by the Courts, Lord Justice Mance remarked that Antonio “was paid the astonishing annual salary of £900,000.” His Cambridge friend Magda Allani, who survived the disaster, later said that at the time Antonio’s promotion had seemed to his friends the natural result of his brilliance, “but there was nothing normal about it. Any normal office handling resources of the magnitude of those at Torras’s disposal would have had a team of financial analysts. Instead, Torras Hostench London had just Antonio, his colleague Walid Moukarzel, secretary Elsa Garcia and a chauffeur. It didn’t feel right.” Javier de la Rosa has persuaded the Kuwaiti Investment Office to funnel $5 billion of investment through the London offices of Torras Hostensch with barely any oversight or scrutiny. How much Antonio was involved in the embezzlement of millions of dollars in Kuwaiti money no one will ever now know for sure but the lawsuit filed in London in 1993 by the US law firm of Baker & McKenzie on behalf of the KIO seems to indicate that along with Walid Moukarzel, Elsa Garcia and the chauffeur, he was probably an unwitting dupe. The £900,000 salary was perhaps to discourage him from using his keen intellect to look to closely into the deals he was asked to sign off. According to the New York Times the 1993 suit contended “that through the use of various shell companies, fictitious loans, fraud and embezzlement, the former Torras management conspired to steal at least $500 million between May 1988 and May 1992.” Lord Justice Mance agreed. Magda described Antonio as seeming ‘troubled’ in the days before his death, unsurprising given the scale of the fraud going on in the office he was nominally in charge of. 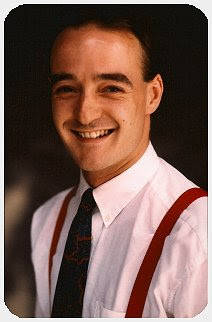 Antonio’s job and his astonishing salary inevitably led to him, and his fashion conscious guests, being labelled as yuppies and beautiful young things by the media. In Margaret Thatcher’s deeply divided Britain there were few terms as corrosive as ‘yuppie’ and public support for the victims of the Marchioness disaster was in distinctly short supply. Homophobia also played a part as many of the victims were gay. Some blamed the lack of public sympathy on compassion fatigue because in the 2 year period between March 1987 and April 1989 a staggering 765 people had died in 6 large scale incidents in the UK; March 1987 the capsizing of the Herald of Free Enterprise (193 dead)  November 1987 the Kings Cross fire (31 fatalities), July 1988 the Piper Alpha oil rig fire (167 deaths), December 1988 the Lockerbie bombing (243 dead) and the Clapham Junction rail disaster (35 dead), and in April 1989 the Hillsborough disaster (96 dead). A common reaction to the disasters was the setting up of a fund to help the victims and their families. In their first year the fund set up for the victims of the Herald of Free Enterprise disaster collected £3.4 million and the Hillsborough disaster relief fund collected £3.5 million. In quite shocking comparison the Thames River Boat Disaster Fund set up for the victims of the Marchioness collected, in its first 12 months, a mere £55,000. Antonio Vasconcellos may have been by most people’s standards well off, as were some of his guests, but many others were not and public opprobrium and financial hardship must have been bitter pills to swallow after the traumatic events of the night of 19th August 1989. 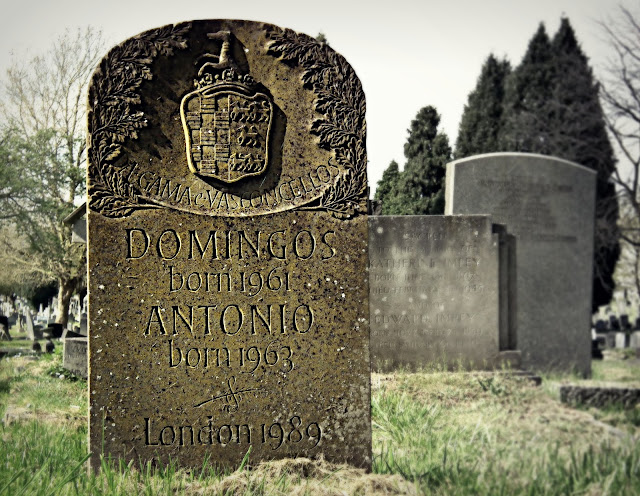