It's not about the money!; Plumstead Cemetery, Wickham Lane, SE2 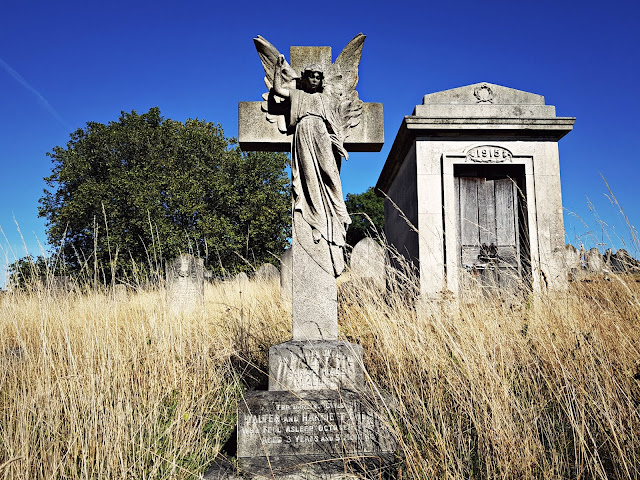 Clergyman, n.  A man who undertakes the management of our spiritual affairs as a method of bettering his temporal ones.
Ambrose Bierce "The Devil's Dictionary" (1911)


The first funeral at Plumstead Cemetery took place on Friday 27th June 1890. The deceased was 39 year old Dr. Henry Smith, the son of Mr E.T. Smith, the chairman of the Plumstead Burial Board, who pulled strings to get his son buried in the new cemetery, even having to get special dispensation from the Home Secretary, as it was not yet officially open for business. Henry had been unwell for some time. He had been given leave of absence for three months from his job as the Analyst for the Woolwich Health Board (where his older brother was the Medical Officer) back in January. His used his leave to travel to the South of France where he hoped the climate would be beneficial for his failing health. He had initially become ill two or three years before, after working at the Hospital for Consumption in Brompton and was presumed to have contracted tuberculosis from a patient. A long stay in the Midi under the care of his sister did nothing to improve his consumptive lungs. The week before he died, “feeling the king of terrors near”, as the Kentish Independent put it in his obituary, he set out with his sister to return to England. He made it no further than Paris where his alarmed sister sent a telegram to her father and older brother, asking them to come at once. Mr E.T. Smith and his eldest son took the first train to Dover where they were greeted with a further telegram letting them know that poor Henry was already dead. He returned to England in a lead lined French oak coffin with black iron handles and a brass nameplate with the inscription ‘Henri Smith Juin 20 1890’, arriving at the Woolwich Arsenal station on the Tuesday morning and being taken to his father’s house at the top end of Burrage Road in Plumstead. On Friday, at 2.30 in the afternoon, the coffin was taken back down Burrage Road in an open carriage to Holy Trinity Church in Beresford Square, Woolwich, where his father had been a worshipper for more than 50 years. The mourners, who followed in plain broughams, included members of the District board, the burial board and the Vestry, took part on a special service arranged by the Reverend Horsley. After the service the cortege reforme and made its way up to the new cemetery where another short service was held in the brand new mortuary chapel. At the grave side the choir sang the hymn “Now the labourer’s task is o’er” while the coffin was lowered into the ivy lined grave. 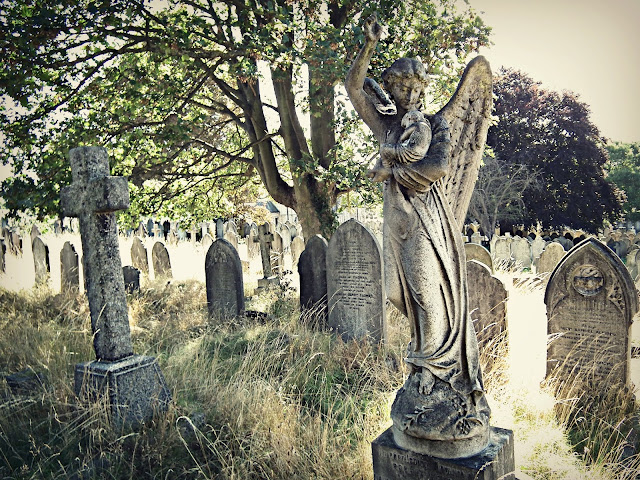 Like Charlton, Greenwich and Woolwich, Plumstead has a quietly spectacular hillside location. It is a relatively late cemetery, only opening as we have seen in 1890. Until then the town had managed to bury its dead in the churchyard of St Nicholas but rapid expansion had taken place in the 1880’s with new housing developed for the Royal Arsenal in Woolwich; burial space began to run out.  The parish burial board began to consider plans for a modern new cemetery but ironically ran into opposition from the Rector who preferred the option of acquiring a strip of land between the church and the road as an addition to the churchyard. There was a strong suspicion amongst the ratepayers of Plumstead that the vicar was more interested in his burial fees than in ensuring the decent interment of his flock. Shortly after the new cemetery was opened (28.06.1890) the Kentish Independent recalled why a new burial ground had been so important to the parish;

Proposals are already under consideration of the Home Office for closing the old churchyard at Plumstead, and, although those who take the income from the churchyard can still point to an unused strip of ground next to the roadside, it is palpable that the grave space is already overcrowded to a fearful extent, and ought not to have thrust into it any longer the wholesale harvest of the dead. The authorities with whom action will rest will have presented them some astounding figures. It is just thirty years since the new portion of Plumstead churchyard was added to the older part. The new ground was but acre and half in area, and, therefore, sufficient for about 4,240 graves, but in the thirty years which have passed an average of five hundred persons have died per year, and nearly all the 15,000 bodies have been put under ground in this little spot. In the same time the eleven acres of Woolwich cemetery have been virtually occupied and a new cemetery provided. With fifteen thousand dead and decaying bodies opposite their windows, can we wonder at the people who reside near the churchyard fancying that the odours upon the evening air give them sensations of sickness? It may be all imagination and nonsense, of course, but, although we are taught that the earth is the speedy curer of all corruption, we take leave to conclude that there may be excessive conditions which render even this great law of nature nugatory and inoperative. Look with confidence to the Home Secretary for a peremptory closing of Plumstead Churchyard as soon as the fiat has gone forth for opening Plumstead Cemetery. 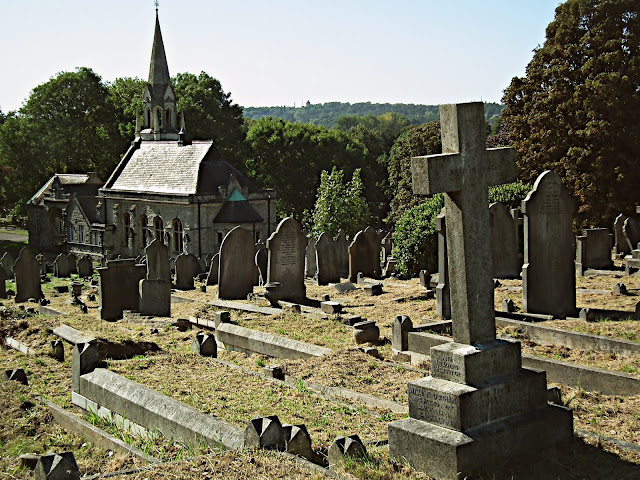 The burial board was asked to look at the possibility of opening a new cemetery in 1887 and given a two year deadline for acquiring one. “At the end of the first year they may be said to be making fair progress,” reported the Kentish Independent in January 1888 following a vestry meeting where the chair of the board, Mr E.T. Smith, had asked the vestry to sanction a loan of £7000 to purchase a “most convenient and suitable spot for their burial ground, picturesquely placed between Wickham Lane and the wooded heights of Bostall Heath, a site easily accessible from the town, and beautiful to look upon.” More controversially Mr Smith outlined the board’s plans to have just one mortuary chapel to serve all denominations “as this appears to be the plan adopted in most of the modern Cemeteries the different creeds will probably soon adapt themselves to the arrangement, and the objections which at first sight present themselves will speedily disappear in practice.” On behalf of the board Mr Smith also dismissed what the newspaper dubbed ‘the Vestry Economists’, the faction that wanted the cemetery to be a profitable speculation for the parish. The Independent agreed with the board that it did not “favour the plan of doing a good business by competing for outside custom. We know that there are Cemeteries in the north and east of London which do this, and offer various inducements to attract funerals from distant places, but we do not want to see Woolwich and Plumstead the perpetual highway of wretched hearses and funerals of the lowest class, such as we see in other outskirts of the Metropolis. The Cemetery is for Plumstead, and, to keep it respectable, the people of Plumstead will not object to pay a sufficient fee, or even an extra farthing rate once a year to help in liquidating the loan.” What the newspaper did not make explicit was that the board had thrown down the gauntlet not only in lumping Anglicans in with the other creeds and refusing to allow them their own church in the cemetery but even more controversially it proposed to not consecrate any of the grounds. The objection of the board to consecration was not spiritual – they were all established churchmen to a man – but financial and in particular to the insistence of the Vicar of St Nicholas’ that he had a right to his full ecclesiastical fees for all burials in the new cemetery. 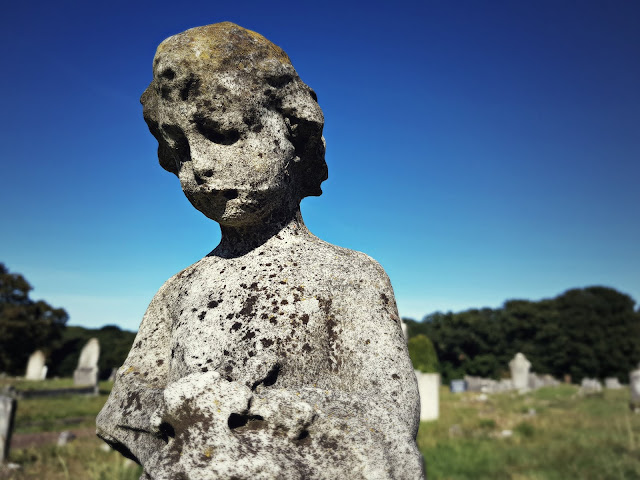 The board proved obdurate and resisted the vicar’s blandishments regarding the thorny issue of burial fees. They hoped by not consecrating ground within the cemetery they would neatly side step the controversy. But it merely allowed the vicar to seek the help of the Bishop of Rochester and portray the board as dangerous radicals who were keen to bury the dead of Plumstead in unconsecrated ground. The Kentish Independent returned to the fray in June 1890 when it reported that the Bishop of Rochester looked likely to get his way and that a “portion of the ground must be consecrated. From that ultimatum,” the paper noted “whether we desire or not, we cannot escape. The consequence will that the vicar of the parish and the sexton and clerk, if there be any, will be entitled to their fees just though the cemetery were the churchyard. This is not just. It may be right in principle to make these officials some recompense for the loss of income, but the matter is clearly one for compromise. In the case of Woolwich, we believe, the ecclesiastical fees were voluntarily reduced, and in Woolwich Cemetery an interment in a common grave costs but 10s. inclusive. In Plumstead Cemetery it is proposed to charge 9s for the interment and 14s. 8d. ecclesiastical fees, or total £1 2s. 8d. The 14s. 8d. is the full sum now paid in Plumstead Churchyard, and cannot, with any show of reason, be maintained in the cemetery where considerations of the ground and of services rendered are absent.” 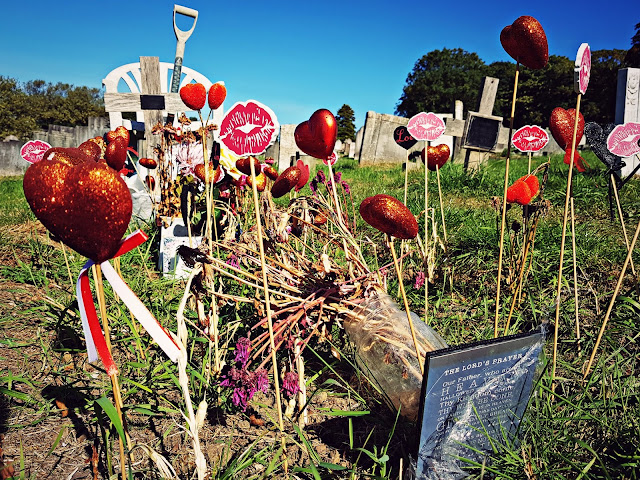 Although the chair had buried his son in the cemetery at the end of June, the formal opening took place on Tuesday 5th August.  The delay was “in consequence of objections to consecration” noted the Woolwich Gazette which covered the opening ceremony; “From the first the Burial Board, most of whom are Churchmen, have been opposed to consecration, chiefly on account of the privilege thereby conferred upon the vicar of charging ecclesiastical fees; but, after long resistance, the Board have found it impossible to maintain their position, and have had to submit the mandate of the Bishop of Rochester, requiring that a portion of the ground should be consecrated.” The official opening ceremony was conducted by the Bishop in the presence of about 60 people. The Bishop consecrated 3 acres of the site and after signing the order of consecration delivered a brief address. “He exhorted his hearers to look forward to death,” said the Gazette, “not with dread, but as the gateway to everlasting glory. Surely they would all recognise that in death there was a universal  ground of kindredship, and how much more must they recognise a still closer ground of brotherhood, in the hope of glorious eternity in Heaven.”

The rows about burial fees continued to rumble on. A year later the excessive cost of pauper burials at Plumstead forced the board to reduce its fees by 6 shillings but the stubborn vicar responded by a mere shilling reduction in his own fees. The Woolwich Gazette reported on 01 May 1891:

EXORBITANT BURIAL FEES. The Finance Committee drew the Boards attention to the disparity of fees paid for pauper funerals, viz : Charlton, 10s.; Woolwich, 9s. 6d.; Plumstead, 12s. 8d.; Plumstead Cemetery £ 1 3s. 8d, Mr, Kemp said he could not account for the figures named for Plumstead Cemetery. The pauper funerals always took place in consecrated ground, and the vicar's fee, over which the Burial Board had no control, was 14s. 8d. The Burial Board on the representation of the Guardians  had reduced the charge for ground in the case of pauper funerals from 9s. To 3s and it was understood that the vicar had agreed to reduce his fee to 12s 8d. The Clerk was directed to write to Mr Johnson for details of the charges. 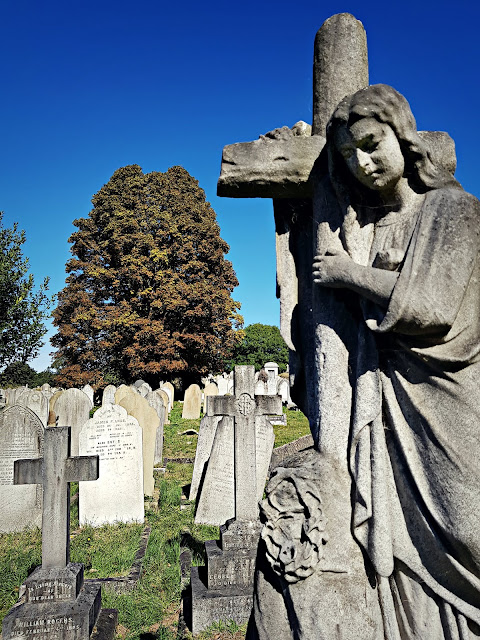