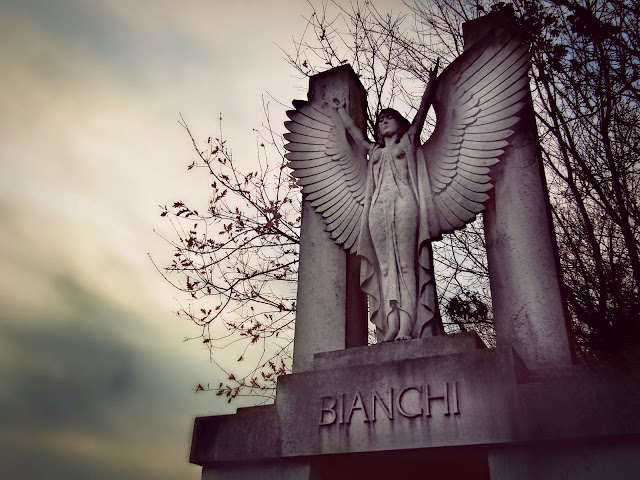 The splendid Grade II listed Art Deco Bianchi memorial was created by Cesare Bianchi for his wife Martha who died in 1936 giving birth to her second child. The memorial is set in a large triangular plot that had wrought iron railings and a gate until they were stolen by thieves in 2011. A futurist angel stands with wings outstretched over a gateway inscribed with the name Bianchi. On either side of the gateway are carved relief panels, one showing Martha ascending to heaven accompanied by wingless angels and the other showing Martha and Cesare, apparently reunited in the afterlife, sitting on a bench with Martha finally cradling the baby she presumably never got to hold before she died.

Martha Gall and Cesare Bianchi were born within a few months of each other; Martha, one of 9 children, in the small town of Insch near Aberdeen in 1897, and Cesare in 1898 in the village of Cernobbio on Lake Como in northern Italy. He first came to England in 1913 but as an Italian national was recalled to Italy after the outbreak of the First World War to serve in the Alpine Brigade of the Italian army as an interpreter. Italy had, of course, joined the war in 1915 on the side of the allies fighting against Austria and Germany. When the war ended Cesare returned to Britain and found work at the Palace Hotel in Aberdeen where he met Martha Gall. The couple were married in 1921 and had their first child Patricia the same year. Later they moved to London, where Cesare eventually became Head Chef at the Café Royal.  The family were living in Lawn Road in Hampstead when Martha tragically died in childbirth in 1936. The baby survived and Cesare started to raise his son Robert with the help of Martha’s older sister Mary and Robert’s older sister Patricia. The family barely had time to get over Martha’s death before the Second World War broke out. The entry of Italy into the war in June 1940 was a disaster for the family. Despite living for 27 years in Britain, fighting on the same side in the great war, and being a father to a young motherless family Cesare found himself interned by the British Government as an enemy alien and by the end of June he was in Liverpool waiting to board a boat for an internment camp in Canada, the British authorities apparently believing that only removal to another continent would ensure that the ex pat Italian community would be unable to help the Axis war effort.

On the 30 June Cesare joined 734 other interned Italian men on the SS Arandora Star (owned by Frederick Leyland & Co) along with 479 interned Germans and 86 German PoW’s, all bound for St John’s Newfoundland. The ship sailed unescorted and early in the morning of 2 July, having crossed to the north of Ireland, was 75 miles west of  Bloody Foreland in County Donegal and about to set off across the open Atlantic to Newfoundland.  Here she was spotted by U Boat U-47 commanded by Gunther Prien. The U boat was almost out of torpedoes and about to sail back to base when she picked up the Arandora Star. In fact all that was left in her guns was a single broken torpedo that had already failed to fire. Prien decided to give the defective missile one last chance and took aim at the enemy ship; this time the torpedo fired, detonating against the starboard side of the ship, flooding the engine rooms and immediately killing all the personnel there. There was chaos on board the sinking ship as sailors, military guards and the Italian and German internees fought to get on the lifeboats and life rafts, some of them falling from the bows in the desperate scramble. 805 people drowned including the ships commander, Captain Moulton, 12 ships officer, 42 crew, 37 military guards, 486 Italians and 175 Germans. Cesare survived and returned to Liverpool from where he was interned on the Isle of Man. He was lucky, many of the survivors were sent to Australia to be interned on an isolated camp on the Murray River for the duration of the war. When the authorities decided that Cesare was no longer a threat in 1942 and released him from internment the journey home from the Isle of Man was much easier than it would have been from South Australia. He re-joined his family in Hampstead where his sister in law had been looking after the children in his absence. He found work in catering, helping to develop frozen food in Smithfield Market and must have hoped that he could now quietly see the rest of the war out.
In June 1944 the Luftwaffe launched the first of their new series of weapons at London, the V1 flying bomb. By September the Nazi’s upgraded their long range weaponry to the world’s first long range ballistic missile, the V2. The V2’s trajectory and speed (a falling V2 can travel up to three times the speed of sound) made it invulnerable to the traditional defences of anti aircraft guns and fighter planes. Over the next seven months the Germans launched 1358 at London. Many either fell short or overshot the capital and exploded in relatively uninhabited areas of the Home Counties, particularly after November 1944 when British intelligence began leaking false information to the Germans implying that most V2’s were overshooting London by 10 to 20 miles. The V2’s that did get through killed an estimated 2754 civilians and injured many more. The last casualty was killed in Orpington on March 27 1945. Just three weeks earlier, at 11.30am on March 8, a V2 hit Smithfield Market. The rocket breached the market buildings and punched through the floor, entering into the subterranean railway tunnels beneath before exploding. The huge explosion, heard all over London, created a huge crater into which the market buildings collapsed. 110 people died, not just market workers but women, many of them with their children, who were queueing to try and buy from a consignment of rabbits that had gone on sale that morning. Cesare was amongst the dead and if that wasn’t bad enough for the Bianchi children, so was Mary their aunt.
Cesare was buried with other victims of the V2 in the City of London Cemetery in Manor Park.  He would have certainly wanted to be buried with his wife but the circumstances of his death made that impossible. Mary Gall’s place of burial is not known.

I would like to thank Jon Gliddon for allowing me to use the results of his genealogical research in this post and Robert Bianchi for permission to use his parents photograph's and for providing additional information about them. 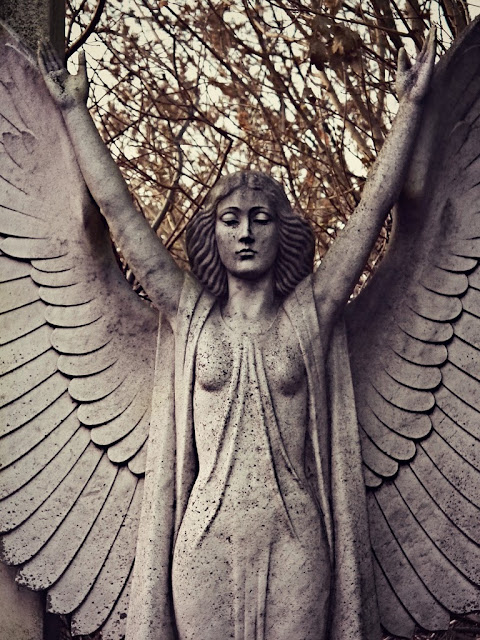