Joseph Wilton and the body snatchers of Wanstead - St Mary the Virgin, Wanstead 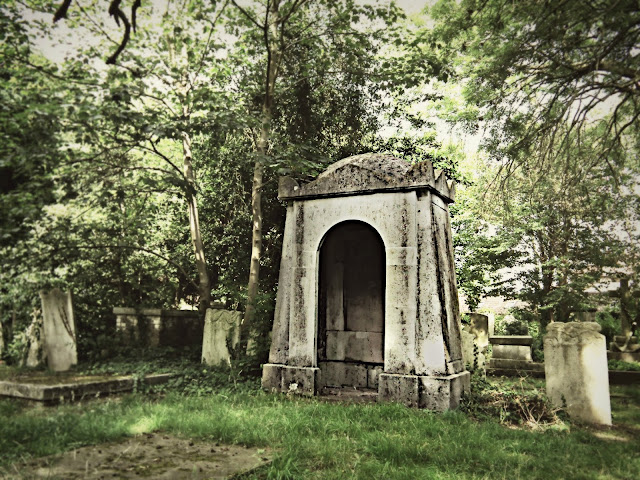 About 1830 the parish instituted an armed watch against body snatchers. The watchmen used the vestry room in the church until 1831, when a sentry-box was erected in the churchyard. This was presumably the stone box, given in memory of the Wilton family, which still stood there in 1971.

It may be an east London suburb now but early 19th century Wanstead was deep in the depths of the Essex countryside and too far away from the hospitals and anatomy schools of London to suffer unduly from the depredations of resurrection men. There would have been a trade off for the body snatchers between the ease of obtaining fresh corpses and the difficulties of transporting bulky and illicitly plundered cadavers from their source to their final destination in Guy’s or St Thomas’ Hospitals. There certainly would have been less vigilance in the churchyards of somnolent Essex villages but this would have been offset by the additional risk involved in moving a dead body eight or nine miles to London. The villages of the Essex borders suffered considerably less body snatching than the parishes of the City of Southwark but the theft of freshly interred corpses was not entirely unknown. On the 26th October 1824 the Morning Chronicle reported on a raid carried out in the churchyard of St Mary the Virgin a few days previously:

Resurrection Men - On Friday night, some of these wretches made a daring attempt on Wanstead Church-yard, and in part succeeded. They first got up the body of a child recently interred and afterwards the body of a female which they placed on the edge of the grave; they then commenced on the grave of the parish beadle, and had made some progress, when they were fortunately disturbed, and made their escape with the child only. These fellows are supposed to be the same gang that last year opened a grave in Chingford churchyard from which they took a patent iron coffin, broke it in pieces and carried away its unconscious tenant.

The traumatic night of 26th October 1824 is the only instance of grave robbing in Wanstead that I can find in the newspapers. If it was and the Victoria County History is right, it took the good burghers of Wanstead 6 years to react and set up an armed watch against body snatchers. If they ever did use the stone ‘sentry box’ (which is debateable, as it’s not a sentry box at all but a tomb) they didn’t use it for very long. In 1832 Parliament passed the Anatomy Act, allowing doctors, teachers of anatomy and bona fide medical students access to the unclaimed corpses of people who had died in hospitals, prisons or workhouses. Overnight resurrection men and burial ground watch men found themselves redundant including the putative armed watch of Wanstead. If the watch had ever used the Wilton tomb as a sentry box it was pretty disrespectful of them. The monument had been built in the early 1800’s as a memorial to the sculptor Joseph Wilton who died on the 25th November 1803;

DIED - On Friday last, at Somerset House, after a lingering illness, aged 85, Joseph Wilton, Esq. Royal Academician, Sculptor to his Majesty, and Keeper of the Royal Academy. His works at Westminster Abbey, &c. evince his extraordinary excellence in his profession.

Joseph Wilton was born on 10th July 1722 in Charing Cross. His father, William, was a plasterer who produced ornamental plaster works for architectural decoration. William was declared bankrupt in 1728 when Joseph was 6 but soon bounced back and became a hugely successful and wealthy supplier of not only plaster but papier mâché which was produced in a factory in Cavendish Place which, according to Nollekens’s biographer J. T. Smith, employed ‘hundreds of people’ making ornaments for chimneypieces and mirrors. William was successful enough to acquire a substantial country property at Snaresbrook. Joseph was initially educated at Hoddesdon in Hertfordshire and destined to be a civil engineer but as is often the way he showed an early taste and talent for the arts. As his father effectively made his living in the arts he objected less to his son’s proclivities than fathers generally do in this scenario. In fact he arranged an apprenticeship as a sculptor with the Belgian sculptor Laurent Delvaux who had recently left London to return to his native Brabant. Wilton left Delvaux in 1744 to study in Paris at the French Academy where he won a silver medal and the lifelong friendship of fellow sculptor Louis François Roubillac. In 1747 in company with Roubillac he travelled to Italy, first to Rome where he spent 3 years and won a gold medal from Pope Benedict XIV, and then onto Naples and finally to Florence where he spent 4 years. He returned to England in 1755, living with his father in Charing Cross and becoming a much sought after sculptor. He was appointed state coach carver to the King (one of the coaches he worked is still used in state ceremonials) and shortly afterwards sculptor to his majesty. He was a founder member of the Royal Academy and a contributor to its first exhibition in 1769. And then, abruptly, he gave up working. His father had died the previous year and coming into his rather extensive inheritance Joseph decided that he preferred to spend his time in idle dissipation rather plying his mallet and chisel. It took him a little less than 25 years to burn through the fortune that his father had taken a lifetime to accumulate and he was declared bankrupt in 1793. He was saved by his friends in the Royal Academy who had him appointed as keeper and provided him with apartments at Somerset House where he died in 1803. He was buried in the churchyard of St Mary’s Wanstead and later a memorial was erected in the form of a Grecian aedicule of Portland stone with battered sides, incised panels, a round-arched entrance and domed top with corner acroteria. Some say it was modelled on the entrance to the Holy Sepulchre in Jerusalem but most people continue to think it resembles a sentry box and never realise that it is actually a tomb. This is probably why the interior is heavily festooned with graffiti, some of it dating back to the 19th century often overlaid with more modern efforts from the likes of Caspar & Django (2010), Alan Measles and Zeus.