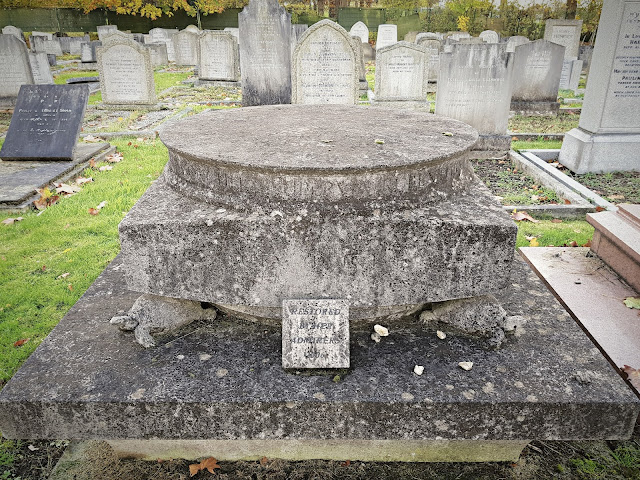 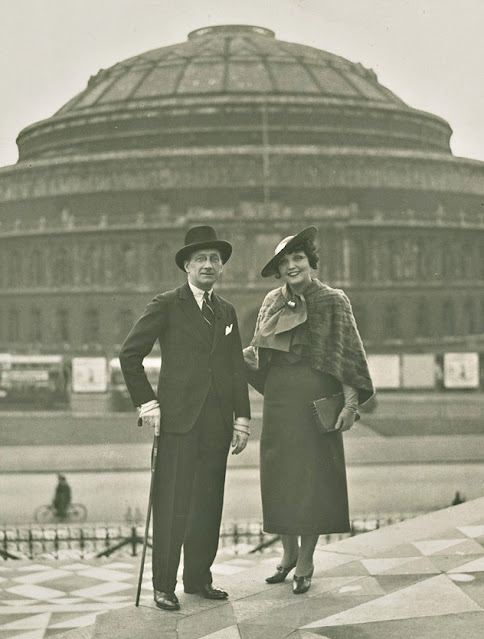 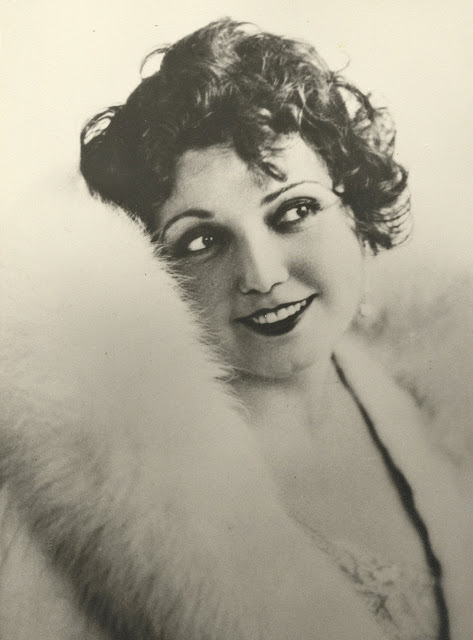 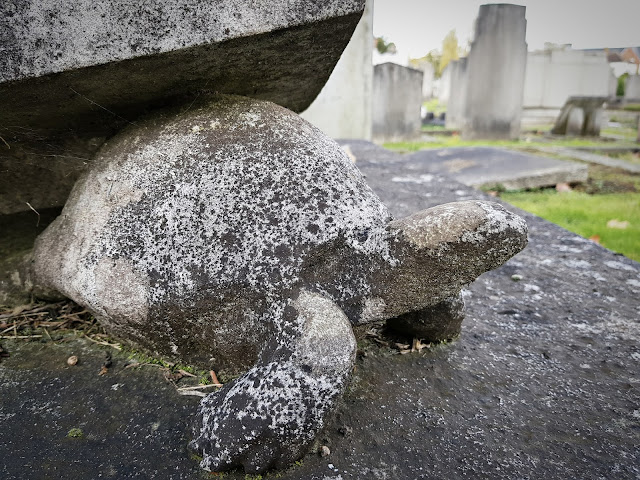 An Unsuitable Job for a Woman; Hester Hammerton (1711-1746) All Saints, Kingston-Upon-Thames 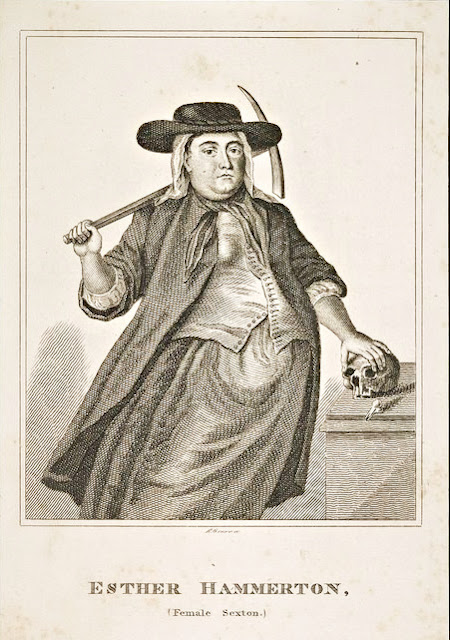 I came upon an account of the life of Hester Hammerton, the once celebrated female sexton of Kingston-upon-Thames in Kirkby’s Wonderful and Eccentric Museum. For those unfamiliar with this publication it is an early 19th century compendium of the marvellous and the bizarre; it contains biographies of the singular characters of the age (the Chevalier D’Eon and Joseph Merlin for example), accounts of calamities, (shipwrecks, volcanic eruptions, earthquakes etc), details of monstrous births, (four legged cockerals, two headed calves and numerous conjoined twins), prodigious eaters (a polish man who regularly ate 5 pounds of raw beef and 10 tallow candles at one sitting) and stories of miraculous escapes from death (Elizabeth Woodcock of Impington who survived 8 days buried alive in snow). Whilst written to appeal to the sensation seeker it has to be conceded that its articles are generally well informed and that its contributors often took pains to establish their facts.

Kirkby’s tells us that Hester Hammerton was baptised on March 16 1711. Her father Abraham performed the office of sexton of All Saints Church “in which his daughter was accustomed to assist him.” Hester and her brother-in-law Thomas German were both with their father on the 2nd of March 1730, digging a grave for a Mr George Hammond of London. Also present were Richard Milles and Sarah Smith. They were digging too close to one of the main pillars of the Chapel of St Mary; the vicar Dr Rawlinson, explained in a letter to a friend exactly what happened next:

On Monday last, our sexton, with his son and daughter, being employed in digging a grave, part of the ancient chapel of St Mary’s fell in upon them, killed the sexton and one other man, Richard Mills, on the spot, bruised and wounded several others and buried in the grave both the son and daughter for above three hours, during which time many were employed in digging out the rubbish, in order to get at the bodies that were buried. After the removal of the timbers, and several loads of rubbish, they heard very plainly some loud groans and cries in the grave. Soon after, they came to the heads of two persons: the man was speechless and almost dead, having his head closely confined between two stones; the woman was not so much pressed; but being immediately taken care of by Dr. Cranmer, they are both in a fair way of recovery. The Bailiffs and Churchwardens by their great humanity and diligence on this occasion had a great share in preserving the lives of the two persons abovementioned, by the speedy removal of the rubbish and by keeping off the crowd who pressed in upon the labourers in great numbers. The damage besides the lives already lost is computed to amount to above £1000.

Abraham Hammerton and Richard Milles were both killed on the spot but the vicar was writing too soon to know that Sarah Smith would also eventually die of her injuries. Abraham and Richard were both buried on the 5th March, Sarah was not buried until the 15th. Hester and her brother-in-law Thomas both survived and Hester inherited her father’s position as sexton to the parish though luckily her injuries prevented her first job being the melancholy one of digging her own father’s grave. Kirkby’s describes Hester as a ‘strong, lusty woman of a comely countenance.’ It claimed that injuries received in the accident prevented her from ever wearing stays again and says that ‘her usual dress therefore was a man's waistcoat and hat, a long loose gown and a silk handkerchief tied round her neck.’ On Sundays she would bow to convention and ‘dress extremely clean and neat, in a gown of the then fashion, a mob cap with frilled border and ribbon, and a nosegay in her bosom.’  The writer says that Hester ‘was very fond of all kinds of manly diversions, such as cricket, football, bull baiting, also of smoaking and associating with men but nevertheless, she preserved her moral character unimpeached. If any person offered to take liberties with her, she never failed to resent the affront and her fist inflicted merited chastisement on the offender. She possessed great bodily strength and would dig all the graves and ring the great bell herself. She died at Kingston and was buried February 28 1746 in the 35th year of her age.’

Hester was instrumental in apprehending Philip Wilkinson and William Sweet, two Londoners who came down to Kingston with the intentions of robbing the communion plate from the church. Hester wandered into church to ring the two o’clock bell and found the two men ripping off the gold lace and fringe of the pulpit hangings. Incensed the doughty Hester grabbed one of the men by the collar and threw him over the reading desk and into the pew below. Whilst she was occupied the other thief crept up on her from behind and hit her over the head with a blunt instrument, stunning her and allowing both robbers to flee the scene. A few days later a boy was caught lurking around the church and suspected of being somehow being involved in the robbery. He denied this but said that if he was released, he would tell the authorities who had robbed the church. His information led to the capture and arrest of Wilkinson and Sweet. The pair were tried at Kingston Assizes on 10th April 1735 and being found guilty of sacrilege, sentenced to death.  The Derby Mercury of 17th April gives this account of their execution;

On Thursday, soon after One o'Clock, Philip Wilkinson and William Sweet, were executed in the Market-Place at Kingston. They said they forgave the Boy and the Woman who were instrumental in their Death; desired the Prayers of the Spectators; and just before they were turn'd off, declar'd, as they were dying Men, that they were innocent of the Fact for which they suffer'd, nor had they been guilty of any Robbery whatsoever; and that they never saw the Boy or Woman before they came to appear against them.

Kirkby’s gives the following postscript to the story;

The bodies of the above two men, after execution, were carried into the Castle Inn yard, and no particular account was given of them afterwards. As christian burial was refused them, on account of the crime of sacrilege, of which they had been convicted it was not till above seventy years afterwards that a discovery was made, which seems to clear up this matter. August 25 1807 - As some workmen were digging a hole in the garden of Mr. John Smallpiece the butcher, near Clattern-bridge (late Mr. Laming's garden) the skeletons of two men lying together were discovered. These were conjectured to be the remains of Wilkinson and Sweet. The garden in which they were found was a bowling green, and belonged to the Castle Inn, at the time when the bodies of those two men were left in the yard, and there is no reason to doubt that, as it was generally supposed, they were buried in that bowling green.

Posted by David Bingham at 10:37 No comments: