James John Berkley, born in Holloway in 1819 and dead in Sydenham at the age of 42 spent the best part of a decade in India building the first 20 miles of India’s celebrated railway network from Bombay to Tanna. He was most celebrated for the impressive feat of taking the railway into the Western Ghats but was dead before the first section of line was officially opened in 1863. Berkley trained and worked with eminent engineers such as George Bidder and George Stephenson both of whom recommended him for the job of Chief Resident engineer with the Great Indian Peninsula Railway. Ill health drove him back to England and an early death.

He left behind a young widow and five children; his youngest daughter was born posthumously.  At the Annual meeting of the shareholders of the Great Indian Peninsula Railway held at the London Tavern in  October 1862 Sir William Tite MP addressed his colleagues on the loss of their Chief Engineer he “was anxious to make a recommendation, that an acknowledgment should be made of their appreciation of Mr. Berkley’s services, that gentleman's death being, as he believed, mainly attributable to the influence of the Indian climate while engaged in carrying out the works on their line The directors proposed to erect a stone tablet to Mr. Berkley’s memory on the Bhore Ghat incline, hut he thought t it would be only just that they should make some provision for Mr. Berkley’s five young children. Mr. Berkley had insured his life, but he had not lived long enough to make adequate provision for those dependent upon him, and he proposed that the meeting should authorise the board to pay over to Mr. Berkley’s executors 1000/. for the benefit of his family.”

Berkley’s son, James Eustace, also became a railway engineer. In 1896 newspapers reported scandalous details of his divorce. The jury granted the wronged husband £1500 damages from Captain Hawkes but the plaintiff gallantly agreed not to enforce if Hawkes married the divorced Mrs Berkley:
DIVORCE SUIT. £1,500 DAMAGES. Divorce Division Thursday
James Eustace Berkley, railway engineer, living in India, obtained a decree nisi, and costs, in an undefended divorce suit, in which Captain Hawkes who was formerly stationed at Secunderabad, where petitioner and his wife resided. In 1894 respondent came to England on a visit to her mother. Co-respondent also visited England at the same time, and Mrs. Berkley wrote to her husband stating that she had met Captain Hawkes, with whom they had become acquainted in Secunderabad, and that she had been out fishing with him in his yacht. Subsequently she wrote stating that she had misconducted herself with Hawkes. By consent the jury awarded the petitioner £1,500 damages, but Mr. Berkley agreed not to enforce payment, provided Captain Hawkes carried out his intention of marrying the respondent within six months.
﻿
Posted by David Bingham at 16:14 No comments: 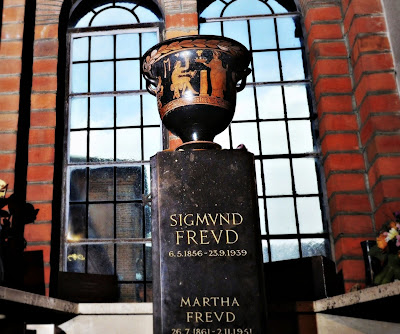 Sigmund Freud’s mortal remains had been on more or less constant public display in the Columbarium at Golders Green crematorium since 1939, without any mishap. On New Year’s Eve 2013 butterfingered thieves broke into the crematorium apparently intent in stealing Freud and his wife and the 2300 year old Greek urn that housed their ashes. No sooner had they laid their hands on the prize then it slipped from their grasp and smashed on the tiled floor of the columbarium. They fled leaving the crematorium staff to sadly sweep up Sigmund and Martha in a dustpan and brush on New Year’s day 2014. Detective Constable Daniel Chandler of the Metropolitan Police described the attempted theft as despicable, “leaving aside the financial value of the irreplaceable urn, and the historical significance of to whom it related, the fact that someone set out to take an object knowing it contained the last remains of a person defies belief."

Freud came to London in June 1938, fleeing the Nazi occupation of Vienna. The 82 year old Psychoanalyst was doubly loathed by the National Socialists for being Jewish and for his views on psychology. The regime harassed him, banning and burning his books and arresting members of his family and leaving the sick old man no choice but to flee the country with as many members of his family as he could take with him. His sisters, who remained behind, perished in the death camps.


Freud had been mortally sick for 15 years by the time he arrived in London. His addiction to smoking cigars left him with a malignant oral epithelioma that was first diagnosed in 1923. His doctor and friend, Felix Deutsch, lied to the worried Freud about the tumour in his mouth but shared the secret with a select circle of psychoanalysts including Ernest Jones. When Freud eventually discovered the deception he was furious, demanding to know “Mit welchem recht?”— “With what right?” Deutsch resigned his position as Freud’s personal physician to Dr Max Schur. Before arriving in London Freud went through more than 30 operations (one of which left him deaf in one ear), subjected himself to crude X-ray and radium therapies and was forced to wear an unpleasant denture like prosthesis to keep his oral and nasal cavities separated. This device stopped him from eating and speaking normally. None of the treatment halted the advance of the tumour eating away at his mouth and jaws or stopped Freud smoking (even though he tried many times). Freud adored his pet Chow Lün but the dog was so distressed by the stench of necrotic bone coming from his jaw that it howled and refused to stay in the same room. His daughter Anna nursed him through his final months in London but on September 21 1939 he could no longer stand the pain and begged his doctor to remember a conversation that had had many years earlier “My dear Schur, you certainly remember our first talk. You promised me then not to forsake me when my time comes. Now it's nothing but torture and makes no sense anymore.” After discussing the situation with Anna, Schur give Freud an immediate 25 mg injection of morphine and followed it up with another high dose 12 hours later. Freud went into a coma and died at 3 am on the 23 September and was cremated at Golders Green 3 days later.

Posted by David Bingham at 14:32 No comments: