Merry Christmas from the London Dead 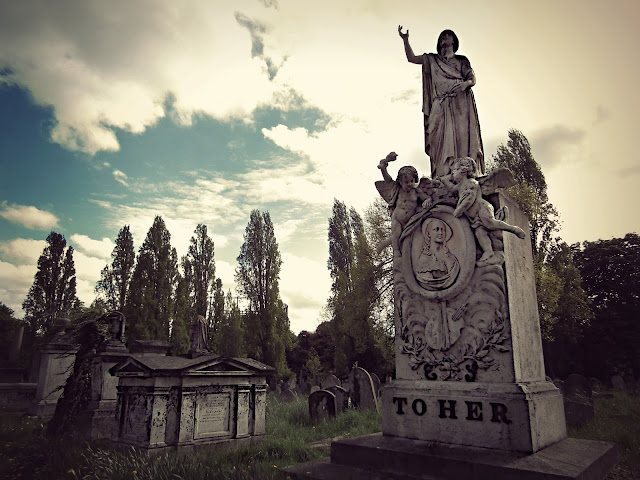 Alexis Benoit Soyer’s ostentatious display of grief for his 29 year old wife Emma Jones stands opposite the Upper Gate in Kensal Green Cemetery, a few yards away from the endless traffic and scurrying pedestrians on the Harrow Road. It’s size and position demand attention even during the day but by night, at least when it was first built, it was illuminated by gaslight, and must have been a truly uncanny sight for anyone who peered in through the cemetery railings into the dark and deserted burial ground. Emma was an artist and her husband displayed her palette and brushes like holy relics in a glass fronted niche at the back.

Alexis Soyer was a celebrated culinary artiste, a Frenchman who fled the 1830 revolution in Paris to join his brother in London who worked in the kitchen of the Duke of Cambridge. In time became the most renowned chef de cuisine in England, running the kitchens of the Reform Club, opening his own restaurant in Gore House, Kensington, authoring numerous books on cookery and advising the British government on the Irish famine and feeding the troops in the Crimea.

Elizabeth Emma Jones was born in London in 1813. She was a precocious and talented child, an accomplished pianist and an artist who first exhibited at the Royal Academy at the age of ten. She was tutored by Francois Simonau a successful Flemish artist who subsequently married her widowed mother. In 1836 Alexis Soyer paid a call on the francophone artist and was immediately entranced by the artists stepdaughter. Simonau and Emma’s mother were not keen on Soyer as a suitor as a chef de cuisine, even a successful one, was considered somewhat déclassé. Emma had no such misgivings however and her determination to marry Soyer eventually wore her parents down. The two were married on the 12th April 1837 at St George’s, Hanover Square. It was a happy marriage. Soyer was supportive of his wife’s artistic ambitions and the death of her mother in 1839 and the inheritance of her fortune allowed her the freedom to pursue her art. In her short life Emma produced over 400 paintings and nearly a 1000 drawings and she was good enough to exhibit not only at the Royal Academy but the Paris Salon. Her husband took every opportunity to promote his wife’s work – at the Reform Club he had the kitchens hung with her paintings, in the chef’s parlour there were at least 20 which he showed off to every important visitor who came to visit his famous kitchen.


One visitor, Queen Victoria’s uncle, Ernest I the Duke of Saxe-Coburg, was so impressed by Emma’s paintings that he suggested that Soyer accompany him to Brussels where he would introduce him to King Leopold 1 of Belgium who he thought might be keen to commission a work. Emma was pregnant but with some misgivings, as they had already lost one child through a miscarriage, Soyer decided to take up the offer. Whilst Soyer was away London suffered an unusually intense summer storm, the rain had come down in torrents and there had been thunder and lightning all day. Emma reacted badly to the continual rumble and roar of the thunder, appearing agitated and nervous. Eventually she retired early to bed where she was discovered dead by her maidservant two hours later. Soyer was distraught when he heard the news. His immediate reaction was to try and stab himself. His Belgian friends wrestled the knife off him and dragged him into the garden where it took them two hours to calm him down. He never forgave himself for his absence from home and never really recovered from the death of his young wife. He tried to buy back all of her paintings that had been sold so that he had every single one of her works (many people would not part with them however) and he commissioned the impressive funeral monument to her at Kensal Green. He was buried with her when he died in 1858. Also buried in the plot are Emma’s stepfather Francois Simonau and oddly a Lady Watts, Francois’ grandniece, who had herself interred here in 1929. 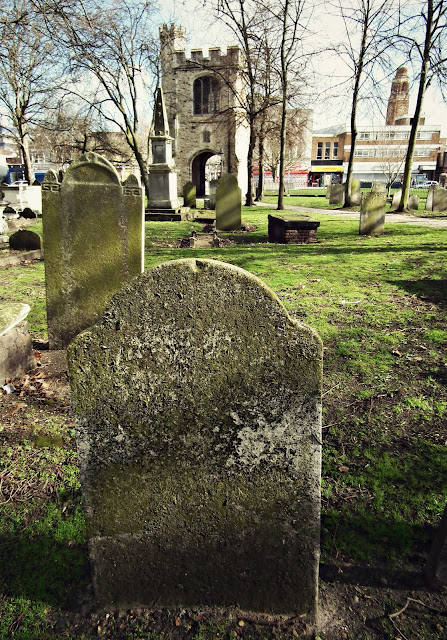 Wind, weather and time has reduced Daniel Day’s gravestone to an almost featureless slab of lichen and moss encrusted rock.  All trace of his name has been eroded away but if you look carefully enough you can just about make out the letters AIRLO, all that remains of the word Fairlop. Day was buried here in Barking church yard in 1767. Because he had developed a horror of horse drawn transport after being thrown from his carriage, even in death he refused equine assistance; he was brought by barge from Wapping, along the Thames and up Barking Creek and then carried the short distance to St Margaret’s by six journeymen block and pump makers. His coffin was made from a gigantic branch of the Fairlop Oak, a tree he had made famous by founding Fairlop Fair.

The Fairlop Oak was an ancient and monstrously huge tree; “at three feet from the ground it measured 36 feet in girth, it was divided into eleven vast arms, and overspread an area of 300 feet in circuit. This pride of the forest, which for so many years overshadowed with its verdant foliage the thousands who crowded under it, and the antiquity of which the tradition of the country traces to about the ninth century - this gigantic wonder gave shelter the first Friday in July the well-known Fairlop-fair.”  In the 1720’s Daniel Day of Wapping would ride out to the small estate he owned in Fairlop on the first Friday of July to collect his rents. According to G Woodgate in a letter to the editor of East London Observer in 1867 he “invited many of his friends to a bean feast and bacon, which he doled out to them from the hollow of the tree. Much bacon and several sacks were consumed this way. In the course of a few years other parties came, these increasing, booths were erected, and various articles brought to sale.”  The Fair became a great East End institution with gaming tables, drinking booths, boxing matches, roundabouts, travelling theatres, and fortune tellers. Daniel Day had a boat built complete with masts and rigging but constructed to run on wheels and be drawn by a pair of greys  in which he rode to the Fair from Wapping via Mile End, Bow, Stratford and Ilford. Imitators also constructed boats, bigger and more ornate than the original and drawn by teams of up to six horses. The return of the boats to Wapping from Hainault on the Friday night became a carnivalesque occasion with the crowds lining the streets back into London to watch the boats illuminated by coloured fires and accompanied by a brass band.

Friday last being the first Friday in July, the day on which Fairlop fair is usually held, an immense concourse of people, taking advantage of the fine weather, assembled in the Mile End Road to “see the boats come in”. The working men “had come forth in their thousands” and the noble road way of Whitechapel was lined from the New Road to Bow by half the population of London. The boats did not arrive until about half past eleven, but considerably before that time the appearance of a long procession of gaily bedizened costermongers, shouting snatches of the last new comic song, heralded the approach of the four splendid greys which drew each boat. Red, blue and green fire was blazing from the window of houses in all directions, giving a ghostly appearance to the faces the light shone upon, and resembling for the time miniature conflagrations. We are happy to state that not a single mishap, as far as we know, occurred to mar the jubilancy of the occasion.
East London Observer 1867

Mr. Day died October 19. 1767. His remains were carried by water in a coffin made from the wood of a large branch [of the Fairlop Oak], which broke off just before his death. He desired to be buried at Barking Church, having been once thrown off his horse, and at other times overturned in his wheel-carriage, took a dislike to both, and thus the funeral took its course on the silent highway; six journey block and pump-makers followed him to whom he bequeathed a new leather apron and a guinea each. ....The founder of the fair was remarkable for benevolence; he was never married but had a few innocent eccentricities and was kind to the children of his sister. He had a female servant, a widow, who had been twenty eight years with him. As she had in life loved two things in especial; her wedding ring and her tea, he caused her to be buried with the former on her finger and a pound of tea in each hand – the latter circumstance being more remarkable as he himself disliked tea and never used it. He had a few small aversions but no resentments he was always shocked when he heard of any people going to law; he gave much away and was continually lending money to deserving persons, charging no interest for it. (G. Woodgate in the East London Observer)

The Oak outlasted Daniel Day by a mere half century, a mere twinkling of the eye in the life of a tree. The once magnificent oak was mortally sick by the end of the century. William Forsyth, gardener to George III was paid a nominal 6d in 1791 to apply curative plasters made from cow-dung, ceiling lime, wood ash, river sand and burnt bones to the remaining healthy wood after all the dead and decaying branches had been cut off. A sign was affixed to the tree saying ‘All good foresters are requested not to hurt this old tree, a plaster having lately been applied to its wounds.’ Despite the valiant attempt at treatment the oak continued to die. By 1805 it was a huge hollow shadow of its former self in which several cattle could take shelter. Picnickers took to sheltering and lighting fires inside the oak and eventually and inevitably one fire burned out of control for almost 24 hours, inflicting further irreparable damage to the by now barely living tree. On Fair day in 1813 an elderly gentleman paid a boy 2/6d to pluck the last green sprig growing on the trees crown. In 1820 a gale finally brought the now dead oak crashing to the ground. Mr Seabrooke, the builder currently engaged in building St Pancras new church, purchased some of the better preserved timber from the oak and used it to construct the pulpit which still stands in the church.
Posted by David Bingham at 15:58 No comments: