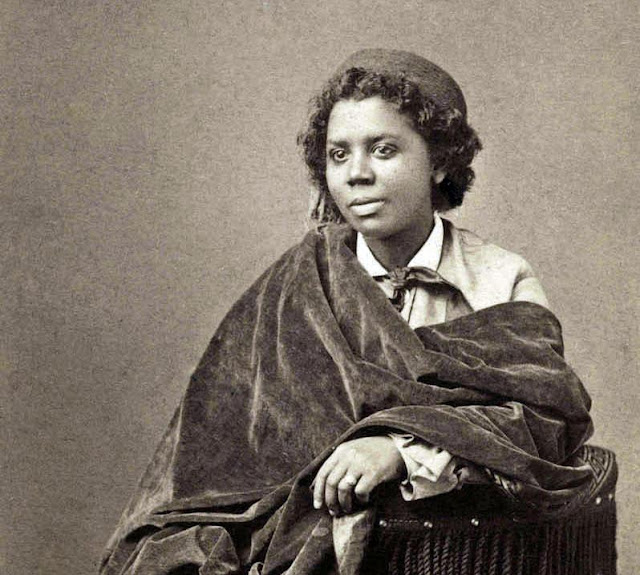 Where, when and how black American sculptor Edmonia Lewis died was, until as recently as 2010, a mystery. Her ethnic background, artistic ability and presence in Europe meant that she achieved some measure of celebrity during her lifetime but she eventually slipped into an obscurity so profound that rumours of her death started to circulate even whilst she was still alive. After researching Lewis’ life since the 1980’s US cultural historian Marilyn Richardson probably couldn’t believe her luck when the 1901 census went on line and she found the artist’s name at 37 Store Street in Bloomsbury (just around the corner from the British Museum). With the help of a London based US lawyer, Scott Varland, she eventually located Lewis’ will and probate records. These showed that Lewis died on 17 September 1907 in the Hammersmith borough infirmary on Goldhawk Road, had been living at 154 Blythe Road, W14 and left effects worth £489 0s 1d.  The cause of death recorded on her death certificate was nephritis, then called Brights disease, a chronic inflammation of the kidneys. Burial records revealed that she was interred in St Mary’s Catholic cemetery in Kensal Green where her grave is marked by a flat ledger style stone on which all traces of any inscription have long since weathered away. The anonymity of the grave led another admirer, Bobbie Reno, the town historian of East Greenbush, a suburb of Albany, to set up a GoFundMe page to raise the money necessary to create a new marker. Unfortunately, only around a dozen people contributed and the diminutive black marble box with Edmonia’s name, profession and dates inscribed in gold lettering is rather underwhelming. In Mount Auburn cemetery in Cambridge, Massachusetts Edmonia’s statue of Hygeia marks the grave of Harriot Kezia Hunt, a pioneer female doctor who died in 1875. It is a shame that not even a copy of one of her own works marks her grave. 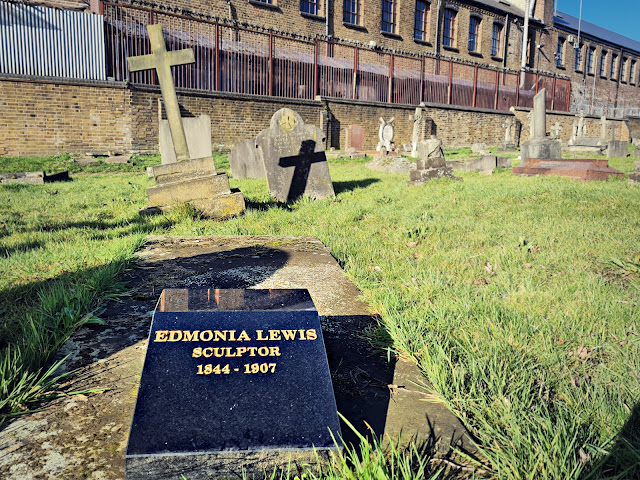 Sparked by Edmonia’s move to Rome, an account of her early life appeared in the Athenaeum in 1866 and was heavily drawn upon in numerous newspaper accounts of what was obviously seen as a  noteworthy oddity; not only a black artist, but a female one to boot:

A Negro Sculptress — Rome, Feb., 1866 —An interesting novelty has sprung up amongst us, in a city where all our surroundings are of the olden time. Miss Edmonia Lewis, a lady of colour, has taken a studio at Rome, and works as a sculptress in one of the rooms formerly occupied by the great master, Canova. She is the only lady of her race in the United States who has thus applied herself to the study and practice of sculptural art, and the fact is so remarkable and unique that a brief sketch of her life, given almost in her own words, will, I am sure, be acceptable to the wide circle of your readers:- “My mother,’’ she told me only last Monday, was a wild Indian, and was born in Albany, of copper colour, and with straight, black hair. There she made and sold moccasins. My father, who was a negro, and a gentleman’s servant, saw her and married her. I was born in Greenhigh, in Ohio. Mother often left her home and wandered with her people, whose habits she could not forget, and thus her children were brought up in the same wild manner. Until I was twelve years old I led this wandering life, fishing and swimming,” she added with great glee, “and making moccasins. I was then sent to school for three years in M'Graw, but was declared to be wild—they could do nothing with me. Often they said to me, ‘Here is your book, the book of Nature; come and study it.’ From this school I was seat to another, at Oblin, Ohio, where I remained four years, and then I thought of returning to wild life again; but my love of sculpture forbade it.

Some of my friends recommended me to go to England, but I thought it better first to study in Rome.” And here she is, the descendant and member of a much-injured race, struggling against ignorant prejudice, but with genius enough to prove that she bears the image of Him who made all the nations under the sun. Whilst her youth and her colour claim our warmest sympathies, Miss Edmonia Lewis has a very engaging appearance and manners. Her eyes and the upper part of her face are fine; the crisp hair and thick lips, on the other hand, bespeak her negro paternity. Naive in manner, happy and cheerful, and all unconscious of difficulty, because obeying great impulse, she prattles like a child, and with much simplicity and spirit pours forth all her aspirations.

At present she has little to show; she appeals to the patronage and protection of the civilised and the Christian world. There is the cast of a bust of Colonel Shaw, who commanded the first coloured regiment that was ever formed, and who died “a leader for all time in Freedom’s Chivalry.” The bust was executed from a photograph, and now, as a commission from the sister of Colonel Shaw, is being transferred to marble. Another commission is a bust of Mr. Dio. Lewis, I believe, of New York. Her first ideal group was to be executed under promise for some gentleman in Boston, and in the true spirit of a heroine, she has selected for her subject “The Freedwoman on first hearing of her liberty.” She has thrown herself on her knees, and, with clasped hands and uplifted eyes, she blesses God for her redemption. Her boy, ignorant of the cause of her agitation, hangs over her knees and clings to her waist. She wears the turban which was used when at work. Around her wrists are the half-broken manacles and the chain lies on the ground still attached to a large ball. “Yes,” she observed, “so was my race treated in the market and elsewhere.” It fells, with much eloquence, a painful story. —Athenaeum. 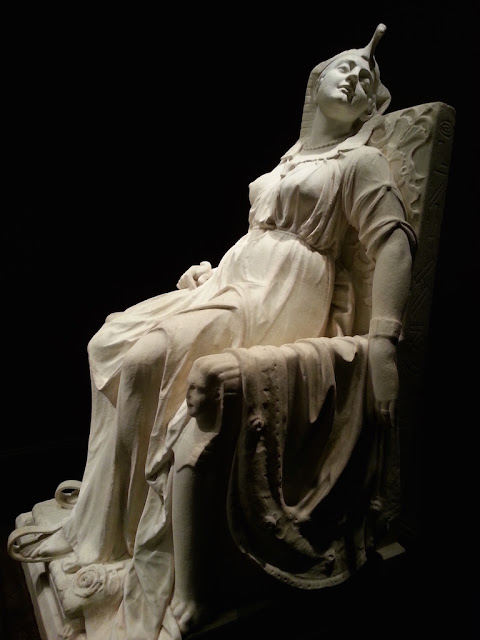 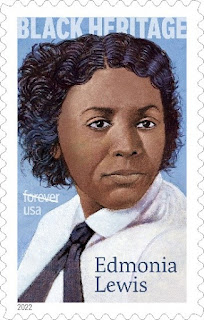 Henry James was resident in Rome at this time and was scathing about the artistic community of his fellow Americans who had also made their home there. He was particularly vituperative about women artists in general and Edmonia in particular. “One of the sisterhood was a Negress,” he wrote, “whose colour, picturesquely contrasting with that of her plastic material, was the pleading agent of her fame.” On 26 January this year the US postal service issued a commemorative stamp celebrating Edmonia’s life and work – just 6 years after they issued their Henry James one in 2016. Edmonia’s most famous work, the Death of Cleopatra is now on prominent display in the Smithsonian in Washington. It has an interesting history; it was created for the 1886 Philadelphia Centennial Exposition and caused something of a stir amongst visitors and critics (“It is a question whether a statue of the ghastly characteristics of this one does not overstep the bounds of legitimate art,” said one commentator. Endlessly portrayed in art, Edmonia’s version of the death of the Egyptian queen has not an asp in sight and she reclines, one breast exposed, on her throne in her death throes. After the exhibition it was sent to Illinois to feature in the Chicago Interstate Industrial Exposition of 1878.  The massive two-ton statue was then abandoned in a Chicago storage facility until 1892 when it was removed, almost certainly without Edmonia’s permission (or payment of any compensation) placed outside a saloon on Clark Street as a decorative backdrop for the bourbon and beer drinkers of Windy City. It was later bought by a professional gambler and racetrack tycoon called Blind John Condon who used it a tombstone for his favourite horse (obviously called Cleopatra) who was buried at Harlem Racetrack (in Forest Park, Illinois).  The site of the racetrack became a US mail depot in the 1970’s and the statue found itself back in storage yard from where it was rescued by a fire inspector who allowed his son’s boy scout troop to paint it white. By the 1980’s it was in storage in a shopping mall; in 1988, Frank Orland, a dentist from Forest Park, wrote to the Metropolitan Museum of Art in New York, asking about the artist Edmonia Lewis as he had a piece of work by her, he said, depicting the death of Cleopatra. A curator forwarded the letter to Marilyn Richardson, who recently put out an ad in the New York Times Book Review asking about Edmonia.  Richardson struggled to get hold of the dentist so she flew to Chicago and tracked down his residence where his wife helpfully took her to the storage facility for the historian’s first sight of Edmonia’s masterpiece; a moment almost as moving as Howard Carter's first glimpse of Tutankhamun's tomb ('Can you see anything?' 'Yes, wonderful things.'). “It was just standing there in the storage area, surrounded by holiday decorations and papier-mâché turkeys and Christmas lights and Christmas elves,” Richardson said. “I was shaking.” 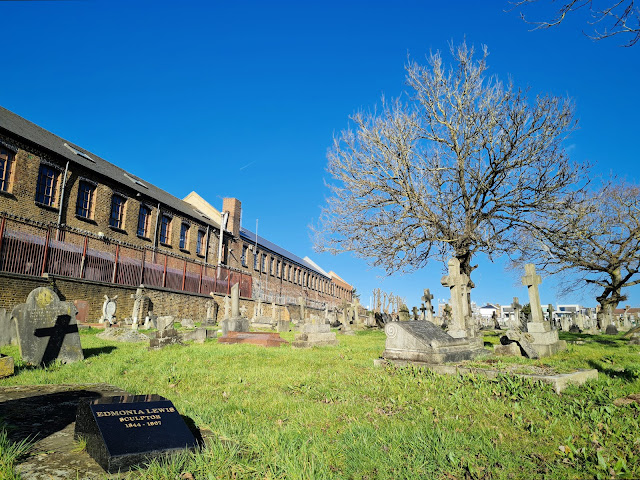