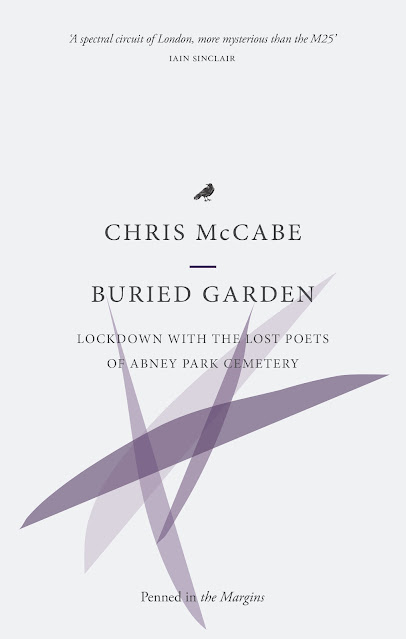 ‘A spectral circuit of London, more mysterious than the M25.’ - Iain Sinclair

If you take two niche interests, such as cemeteries and poetry, and deal with them in one book, do you increase your potential readership to all those interested in either of your subjects? Or do you reduce it to a pitiful fraction, appealing only to those readers who are interested in both subjects? To a poet like McCabe used to the miniscule sales that poetry attracts, the market for prose must seem vast in either case.

‘Buried Garden; lockdown with the lost poets of Abney Park Cemetery’ is the fourth instalment of poet McCabe’s projected heptalogy chronicling his quixotic quest for forgotten poets in London’s magnificent seven cemeteries. Published on October 31st last year (to coincide with Halloween presumably) it was launched with a late afternoon tour of Abney Park hosted by the author and Iain Sinclair, who has taken an interest in some of the previous volumes in the series and features heavily in this one.  The series began with ‘In The Catacombs – a summer amongst the dead poets of West Norwood’ in 2014, and continued with ‘Cenotaph South – mapping the lost poets of Nunhead Cemetery’ in 2016 and ‘The East Edge – Nightwalks with the dead poets of Tower Hamlets’ in 2019.  Although we can’t be sure in which order McCabe will tackle the remaining three cemeteries, or how long he will take to produce new books, extrapolating from his current work rate we will hopefully see new volumes on Brompton and Kensal Green at some point in the next four years and I would guess that the series will terminate with a magnum opus on Highgate circa 2028. I have read all of the first four books since January and now find myself having to wait a couple of years for the next instalment.

From the first book the author himself freely admits that the search for a forgotten poet of the calibre of Emily Dickinson or Gerard Manley Hopkins is probably doomed to failure, but of course, you never know. With admirable grit traces the lost graves and the forgotten works of poets who often enjoyed some degree of popular or critical acclaim in their lifetimes and then reads their mouldy old tomes. The reading is inevitably a disappointment; the forgotten poems generally high Victorian doggerel. McCabe subjects this unworthy verse to genuinely serious criticism; I admire his dedication but the resulting pages don’t make for gripping reading. His biographical details are more interesting though apart from Tower Hamlets William Onions, a malefactor who was arrested over 500 times for various petty misdemeanours before turning his excess energies to the production of second-rate poetry, his poets are a pretty staid lot.

Luckily McCabe is the sort of writer who finds it difficult to stick to his subject.  His book on Nunhead starts with news of his mum’s cancer and an account of planting a tree in Bootle to commemorate the 10-year anniversary of his father’s death. As well as the completely forgettable poets buried in the cemetery, he explores poets and writers who have some general connection with Nunhead (or Dulwich, or Peckham); Blake, Browning, Barry MacSweeney, and B.S. Johnson. As if one futile quest isn’t enough, he sets off trying to locate Blake’s angel tree on Dulwich Common and eventually comes to the conclusion that this was probably not, as generally accepted, an oak but a hawthorn in bloom, the angels being nothing more than hawthorn blossom. Leavening the mix are short pieces of experimental prose. McCabes broad themes and preoccupations, poetry, London, Liverpool, death, cemeteries, autobiography etc somehow, over the course of the four books, manage to coalesce this apparent ragbag of subjects into a coherent whole.  These are not polished, well-structured works of prose but I found myself warming to McCabe and his imperfections and enjoying his company. I was rather sad to reach the end of ‘Buried Garden’ with a long wait in prospect until I can spend more time with the author.