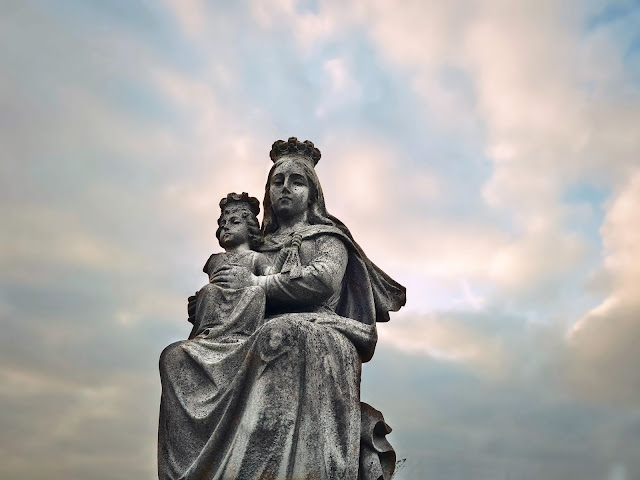 For I am every dead thing,
In whom Love wrought new alchemy…
He ruin'd me, and I am re-begot
Of absence, darkness, death: things which are not.

Covid has put an end to my traditional Christmas Eve cemetery visit as I’m no longer working in an office and so don’t get let out early for a half day holiday on the 24th.  Instead this year I took the afternoon off on the 21st December, the winter solstice, the shortest day of the year. Before we finally gave in and accepted the Gregorian calendar in 1752 (after almost 200 years of spirited resistance to the Papists) the Winter Solstice used to fall on December 13, St Lucy’s day, ‘the year’s midnight’ as John Donne called it in his gloomy meditation on the 7 hours 49 minutes and 42 seconds of daylight we get in Southern England on the day of the solstice (but let us not complain, it is at least an hour more than they get in Aberdeen and two more than the Norwegians and Swedes get in Oslo and Stockholm). Sunset was at 3.53pm and the management at St.Mary’s Cemetery in Kensal Green wanted us out of there by 3.45. Cemeteries are always busy Christmas week and St. Mary’s was no exception. The older part of the cemetery was deserted apart from the gravediggers, who were hanging around tinkering with their mechanical diggers and reminding anyone in ear shot about the early closing time. At the bottom end of the cemetery where the newer graves are there was a steady stream of visitors, mainly arriving by car, bearing Christmas wreaths and decorations as a seasonal alternative to flowers. Poinsettias and tinsel adorned many graves, some of them very elaborately decorated for the nativity. I felt too self-conscious to take photos of the newer graves but this relatively recent trend of decking out memorials with holly and fairy lights is quite interesting. When you drive past Chingford cemetery at night at this time of year the place glows eerily with solar powered LED string lights. St. Mary’s isn’t visible from the road and the gravediggers make sure everyone is out before sundown but I bet it presents an equally festive appearance in the dark. 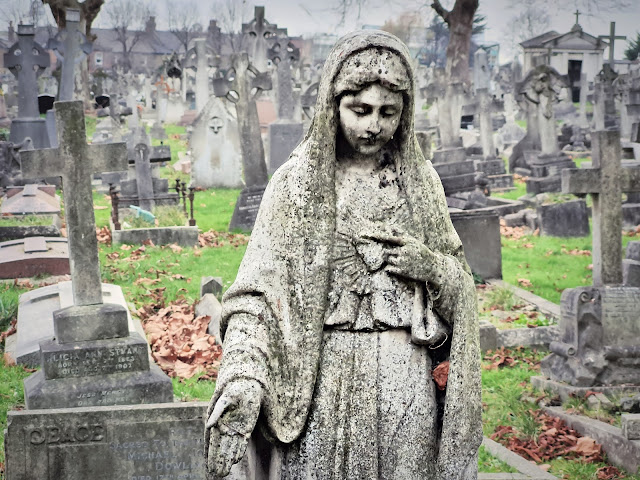 St. Mary’s was in the news recently for being the location of one of the increasingly senseless murders that seem to be becoming a feature of urban life in London. On the afternoon of 22 November 2020 61-year-old Michael Morris-Owens was sitting on bench in the cemetery close to the Chapel. A stranger, 51-year-old Cornelius Tully engaged him in casual conversation. When Morris-Owens refused to shake Tully’s hand, possibly because this was during one of last years lockdowns, the younger man apparently took offence and produced a bayonet which he rammed in Morris-Owens stomach. The wounded man fled with Tully in pursuit, slashing at him from behind and tried to get into his parked car. Tully hacked him down by his vehicle, inflicting over thirty wounds with the bayonet. Other visitors to the cemetery tried to intervene, at first to stop the attack and then to try and save Morris-Owens but he was pronounced dead by paramedics when they arrived at the scene. Tully didn’t try to escape; he waited until armed police arrived and then gave himself in. He appeared at the Old Bailey on 14 September 2021 via video link from a secure mental hospital in Three Bridges to plead guilty to manslaughter on the grounds of diminished responsibility. On November 11 he was sentenced to an indefinite hospital order, meaning that he will only be released if psychiatrists agree that he is no longer a danger to himself or others. After having been murdered there Michael Morris-Owens was buried at St Mary’s on 04 March 2021. 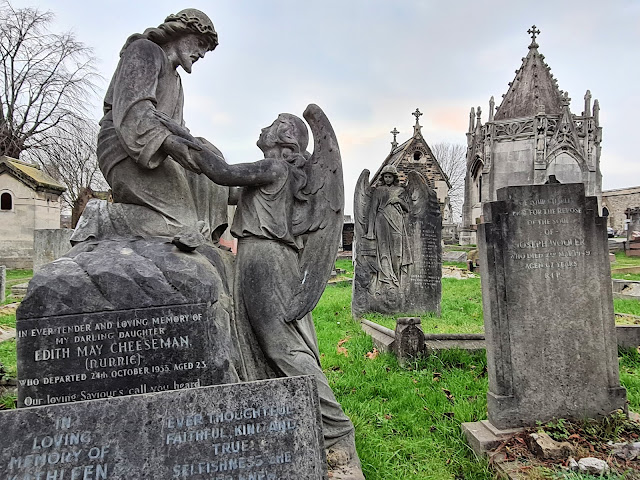 There was a particularly sad funeral held at the cemetery on Tuesday 08 December 1953. 5-month-old Tomunatanye Davis was buried with just a priest, her mother Veronica, a representative from her mother’s employer, the United Africa Company, and an African nurse from Hammersmith Hospital in attendance. The floral tributes were a sheaf of flowers from the company and a bunch of violets presented by a Girl Guide troop. Tomunatanye had died on 03 December during an operation held at Hammersmith Hospital to separate her from her conjoined twin sister Wariboko. The twins were born in Kano, Nigeria on 25 July 1953 and became an immediate media sensation when they were flown to England to be separated. The operation was carried out by Scottish surgeon Professor Ian Aird who was no doubt hoping to make history by carrying out the first successful surgical separation of conjoined twins. Unfortunately, Tomunatanye died in the operating theatre though Wariboko survived. The funeral of Tomunatanye on the 8th did not stop the Daily Mirror crowing about the operation as a triumph of British imperialism the following day;

BABIES OF IMPORTANCE   EVERY mother in Britain is keeping her fingers crossed for baby Boko, the survivor of the Siamese twins from Nigeria. She is the most famous baby in the world - the piccaninny who stole the headlines from Winston, Ike and Georgyi.

Boko is noticing people. Hear that, Mum? Boko is sucking her fist, now. Just listen, Dad! This is the battle for recovery that grips all parents. And behind the battle is the other story. Of the twins' journey to London with their mother - paid for by their father's firm. How a Scottish surgeon, giving his services free, separates the twins in a London hospital.

THIS is the " imperialism" we—and Boko's mother—are proud of. Boko is its bonny emblem. And not the only one. For, 2,000 miles away, an important Egyptian baby has been rushed British medical care.

He is Mohammed, son of Major Salem, Egypt's Minister of National Guidance. Salem talks hatred of British "imperialism." But he appealed for help to the British Army in the Suez Canal Zone when his baby developed infantile paralysis. GOOD FOR HIM! A British specialist and nurses raced to Cairo. An iron lung was flown from this country. Now Mohammed, like Boko, is doing better. Bless them both. They stand for so much decency and humanity between nations. Their stories make CHEERFUL reading. Britain has a right to feel happy about them both.

Wariboko and her mother returned to Nigeria just three weeks after the operation.  Veronica Davis went on to have another pair of twins, not conjoined this time, both of whom in infancy. She later died giving birth to a still born baby before Wariboko was old enough to remember her. Wariboko was brought up by a Mr and Mrs Jituboh and became a nurse. She is, as far as I know, still alive, she certainly was in 2015. Professor Ian Aird committed suicide in 1962. 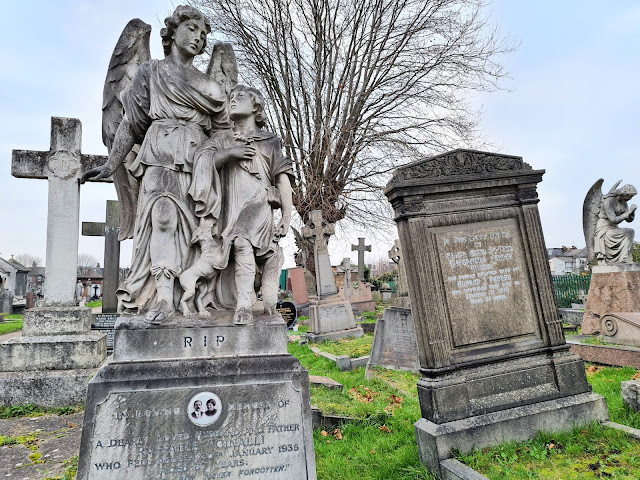 Another sad funeral was that of artists model Norine Fournier Lattimore, a story widely syndicated in the newspapers and here taken from the Hartlepool Northern Daily Mail of  Friday 10 August 1934;

Only four mourners, headed bv her father. Mr E. Scholfield, attended the funeral of Dolores the famous model, at Kensal Green Catholic Cemetery, London, to-day. During her stage and studio life Dolores’ friends had been legion. The service at the graveside was conducted by Father Pelors, a French priest. On the coffin was a wreath of lilies from Dolores’ father bearing the inscription. "God rest your soul.— Papa" and a posy of sweet peas. There were two other wreaths at the graveside from friends. The burial was in a public grave.

Norine Schofield was born in London in 1934 into a theatrical family. She was raised in Islington and a junior Tiller girl before moving to Paris where she joined the company of L'Opéra Comique where she met Sarah Bernhardt, danced with Anna Pavlova and danced before Kaiser Wilhelm who presented her with a gold powder box. She became an artists model for Jacob Epstein and a clothes model for Norman Hartnell. She married three times and at least two men reputedly committed suicide because of her, her first husband Frank Amsden and the artist Frederick Atkinson. Norine protested “I am not a heartless vampire,” after her conduct came under criticism at Atkinson’s inquest. Her life ended in straightened circumstances at the age of 40, her last public appearance in public being "fasting in a barrel" at a fun-fair in Tottenham Court Road, a position she took over from Harold Francis Davidson the disgraced vicar of Stiffkey who had been defrocked because of a scandal involving prostitutes (he was, I feel impelled to point out, an Anglican priest, not a catholic one). She died of cancer in St Mary Abbot's Hospital, Marloes Road, Kensington, on 8 August 1934. 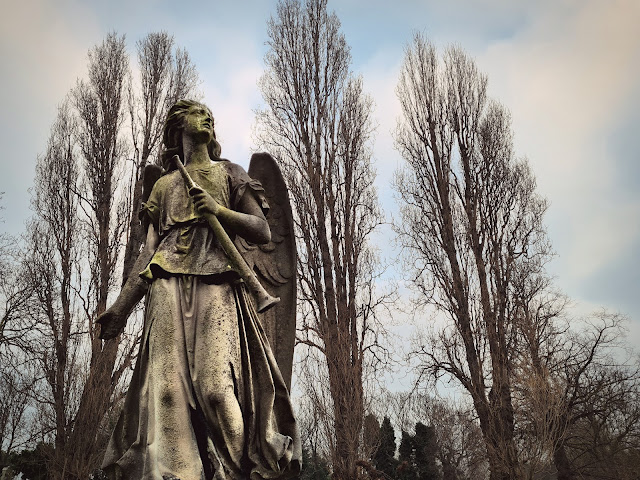 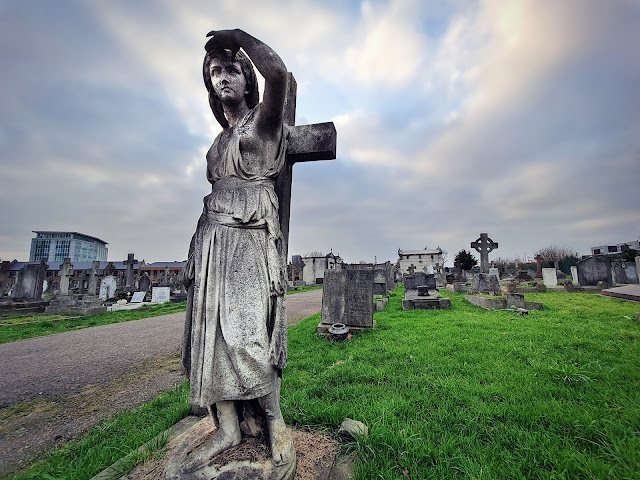