This must be the first tomb I ever made a special point of visiting, back in 1987, I think, when I lived in Barnes. We rented a gloomy basement flat in one of the palatial villas that line both sides of the road about half way down Castelnau. The villas, built in in the 1840’s were almost all occupied by the rich and successful except for ours which was divided into a multitude of small flats and rented out by a wealthy landlord as ancient and desiccated as an unwrapped pharaonic mummy. I had no special interest in cemeteries at the time, despite my landlord looking like he had just been dug up from one, but I was fascinated by Sir Richard Burton. I had been reading Fawn Brodie’s biography of the Victorian explorer, ‘The Devil Drives’, and was interested to discover that he was buried in Mortlake, a half hour walk away from our flat. The mausoleum stands in the churchyard of St Mary Magdalen on North Worpole Way, a high Victorian, gothic revival catholic church dating from the 1850’s.  The tomb was Grade II listed in 1973 but 15 years later it was looking rather neglected, black with soot and threatened by aggressive ivy growth. I had no idea that around the back of the mausoleum was a ladder that allowed you to climb up and peep through a glass window at the coffins of Burton and his wife Isabel. I only had the pleasure of that experience nearly thirty years later when I returned in 2016 to find that the mausoleum had been recently cleaned and renovated. That is when I took these pictures. 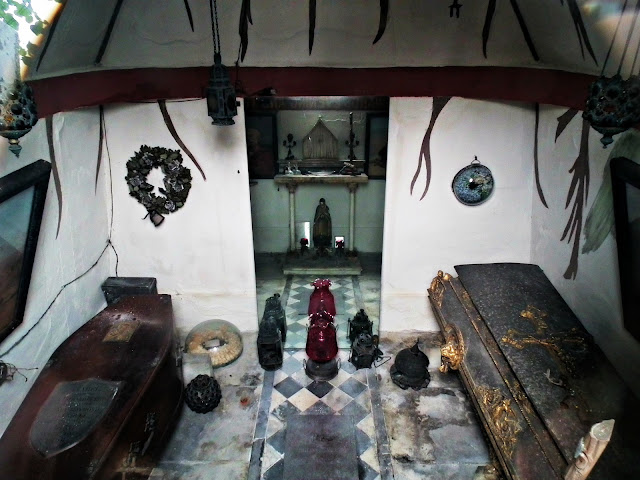 Does Richard Burton need any introduction? His obituaries described him as an ‘eminent Eastern traveller and Orientalist’. Wikipedia sum him up as “a British explorer, writer, scholar, and soldier... famed for his travels and explorations in Asia, Africa, and the Americas, as well as his extraordinary knowledge of languages and cultures.” He was supposedly fluent in 29 languages as well as having a grasp of numerous dialects. He travelled to Mecca and was the first European to see Lake Tangyanika, failed to find the source of the Nile, and translated numerous works from Arabic and Sanskrit including an unexpurgated Arabian Nights. He was also endlessly fascinated by smut and loved to shock his contemporaries with stories of exotic sexual practises in Africa and Asia. He married Isabel Arundell in 1861 when he was 40 and she was 30. They had met a decade earlier but Burton only proposed when he returned from the Crimean war in 1856. Her family were opposed to the match; not only was Burton a swashbuckling explorer who spent little time at home, he was also not a Roman Catholic, unlike the aristocratic Arundells; family disapproval finally faded away when Burton promised to raise any children as Catholics. Shortly after their marriage they were separated for several years when Burton was appointed Consul to Fernando Po in Equatorial Guinea. They were reunited in 1865 when Burton received a new posting to Santos in Brazil. From there she followed him to further postings in Damascus and, finally, in 1872 to Trieste, where Burton remained as Consul until his death in 1890. A photograph from the late 1880’s shows the couple in the garden of the consulate, Burton dapper and distinguished in grey frock coat and top hat but Isabel, apparently wagging an admonishing finger at her husband, frumpy in what look like premature widow’s bombazine weeds. 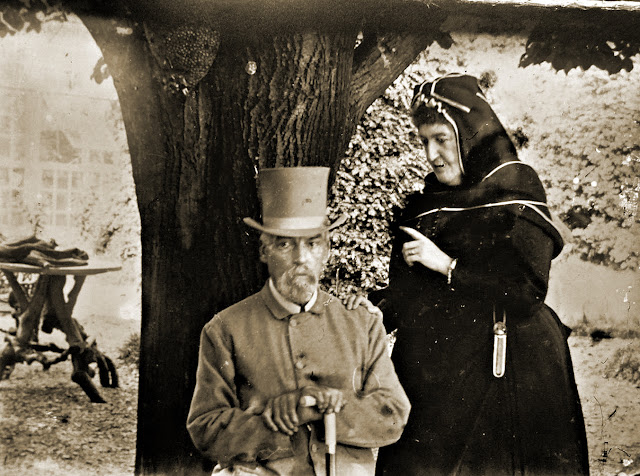 Burton died of a heart attack in the early morning of 20 October 1890. Isabel controversially called in a catholic priest to perform the last rites. Many of Burton’s friends suspected that these were performed after Burton was already dead as he made no attempt when alive to disguise his atheism. She further alienated Burton’s supporters when she burned some of his manuscripts including some of his journals and a new translation of The Scented Garden (despite having been offered 6000 guineas for it by a publisher).  Just a few days after his death newspapers, like the St James's Gazette on 23 October were reporting Burton’s funeral as having taken place in Trieste:

FUNERAL OF SIR RICHARD BURTON. The funeral of the late Sir Richard Burton took place at Trieste yesterday afternoon. The ceremony was of an impressive character, being attended by the Governor, with the principal civil the military and naval staff officers, and all the members of the Trieste Consular body well as a large number of private mourners. The funeral car was covered with beautiful wreaths.

Of course Burton was not buried in Trieste in October 1890, his funeral took place in Mortlake 8 months later, on Monday 15 June 1891. He spent his time between arriving in England and being interred in the mausoleum in the crypt of St Mary Magdalen waiting for his tomb to be built. The mausoleum was designed by Isabel as a Bedouin tent.  The Cheltenham Chronicle of 20 June 1891 gives the following account of the funeral arrangements:

The funeral of the late Captain Sir Richard Burton took place on Monday morning at the Church of St. Mary Magdalene, Mortlake. A numerous congregation of relatives and friends assembled at the invitation of Lady Burton, who was herself present, and the church was well filled. The requiem mass was sung by the Right Rev. Monsignor Stanley, of Spanish place Church, assisted by Fathers White, Regan and Cafferata. The music was by Casciolini and was rendered by a special choir of professionals. Father Cox's In Paradisum was sung on the removal of the coffin from the church to the cemetery adjoining, the concluding prayers being said at the graveside, by Provost Wenham, the priest of the mission. A harmonized Benedictus was then sung, during which Lady Burton and several friends laid wreaths of flowers by the side of the coffin. About 650 cards of invitation were issued by Lady Burton to friends and sympathisers, of whom about 400 were present. Among those were Marquis of Kipon, Marquis and Marchioness of Drogheda, Lord Arundell of Wardour….

The marble mausoleum erected by Sir Richard's English friends and admirers, is sculptured in dark Forest of Dean stone and white Carrara marble, it represents an Arab tent, 12ft by 12ft. and 15ft high, surmounted by a gilt star of nine points. Over the flap door of the tent is a white marble crucifix. The fringe is composed of gilt cressets and stars. The flap door of the tent supports an open book of white marble, on which are inscribed Sir Richard's name and the dates of his birth and decease, with a tablet below bearing the epitaph composed by Mr. Justin McCarthy. 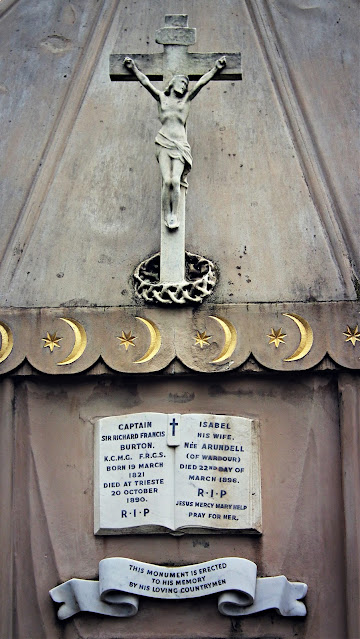 Isabel used her years of widowhood to produce a hagiography of her husband and her own autobiography. She died of cancer 5 years after burying him, joining him in the mausoleum in March 1896;

The remains of Lady Burton, widow of Sir Richard Burton, the famous explorer, were removed from Baker-street on Thursday to Mortlake, and placed for the night in the Roman Catholic Church of St. Mary Magdalene. The coffin was surrounded by many beautiful wreaths sent by, among others, Lord and Lady Gerard, Lady Huntingtower, Lady Violet Beaumont, and Mrs. Oliphant. Yesterday there was a large congregation at the Requiem Mass which preceded the interment. The choir was composed solely of priests, and the service was throughout of the most impressive character. Included among the mourners were Mrs. Fitz Gerald, the Rev. the Hon. E. Arundell, Mr. Gerald Arundell, Mrs. Vanzellcr, and Mr. Bertram Pigott.  (Globe - Saturday 28 March 1896)

There was a minor scandal when the contents of Isabel’s will were made public a few months later. It was not the disposition of her assets that caused raised eyebrows (despite leaving a particular instruction “that her belongings at Baker-street, should not be scattered out to second-band shops”) but her directives about what should happen to her body. Evidently worried that she might be buried alive she ordered that her doctor should be called in and instructed to pierce her heart with a needle. Furthermore “the doctors attending, or some clever surgeon to be called in for the purpose, should make a post-mortem examination by removing the tumour, and that she should be embalmed by disembowelling and stuffing (not by the new process of injecting in the veins) in order that her body may be kept above ground by the side of her husband in the mausoleum tent at Mortlake.”  The Westminster Gazette (17 June 1896) went on to say that Lady Burton “stated that she had bought—adjoining the tent—a vault for four bodies, and that two places were to be reserved in order that if a revolution should occur in England, and there should be a threat of the desecration of the dead, the coffins of herself and her husband might be lowered into the vault.” She also left instructions to ensure the salvation of her, and her husband’s, souls;

She desired that immediately after her death a telegram which she had prepared should be sent to the Cure Achille Serre, in Paris, who is to receive £l20, or 3,000 francs, for 3,000 masses to be said at once, or 100 sets of Gregorian masses. The testatrix also provides an annuity to pay for a daily mass to be said in Paris perpetually, at one franc for each mass. She provides that a sum of £6O should be paid to the Bishop of Southwark, for five anniversary masses perpetually on the day of her wedding, on her own and her husband's birthdays, and on the day of her husband's death and of her death. She desired that her Carmelite dress and the scapular, which alone she stated she was worthy to wear, should be placed in her coffin. 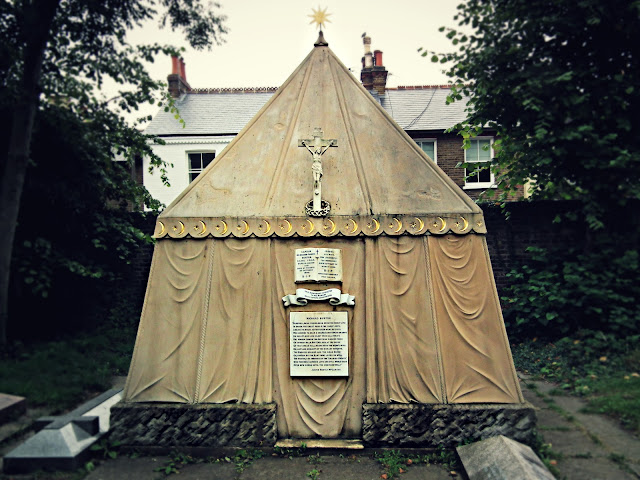