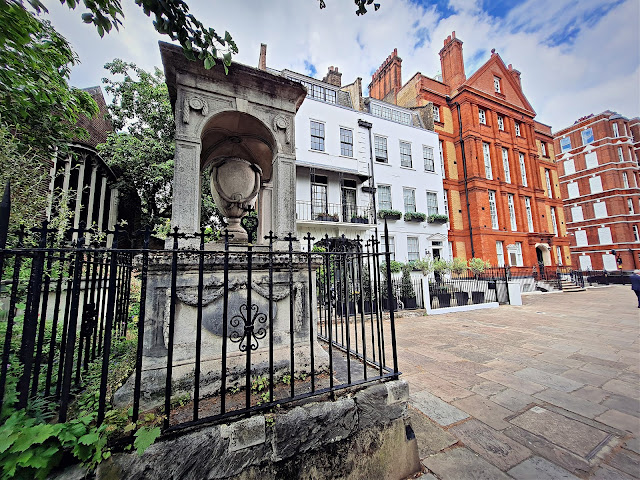 There was nothing too small, too big, too fast or too odd for Hans Sloane not to want to put it under glass and attach a label. Setting out to collect the world in the late 17th century, Sloane packed his cabinets with gnats’ blood, Inuit sun visors, a stick to put down your throat to make yourself sick, a cyclops pig, a silver penis protector and a bit of coral that looked just like someone’s hand. Out of this jumble of natural and manmade scraps he fashioned a legacy for the nation. In 1759 the British Museum was opened for the purpose of letting plebeians, patricians and everyone in between gawp at the world as refracted through one man’s roving eye and sticky fingers.

Sir Hans Sloane has become something of an embarrassment to the beneficiaries of his many legacies. Dr Hartwig Fischer who, since 2016, had been the first foreign director of the British Museum, was left in a difficult position after the death of George Floyd and the resurgence of the Black Lives Matter movement in 2020. On 05 June the Museum website carried a special message from him;

Inevitably the question was asked – “does this mean the museum is going to return the Benin Bronzes to Nigeria?” (Or the Elgin Marbles to Greece, the Maqdala collection to Ethiopia, the Moai to Rapa Nui, the Rosetta stone to Egypt etc). The answer to that question was, of course, no. What the Museum would do would be to put “inclusion and diversity… at the heart of our values” by working “to diversify our own staff” and broadening “the diversity of voices present in the interpretation of objects in the collection” and, last but not least, by continuing “to research, acknowledge and address the colonial history of Britain and its impact on our institution…” And of course, that means having to acknowledge that your founding collection was donated by a slave owner…

In August 2020 a dusty bust of Sir Hans, to which no one previously had paid much attention, was removed from the pedestal in the museum it had occupied for longer than anyone remembered and placed inside a glass case along with a number of other objects and information boards which explained his role in the foundation of the museum and his connection to West Indian slavery.  This simple act meant that Sir Hans Sloane had, as far as some people were concerned, been 'cancelled'.  Dr Fischer somewhat undermined the reasonable course of action the museum had taken by excitedly telling the Daily Telegraph that “we have pushed him off the pedestal. We must not hide anything. Healing is knowledge,” before going on to defend the Museum’s stance on accepting corporate sponsorship from BP. The tabloids remained resolutely uninterested in the kerfuffle; the fuss wasn’t about Winston Churchill and no one had been pushed into a dock, so who cares? Charles Moore rushed to Soanes defence in the Spectator arguing that Dr Fischer had reacted “unprofessionally, in panic clothed as principle — and with base ingratitude” to the museum's founding father. David Olusoga responded to the article in the Guardian pointing out that “Britain is gradually coming to the end of a very different and highly effective process of historical erasure that has endured for centuries. What bothers critics of the museum is that the new display makes plain the fact that much of the wealth Sloane used to purchase his vast collection was derived from slavery.” The Belfast Telegraph wasn’t having any of that, Sir Hans a slave owner!; “Hans Sloane never owned a slave,” claimed Elizabeth Crilley, the CEO and founder of the Sir Hans Sloane Centre in Sir Hans’ birthplace Killyleagh, County Down, “a man of the church sent him a slave but Hans Sloane educated him and put him on a boat to France to get him on his feet." Ms Crilley acknowledged that some of Sir Hans’ money may have originated in slavery but that was not, she claimed, his fault; "Yes, he did get money, but how did he get his money? He fell in love with a woman. It was her father who was a slave trader. Are the sins of the father to be passed on to the children?" (Perhaps only if the money is!) 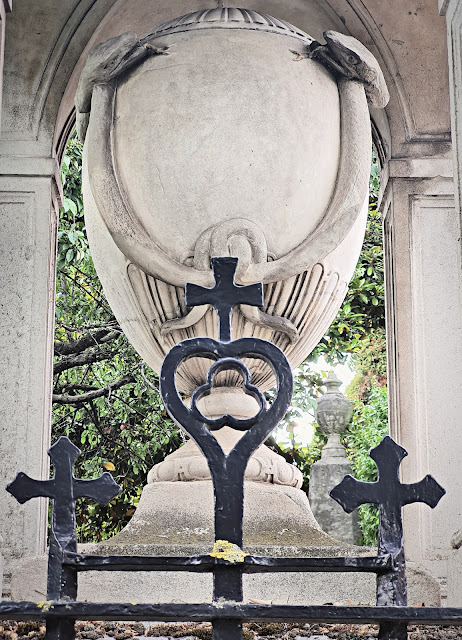 'Dedication to truthfulness when it comes to history is absolutely crucial,’ says Dr Fischer. In that spirit of truthfulness, it might be worth pausing to consider the life of Hans Sloane. Born in Northern Ireland in 1660, he studied chemistry and its medical applications, with particular interest in botany’s relation to physic. He became a doctor, and a great collector. When serving the governor of Jamaica, he systematically explored the topography of the island and recorded and collected its flora, bringing 800 specimens home to England. His published catalogue of the plants of Jamaica was probably the most truly scientific of his era in the genre, paving the way for Linnaeus. He was for 68 years a fellow of the Royal Society, taking charge of the publication of its transactions and serving as secretary. He succeeded Isaac Newton as its president. Sloane was also physician in charge of Christ’s Hospital in London, returning his salary to the place and supporting the cost-price dispensary of the Royal College of Physicians. As doctor to Queen Anne, he is credited with prolonging her life, thus securing the Hanoverian succession. He was a pioneer supporter of inoculation, popularised quinine and promoted the mixing of chocolate with milk in the cause both of profit and temperance. Sloane was noted for his learning, his consistent benevolence, his modesty and being very ‘attentive to Matters of Fact’. He conveyed the Chelsea Physick Garden, which he owned, to the care of the Society of Apothecaries. It flourishes beautifully to this day. The grateful society commissioned a statue and a bust of Sloane by Rysbrack. Sloane’s daughters presented these works to the British Museum. It is Rysbrack’s bust which Dr Fischer has now gleefully ‘pushed off its pedestal’, inviting visitors, as from this week, to disapprove of its subject.

In the Guardian David Olusoga placed a different emphasis on the facts of Sir Han’s life;

Every contrivance has been deployed to distance Sloane from slavery. As the wealth he accumulated from plantations in Jamaica came to him through marriage, it has been suggested that his involvement was merely tangential. Yet upon Sloane’s marriage to Elizabeth Langley Rose, one-third of the income from her plantations and her human property became his. In one of his letters, Sloane proudly talked of himself as a planter, the 18th-century euphemism for slave owner.

Those who have felt the sudden need to write hagiographies of Sloane have attempted to portray him as an almost accidental beneficiary of slavery, yet he not only grew rich from the sugar shipped from his wife’s Jamaican plantations, he actively invested in the slave trading South Sea Company. No matter how much we are asked to look only at his talents as a physician and his passion for botany and collecting, the fact remains that much of the money Sloane used to purchase the objects that today lie within our national museum came from the murderous exploitation of African men, women and children.

Sloane’s achievements remain undimmed, but while he stood on a pedestal the significance of slavery to his life and to his collection was rendered invisible. Acknowledging this unpleasant reality is all the museum has sought to do.

Sir Hans’ memorial in Chelsea Old Churchyard is rather splendid. It is in such a good state of preservation that I couldn’t help wondering if it is built of Coade stone. It isn’t according to the official Historic England listing: “Monument to Sir Hans Sloane, deceased 1753. Portland stone square pedestal with inscription and swags, surmounted by square, vaulted canopy, sheltering marble urn.” The inscription reads:

In memory of Sir Hans Sloane, Bart, President of the Royal Society and of the Collage of Physicians, who died in the year of our Lord 1753, the ninety-second year of his age, without least pain of body, and with a conscious serenity of mind eniled [sic] a virtuous and beneficent life. This monument was erected by his two daughters, Elizabeth Cadogan and Sarah Stanley 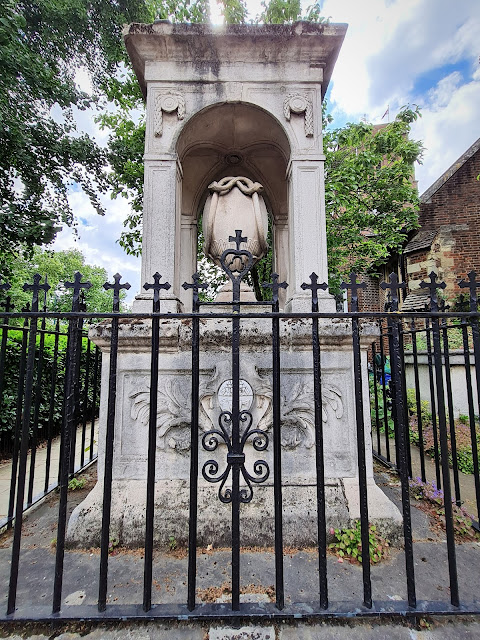