"Horrible Desecration of the Dead at St Pancras" 1866 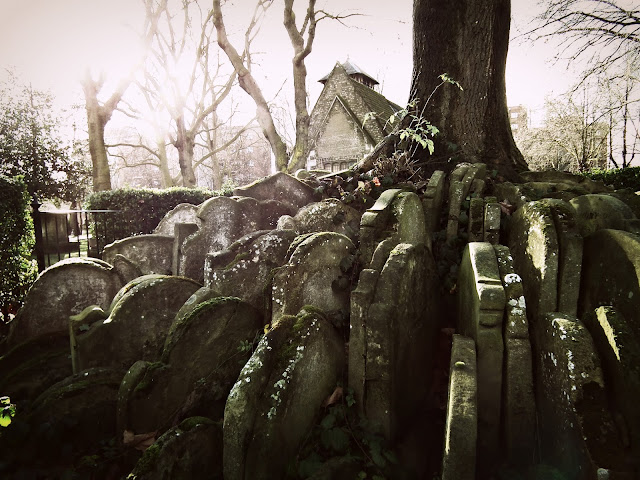 St Pancras Gardens on Pancras Road once formed part of two separate burial grounds – one for the parishioners of St Pancras itself and the other as an extension to the churchyard of St Gile’s-in-the fields (which is a couple of miles away on the other side of Covent Garden).  The site was not popular with residents of St Giles, one of them complained to the Churchwarden “I object to the burying-ground that is offered to this parish, for this reason, Mr Churchwarden, that I am sure that no man in his senses would go so far to be buried: In the next place, Mr Church-warden, I am told (for I know nothing but what I am told) that it is so improper a place for a burying-ground, that before a man can lay his head down in the ground, Mr Church-warden, he will certainly be drowned with water.' (The Times, March 8th 1780). Despite the objectors and the boggy ground 26,676 interments took place in the two burial grounds between 1827 and 1847. By 1850 a local resident was complaining to the Times of chronic overcrowding in the grave yard “more than 25 corpses have been deposited every week for the last 20 years in an already overcrowded space; and at this very time they are burying in it at nearly twice that rate….teeth, bones, fragments of coffin wood are seen lying in quantities around these pits.”


By 1854 the burial grounds had been closed and a decade later they were being eyed up by the Midland Railway Company as a possible site for a goods shed or to cut through for a planned mainline route into St Pancras station. By 1866 the plans had become a reality and work started on removing headstones and monuments and exhuming the countless corpses so that construction of railway arches and the laying of track could commence. In June the Morning Post reported that a ‘gentleman’ had attended Clerkenwell Magistrates to complain on behalf of the inhabitants of St Pancras Road of the stench arising from the work of exhumation:


[It] appears that within the past few days excavations have been going on at the east corner the St. Giles's Cemetery, which, it is stated, is the pauper portion of the burial-ground, for the formation of the Midland Railway, and that several coffins and a large quantity of bones have been exposed to public view. In some cases the coffins were perfectly sound, and on one of them being taken out it was broken, and it was stated that the body of a female was almost perfect and sound when it was first buried. In many cases decayed bones and skulls have been thrown up and about the ground, and in other instances they have been placed in a large box, but not buried. As there was doubt that this was a desecration of the dead, and such an act ought not to be tolerated, it was considered by the inhabitants of district that the matter should be made public. The stench was such that it was likely to be injurious to health. The applicant was referred to the sanitary department of St. Pancras

The story of the ‘horrible desecration of the dead’ at St Pancras made the pages of other newspapers during the following weeks. A journalist from the Maidstone Chronicle visited the works and reported to his readers “I saw many graves broken up, and their human contents—dead men's shanks, and yellow chapless skulls—packed higgledy-piggledy into a large wooden box. As one coffin was stove in by the blow the navvy's spade a, fair bright tress of hair was seen, and pronounced by the foreman of the gang to have belonged to a good-looking person, while another observed that the teeth scattered about would be a helpful ornament to many a living head. This ghastly merriment, speculation, and moralising may no doubt quite the delver’s own, but it forms a hideous marginal comment on the text of the burial service, whether as it stands now or according to the proposed alteration of my Lord Ebury; for such resurrection is not contemplated in either.”


The architect in charge of the exhumation works was Arthur Blomfield of Covent Garden. One of the architecture students working in his office was a certain Thomas Hardy, a young man from Dorset who later abandoned architecture for literature. Young Thomas Hardy was given the job of supervising the exhumations and the removal of gravestones from that part of the burial ground earmarked for the mainline into St Pancras. Person or persons unknown arranged some of the removed headstones into an interesting self supporting pattern surrounding an ash tree which stood close to the church. That person was unlikely to be Hardy himself but nevertheless the tree and its surrounding gravestones have been known as the Hardy Tree ever since. The experience almost certainly did influence the composition of one of Hardy’s poems, ‘The Levelled Churchyard”, written in 1882:

O passenger, pray list and catch
Our sighs and piteous groans,
Half stifled in this jumbled patch
Of wrenched memorial stones!


We late-lamented, resting here,
Are mixed to human jam,
And each to each exclaims in fear,
'I know not which I am!’


Hardy later recalled watching a coffin being exhumed with his mentor Arthur Blomfield. As it was lifted out of the grave the rotten casket broke apart letting a skeleton and two skulls tumble out into the mud. Years later when he ran across Arthur Blomfield again by chance "among the latter's first words were: 'Do you remember how we found the man with two heads at St. Pancras?'"