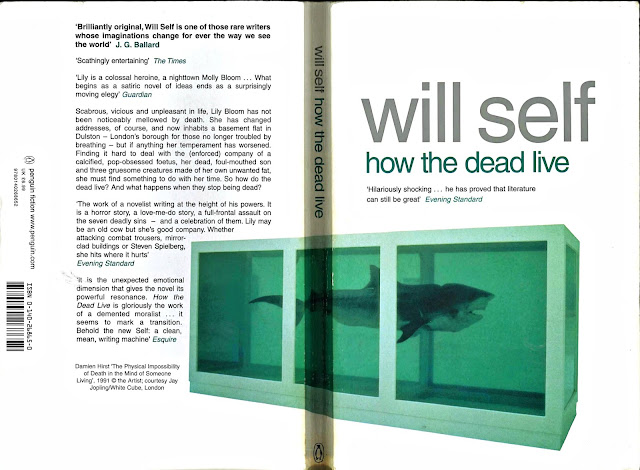 “It was a phone directory. North London Book of the Dead, ran the title; and then underneath: A-Z. The cover was the usual yellow flimsy card and there was also the usual vaguely arty line drawing – in this case of Kensal Green Cemetery. I started to leaf through the pages.”


The North London Book of the Dead, a short story in the 1991 collection The Quantity Theory of Insanity was Will Self’s first foray into imagining the world of the London dead.  The narrator loses his mother to cancer, has her cremated at Golders Green, suffers a profound depression but only when he starts to come to terms with his grief finds himself encountering her again firstly in vivid dreams, then in brief sightings on the street which always turn out to be cases of mistaken identity. Until one bleak, drizzly, Tuesday afternoon  ‘walking down Crouch Hill towards Crouch End’ he spots, on the other side of the road his mother ‘wearing a sort of bluish, tweedish long jacket and black slacks and carrying a Barnes & Noble book bag, as well as a large handbag and a carrier bag from Waitrose. She had a CND badge in her lapel and was observing the world with a familiar "there will be tears before bedtime" sort of expression.’ His dead mother invites him to tea to her new flat in Rosemont Avenue and half suspecting he has lost his mind, he goes to visit her two days later.  During that visit his mother explains what death is like:


“Well, it’s like this,” began Mother. “When you die you go and live in another part of London. And that’s it.”


“Whaddya mean, that’s it?” I could already see all sorts of difficulties with this radical new view of death, even if I was sitting inside an example of it. “Whaddya mean, that’s it? Who decides which part of London? How is that no one’s heard of this before? How come people don’t notice all the dead people clogging up the transport system? What about paying bills? What about this phone book? You can’t tell me this lists all the people who have ever died in North London, it isn’t think enough.  And what about the dead estate agents, who do they work for? A Supreme Estate Agent?  And why Crouch End? You hate Crouch End.”


“It could have been worse. Some dead people live in Wanstead.”


Almost ten years later, Self marked the millennium with the publication of How the Dead Live, (the title filched, quite openly, from a Derek Raymond thriller) the 15 pages of The North London Book of the Dead, had swollen monstrously into a 416 page opus narrated by the equally engorged character of mother, one Lily Bloom, an American born Londoner who dies in the opening pages but never shuts up, manically ranting until the exhausted Self ran out of printer ink or paper or his typewriter fell to pieces because if death won’t shut you up, little else will. After Lily dies in the London Ear Hospital she unexpectedly finds herself naked on Gower Street being accosted by an Aborigine spirit guide called Phar Lap Jones and then driven by a dead Greek Cypriot taxi driver to a new home in Dulston in North London  (if she had been slightly more respectable in life she would have probably found herself in Dulburb in South London).  Whilst her living daughters are left in the hospital to deal with the formalities of death certificates, burial arrangements and probate Lily finds herself joined in a squalid flat by the fossilised remains of a pregnancy she never knew she had, a pop obsessed lithopedion, (she is lucky, other woman who have suffered still births or miscarriages are united with their long lost foetuses which float around their heads still attached by the umbilical chord), three brainless blubbery beings formed from  the fat she has gained and lost over her life time and, eventually, by the ghost of her 9 year old son, who takes his time getting to Dulston because he has to find his way there from the States and once he is there sets about making his mother suffer for causing the accident which killed him in the early 60’s. In Dulston Lily finds an undemanding  job in a public relations company where no one minds that she is dead, attends night classes on being dead in the community centre,  and takes to haunting her still living daughters,  Natasha, a drug addled loser, and the haute bourgeoisie Charlotte.
The critics were not kind to How The Dead Live when it appeared. Tom Shone in piece in the New York Times called Something to Offend Everyone said ‘we get wave after wave of viscous imagery (''congealed reality . . . blubbery blancmange of an evidence''). Throw this book at a wall and it will stick.’  In the Observer Adam Mars Jones was even more cutting; ‘It may seem a perverse criticism of a book like How the Dead Live to say that it lacks vitality. But a book about fish doesn't have scales and a book about death needs a pulse as much as any other, perhaps more than most.’  I like Will Self, I don’t mind his many faults because, like Byron’s cup formed from a human cranium, one can “behold the only skull from which, unlike a living head, whatever flows is never dull.” I like Self’s crazed and very un-English ambition, his scribomania, his pretensions, the learning paraded for our admiration, the endless streams of jokes, puns and tortured sentences, his unwillingness to shut up. I find his vision of dead London horribly plausible and very funny. 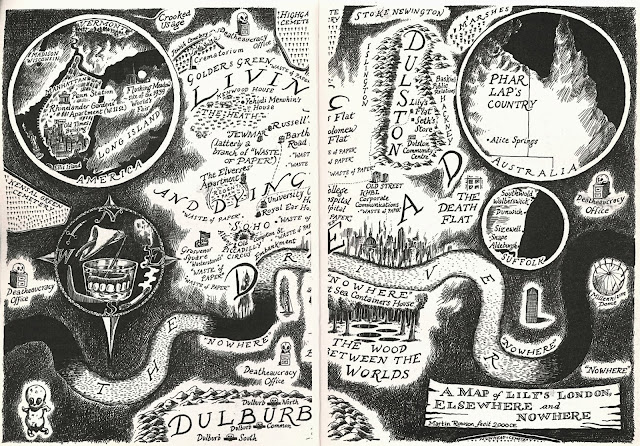