﻿
In 1707 Jonathan Swift played a celebrated practical joke on the successful astrologer John Partridge, publishing a fake almanac which predicted the fortune teller’s death of fever at 11pm on the 29th March 1708. The Dean of St Patrick’s went on to publish a famous account of the astrologer’s death (even though Partridge remained rather inconveniently alive) and later proof’s that, despite his public protests to the contrary, the astrologer was really dead. 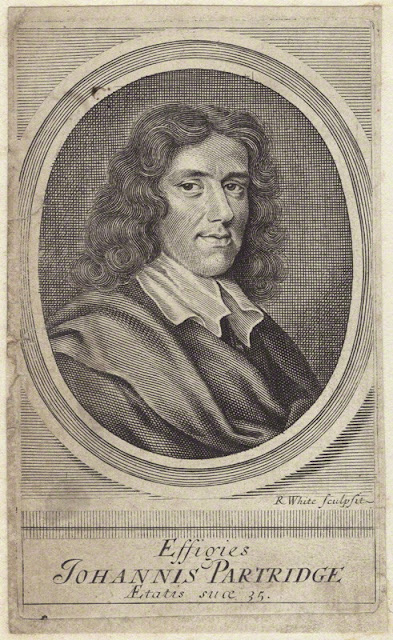 Here, five feet deep, lies on his back
A cobbler, starmonger, and quack,
Who to the stars in pure good will
Does to his best look upward still:
Weep, all you customers that use
His pills, his almanacks, or shoes.
And you that did your fortunes seek,
Step to his grave but once a week.

Elegy On the Supposed Death of Mr. Partridge, the Almanac Maker– Jonathan Swift


According to his vilifiers John Partridge was born John Hewson at an alehouse in East Sheen after his unmarried mother tarried too long in the taproom on a journey to London. Neither the insinuation of illegitimacy nor the sly hint of dipsomania on the part of his mother were true; John Partridge was born on the 18 January 1644 in East Sheen, the son of a Thames Waterman who was respectable enough to act as a sidesman (a sort of assistant churchwarden) and parish assessor but not rich enough to ensure his precociously intellectual son more than a rudimentary education or able to arrange for him a career more elevated than cobbler.  The young artisan taught himself Latin along with a smattering of Greek and Hebrew and sought instruction in medicine and astrology from local mages like Dr Francis Wright. Again his calumniators concocted baseless stories alleging that he had everything he knew of the zodiacal arts from John Gadbury, (“neglecting his shoes,” they said, “to attend on this fellow’s heels”), the lie meant to undermine him in his later public battles with the Oxfordshire soothsayer.  In his early thirties he left Sheen and moved to Covent Garden where he simultaneously plied his two main two trades, cobbler and astrologer. He published his first almanac from Henrietta Street, Covent Garden in 1678, the Calendarium Judiacum and then swiftly went on to publish a stream of astrological treatises including  Mikropanastrōn, or, An Astrological Vade Mecum;  Ekklēsialogia: an Almanack, Vox lunaris, (‘being a philosophical and Astrological Discourse of two Moons which were seen in London on 11 June 1679’) and Prodromus, ‘an astrological essay’.
In the 1680’s Partridge was increasingly drawn into politics, joining the Calves Head Club and practicing Whiggery almost to the point of republicanism. On the accession of the pro Catholic James II he prudently removed himself to the Netherlands from where he published An Almanack for the Year of our Redemption (1687) and Annus mirabilis (1688) under the transparent pseudonym John Wildfowl. These attacked James’  government and  declared that ‘a commonwealth's the thing that kingdoms want.’  In 1688 he went a stage further and used pseudo biblical prophecy in Mene Tekel to predict that King James would die that year. In November he returned to England joining the glorious revolution that put William of Orange on the throne.  Under the new protection of the new regime Partridge flourished and his annual almanac ‘Merlinus Liberatus’, became perhaps the most successful and widely read of the yearly flood of similar publications that hit the booksellers in the dying weeks of the old year. 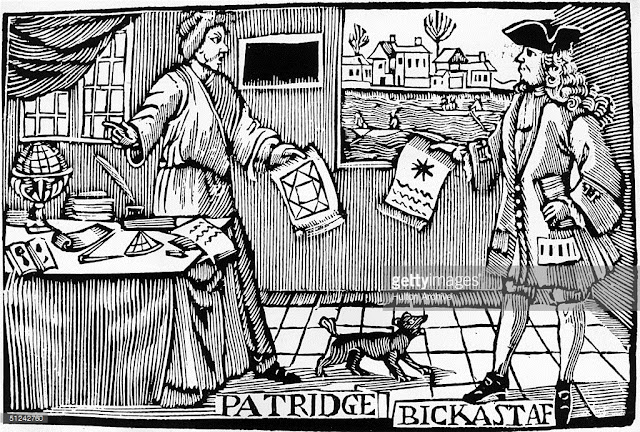