Cemetery Club presents 'Stories From The Stones: The Great & the Good of Hampstead Cemetery' 24th June 2017 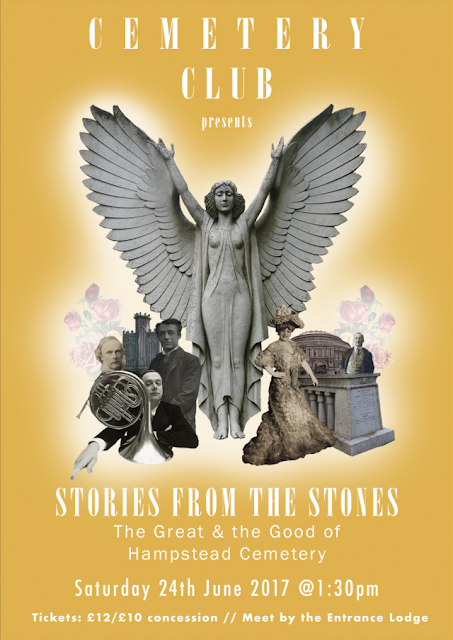 I was lucky enough to secure tickets for Cemetery Club’s recent sell out tour of Hampstead Cemetery.  Having failed to catch Sheldon and Sam locally at Tower Hamlets I had no choice last Saturday but to make the long haul out on the Jubilee line to Fortune Green Road, West Hampstead to see the eagerly anticipated  new tour ‘Stories from the Stones’.  This is my third cemetery tour; the other two were both of Highgate, one in the early 1990’s and the other a couple of years ago, both undertaken out of necessity rather than desire because the Friends of Highgate Cemetery won’t let you into the western half unless you join a guided tour. I rather resent being shepherded around places I would rather explore under my own steam but I like the Cemetery Club’s blog and I liked Sheldon when I saw him speak a couple of months ago at Greenwich University and so I was happy to park the prejudices of a lifetime and allow myself to become, temporarily, a sheep in his flock.

According to the brief biographical data on the Cemetery Club website Sam works in the entertainment industry by day but devotes her nights to cemeteries (perhaps they don’t put it quite like that…. free time is perhaps what they call the hours when she is not at work).  She was a guide at Highgate for 12 years (she definitely wasn’t the guide on my last tour there though, unfortunately) and is a blogger and independent researcher whose focus is “quirky characters, Victorian mourning customs and social history, particularly social history pertaining to London’s dark underbelly.” Her guiding and cemetery partner Sheldon is a qualified City of Westminster Guide who drudges in HR by day but “by night his passion is the past, our changing landscape and what went before us.”
The tour started at 1.30 sharp which meant that I missed the first grave as I was five minutes late. Sam and Sheldon took turns showing us noteworthy resting places and interesting memorials and the group trailed after them around the cemetery like ducklings following their mother.  Sheldon was on first but I missed almost everything he said and so have no idea who he was talking about. Sam then took us of down the main path towards the chapel and, after pausing to note the Frankau memorial and the Egyptian themed tomb of James ’Pasha’ Wilson,  introduced us to Frederick Hengler a circus proprietor and riding instructor to the Royal Family (whose father Henry worked for Andrew Ducrow) which lead on to a fascinating digression about the attempts of the British navy to train sea lions for military uses during the Second World War (the link being the sea lions and Hengler being someone who once worked for his son Charles if I understood the story correctly).  Sheldon ushered us on a few yards to admire the tomb of the euphoniously named Archduke Mikhail Mikhailovich, a grandson of Tsar Nicolas 1st of Russia whose attempts to find a wife to please his mother Sheldon managed to turn into a comedy. 10 yards away lies Fred Gaisberg, American born musician and artistic director of HMV in the very earliest days of recorded music.


During the next hour and a half we became acquainted with the last resting places (and these are just the ones I remember) of a plethora of the great and good; Banister Fletcher the architect, Florence Upton creator of the Golliwog (I find myself strangely fascinated by this woman, I may return to her at a later date),  Joseph Lister the pioneer of antiseptic surgery, Kate Greenaway the illustrator, Sebastian de Ferranti electrical engineer on the fledgling London Underground, Dame Gladys Cooper, actress (Rex Harrison’s mother in ‘My Fair Lady’ and later star in three episodes of the legendary ‘Twilight Zone’), the Short brothers, aviation pioneers  (Horace, I think, was the one who was kidnapped and worshipped  by cannibals),  Alan Coren, the TV pundit, Dennis Brain the French horn player, Andrew Fisher, Australian premier, and Arthur Prince ventriloquist. We weren’t able to see some of the graves up close – as in most London cemeteries Hampsteads grave markers stand at crazy angles threatening to topple over or collapse into the vaults beneath them. We were a large group (it really was a sell out tour) and allowing a herd of curious taphophiles to blunder around a closely packed patch of crumbling masonry could only have led to disaster. Instead Sam dispatched Sheldon to pick his way between the headstones and point to the one under discussion.


The hour and a half went very quickly – Sam and Sheldon are knowledgeable, enthusiastic and entertaining guides and it was a pleasure to accompany them around the cemetery. The finale to the visit was provided by Sheldon whose studious exterior appears to conceal a suppressed exhibitionist waiting for any excuse to burst out. The grave of Marie Lloyd provided the pretext. Sheldon firstly apologised for having to perform acapella and without a costume as he had originally planned to be accompanied by a friend on the banjo and wearing some frothy lace concoction; the friend had begged off and he had had second thoughts about the dress. He then launched into Miss Lloyd’s classic ‘When I take my morning promenade.’ His delivery was, at the beginning, affected by a degree of nervousness; hardly surprising when singing in a cemetery in front of a crowd of strangers who were all probably slightly uncomfortable and not really sure what was going on.

Since Mother Eve in the Garden long ago
Started the fashion, fashion's been a passion
Eve wore a costume we might describe as brief
Still every season brought its change of leaf...

By the end of the first chorus the nerves were rapidly falling away, half way through the second verse there were the first signs of bodily movement that had turned by the middle of the second chorus into the definite shaking of an invisible dress apparently gathered up by the hem to reveal a shapely calf and ankle. By the end of the third chorus he had the audience joining in:

When I take my morning promenade
Quite a fashion card, on the Promenade
Oh! I don't mind nice boys staring hard
If it satisfies their desire...

Now that is a truly impressive achievement. 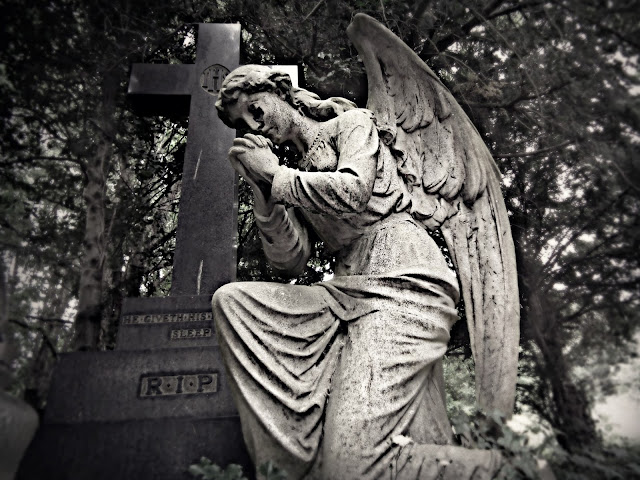