Andrew Ducrow’s Graeco-Egyptian mausoleum, was supposedly designed for his wife, but his epitaph says that he lies "within this tomb erected by Genius/for the reception of its own remains." Even in 1856 it was considered to be over the top. A critic in The Builder called it “a piece of ponderous coxcombry."

Andrew Ducrow was born on the 10th October 1793 at the Nag’s Head in Southwark. His father was a circus strong man from Bruges known as the Flemish Hercules who could “lying on his back…with his hands and feet support a platform upon which stood eighteen grenadiers.”  Andrew and his siblings were brought up to be performers; they started learning the trade at the age of 3 moving from vaulting to tumbling, dancing on the slack and tight rope, balancing, riding, fencing, and boxing. By 1808 at the age of 15 Andrew was already chief equestrian and rope dancer at Astley’s Royal Amphitheatre at a salary of £10 a week.  His rope dancing might have been good but it was for his innovative equestrian acts that he became famous. At the age of 19 he was performing the ‘Flying Wardrobe’; dressed in rags and behaving like a drunkard he cantered around the ring making false falls from the horse and gradually removing ripped jackets and torn waistcoats until he revealed himself as the star rider of the show. The frisson detectable beneath the laughter as Andrew removed his clothes perhaps inspired the later development of the act where Andrew and his sons would dress in flesh coloured body stockings and strike poses known as ‘plastiques’, designed to show off their physiques, whilst balancing on the rump of white stallions. 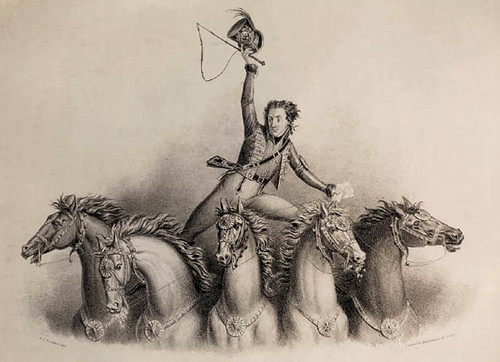 After travelling and working in France and Belgium he returned to England to create the spectacular horse shows that led to him being dubbed the Colossus of Equestrians. At Astley’s he staged equestrian dramas like his famous version of ‘Mazeppa’ and novel routines like ‘the Courier of St Petersburg’ (“A rider straddled two cantering horses while other horses bearing the flags of the countries through which a courier would pass on his way to Russia passed between his legs.”) So successful was his act that eventually he became co-proprietor of Astley’s,; it was the responsibility of ownership that killed him. With a staff of 150 and weekly expenses of £500 when the Amphitheatre burnt down in 1841 he suffered a breakdown with the worry. According to the 1900 edition of the Dictionary of National Biography “Ducrow's mind gave way under his misfortunes, and he died at 19 York Road, Lambeth, on 27 Jan. 1842. His funeral, attended by vast crowds of people, took place on 5 Feb. in Kensal Green cemetery, where an Egyptian monument was erected to his memory. Notwithstanding his losses he left property valued at upwards of 60,000l.”

Ducrow’s exuberant mausoleum  in Kensal Green cemetery does its best to exhaust the whole range of Victorian mortuary symbolism. Wreaths and inverted torches form the iron railings around the tomb, there are draped urns, broken columns (including one with a hat and a pair of gloves draped across it), Egyptian columns, angels, winged horses, a beehive (masonic symbol of industry), military colours lowered over an infantryman’s cap, sphinxes, seashells, and melancholic females in figure revealing drapery. 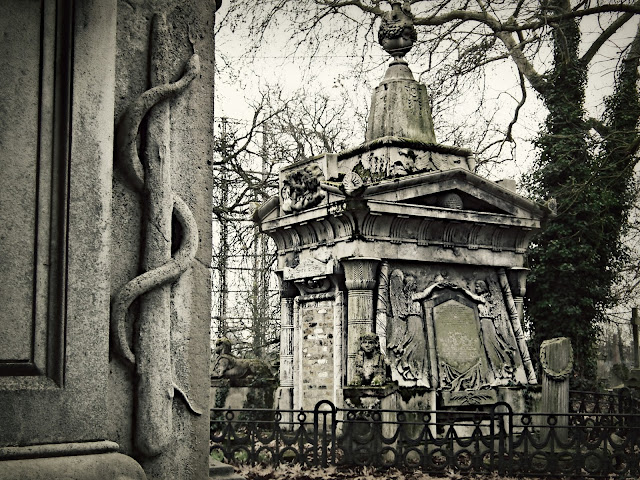