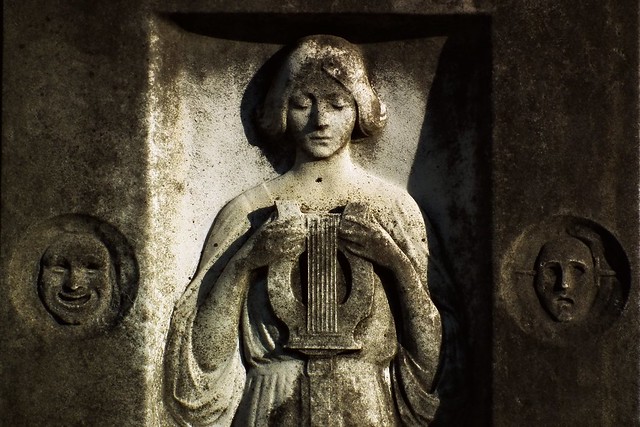 This headstone belongs to Gilbert Laye 1866 to 1926 and was put up by his 'devoted wife'. It took me a while to find out anything about him but he was an actor/composer/theatrical manager. Not a massively successful one - the only credits I can find for him are a part (with his 16 year old daughter - more of her in a minute) in "Oh Caeser" at the Royal Lyceum Theatre, Edinburgh and on Broadway where he directed "My Lady Molly" at Daly's Theatre in January 1904. His devoted wife was Eva Stuart Froud aka Evelyn Stewart or Mrs Gilbert Laye. Her death was reported, of all the most unlikely places, in the Broken Hill (NSW) newspaper 'Barrier Miner' on the 7th November 1951:
Evelyn Laye's Mother Dead
London, November 6.
Mrs. Gilbert Laye, mother of actress Evelyn Laye, died in Bournemouth after a long illness. Evelyn Laye opened in Sydney on Saturday night in "Bell, Book and Candle.”
The only other faintly interesting internet trace I could find was the notice of a lot sold at Sotheby’s in South Ken for £173 on the 4th November 1997:

The Evelyn Laye who owned the gold pencil was Gilbert's daughter and the lot was sold the year after her death in 1996 after a long and distinguished theatrical and film career (including her stint in Sydney in "Bell, Book and candle.") She was George VI's favourite actress as the linked article explains. Is it just me or is this article insinuating that she might have been his mistress?
http://www.dailymail.co.uk/femail/article-1206431/Revealed-time--woman-Queen-Mothers-marriage.html