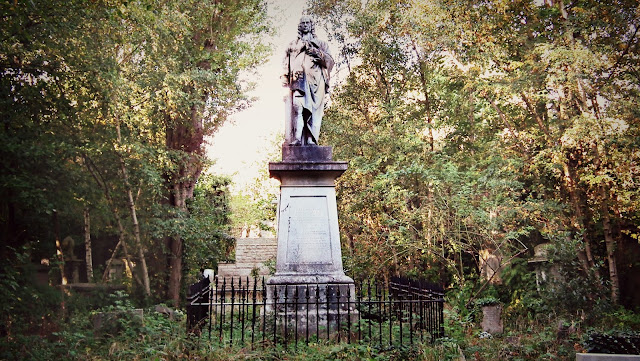 Isaac Watts (1674 to 1748) is actually buried in the non conformist Bunhill Fields but his statue presides over Abney Park Cemetery which was partly built on land belonging to Abney House, the home of Sir Thomas Abney. Watts attended the Dissenting Academy in Stoke Newington and then after a short break away to live and work in London, he returned to live there for the rest of his life, first in the house of the Hartopp family in Church Street where he worked as a tutor and then at Abney House to keep Sir Thomas’ widow company when her husband died. Although well thought of as a logician it is as a hymn writer that he is mainly remembered. His talent for versifying appeared at an early age. When apprehended in the heinous sin of keeping his eyes open during prayers he explained his actions with a hastily improvised couplet, compounding his original offence with the far worse felony of frivolity:

“A little mouse for want of stairs
Ran up a rope to say his prayers.”

His stern but fond father was having no mice as excuses for such atrocious behaviour and no versifying to compound the matter and did what any decent god fearing person would do, he thrashed him, energetically. Isaac’s response to the slaps kicks and buffets of his pater was:

“Oh father, father pity take
And I will no more verses make.”

Whether his father let him off or not history does not record but the incident was not the end of Isaacs obsession with the rhyming stuff. He is credited with 750 hymns (including ‘When I surveyed the Wondrous Cross’ as well as reams of admonitory verse for children and young people. One of his most famous is ‘Against mischief and idleness’:

How doth the little busy Bee
Improve each shining Hour,
And gather Honey all the day
From every opening Flower!

How skilfully she builds her Cell!
How neat she spreads the Wax!
And labours hard to store it well
With the sweet food she makes.

The celebrated mathematician and paedophile Charles Dodgson (often known by his pseudonym Lewis Carroll) deftly subverted Watt’s original with an even more famous parody in ‘Alice in Wonderland’.

How doth the little crocodile
Improve his shining tail,
And pour the waters of the Nile
On every golden scale!

How cheerfully he seems to grin,
How neatly spreads his claws,
And welcomes little fishes in
With gently smiling jaws!