The Man Who Was Pisanus Fraxi; the secret life of Henry Spencer Ashbee (1834-1900) Kensal Green Cemetery 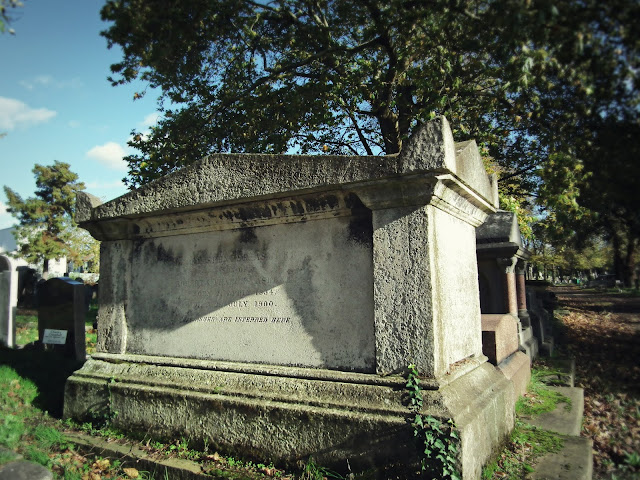 Henry Spencer Ashbee died on 29 July 1900 at the age of 67 at his home Fowlers, in Hawkhurst, Kent. His unmarried cousin Louisa Maud Ashbee was with him when he died, his wife and children were not. His death certificate states the cause of death as being ‘myocarditis and cirrhosis of the liver’.  He had had left explicit instructions on what was to happen to his mortal remains after his death; “I desire to be cremated in as inexpensive manner as possible. I do not wish any mourning worn for me or other demonstration made nor do I desire that any monument whatsoever be erected to my memory.” In accordance with the first part of his instructions he was cremated at Woking on 01 August. “Carefully, however, as he seems to have considered everything, here he made an omission,” wrote his friend Ralph Thomas later that year, “for he did not provide that the ashes should not be kept; probably he did not know that it was necessary.” The day following the cremation the still warm ashes were taken to west London and placed in his parent’s tomb in Kensal Green; almost definitely not the last resting place that he had in mind.  For years Ashbee had kept the details of his double life a secret but his obituary in the Times, published on the day of his modest obsequies, wasted no time tearing back the veil; he was, it said “a well-known City merchant who achieved a considerable reputation as a book collector and bibliographer. His most important, though perhaps least known, compilation was an exhaustive account of curious and out-of-the-way books, entitled "Index Librorum" &c., and was privately printed in three volumes between 1877 and 1880 under the pseudonym of ‘Pisanus Fraxi.’”  ‘Curious and out of the way books’ is a euphemism for pornography; Ashbee was an obsessive reader, collector and cataloguer of Victorian erotica.

Ashbee was born on 21 April 1824 at 24 Blackfriars Road, Southwark the only child of Robert Ashbee and his wife Frances Elizabeth Spencer. The family moved to Hounslow when his father became manager of the Curtis and Harvey gunpowder mills. At 14 his father enrolled him into the Kensington Proprietary Grammar School in Kensington Square, possibly to prepare him for a commercial career as he did not go to University. He seems to have left school at 16 and in the 1851 census he is described as an ‘auctioneer and estate agent.’ Shortly afterwards he became an apprentice at Groucock, Copestakes, Moor & Co of 5 Bow Church Yard, manufacturers of lace and sewed muslin.  In his early twenties he began travelling on the continent, to Belgium, France, Portugal and Spain, for business and pleasure. It was probably on these foreign sojourns that he began to collect erotica. On 27 June 1862 he was married, in Hamburg, to Elizabeth Josephine Lavy, the daughter of a German Jewish merchant and his English wife. He was 28, she was 21 and his father-in-law’s wedding present to the couple was to set up a branch of his business in London with his son-in-law at the helm. Charles Lavy & Co premises were at 9 Bow Road and Ashbee soon proved himself to be a conscientious and competent manager of the family business. He initially settled his new family, he and Elizabeth were to have four children, three daughters and one son, in Isleworth but from 1865 they moved into 46 Upper Bedford Place, Bloomsbury, a short walk from the British Museum.

Ashbee was an obsessive bibliophile; his twin passions were for the works of Miguel de Cervantes Saavedra and for the generally anonymous productions of the Victorian pornographic industry. While Mrs Ashbee may have occasionally been inconvenienced and irritated by her husband’s numerous dusty editions of the Novelas ejemplares and El ingenioso hidalgo Don Quixote de la Manch, it is pretty certain that he was careful to keep his collection of more recondite literature a secret. In fact, he rented chambers three quarters of a mile away from the family home, at 4 Gray’s Inn Square, just to keep his erotica private. His chambers also served as a venue to hold weekly dinners where he entertained friends who shared his taste for curious and out of the way books. These friends included, Richard Monckton Milnes (Lord Houghton), Algernon Charles Swinburne, Frederick Hankey and Richard Burton the explorer (Ashbee worshipped him); all of them had a predilection for the ‘English vice’ of flagellation. Generally speaking, aficionados of pornography are, by habit and inclination, wankers and Ashbee was no exception. Unlike his father, who had kept a mistress in town and fathered at least two children with her, Ashbee seems to have kept the majority of his erotic life in-between the sheets of the marital bed and in his imagination. His obsession found an outlet in the writing of The Index Librorum Prohibitorum: being Notes Bio- Biblio- Icono- graphical and Critical, on Curious and Uncommon Books self-published in 1877, followed up by the Centuria Librorum Absconditorum in 1879 and the Catena Librorum Tacendorum in 1885. These bibliographies contained detailed résumés of the plot and contents of hundreds of pornographic works, liberally salted with long quotations and, of course, full publishing details of all the editions of the works in question. The 520-page Index was printed in large quarto on heavy toned paper using an array of different typefaces and decorative flerons, with the titles of the works under discussion printed in red, and an elaborate frontispiece. The 250 copies of the book were bound in red pigskin with the title and authors name stamped in gold on the spine.

Ashbee’s domestic life took an unfortunate turn as his children became older and Elizabeth grew tired of his fusty conservatism. He disagreed with his wife’s insistence on ‘excessive education’ for his daughters and her pro-suffragism. He disagreed with his son Charles over art and the modernist tendencies of the pre-Raphaelites. Charles was gay and although it is not clear whether he ever shared this fact with his father their relationship deteriorated once he reached adolescence. In arguments with his children his wife inevitably took their side and Ashbee found himself increasingly estranged from his own family. On the anniversary of his silver wedding, he noted in his diary “one of the most unhappy days I ever spent, let me forget it.” In 1891 Elizabeth moved out of the family home in Bedford square taking her two daughters with her. 18 months later, in January 1893, a formal Deed of Separation was drawn up making it clear that there was to be no reconciliation. Ashbee took his revenge after his death, via his will. The St James Gazette reported that “by his will, of the 28th June last, Mr. Henry Spencer Ashbee, of Fowler’s Park, Hawkhurst, and of 119 and 120, London-wall, F.S.A., great traveller, and a book collector and bibliographer, who died on the 29th July last, aged 66 years, leaving personal estate valued at £62,989 15s. 2d., bequeathed to the executors £312 year to allow to each of his daughters 40s. a week on her application for it, if she shall not be then living with a relation whom he named, and if the executors shall satisfied that such daughter, owing to illness, infirmity, or other circumstances, is unable to earn her own livelihood.” The carefully calculated insult of the 40-shilling allowance (no doubt to be handed over as 20 two bob pieces of silver) would only be paid if his daughters were otherwise completely indigent and were not living with their brother Charles. He left his collection of paintings and drawings to the National Gallery and the V&A and his collections of antiquities and curiosities to the British Museum. His curiosities included his books but he stipulated that the Museum could only keep his Cervantes collection if it also took his erotica; his pornography collection joined, indeed probably swamped, the famous private case in the museum library which swelled to over 4000 items after the bequest.

I first came Ashbee in Ronald Pearsall’s 1969 classic work on Victorian sexuality “The Worm in the Bud.” Also of interest if you are remotely fascinated by the world of Victorian smut is Ian Gibson’s 2001 biography of Ashbee “The Erotomaniac”. Gibson’s book benefits from access to Ashbee’s diaries which had been kept in the family and not previously made public and from an acquaintance with Gershon Legman an expert on Ashbee that Gibson met in Provenced in the late 1970’s. Legman was convinced that Ashbee wrote “My Secret Life”, an 11-volume sex memoir ostensibly written by a gentleman called ‘Walter’ and published privately in the late 1880’s. Over 4000 pages and using more than a million words Walter describes in painstaking detail the sexual experiences of his entire life from adolescence to senescence involving hundreds of women and apparent total recall. Some believe the work is a genuine memoir, others that it is a work of erotic fiction. The original edition comprised a print run of just 25 copies of each volume; it was published in its entirely as a reprint in 1966 by the Grove Press in the USA but not until 1995 in the UK. Gibson was convinced of Ashbee’s authorship of the book by Legman and the second half of “The Erotomaniac” is spent presenting the heavily circumstantial case. Gibson believes that if Ashbee is the author then the book is a sexual fantasy from start to finish, as you would expect from a man who spent most of his spare time with his nose in a dirty book.