"One of the two natives of Botany Bay is dead, his companion pines much..."; Yemmerrawannie Kebbarah (1775-1794) St John the Baptist, Eltham 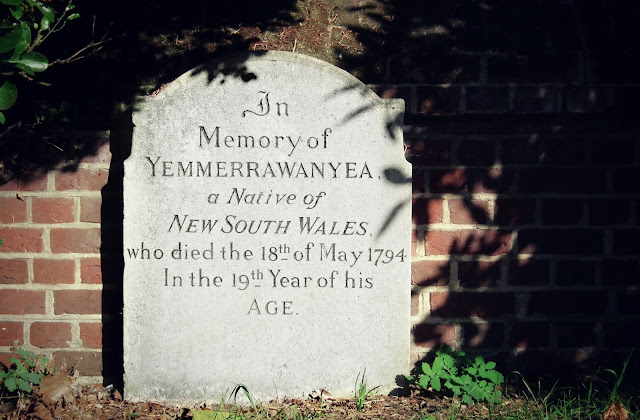 Lisbon 27 July: They write from Rio de Janeiro that on the 6th of February there arrived in that port the English ship named the Atlantic. Captain Bowen who had made a most happy voyage from the port of Jackson in New South Wales had made his passage through the Pacific Sea, skirted Cape Horn and afterwards arrived at Rio de Janeiro, all in less than 58 days. Travelling in the said ship was Arthur Phillip, the first Governor of that remote possession that is already showing great promise of becoming a grand colony. This celebrated official (well known, for having served in the Portuguese Navy) amongst the many animal curiosities and collections of the products of nature also brought two native men of the new country, well proportioned and of a similar colour to the blacks although with less curly hair. They are of a docile disposition, always willing to oblige when asked to show their dances and their other peculiar customs, and have a great facility for the pronunciation of Portuguese. The said ship will continue its voyage on 3rd of March.

St John the Baptist in Eltham has a very large, and wildly overgrown, churchyard but the only memorial to attract much interest these days is a plain grey late 18th century headstone which has been removed from the original grave site and now stands propped against the bricks of the churchyard wall. The inscription reads ‘In Memory of Yemmerrawanyea, a Native of New South Wales, who died the 18th of May 1794 In the 19th Year of his Age.’ Yemmerrawannie was a member of the Eora nation who came to be part of the household of Arthur Phillip the first Governor of New South Wales. He was brought to England by Phillip along with an older man Woollarawarre Bennelong in 1793.

Nothing is known of Yemmerrawannie’s childhood or how he came to be in the service of the Governor. His friend Bennelong had been abducted from his community on the orders of the Governor in November 1789 by Lieutenant William Bradley who later said “'it was by far the most unpleasant service I was ever ordered to execute”, and painted a watercolour showing the moment when a small group of British soldiers wading in the shallow waters of the Parramatta river manhandle Bennelong and another man Colebee, into a waiting skiff where just one man stands with a musket while the rest are at the oars eager to make a getaway. Along the banks a throng of spear wielding Aboriginal warriors menacingly make their way to the waters edge and their canoes to try and rescue their compatriots. Bradley somehow made it out alive from this unpromising scenario and made it back to Sydney Cove with his captives.  Bennelong became a key figure in the fraught relations between the British and the Aboriginal people of the coast and was forgiven even a misunderstanding that led to the accidental spearing of Governor Phillip at a whale feast in 1790. Our first glimpse of Yemmerrawannie comes in the journal of Captain Watkin Tench who in September 1790 describes him as “a slender fine looking youth ... about sixteen years old.” The fine looking youth was missing a front tooth which had been bashed out with a stone during an initiation ceremony during which he had “`suffered severely” according to Tench but still “`boasted the firmness and hardihood, with which he had endured it”. The ceremony had made him eligible to marry and the colonists did their best to match-make by encouraging him to make advances to an Aboriginal girl called Boo-ron who lived with the family of the Rev. Richard Johnson. Tench relates what happened next; “the lad, on being invited, came immediately up to her, and offered many blandishments, which proved that he had assumed the toga virilis. But Abaroo disclaimed his advances, repeating the name of another person, who we knew was her favourite. Imeerawanyee was not easily repulsed, renewing his suit later with such fervour as to cause an evident alteration in the sentiments of the lady.”

When Governor Phillips returned to England in 1793 he took Bennelong and Yemmerrawannie with him. He seemed to have been nursing the idea of taking Bennelong for some time; in 1791 he had written to Sir Joseph Banks “I think that my old acquaintance Bennillon will accompany me whenever I return to England and from him when he understands English, much information may be obtained for he is very intelligent”. The decision to take Yemmerrawannie may have been more last minute. The three set sail from Sydney Cove on the convict transport HMS Atlantic on 10 December 1792. They reached Rio de Janeiro on 6 March and rested there until 3 March before continuing the voyage. On 3 April, the Atlantic crossed the equator and the usual naval ceremony on crossing the line took place with ‘Neptune’ appearing on deck in homespun regalia and the ribald crew coaxing the startled Bennelong and Yemmerrawannie to touch it. HMS Atlantic reached Falmouth on 21 May and Governor Phillip immediately made his way to London with his two charges.

Governor Phillip has brought home with him two of the natives of New Holland, a man and a boy. The Atlantic has also on board four kangeroos, lively and healthy, and some other animals peculiar to that country. From the description given of the natives of Jackson’s Bay, they appear to be a race totally incapable of civilization, every attempt to that end having proved ineffectual; and yet they discover an astonishing art and cunning in their mode of fishing, and entrapping the kangeroo and birds, the only animal food to be found there. Specimens of their fishing-tackle, spears, and shields, are likewise brought home in the Atlantic. They are ingeniously contrived, and the natives are said to use them most expertly; but no inducement, and every means have been perseveringly tried, can draw them from a state of nature. Cloathing they consider as an incumbrance, and every European production they treat with the utmost indifference. They are cruel, particularly to their women, whom they beat in a most barbarous manner on every occasion. 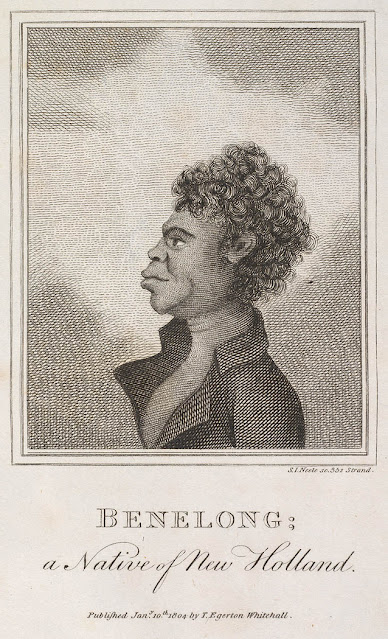 Initially the two Australians were moved into board and lodging costing 3 shillings a day with a servant in attendance and a washerwoman to launder their clothes. Governor Phillip also spent £30 on a new wardrobe for them; both were dressed fashionably but identically in one of two coats “(one green and one of pepper-and-salt mixed cloth), a blue and buff striped waistcoat, a pair of slate-coloured ribbed worsted knee breeches, silk stockings to wear with the breeches, two pairs of fine cotton under-waistcoats faced with spotted muslin dimity, a fine double-breasted spotted quilting waistcoat, a pair of drab-coloured striped breeches and a pair of botelles each.” (Jack Brook, 2001). In July they moved with a Mr Waterhouse, of Mount Street, Grosvenor Square, and the services of a `Reading Master' and a `Writing Master' were acquired to school them. In horse-drawn coaches and carriages the pair were taken, just like any modern tourist, to see the marvels of London; the Tower, St Paul’s, boating and bathing in the Serpentine (the latter activity not recommended these days) and on 15 August, resplendent in new gloves and walking canes they were escorted to Sadler’s Wells Theatre where they saw acrobats, a stirring military re-enactment called ‘Honours of War or The Siege of Valenciennes’ whose finale was the storming and surrender of the town to British troops, followed by a tightrope walker and ending with a comic entertainment called ‘Pandora's Box or The Plagues of Mankind’. By September it was clear to even casual observers that something was not right with the two men; they were seen walking near Mount Street looking frail and dispirited, unable to walk ‘without the support of sticks’ and looking ‘scarcely human’. Yemmerrawannie in particular appeared ‘much emaciated’, said the Observer, adding “they seem constantly dejected, and every effort to make them laugh has been for many months ineffectual”. In October they were taken to Parkinson’s Museum on the Blackfriars Road for an educational outing where they were seen by a 19 year old Robert Jameson who noted in his diary that they had “large mouths, thick lips and ill formed legs” and “seemed to affect a kind of cheerfulness that was far from being real”.

Just a week after their visit to the museum both men were driven down to Eltham in what was then rural Kent to stay at the house of Mr Edward Kent, presumably in the hope that in the fresh air and bucolic atmosphere of SE9 would set them on the road to recovery. Yemmerrawannie was the real cause for concern but both men rallied enough to return to London in early December. It was a mistake and in the cold and noxious atmosphere of London Yemmerrawannie was soon ill again and his concerned guardians called in a Dr Blane to see him. Dr Blane put all the resources of 18th century medicine at his patient’s disposal; the young Australian was purged, poulticed, bled and blistered. He was prescribed daily draughts of aloes, scammony, and extract of colocynth, he was prescribed Dr. Fothergill's Pills and he was given concoctions of bark and ‘decoctions sepcatic’. He was given laxatives, he was leeched, he was given every treatment the good doctor could think short of surgery but still the young man insisted on sinking daily into an even graver condition. Despite his sickness he insisted on accompanying Bennelong on the never-ending educational visits, to the Houses of Parliament, to Covent Garden and to the theatre. At the end of April a post chaise was hired to take them back to Eltham; Yemmerrawannie was now very seriously ill indeed. He died on 18 May 1794 and was buried three days later. The entry in the burial register reads `May 21. Yemmorravonyea Kebarrah, a Native of New South Wales, died May 18 1794, supposed to be aged 19 years, at the house of Mr Edward Kent'.  Jack Brook says “This is the only documentation on which the word `Kebarrah' appears. Bennelong would be the only person to have suggested the addition of the name, one undoubtedly of some significance. Dixon et al (1990:154-5) explain kebarrah as `an Aboriginal male who has been initiated into manhood [or] the ceremony in which such an initiation takes place'”. He was buried in the churchyard and a headstone was purchased for the grave; it cost £6 6 shilling and sixpence. On 31 May the Oxford Journal reported that “one of the two natives of Botany Bay, who came over with Governor Philips is dead. His companion pines much for his loss.” Bennelong returned to Australia in July sailing out with the new Governor, Vice-Admiral John Hunter.