All die while I, a poor unprofitable worm, am still spared; "A History of Death in 17th Century England" by Ben Norman (Pen & Sword £12.99) 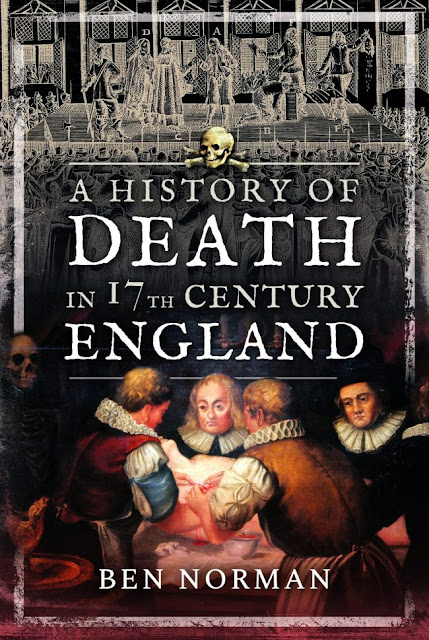 In 1673 the 49-year-old, ex-parliamentarian soldier, Sir Edward Harley had survived the restoration of the monarchy and was the MP for Radnor in the Cavalier Parliament. Judging by the tone of the “retrospect of his life on entering his fiftieth year” that he composed to mark his imminent half century, he was mildly surprised to find himself still alive; “O Lord! in thy hand is the breath of all mankind, and it is only God who holdeth our soul in life. But in most special manner I ought to praise my God, who preserved me from abortion at Burton-under-the-Hill.” Having made it safely through the dangers of childbirth, he narrowly avoided death during his childhood “from the chin-cough, measles, smallpox twice, and danger of drowning in the moat.” Adulthood proved to be equally as hazardous, “from many perils in the wars, particularly when my horse was shot, when my arm was hurt, when a muskett-bullett, levelled at my heart, was bent flat against my armour.” Then there were the “many dangerous falls on horseback I have had, specially when I was wonderfully preserved, my horse stumbling and falling into a ditch near Orleton, in frosty weather” and in 1647 “I was preserved from the plague, of which my servant died, and at the same time recovered from a dangerous pestilential fever.” There were more diseases to follow, a “long, lingering distemper” in 1649, a “grievous ague” in Devonshire in 1654, the gout and a rupture “by which I was for many years kept humble and from many temptations” which resisted the efforts of physicians and chirurgeons to cure it but which “it pleased God to heal…without any remedy whatsoever, so that I have been perfectly well for several years.” Apart that is from “in January at Westminster I was visited sharply with the griping of the gutts, but when I was under sentence of death it pleased God to cheer and raise me up.” God was so busy looking after Sir Robert that he had little time to take care of his friends “this year is now concluded to me in health, though it hath in every month of it been full of sorrow. Many dear friends taken away. After the death of Sir Robert Moray and my cousin Froysell, it pleased God to put an end to the pilgrimage of my brother Sir Robert Harley, Nov, 1673.” And the roll call of fatalities goes on, his friend Thomas Doughtie, in April Sir Edward Massie, cousin Bartholomew Beal, in August his niece Frances Fitz-James (“of the small-pox”), Thomas Treherne and cousin Reads wife (“both dead in the same day”) and now his sister Palmer “while I, a poor unprofitable worm, am still spared.” Sir Edward was clearly a man with a strong sense of his own mortality, who saw himself as engaged in a constant skirmish to evade the reaper’s scythe but the unprofitable worm battled on for more than another 25 years, dying at the advanced age of 76 on 18 December 1700.

Sir Edward Harley makes for an inspired opening to Ben Norman’s book on death in the 17th century, drawing together several of his themes; war, disease, mourning and the ever-present awareness of the impermanence of life and the imminence of death. That Sir Edward lived to what was then a ripe old age is beside the point; everyone in a society where the average life expectancy was a mere 38 years, where 13% of children died before they were a year old and only 20% of the population made it into their forties was on a more intimate footing with death than the authors lucky readers. Thomas Hobbes famously referred to life during wartime as “solitary, poore, nasty, brutish, and short”; the century was a time of almost continual violent conflict but more people died from disease than from musket, canon, pike or sword. The first three chapters are dedicated to the Natural, Soldierly and Criminal Deaths; it is the first that seems particularly resonant now, the 17th century battles with pandemics seem much more apposite than their struggles over parliament and king, the plague seems more relevant to us than their politics. No one had to decree lockdowns 400 years ago, if anyone became ill with the sudden onset of fever, headache, and chills, and the unwelcome appearance of a painful bubo or two, their relatives, friends and neighbours immediately disappeared into their houses and bolted their front doors. When Lady Grace Mildmay contemplated the dead body of her husband her words would have brought a nod of assent from her contemporaries; “let me behold my corpse which lieth folden in searclothes, leaded and coffined here before me yet unburied and consider; he was as I am, and as he is, I shall be. His candle is put out, his fire is quenched and he hath made his bed in the dark.” 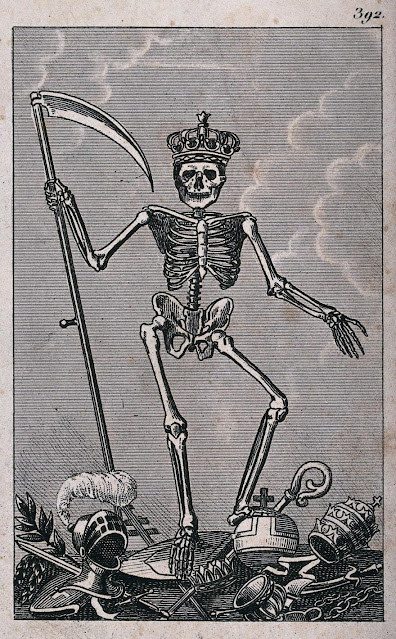 The author makes excellent use of his sources throughout the book though on occasion he has a tendency to quote at length and then unnecessarily paraphrase the quotation, as though he entertains doubts about his readers ability to understand 17th century English. His chapters on the deathbed and on ‘corpses, coffins and carriages’ are the most entertainingly morbid. He reminds us of the day Pepys hears about his Uncle Roberts death whilst he is still in bed “so I rose sorry in some respect, glad in my expectations in another respect” and after buying a pair of boots in St Martins takes himself straight off to Brampton eager to hear what is in his uncle’s will. He arrives at the family home to find “my uncle’s corps in a coffin standing upon joynt-stools in the chimney in the hall; but it begun to smell, and so I caused it to be set forth in the yard all night.” Or the case of Jane Thompson;

Getting a body into a coffin could be easier said than done in this period, especially if disease had left it in a bad way. Oliver Heywood remarked on the coffining of the drunkard Jane Thompson with unconcealed disgust in 1664. The stench alone was said to be intolerable. Frankincense was burned in the room where the corpse rested to alleviate the stink, doing very little, and the awful fumes had soon affected every room in the house. The women who were tending to Jane’s body feared that it would burst as they made the necessary preparations for her committal.  The coffin, a ‘huge great’ thing, was quickly brought in but her corpse was so enlarged from liver disease that the lid of the coffin would not close properly, forcing those present to bind it shut with cords. 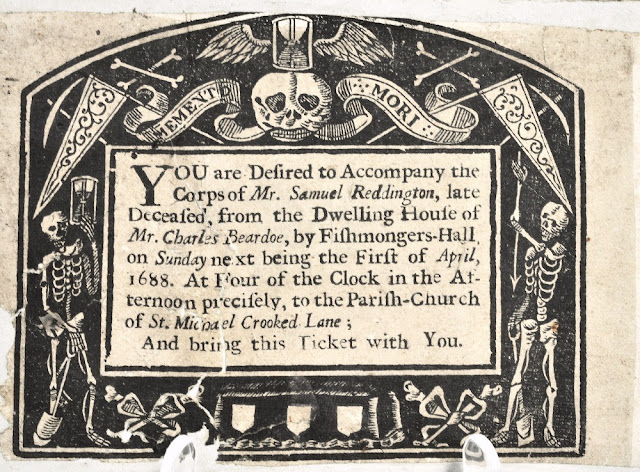 My one disappointment with this book was that I had hoped, perhaps unreasonably, that the author might be able to shed some light on the growth in popularity of headstones during the 1600’s but this is all we get;

It was in the latter years of this century that headstones first began to be erected in English churchyards in significant numbers, in part due to the burgeoning desire from humbler men and women to be remembered in stone as their aristocratic counterparts were in churches. Designs remained mostly basic and devoid of eccentricity, echoing the status of the individual buried in the grave below.

Headstones are now such an accepted part of funerary culture that it is hard to imagine a time then most graves were not marked; there doesn’t seem to any satisfactory explanation for their sudden appearance in churchyards in the late 1600’s and why they started to appear all over the country at around the same time. If I set this one cavil aside this is an excellent and useful introduction to the subject. Ben Norman is a first-time author and I suspect a relatively young one. I cannot imagine that he received much editorial assistance from his very prolific and busy publisher but he seems to have managed pretty well on his own; his book is well structured, fluently written and highly readable.