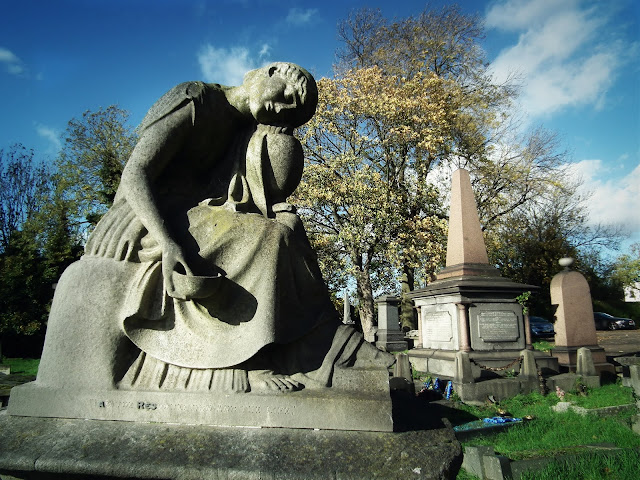 Sq. 16. Statuary marble figure of a seated woman mourning over an urn and holding a bowl, over the inscription 'I am the Resurrection and the Life'. Tall rectangular plinth with inscription in lead letters. Epitaph on south side commemorates Fanny Waugh, first wife of the Pre-Raphaelite painter William Holman Hunt, who died in Florence in 1866. Condition: poor, marble beginning to sugar, some lead letters missing.

Roger Bowdler “Kensal Green Cemetery; A Gazetteer of the Monuments.” (1998)

George Waugh was from a pious Scottish presbyterian background. He was one of the 10 children of Alexander Waugh the minister of the Scotch church in Wells Street (just off Oxford Street) and his wife Mary. He was baptised by his father at the church on 15 March 1801. Four of Alexander’s sons became ministers but George, after an education at Mill Hill school, started to train as a doctor at St Bartholomew’s hospital. He failed to complete his medical studies having fallen in love with his eldest brother’s sister-in-law, Mary Walker, and marrying her on 06 May 1829. Instead he became a very successful pharmacist with premises at 177 Regent Street where he became druggist to Queen Victoria. Mary had 11 children the first was born in July 1830 and barely survived a month dying on 07 August.  The unnamed son is commemorated as their ‘first born’ on their memorial in Kensal Green which says that his remains ‘here rest’ but if that is true he must have been buried elsewhere initially as the cemetery didn’t open until 1832. There are 3 more of the Waugh’s children buried in the family grave and recorded on the memorial, two girls who died in childhood, “Mary Walker their daughter who died 11 May 1839 aged 7 years and Isabella Foster their daughter who died 18 Feb 1853 aged 10 years,” and their son George “who was drowned while bathing in the sea at Slapton Devon on 24 Aug 1869 aged 34.” The details of George’s untimely demise are given in the Dublin Evening Mail of Friday 27 August 1869;

Drowning of a Barrister. A melancholy case of drowning occurred in the south of Devon on Tuesday evening. Mr. G. Waugh, a barrister, of London, was bathing in the sea at a spot between Dartmouth and Kingsbridge, in company with Messrs. Reynolds and Lucas, also barristers, when suddenly he exclaimed, "I'm drowning!" and he disappeared instantly. His companions, knowing was an excellent swimmer, thought he was joking when he uttered the exclamation. His body was picked up yesterday off the Start.

At the rear of the memorial is an inscription commemorating another of their daughters, Fanny, who predeceased them, dying two months after the birth of her first child in Florence in 1866 at the age of 33 and buried there in the Cimitero Degli Inglesi.  Fanny was the first wife of the pre-Raphaelite painter William Holman Hunt who married her following a failed engagement to his model Annie Miller. Holman Hunt started to paint Fanny’s portrait just before the birth of their son in October 1866 but the picture remained unfished at her death in December. He sculpted her tomb himself and had her buried beside Elizabeth Barrett Browning. It is said that Mary Walker blamed Holman Hunt for her daughter’s death but when he returned to England with his infant son he moved into his father-in-law’s house at 15 Queensborough Terrace, Bayswater. There he completed the portrait of his wife with the aid of his memory and a photograph and Fanny’s paisley shawl, purple dress, and cameo brooch brought back with him from Florence.  He also painted a portrait of his mother-in-law and rather stern and forbidding she looks. One imagines the family were not pleased to see the increasingly intimate relationship that developed between their grieving son-in-law and their youngest daughter Marian Edith. George Waugh was dead before Holman Hunt dared to take Marian and his son back to the continent with him and marry her at Neuchatel in Switzerland in 1875. British law defined marrying the sister of one’s deceased wife as incest and the marriage caused a serious rift in the family. Holman Hunt’s pre-Raphaelite colleague, the sculptor Thomas Woolner, had once also been in love with Fanny Waugh. His feelings were, however, not reciprocated and when he proposed to Fanny she declined, marrying Holman Hunt the following year.  Woolner wooed another of George Waugh’s daughters, Alice Gertrude, and married her instead in 1864. When Holman Hunt married Marian, Woolner was one of his most vocal critics and never spoke to his brother-in-law again. Woolner and Alice had six children, four daughters (the eldest later wrote a biography of her father) and two sons.

As the for the rest of George’s children, the ones that weren’t dying prematurely or marrying pre-Raphaelites (or both in Fanny’s case), Margaret married a doctor and moved to Australia where she died in 1910, Emily married Thomas Key a solicitor and moved to Leatherhead where she died in 1911 and Alexander became a country doctor who bullied his wife and children and became known in the family as "the Brute". His eldest son Arthur was the father of Evelyn Waugh the novelist. 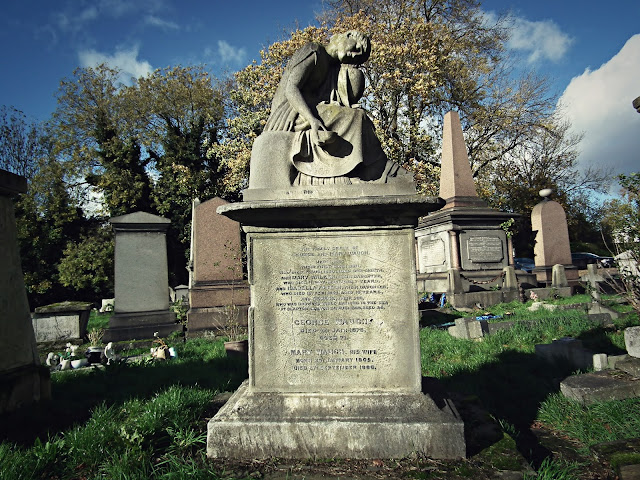