A Journal of the Plague Year; Cemitério da Ajuda, Lisbon 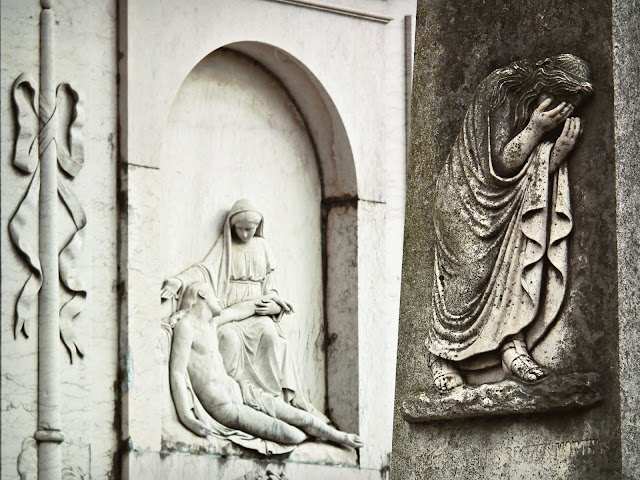 I took these photographs just over a year ago, on Friday the 13th December 2019, on a grey, overcast and drizzly day in Lisbon. Like most Lisbon cemeteries Ajuda occupies high ground in a very hilly city, with spectacular views down to the river Tejo but it can be horribly windswept and bleak in winter. I was in Lisbon dealing with some bureaucratic chores related to our forthcoming exit from the EU. It the week of the general election in England and the Portuguese were nearly as interested in the outcome as the British. Everywhere I went I was asked incredulously “Boris vai ganhar?” It was rather embarrassing to have to admit that “acho que sim,” yes Boris was likely to win. The election was on Thursday the twelfth so by the time I visited Ajuda I was already aware that it had been a complete rout for Labour and that my fellow countrymen had made it crystal clear that there were no second thoughts, the only thing that mattered to them was getting out of Europe. That day the question I was being asked was; “E agora?” What now? I didn’t know; Boris was already full of his bullshit about oven ready deals but it was hard not to believe that the only ones who were going to get stuffed was us. Brexit seemed like the biggest disaster that had befallen the country for decades. Little did we know that across the world in far flung Cathay some unfortunate citizens of the People’s Republic, in a then little-known city of 11 million people called Wuhan, were developing a high temperature and experiencing respiratory difficulties after being infected with a bat virus. It wasn’t until 3 January that the BBC first reported that the “Chinese authorities have launched an investigation into a mysterious viral pneumonia which has infected dozens of people in the central city of Wuhan…” 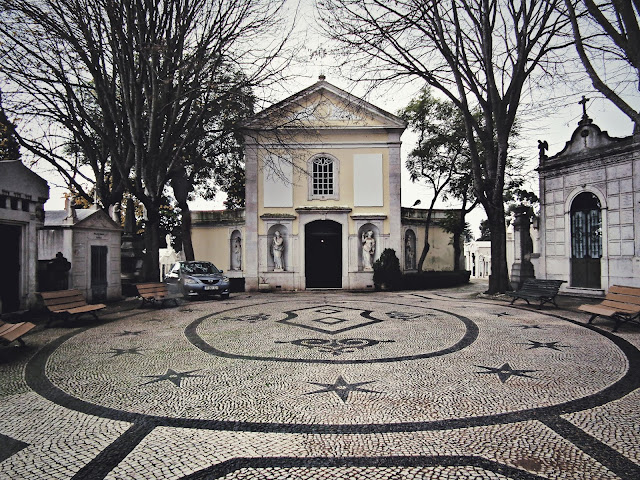 It is at times like this that any notions of being in control of our own destinies are shown up for the delusions that they are. Our minor local difficulties with exiting the EU have faded into insignificance with our species inability to control an organism so simple in construction that it barely counts as being alive. Luckily it isn’t as virulent or as lethal as organisms responsible for previous pandemics have been but it is still a reminder that the black death may have happened several centuries ago but we are just as vulnerable as we ever were to death and disease and life is only marginally less precarious than it was back in the 1340’s. Official estimates say that 1.7 million have died so far of the disease that none of us even knew about a year ago. Many people think that Boris Johnson’s government has proved to be singularly inept in handling the crisis. We would all like to think that it could have been handled better but the reaction across the world has been pretty much identical – trying to enforce social distancing, closing down places where humans congregate, wear face coverings, wash your hands, cross your heart and hope you don’t die. The only way to control the disease is to stay away from each other and as a social species that is very, very difficult. 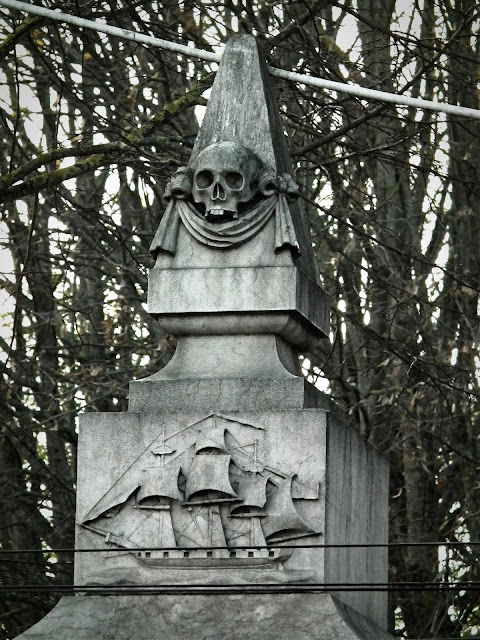 All our plans are in disarray; I would normally visit Portugal at least twice, often three times, a year. A trip planned for April had to be called off as did a family wedding scheduled to take place in July and then a final attempt to visit in October fell victim to the second national lockdown. I’ll try again next year.

Ajuda cemetery is one of Lisbon’s oldest burial grounds, founded initially in 1766 by Queen Maria II for the poor of the parishes of Ajuda and Belem on the western outskirts of Lisbon. What had been an area of small holdings, manor houses, quarries and windmills acquired status after the earthquake destroyed the Royal Palace, the Paço da Ribeira in central Lisbon. The Royal family moved to a country house, the Real Barracca, high on the hillside of Ajuda which served as the primary royal residence until it was destroyed in a fire in 1794. The current Palace of Ajuda was later built on the same site. The cemetery was built by a royal official, Diogo Inácio de Pina Manique, between 1766 and 1787 and it became the final resting place of many royal servants. 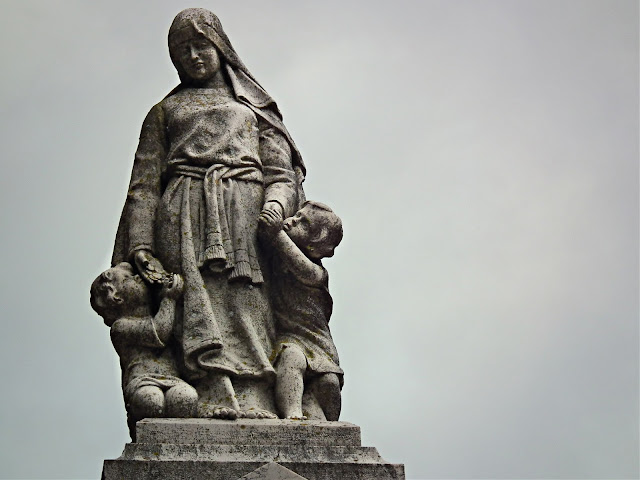 The entrance gate to the cemetery sports a pair of imposing finials with a sailing ship under full canvas and topped by a pyramid bearing a jawless skull above a swag of funeral drapery. Inside the entrance are four sculptures arranged in niches representing Truth and Strength flanking the gate on the right and Justice and Hope on the left. The cemetery chapels stands opposite the entrance and has four further niches with statues representing Prayer and Faith, Humility and Charity. The architect of the imposing entrance portico of Cemiterio de Prazeres, Domingos Parente, is buried at Ajuda along with Admiral Gago Coutinho, who made the first aerial crossing of the South Atlantic from Lisbon to Rio de Janeiro with co-pilot Sacadura Cabral in 1922. 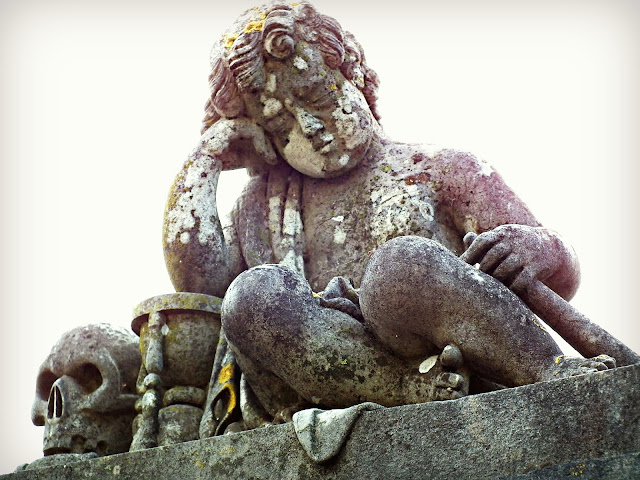 A common Portuguese tombstone motif is the putto with skull, hourglass and extinguished torch. 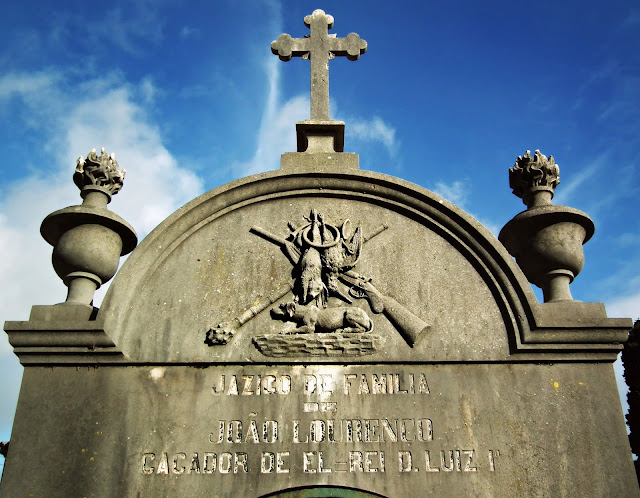 The sun did come out briefly whilst I was visiting Ajuda, hence the blue sky on this picture of the mausoleum of João Lourenço and family, hunter to Dom Luís I, King of Portugal from 1861 to 1889. 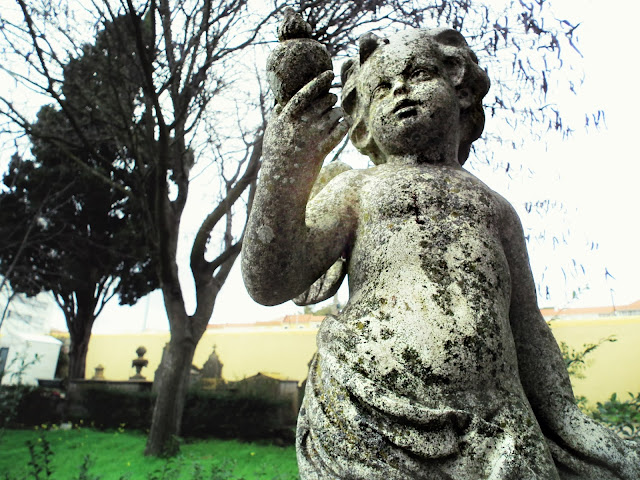 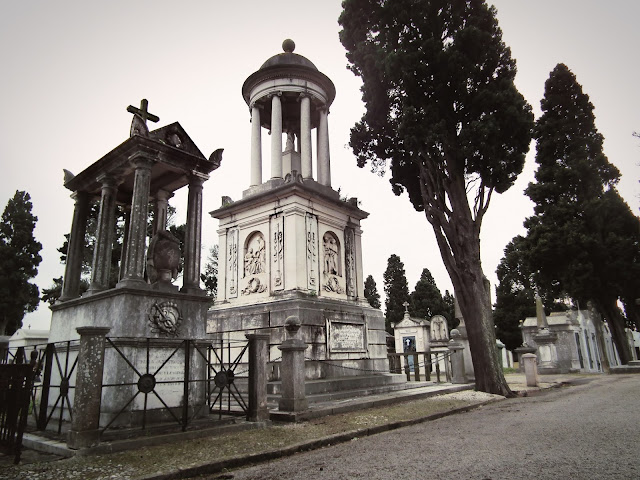