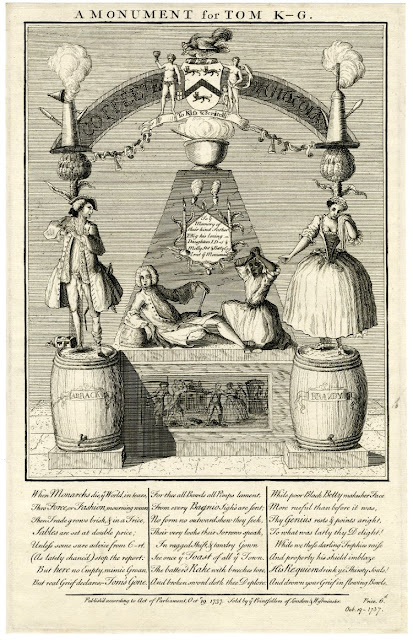 The parish register of births, marriages and deaths of St Paul’s in Covent Garden records the burial of one ‘Thomas King, from Hampstead’ on the 11th of October 1737. The newspapers recorded his passing in a short notice of just a couple of sentences;
With admirable alacrity an anonymous satirical design for his monument was on sale at sixpence in the print shops of St Martins Lane and Long Acre little more than a week after his funeral. The proposed memorial featured a statue of Tom dressed in an unbuttoned frock coat, reclining on an upturned punch bowl, his left arm propped up on the punch ladle. At his feet with arms upraised kneels the grieving figure of Black Betty, one of the coffee shops better known serving wenches. On the base of the memorial a panel shows a typical night scene in Covent Garden; in front of St Paul’s church two men fence, one with a sword and one with a staff, a woman tries to hold back the swordsman and in the back ground the night watch approach at a trot, presumably to arrest the two brawlers. Prints of this sort are always crammed with telling details. Figures of a drunken rake and a weeping whore stand either side of the main memorial. Behind it a stone pyramid carries the epitaph  "To ye Memory of their kind father T:K[in]g his loving Daughters D[ougla]s & Molly St[uar]t & Betty C[areless] Erect ye Monument", garlanded with lighted candles, smoking pipes and tobacco leaves. A banner at the top of the memorial reads ’coffee, tea and chocolate’ and a coat of arms shows Bacchus and a naked Venus and Cupid holding a shield with three cats surmounted by a cock mating with a hen bearing the motto ‘To Kiss & Scratch’. The print contained three columns of verse dedicated to the passing of the coffee shop proprietor and includes the lines:

….real grief declares, Tom’s Gone
For thee all bawds, all pimps lament
From every Bagnio sighs are sent
No form no outward show they seek
Their very looks their sorrows speak 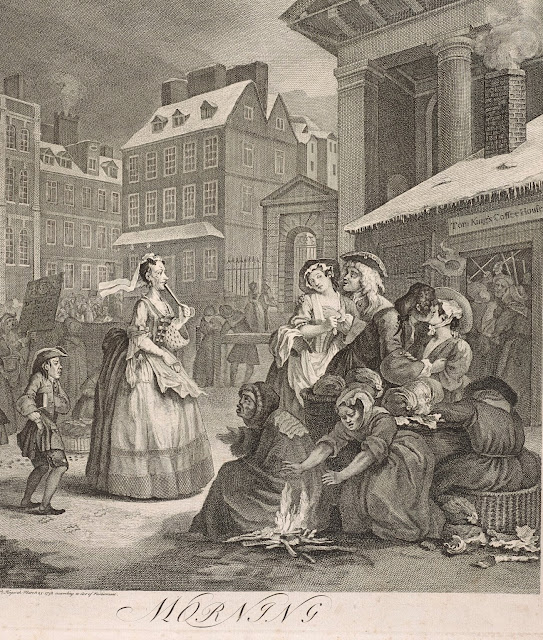 In his 1866 survey of the ‘Club Life of London’ John Timbs notes that King’s was “one of the old night-houses of Covent Garden Market: ‘it was a rude shed immediately beneath the portico of St. Paul's Church, and was one "well known to all gentlemen to whom beds are unknown." Fielding in one of his Prologues says: "What rake is ignorant of King's Coffee-house?"’… It is in the background of Hogarth's print of Morning, where the prim maiden lady, walking to church, is soured with seeing two fuddled beaux from King's Coffee-house caressing two frail women. At the door there is a drunken row, in which swords and cudgels are the weapons. Tom ran his coffee house with his wife, the infamous Moll whose anonymous biography, a 25-page pamphlet called the “Life and Character of Moll King”, is the main source of information on the couple. In The First Bohemians Vic Gattrell says:

In its time, the Kings’ was the best known of all the dives in Covent Garden, a pick-up place though not technically a brothel.  The only bed available was Tom and Moll's own bed in the loft, and when they went to sleep they pulled up the ladder. Couples who met there went to bagnios to conclude their business. Yet it was the Kings' enterprise that by the 1740s helped shift the location of upmarket sexual commerce from Drury Lane to the Piazza.”

According to the Life Tom King went to school at Eton and being expelled for some serious but unnamed misdemeanour became a waiter in a Covent Garden bawdy-house where he met Moll. She was the daughter of a St Giles’ cobbler whose mother peddled fruit and vegetables in the market. Moll started her working life as a barrow girl for her mother who had “several sweethearts before she was 14 years old.” Her inevitable seduction by a young gentleman led to sharing her favours with other young blades and eventually to a stint as a street walker in the company of the famous Sally Salisbury. When she met Tom in the 1720’s the couple contracted a Fleet Street Marriage (without benefit of clergy) and set up their market shed to sell coffee, tea and chocolate. The bill of fare at the Kings was less important than its role as a nocturnal assignation place for rakes and whores. It also attracted artistic clients including Hogarth;

According to J.T. Smith, a ‘large and spirited drawing in red chalk by Captain Laroon exhibiting the inside of Moll King’s’ hung in Horace Walpole’s house at Strawberry Hill (now lost), Smith also reported that he had been told by Benjamin West, Reynolds’s successor as the Academy’s president, who had it in turn from Hogarth’s friend Francis Hayman, that one night while Hogarth and Hayman were drinking at the King’, Hogarth noticed ‘two ladies whose dispute bespake a warm contest’ – women of he town, of course, “and, at last, one of them, who had taken a mouthful of wine or gin, squirted it in the other’s fae, which so delighted the artist, that he exclaimed “Frank, mind the b----‘s mouth!”’, Hogarth at once sketched the disagreement in his notebook and in 1735 resurrected it as an element in the Rake’s orgy in the Rose tavern.  (Gattrell p103.)

Following Tom’s death in 1737 Moll successfully ran a series of bawdy houses despite the continual attentions of the authorities to her business and her person. When she retired she married a Mr Hoff and built three houses at Haverstock Hill. She died in 1747. 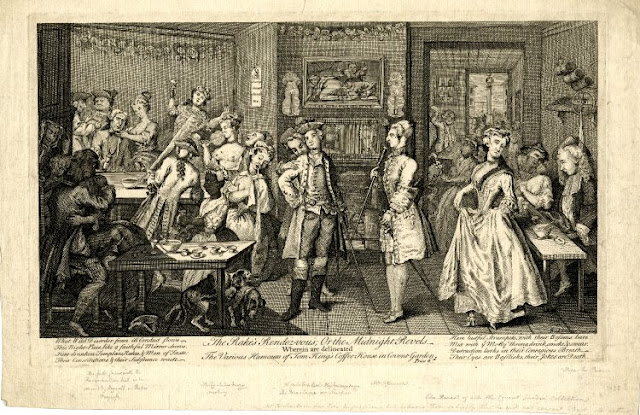