A place of worship for the 'very destitute and degraded' people of Barkingside; Holy Trinity churchyard, Mossford Green 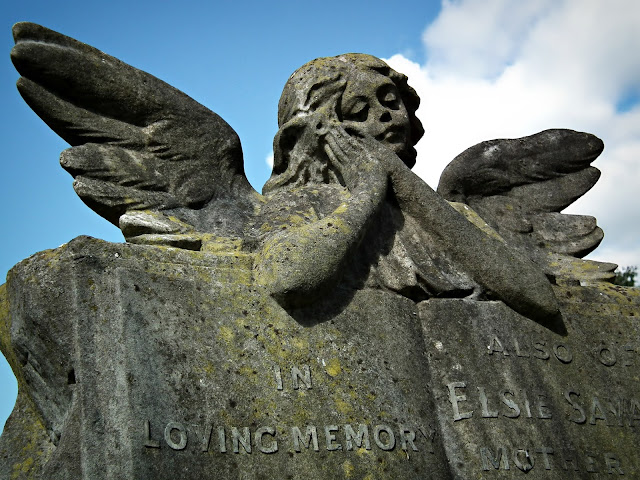 The first burial in the churchyard in the present register took place in 1840. By an unfortunate oversight, the earlier burials seem to have been mostly in the part of the churchyard near the road, and thus, as the pariah increases, the finer and more ornamental tombs have had to be placed at the back of the church. Could the position have been reversed, and the finest tombs placed near the road, the appearance of the church from the Vicarage and from the road would have been more pleasing, for some of these tombs are among the prettiest works of art in the parish, which is not perhaps saying much for the aesthetic taste of local builders. The parish church was built at a bad period -1840- and its style is a somewhat corrupt kind of Norman. There is a striking difference between this building and the real Norman - take for instance St. Bartholomew the Great at Smithfield.  After all it has a simple effect, and after London smoke, visitors from town admire its cleanly cream colour and simple decoration, Perhaps, as the Twentieth Century advances. and the true principle, of "art as the hand maid of religion," become more fully realised, it will be made more worthy of its position. Internally, also, it lacks architectural beauty.

Holy Trinity, Barkingside is the sort of building Pevsner inevitably had something disparaging to say about. If I could find my copy of the ‘Buildings of England – Essex’ I would tell you what it was but I seem to have mislaid it somewhere. The anonymous author of the 1903 Essex Guardian series ‘Where Ilford Goes on Sunday’ (to church of course, where else?) reckoned that the parish “has such an interesting history that the trouble is not how a find sufficient material, but how to confine the facts at our disposal into the limited space one article. Barkingside Parish Church, or Holy Trinity, Barkingside, to give it its full title, is a fine old edifice, standing in the middle of the parish. It was built nearly sixty years ago, and has a seating accommodation for about four hundred people. The outer walls of the edifice are almost hidden from view by the mass of ivy which has clung around it.” The ivy has gone and the ‘fine old edifice’ of 60 years is now 180 and has had a couple of facelifts. One added a chancel in 1898 and the vestries were added sometime last century. The churchyard was the only burial ground in the parish until 1923 when a new cemetery was opened next door to serve the growing community. I came here looking for the grave of the rather intriguing Reverend Wladislav Somerville Lach-Szyrma who was vicar of Holy Trinity from 1890 until his death in 1915 but despite the small size of the churchyard and the large size of his grave stone I was completely unable to locate it. I required a second visit and the help of the current vicar to finally track it down – but that is a story for another day. 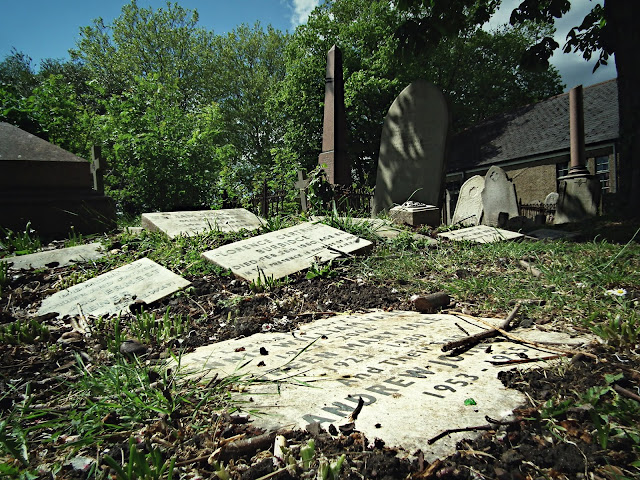 Thanks to the residents of Ilford who had written to the church commissioners in 1838, requesting that a new church be built for the ‘very destitute and degraded’ people of Barkingside, Edward Blore’s yellow brick ‘corrupt kind of Norman’ church was built in 1839-40 replacing an earlier church or chapel that was marked on maps as Mosfoot Parish Church. The oldest headstone in the churchyard carries the date 1790. Barkingside was a very rural parish, quite outside the ambit of the capital, for most of the 19th century; in 1876 James Thorne said the village was “merely a gathering of a few small houses along a crossroad, and a few others by a scrubby green; the inhabitants are chiefly engaged in agriculture.” He only noticed its existence because 3 years earlier Dr Barnado had been given the lease of Mossford Lodge as a wedding present and had opened his first home for girls there. The growth of the Barnado’s estate of children’s homes seems to have acted as a catalyst for more general growth in the area. In 1903 Barkingside Station, which is now on the Central Line, was opened by the Great Eastern railway. Memorials to the dead children of Barnado’s and to victims of railway accidents are both features of the churchyard.

BARKINGSIDE. The Church and Unbaptized Children — Some unpleasantness was caused in Barkingside a few days since by the refusal of the Vicar (Rev. N. Perkins) to bury the unbaptised child of James Vince. The child was eleven months old. Through the intervention of friend of Vince’s, the Rev. W. Stepney, of Ilford, undertook to officiate, and he conducted a funeral service in the Methodist Free Church, and completed the service at the graveside. 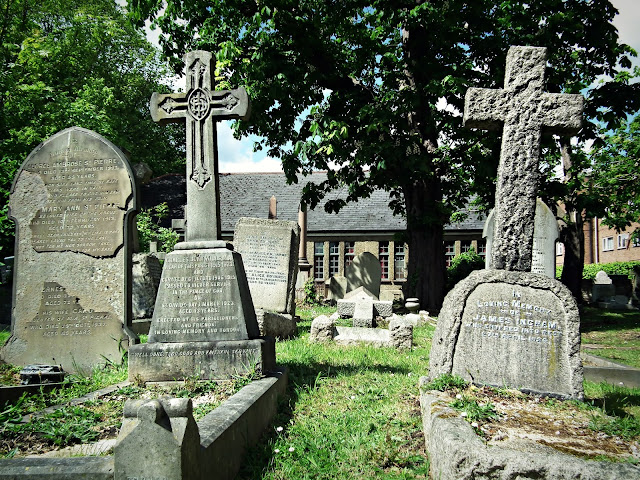 When the Reverend Perkins wasn’t refusing to bury unbaptised children his illiterate sexton was getting himself into trouble for burying still born babies without a proper death certificate after accepting a scribbled note on a scrap of paper from an unlicensed midwife as sufficient authority to carry out the interment:

A WARNING TO SEXTONS. - In consequence of some irregularities in the burial of a child at Barkingside, an inquest was held at the Maypole Inn, Barkingside, on Wednesday before Mr. C. C. Lewis, upon the body of a child named Cross, aged five days, son of Thomas Cross, a labourer. The father stated that his wife was delivered of twins on the 5th inst. (Monday), and was attended by Mrs. Staff (midwife). One of the children died on the following day, and the deceased died on Saturday. The body of the former was delivered to F. Linsell (the Sexton at Barkingside Churchyard) by the witness on Wednesday evening, and by him buried. Linsell asked witness for a certificate, and he gave him the piece of paper produced. This had written on it, "Baby died 5th August, 1889. Mrs. Staff." Julia Staff stated that the deceased was seized with a fit and died in a short time. Mr. W. J. Beer, surgeon, said the general appearances indicated death from convulsions. The Jury returned a verdict in accordance with the medical evidence. The Sexton (Linsell) attended before the Coroner, and expressed his regret for what had taken place respecting the burial of the first child, saying he was new to the duties, but he would take care that such a thing did not occur again. He quite understood that it was a stillborn child, and, being unable to read, he did not know what the purport of the paper handed to him was. The Coroner pointed out to Linsell the requirements of the Act in regard to the burial of stillborn children. 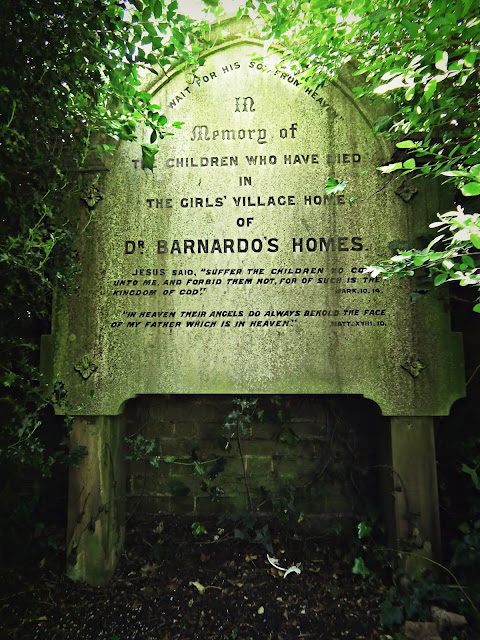 There is a newer memorial in Barkingside Cemetery next door which at least carries the names of all of the deceased children:

In the Parish Churchyard, Barkingside, a monument was unveiled to the memory of 320 children of Dr. Barnardo's Village Homes interred there. 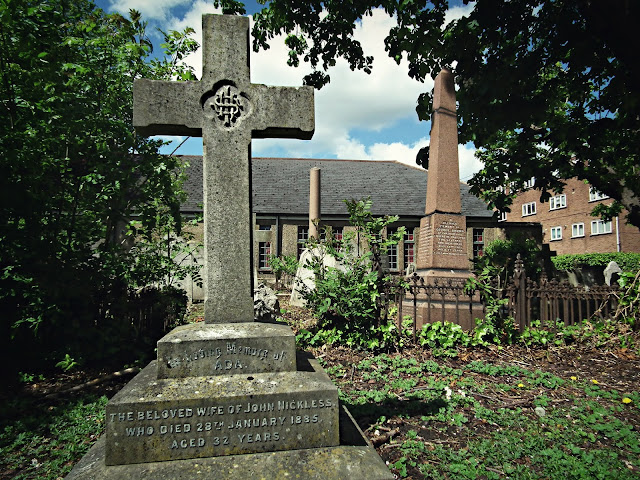 ILFORD MAN MUTILATED BY A TRAIN AT WEELEY. A fatal accident occurred to Mr. Thomas Fountain, of Barkingside, llford, at Weeley, on the Tendring Hundred branch of the Great Eastern Railway, on Monday evening. The unfortunate gentleman, who, with his partner, Mr. R. Roberts, of Barkingside, was constantly travelling on the line at this period of the year to purchase root crops, was hurriedly making his way to the station in order to catch the last train which was due. The deceased attempted to walk over the level crossing, in spite of his companion's dissuasions, to reach the up platform, although had he gone on the footbridge it would have been more expeditious. Mr. Roberts, who was some little distance behind, did not see what occurred, and thought his partner was safely on the train. Being unable find him, he called to Mr Rowan, the station master, who, on looking behind the train, saw the body of Mr. Fountain in a terribly mutilated condition, it having been carried a distance of several yards. The body was removed to the outhouse of the Railway Tavern, and about £10 were found in the pockets of the clothing. Mr. Fountain leaves a widow and family, he was about 55 years age. The inquest was held the Railway Hotel, Weeley, on Wednesday, by Mr. J. Harrison, coroner. Mr John Fountain, of White's Farm, Ilford, identified the deceased as his brother. He was dealer and farmer, and was a little near sighted, but was not deaf. Samuel Crowe driver of the train, stated that he did not feel the engine strike anything, and was not aware of the accident until he was informed at, St. Botolph's station. Police-Constable Skipper produced the property found on the deceased, which included £6 in gold coins. The jury returned a verdict of  Accidental death, but added a recommendation that the bridge should be moved to the other end of the station. The Foreman said that not one person in twenty went over the bridge. He himself had only used it once.  A Juror is said to have seen children crawl underneath goods trains. The Coroner said would forward the recommendation to the proper quarter.

On Saturday afternoon Mr. Thomas Fountain, of Barkingside, who was accidentally killed on the railway at Weeley, was buried in the parish churchyard, Barkingside. There was a large attendance of the inhabitants; and the ceremony was conducted by the Rev. W. S. Lach-Szyrma (vicar), who gave appropriate address.