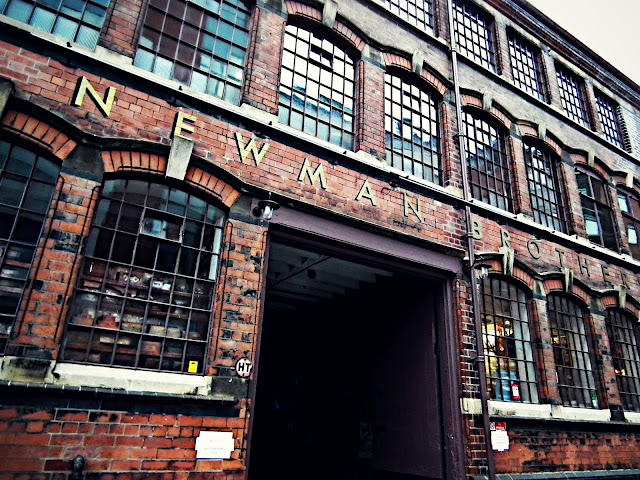 Is there a more entertaining way to spend a cold, dull, and wet day at the fag end of the year than in taking yourself off to Birmingham and visiting a coffin furniture factory and a graveyard? Probably, but I still enjoyed myself visiting the Coffin Works Museum and Warstone Lane Cemetery.
The Newman Brothers, Alfred and Edwin, opened a brass founding business making cabinet furniture (i.e. any visible metal parts for cabinets such as handles or fancy hinges ) at Nova Scotia Street in Birmingham in 1882. In 1894 they moved to new factory premises at 13-15 Fleet Street and began specialising in the production of coffin furniture for the profitable funerary industry. As well as coffin handles, name plates, and crucifixes they diversified into the production of funeral shrouds and coffin linings as well as eventually becoming a clearing house for other undertaking essentials such as embalming fluid or chin supports so that their clients could obtain everything they needed for a decent funeral under one roof. According to Julian Litten, author of The English Way of Death and founder member of the Friends of Kensal Green, Newman Brothers were “the most important manufacturer of such items at a time when England was regarded as the template for funerary pomp and extravagance.” By the 1950’s Newman’s were exporting extensively to the commonwealth as well as supplying the domestic market and employed over 100 staff. The company provided one off items for high end funerals as well as mass producing. They provided the coffin furniture for the funeral of Joseph Chamberlain when his family declined the offer of a state burial in Westminster Abbey and instead opted for a relatively modest interment in his home town (at Key Hill Cemetery, Hockley, just a stone’s throw away from the factory). Newman Brother’s coffin furniture also featured at the two biggest British funerals of the last 50 years, Winston Churchill’s in 1965 and Diana, Princess of Wales in 1997.  But times and tastes had changed dramatically in the 1970’s and the once thriving coffin furniture industry gradually fell on hard times.  Despite being commissioned to work on accoutrements to Lady Diana’s funeral in 1997 the factory closed for good the following year.


Rather than sell off the factory site for redevelopment Newman’s last owner, Joyce Green (more of her later), was very keen to see it turned into a museum. Rumour has it that she turned down at least one offer of £1,000,000 for the site. In 2000 the factory building was listed by English Heritage as Grade II* and in 2002 it was bought by the West Midlands Regional Development Agency with the intention of turning it into a museum. In 2003 it was featured on the first series of Restoration but failed to win enough votes to make the final or secure funds for refurbishment. It took another ten years for the scheme to be fully realised and the Coffin Works museum opened its doors to the public in 2014. The museum’s website says that in 1998, after a hundred years of operation “workers lay down their equipment, and walked out of the building for the very last time, leaving everything, including personal belongings behind…..The shelves and workbenches at Newman Brothers are full of original stock and tools of the trade. With the original machinery working again, you can truly experience how this old Jewellery Quarter firm once operated on a day-to-day basis, producing some of the world’s finest coffin furniture.” 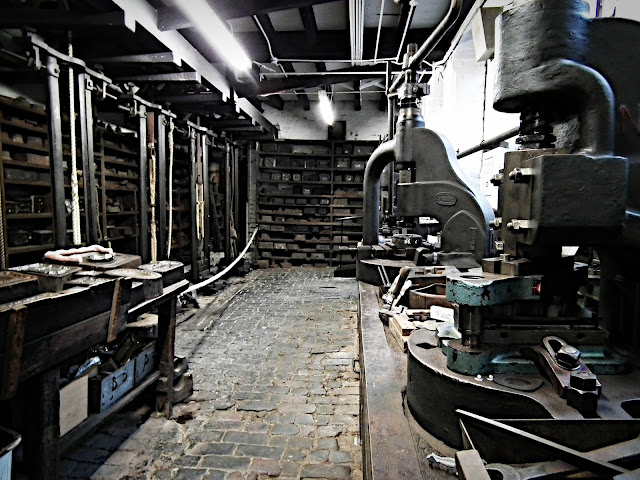 Admission to the museum is by guided tour only and entrance costs £6.00 for an adult. Our guide was Cornelius and he was informative and helpful and willing to wait while the pests in the group (myself included) held up proceedings to take photographs.  The factory has been restored to what it would have been like in the late 1960’s, early 1970’s. This is about the era that British manufacturing stopped investing in new plant and machinery and so it quite possible that nothing much had changed inside the factory when it closed in 1997. The stamp room, the first place you are shown on the tour, looks like it hasn’t changed much since the 1860’s. Workers stamped out coffin plates, handle plates, crucifixes and coffin decorations from sheets of metal using heavy hammer presses. Weight, gravity and human muscle were the main sources of power for the operations taking part in the stamp room rather than anything flashily technological, such as electricity for example.   Cornelius demonstrated the use of a press and brought half a ton of iron down on a tiny piece of tin plate and a metal die to produce an RIP motif. A noose of thick cord keeps the hammer press from falling under its own weight – Cornelius stood in front of us with the noose in his hand and deadpan told us that we were free to take to take whatever pictures we wanted in the museum, except of him holding the noose. He may have been joking and I may have missed a good photo opportunity.
﻿ 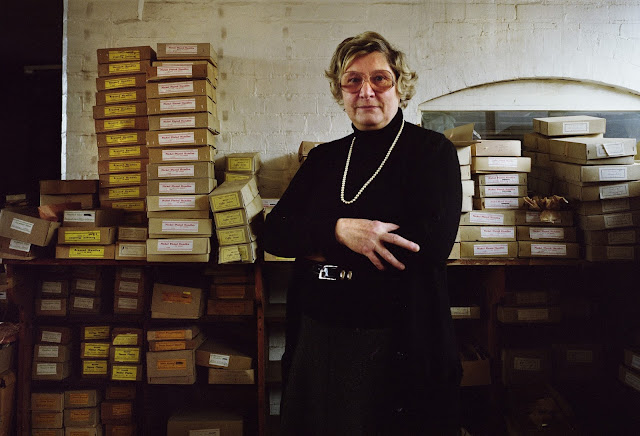 The factory office is even more of a time warp. It looks like the workers spontaneously evaporated sometime in late 1969, Marie Celeste fashion, leaving their desks scattered with random purchase orders, invoices, catalogues, and correspondence, their jackets still on the coat stand, unopened bottles of Worthington E, half drunk bottles of Gordon’s Orange Gin and whisky and a tin of Will’s Castella panatelas in the Director’s drink cupboard and cans of Campbell’s cream of mushroom soup and chicken risotto on a shelf above the secretaries desk. It was to this office, Cornelius, explained that the young Joyce Green came to work in 1947 after being wooed away from a competing firm across the road. From a relatively humble start as office secretary Joyce rose to become company secretary, somehow persuading the reluctant owners to part with a couple of shares in the company along the way in lieu of a pay increase. Quietly behind the scenes Joyce gradually managed to acquire more shares and increase her influence in the company. The process was so secretive that by the time she gained full control of the company in the late 1980’s it was something of a shock to her colleagues and employees. Some of the men resigned in protest at having a female boss (in 1989? This is what Cornelius said, and who am I to doubt it?), sabotaging their machines before they left and fully expecting to be taken back after a few weeks when Joyce realised she couldn’t manage without them. Joyce’s response was to automate their jobs. It is hard not to want more details of this story but we just seem to have the bare bones of Joyce’s remarkable career. 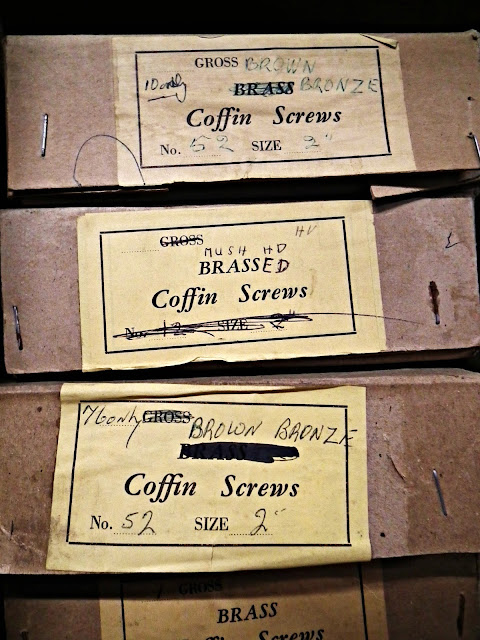 In Newman’s sewing room a team of women workers produced shrouds, coffin liners and other fabric funeral goods. Cornelius had another good story about the machinist in the early 1960’s who helped herself to shroud offcuts and other bits of waste material, took them home and made them into her wedding dress. There was even a photo of her, with her husband, on her wedding day, looking slightly nervous as she was worried that colleagues or managers might recognise the remarkable similarities between the fabric of  her bridal gown and the shrouds she made during the day. If they did they were too polite to say anything. 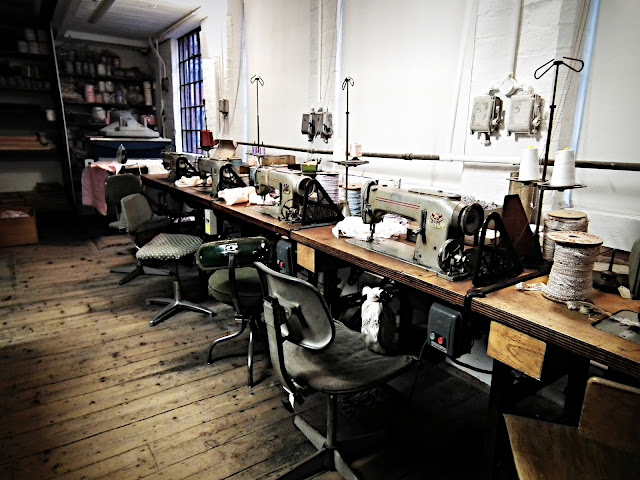 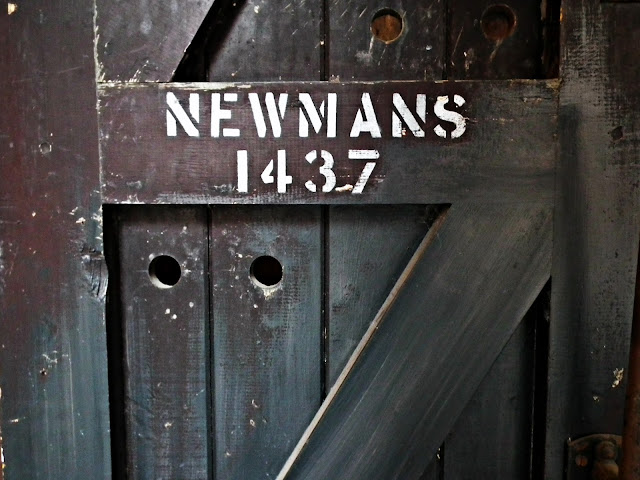 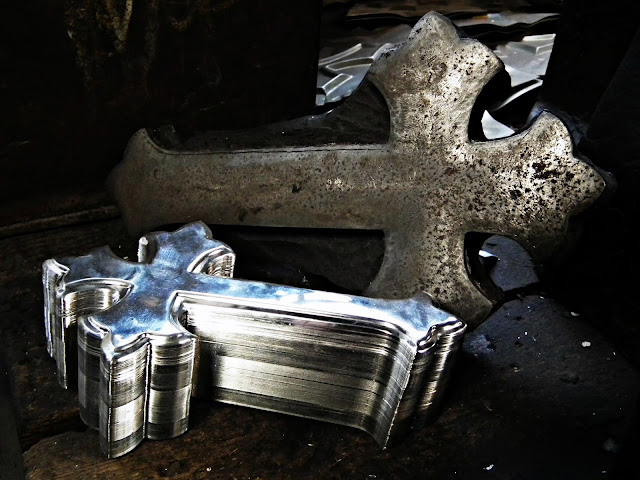 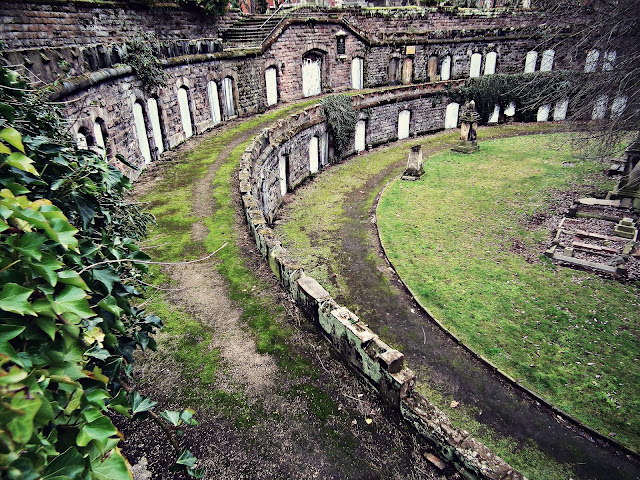 Warstone Lane is one of two cemeteries in Hockley, the other being nonconformist Key Hill cemetery, less than half a mile on the other side of the railway line. As is often the case the non conformists opened their cemetery first, Key Hill opened for business in 1836, whereas the Church of England Cemetery Company only opened Warstone Lane in 1847 on the site of a disused sand quarry. Birmingham Council compulsorily bought the site in 1952 and it was closed for burials in 1982. There is a handsome lodge still standing on Warstone Lane but the cemetery chapel was demolished in 1954. The chapel was once the dominant feature of the cemetery, standing at its highest point but the centrepiece now is the impressive terraced sandstone catacomb. The Birmingham cemeteries act of 1846 required coffins stored in the catacombs to be sealed with lead or pitch to prevent ‘harmful effluvium’ emanating from them. The cemetery is small compared to London cemeteries (and with few interesting memorials or monuments) but even so over 93,0000 burials or interments have taken place here.