Drive your cart and plow over the bones of the dead; the display of human remains in museums 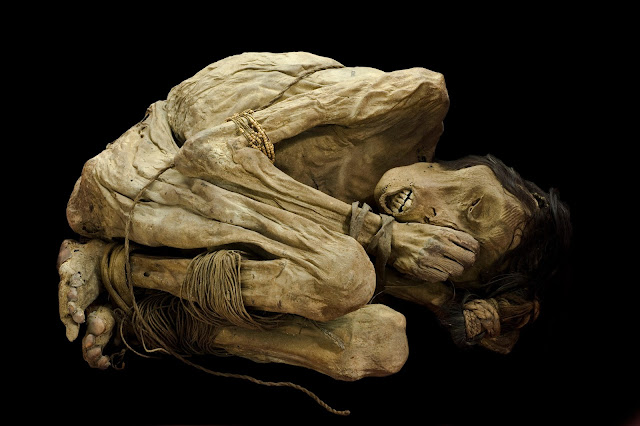 With my new found in South American mummies I decided to revisit the remains of ‘Guimaral’ at the Wellcome Collection, which, very handily, is just a brisk 20-minute walk from my office along the traffic fumes of Euston Road.  I have seen him before, and he is very memorable, but nevertheless I was keen to get reacquainted. It was a Thursday evening and the Wellcome was quiet; despite the proximity to my workplace I haven’t been back there since the ending of Covid restrictions. On the ground floor everything seemed pretty much as it was back pre-pandemic except that the Blackwells book store behind the café has disappeared and the security staff seem to have lost any interest in checking bags. But on the second floor there have been some unexpected changes; ‘Guimaral’ had once reigned as the undisputed draw of Medicine Man, the Wellcome’s tribute to its founder Henry Soloman Wellcome but at the place he had lived since the gallery opened in 2007 all I found was an empty display case. A notice informed me that the “naturally preserved or ‘mummified’ body of a young man who died approximately 600-800 years ago” had been removed from being exhibited as a result of “changing ethical standards around displaying human remains and in light of work reviewing whose perspectives receive prominence in our collections.” The notice made clear that until now the Wellcome regards itself as having “prioritising the gaze of science and museum visitors over the burial intentions of the culture of origin.” Even worse the mummy had been obtained in the 1920’s at “a time when human remains were often acquired for anthropological study, including to support the development of racist scientific theories about supposed racial hierarchies.” Having voiced concerns about the burial intentions of the culture to which the mummy belonged the Wellcome then has to admit that it does not actually know what his cultural origins are; “we will research this man’s geographical and cultural origins,” they say “in order to inform appropriate future care.” Until the museum can establish this the mummy will presumably remain in storage, an object too controversial to be seen by the general public.

How very different things were back in 2007 when the Wellcome Collection opened in its new building. James Watson (of DNA fame) presided over the opening ceremony and the Guardian reported on 17 June that “Britain's newest national museum - dedicated to medicine and its impact on life - will open its doors this week to reveal some of the strangest artefacts connected with human anatomy: a blade from a French guillotine, a robot used in the sequencing of the human genome, an Andy Warhol painting of the heart, a Chinese torture chair and a 14th-century Peruvian mummy.” Clearly the desiccated Peruvian (if that is what he is) was a major element of the Wellcome’s modern take on the Wunderkammer and one that was no different from anything else in its list of oddities, a guillotine, a robot, a painting, a chair and a dead Latin American.  Shortly after the opening the Naked Scientists Blog (01 July 2007) visited Medicine Man and spoke to staff about public reaction to the collection. Visitor Services Assistant Brittany Hudak told them that “I think that so far people have tended to gravitate towards the Peruvian Mummy, or even people coming in the door have asked ‘where's the mummy?’  Which goes to show that the fascination of the mummified body is apparently still alive and well.” Ken Arnold, the Head of Public Programmes for the Wellcome added “This is a mummified male figure in a sort of foetal position with its very delicate skin draped over the skeleton.  It's between five and seven hundred years old.  One of the things that I'm sure intrigued Wellcome is that fact that actually this is completely naturally preserved.  It's simply wrapped in textiles and then dried.  It shows that the people who did this had a strong understanding of how to preserve biological material.  Also, of course, what we're able to do now is apply modern scientific techniques to study objects like this.” In fifteen years the Peruvian mummy has effortlessly changed status from star attraction to bone of contention along with the Shuar tsantsa, often called a shrunken head, which lived in the display case opposite. Both have been removed from display until the Wellcome decides what to do with them.

It was in 2000 that Tony Blair and Australian premier John Howard, issued a joint statement pledging to increase repatriation of Indigenous Australian human remains back to their communities, saying that “the governments recognise the special connection that indigenous people have with ancestral remains, particularly where there are living descendants.” At the time, under English law, national museums were banned from permanently giving up anything in their collections, a position which effectively nullified the joint statement. In 2004 the Labour Government passed the Human Tissue Act, prompted by a scandal at Liverpool’s Alder Hey Children’s Hospital where medical staff had stored body parts from dead children without their parent’s permission. The Act contained a clause allowing nine, named national museums the power to transfer human remains less than 1,000 years old out of their collections “if it appears to them to be appropriate to do so for any reason”. Since then, the nine named institutions have received many requests for the repatriation of human remains from Governments and communities around the world, and have had to wrestle with the ethical issues raised by the acquisition and storage of the dead. In a UCL blog written in 2017 Julia R Deathridge ponders the question ‘should human remains be displayed in museums?’ “In the past human remains were regularly collected from excavation sites and displayed in museum cases with little thought put into the person that they once were. However, feelings towards the use of human remains in the UK have begun to change in recent years.” She points to the 2005 Department for Culture, Media & Sport Guidance for the Care of Human Remains in Museums and says that since then “human remains have been given a unique status within collections and are no longer treated as objects.” It is a refrain you often hear in the argument – human remains are not the same as other objects, their status is completely different. But is that right? And what would the dead themselves have wanted? Would they want to be on display in a museum, would they have given their consent? Professor Geoffrey Scarre of Durham University thinks not; in a 2003 article on ‘Archaeology and Respect for the Dead’ in the Journal of Applied Philosophy he argues “it is fairly certain that an Egyptian pharaoh would not have wished to be translated from his tomb in the Valley of the Kings to a glass case in the British Museum… Ancient Egyptians took very seriously the issue of their welfare after death. For Egyptians of all ranks, one of the main tasks of this life was to make suitable preparations for the prosperity in the next…” I am sure that is all true but the real question for me is should we care what the dead want? Should the wishes of the dead take precedence over the wishes of the living?

In a response to Deathridge’s blog the artist Susan Elaine Jones wrote “I feel the importance of displays of human remains is invaluable. The last hundred years may be unique in human history in terms of not seeing human remains and engendering a culture of death denial. Historically, attending death beds, visiting church ossuaries and saintly relics and dissections for public education (not just behind closed doors of medical schools) all took their turns in human history of displaying the dead and helping the living come to terms with their mortality. It seems a peculiarly modern whim that the only way to show respect is to hide our dead. With death happening in hospitals rather than at home, and a culture of closed coffins, it isn’t surprising that the public have to turn to displays in museums, Body Worlds, and even death awareness events such as Dying for Life to be able to look their inevitable future of death in the face, and so make the most of their lives. For all these reasons, I would argue strongly that most displays of human remains are both essential and respectful.”

Whilst I agree with Jones’ view there is no getting away from the fact that the acquisition and display of human remains in museums was often (but by no means exclusively) underpinned by a world view that viewed non-European cultures as other and inferior. The issue of whether human remains should or should not be displayed in museums is therefore contaminated by questions of racism and exploitation. The two issues can be unravelled – Gunther Van Hagen’s Bodyworld exhibitions elicit their own share of controversy but the dead all consented to be on display. Personally I don’t see why human remains should not be on display but I have no religious or spiritual beliefs and I think only human arrogance makes a human corpse a special or privileged object. All flesh is grass. As Blake said; “drive your cart and plow over the bones of the dead.”