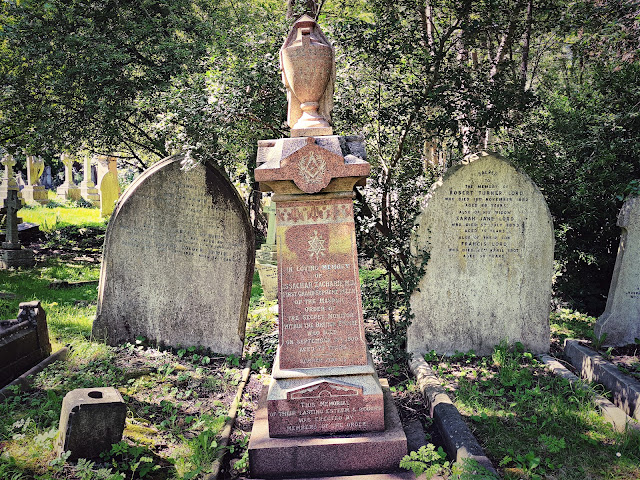 It isn’t the most spectacular of monuments but amongst the plain grey headstones the polished pink granite memorial with its masonic symbols does stand out and snag the attention long enough for you to read the inscription:

In Loving Memory Of Issachar Zacharie M.D. First Grand Supreme Ruler Of The Masonic Order Of The Secret Monitor Within The British Empire Who Died On September 18th 1900 Aged 73 Years – Sempre Fidelis.   This memorial Of Their Lasting Esteem & Regard Was Erected By The Members Of The Order

Issachar Zacharie was a bit of a con man and quite a successful one. For a start he was not entitled to use the appellation of MD, he was not a doctor and although in his later life newspapers often described him as an Orthopaedist, he was nothing more than a humble chiropodist, a cutter of corns and trimmer of toes according to the less polite American newspapers. His most famous client was Abraham Lincoln and the two men struck up something of a rapport. In early 1863 Lincoln told the Canadian Christian mystic and Zionist Henry Wentworth Monk that “…I myself have a regard for the Jews, My chiropodist is a Jew, and he has so many times “put me upon my feet” that I would have no objection to giving his countrymen a “leg up”…” The esteem in which Lincoln held Zacharie ruffled feathers in Washington; US newspapers were particularly scathing, as reported here by The Belfast News-Letter on 13 October 1864:

Then we have had a more sanguinary scandal in New York city. The other day one Doctor Issachar Zacharie, a corn cutter in Broadway, quarrelled with his partner and brother chiropodist, Mr. Samuel Barnett. Barnett drew a revolver, and shot Zacharie through the jaw. The wounded man is out of danger; the assailant is out on bail; and the affair will be probably arranged, and never heard of in a criminal court; but the opportunity was too rich a one to be neglected by the World. It found out that Doctor Issachar Zacharie was the confidential friend and bosom companion of his Excellency Abraham Lincoln; that he was the ami de la maison at the White House, and that by means of his influence over the President he had carried on a regular trade in pardons and releases, notably in the enlargement of one Mr. Mordecai, who was sitting for his sins, not, as he should have done, in the gate, but in the inner hold of a military prison. "Many a time," thundered the World, "has the President of the United States left a Cabinet Council to indulge in an hour's sweet converse in the parlour with this contemptible toe-nail trimmer." It seems beyond a doubt that this Dr. Issachar Zacharie was at one period a person of some note at the Republican Court, for he was appointed by special edict ‘Chiropodist-in-chief to the army,’ and was permitted to strut about in an absurd military uniform! You will pardon this note of exclamation, for this is certainly the first time that I, or probably anybody else, heard of an army in the field having bunions. What a treasure Dr. Issachar Zacharie would have been to the rebels in their corn-cutting expedition in the Shenandoah last July.

Zacharie was born in Chatham in 1846, the son of Jewish immigrants from Prussia. By the age of 10 his father had apprenticed him to a physician but a few later, in the mid 1840’s the whole family upped sticks and moved on again, this time to the United States.  By 1846 he was treating toes and pulling teeth in Baltimore but was soon setting on professional tours to other major cities across the US. He gulled his clients with fraudulent endorsements from more famous medical men including one from Sir Astley Paston Cooper which claimed that Zacharie had studied chiropody under him and that the famous surgeon considered “him to be fully competent to perform the duty of a Chiropodist upon all who may favor him with their patronage”. Sir Astley had supposedly dated the endorsement 27 June 1837 which would made have made Zacharie astonishingly precocious as he would only have been 10 at the time.  In 1860 he published “Surgical and Practical Observations on the Diseases of the Human Foot”, the composition of which gave him little trouble as he simply plagiarised the entire tome from an identically titled book by John Eisenberg (and from whom he had also filched the idea of fake celebrity endorsements). When the American Civil War broke out Zacharie wrote to the US Secretary of War suggesting the creation of an elite corp of chiropodists would help keep the Unionist Army on its feet. Stanton rejected the idea but as he needed his own corns cutting summoned Zacharie to the war office. He was so pleased with the results of the consultation that he introduced Zacharie to a fellow martyr to bunions, the President. The rest, as they say, is history. Zacharie somehow charmed his way into Lincoln’s good books and into a position of power and influence way beyond that merited by even the most expert use of nippers and clippers, files, probes and rasps. He was sent on sensitive diplomatic and spying missions deep in Confederate territory in New Orleans and Virginia. He backed Zacharie to be the Chiropodist General to the US Army even though the army had neither before nor since felt the need  for this particular role within its ranks. In 1865 Zacharies stellar American career came to an end when John Wilkes Booth shot Lincoln in the head at the Ford’s Theater.

By the early 1870’s Zacharie had apparently forgotten that the post of Chiropodist General to the US Army did not exist and billed Congress $45,000 for his services in the non-existent role in which he claimed to have treated 15,000 soldiers. The claim was rejected and he returned to England in umbrage in 1874. He took premises at 80 Brook Street near Grosvenor Square and placed adverts in the major newspapers claiming to be a foot surgeon and late chiropodist general to the United States Army and inviting anyone suffering from corns, bunions, enlarged joints and nails penetrating the flesh to come and be cured. He also set up The Secret Monitor, a branch of the Free Masons, through which he again appears to have achieved some measure of power and influence, according to the Daily Telegraph & Courier of 22 June 1899:

Although the title of the Order of the Secret Monitor sounds very cabalistic and recondite, it nevertheless simply means a modem off-shoot of Freemasonry. It only dates back to 1887, but already it has several well-known members the craft, and its present Grand Supreme Ruler is ! the Earl of Warwick. It hold its annual convocation of Grand Council last evening in the Hotel Cecil, at which his lordship presided, and at this particular meeting the custom elect, instal, and proclaim the Grand Supreme Ruler for the year, the rand Treasurer, and appoint and invest the now Grand Officers. The result of this convoca- tion, far regards officers, was that the Earl of Warwick again became Supreme Ruler, and that next in rank him was Dr. Issachar Zacharie. Judge Philbrick, Q.C., the Earl of Halsbury, Dr. Muglistoa, Mr. C. E. Keyser (High Sheriff of Berks), Deputy-Inspector General Dr. Belgrave Ninnis, Mr. Frederick West, Judge James Copley Moyle, Mr. George Richards (Transvaal), and many others received Grand Office.” Benevolence, the groat principle of Freemasonry, is not forgotten in this degree, and mot ion was on the business paper to support the Secret Monitor Benevolent Fund Festival in the autumn, at which the presence of ladies is to be invited.

Lloyd's Weekly Newspaper of 03 October 1880 describes a domestic incident which must have taken Zacharie right back to the days of the Civil War:

SLAPPING THE FOOTMAN. At the Marlborough- street police-court, on Friday, Catherine Keats, cook, was brought before Mr. Mansfield on a warrant charged with assaulting Henry Smith, a lad of colour, footman, both in the service of Dr, Issachar Zacharie, orthopedist, 80, Brook-street, Hanover- square. Complainant stated that as he was going to lock the area gate, it being his master's orders that it should be fastened at night, the prisoner said she was the mistress of the house, and would not have it locked. On complainant telling her that he would not acknowledge her as the mistress, she struck him several times, and took up a knife and said she would rip him up. The housemaid got between them, and the matter ended. One of the blows the prisoner gave him caused his ear to bleed, and he had been a little deaf ever since. Some further evidence having been given by the housemaid, the prisoner said the footman accused her of being drunk, and she slapped him, but did not use a knife. Mr. Mansfield fined the prisoner 20s.