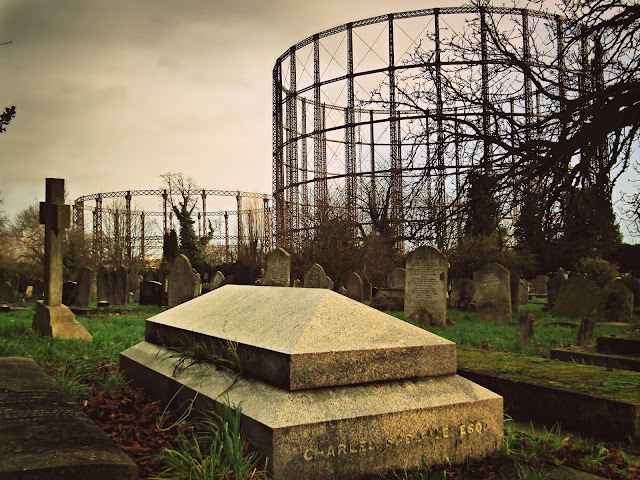 "Why so quiet
Vitruvius Wyatt?"
"Because I'm dead,"
he said.

The iconic gas holders that overlooked Kensal Green cemetery from the other side of the Grand Union canal were demolished last year. I was looking through old photos of the cemetery to see if I had any unused ones and came across the two you see here, both taken on Christmas Eve, one in 2018 and one in 2019.  Gas holders no 5 and 6 have been part of the scenery of the cemetery for over 130 years (see Guy Vaes photos from the 1960’s here) and it is sad to see them gone to make way for new apartments (which will have a good view of the cemetery, though this is generally not acknowledged to be a selling point for some reason).  Gas holder No 5, the more diminutive of the pair was built in 1877-79 to the design of Vitruvius Wyatt the constructing engineer of the Gaslight and Coke Company. Vitruvius (to christen him with the name of the Roman architect and engineer, his father must have had his life and career plotted out for him before he was even born) is responsible for other famous gas holders at Bromley-by-bow and Beckton, all of them under threat of demolition. He chose not to be interred in Kensal Green when died in 1897 and so was spared the unpleasantness of watching his work dismantled and taken away as scrap iron. Instead, he was buried in Hampstead Cemetery where Wynn Wheldon no doubt spotted his grave and was inspired to write the short poem above, quite possibly knowing nothing more about his subject than his name. Gas holder No 6, the bigger of the two, was built in 1890-92 and designed by George Careless Trewby who was Engineer-in-Chief at the company and Vitruvius’ boss. He was also buried at Hampstead Cemetery. 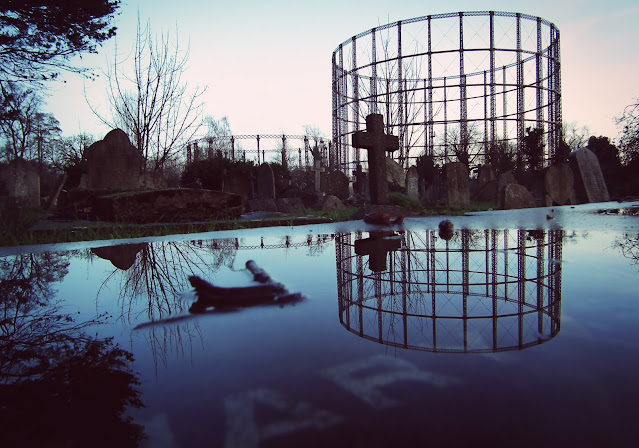 The Kensal Green gas works were established in 1845 by the Western Gaslight Company who used bituminous coal brought by the canal produce cannel gas on the site. This was used to power gas lighting for affluent householders in St Pancras, Marylebone, Bloomsbury, Hampstead, Paddington and Chelsea. Cannel gas was more expensive to produce than coal gas but it produced a better flame. The news that the still semi-rural site was to be used for a gas works did not go down well with local ratepayers and businesses. The General Cemetery Company was as alarmed as anyone one else with a financial stake in the neighbourhood by ‘the alleged nuisance and serious injury to health and property’ and the impact a gas works could have on the cemetery. Interested parties met at the William the Fourth Tavern on Harrow Road on Thursday 08 October 1846 “to come to such resolutions as might be deemed expedient for averting the threatened evil.” The meeting was chaired by the vicar of St. Johns, the Rev. A. G. Pemberton, who commenced proceedings “by reading letters which he had received from the Rev. Warden of All Souls College, who was a landed proprietor in the neighbourhood, from the Kensal green Cemetery Company, and Mr. Jacobs and other gentlemen” who all vigorously opposed the opening of the new gas works. It all did no good, not even taking the matter to law, the gas works opened in 1847 and only closed in 1975. 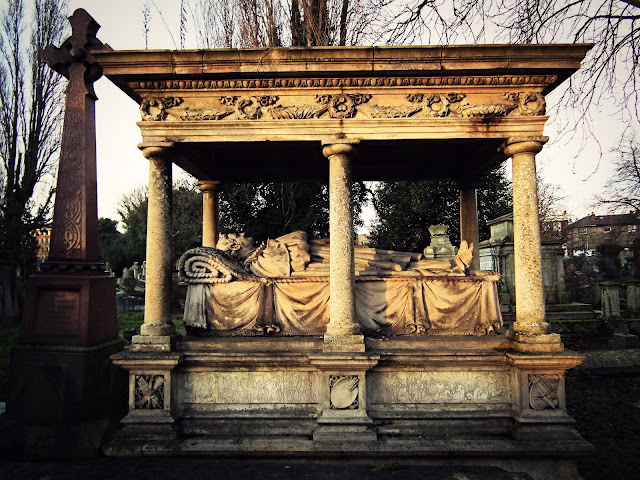 The tomb in the foreground of the top photograph belongs to Charles Babbage (1791-1871), mathematician, philosopher and inventor of the difference engine, generally acknowledged as the first mechanical computer. Babbage’s pickled brain now resides, neatly bisected, one half in the Hunterian Museum of the Royal College of Surgeons in Lincoln’s Inn Fields and the other in the Science Museum in Exhibition Road. I have been meaning to write about him for some time, I really must get my finger out.

The photograph above (like all the others, taken on 24th December in 2018 or 2019, is the tomb of William Mulready, the Irish painter, illuminated by the rays of the setting sun.   Mulready’s "six-poster Lombard Renaissance" monument is made of artificial stone and was designed by Godfrey Sykes who was one of the artists responsible for the decoration of the Victoria and Albert Museum. The monument, which features prominently on the Central Avenue of Kensal Green Cemetery, was exhibited at the 1867 Paris Exposition Universelle, where it won a prize. Mulready reclines, in life size effigy, on plush upholstery protected from the elements by a canopy. The base of the monument has incised representations of some of Mulready’s better known paintings as well as palettes and paint brushes and other symbols of the life of an artist. 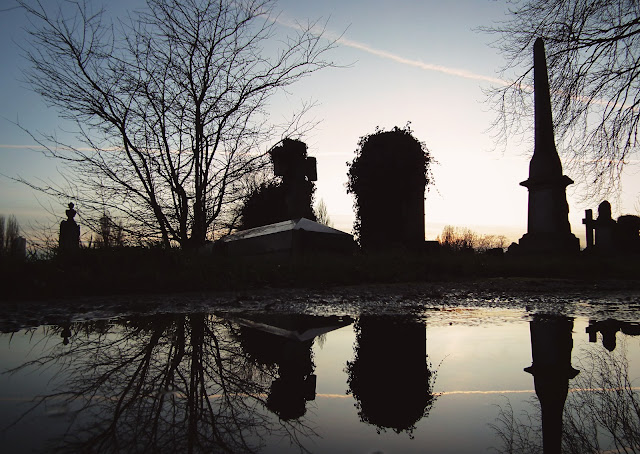 The last two pictures are sunset scenes in the cemetery, the one above from 2018 and the one below from 2019. 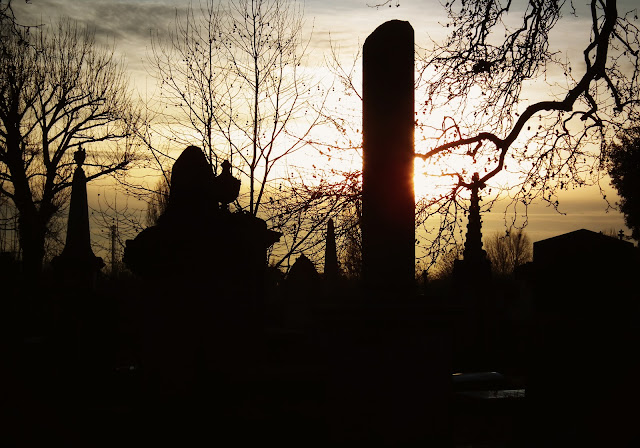