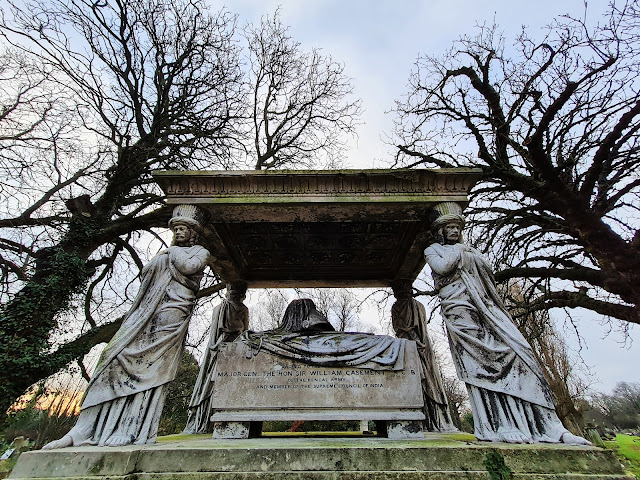 A couple of weeks ago I had a work meeting in Ilbert Street, W10. The appointment was at 10am and Ilbert Street is just around the corner from Kensal Green cemetery, a ten-minute walk at most. So I made sure that I arrived an hour early in West London and was waiting at the cemetery gates when they opened at 9am. It was a glorious morning when I first arrived, cold and crisp but with the sun shining. Within ten minutes it had clouded over and started to drizzle but the light was still good and I managed to get a few decent pictures as I strolled through the cemetery from the crematorium end to the main Harrow Road entrance. 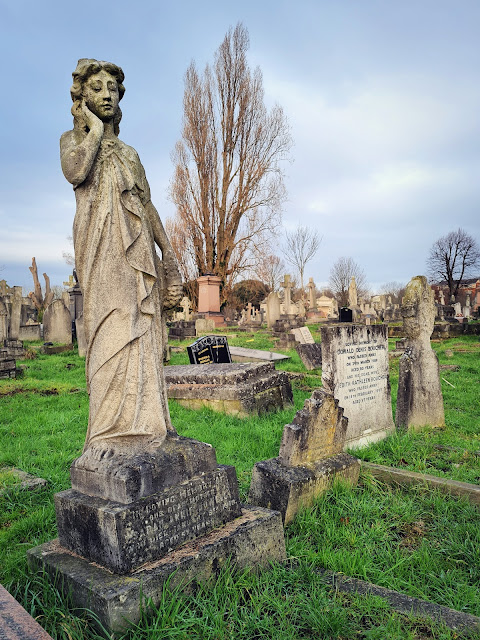 I’ve been reading Chapter 86, ‘London Burials’ in Volume 4 of Charles Knight’s 1841 magnum opus ‘London’. The chapter is the work of John Saunders, a now forgotten novelist and dramatist who was born in 1810 and died in 1895. His work, which was once admired by Bulwer Lytton, Leigh Hunt and Charles Dickens, is now long out of print and completely unread. As you would expect Saunders devotes a few pages to relating the horrors of burials in the city churchyards but then moves on to a description of the new cemeteries, the magnificent 7 all having opened in the previous decade. He devotes most space to an account of a visit to Kensal Green, just eight years after it had opened. The frontispiece to the chapter shows a view of the cemetery – in the foreground a widow and her children tend a grave while another young mother, bonneted and shawled leads two crinolined little girls across an open lawn. At the rear of the lawn is Central Avenue with the tombs of Andrew Ducrow and John St. John Long. With no trees taller than the biggest memorials the Anglican Chapel and the north colonnade are clearly visible in the distance, bookending the view. 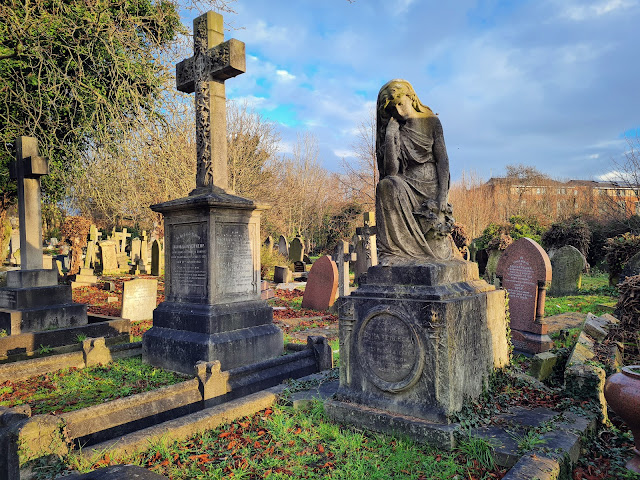 Saunders opens his account of the cemetery by saying that he arrived there following a pleasant three mile amble along the Harrow Road.  Even as late as 1841 London’s urban sprawl more or less stopped in the North-West at Paddington and a pedestrian strolling along the Harrow Road, once they were past the Lock Hospital and Paddington workhouse, had open fields to the north of them and the gracious villas of Westbourne Green on the south side of the road until they reached Kensal New Town. The railway and the canal to the south of Harrow Road had taken all the heavy traffic off the road and the walk to the cemetery would have been a pleasant rural ramble. Not now of course, the Harrow Road is the route of the A404 and you will choke on exhaust fumes and find yourself half deafened with traffic noise if you take this route; the canal is a much better option these days.

“After a pleasant walk of between two and three miles along the Harrow road, the handsome, substantial looking Doric gateway meets the eye on the left, standing a little back; we pass through and the grounds of Kensal Green Cemetery are before us, These are extensive, comprising about forty six acres and are surrounded with a lofty wall on either side of the gateway, now almost covered by a rich belt of young forest trees, evergreens and shrubs; whilst the opposite boundary is left partially open to the eye, so as to admit of fine prospects from different parts over the country round Shepherd's Bush, Hammersmith, Notting Hill and Bayswater.” When Saunders talks about the country he really did mean country; south of the cemetery was open fields until you reached Notting Hill or Shepherds Bush. He underestimated the size of the cemetery – originally the grounds occupied 55 acres of land, 39 reserved for Anglican burials and the rest for non-conformists. Spare ground to the west of the cemetery was later absorbed into the cemetery and developed into the crematorium and gardens of remembrance in the 1930’s; the total area of the cemetery is now around 72 acres. 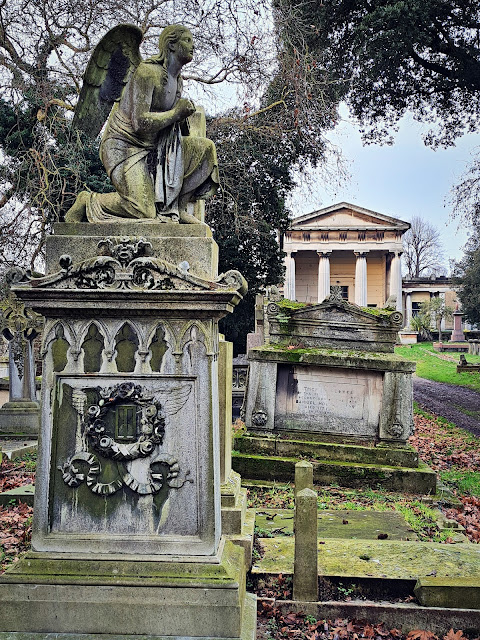 Saunders described what would have been a very different looking cemetery, a much neater and well-manicured one, not the half wild place we know and love today:

In the interior the grounds are divided by broad winding and straight walks, the rest being laid out in grassy lawns, relieved by parterres of flowers, clumps of trees and shrubs and, above all, by the glitteringly white monuments of every possible outline, style and size from the simple flat stone, up to places large enough for their owners to reside in whilst living. The chief buildings are the two chapels and the colonnade. The chapel for the Dissenters on the left in the unconsecrated ground, divided from the consecrated by a clearly marked boundary, is with the exception of its front, where the Doric pillars give something like dignity of expression, markedly plain; the chapel for the use of members of the Church of England on the right is, on the contrary, both noble and handsome and the interior with its solemn gloom and single painted glass window rich, though simple. 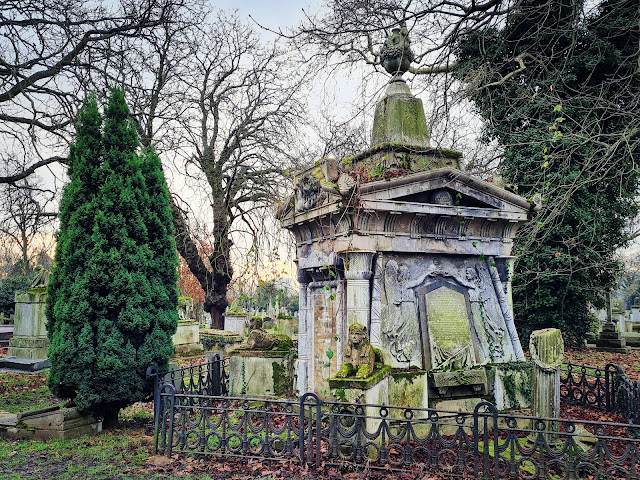 180 years it was the monuments of Andrew Ducrow and John St. John Long which grabbed the attention on Central Avenue, Mulready and Gibson had yet to appear;

The tombs of the greatest pretension at Kensal Green are mostly ranged at the sides of the central walk leading to and from the chapel. Here are Dr Valpy's in the form of a Roman temple, the Rashleigh family's, of Mendabilly, consisting merely of flat and head stones, but of such gigantic size and rude structure that one involuntarily thinks of primeval ages, and men like gods; whilst opposite each other at the junction of four principal walks, the most conspicuous objects in the most conspicuous part of the cemetery, stand St John Long's with a figure of the goddess of health raised on high within an open Grecian temple, and the prince of horsemen's Ducrow's, in the shape of a large Egyptian building, with bronze sphynxes each side of the door and surrounded by a garden with flowering evergreens, standard roses, and sweet smelling stocks with gravelled walks and bronze railings. 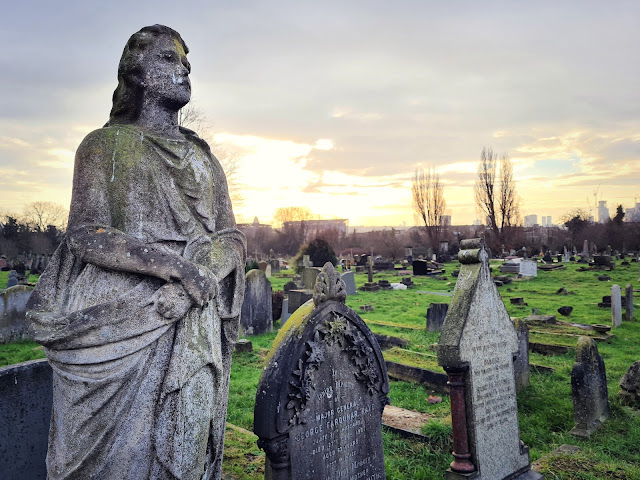 Saunders is impressed by how many burials have taken place at Kensal Green since it opened but 6000 doesn’t seem a lot in 8 years. The Directors of the General Cemetery Company would almost certainly have liked to see it a little busier!

Upwards of six thousand persons have been interred here since the opening; a circumstance that in itself shows how great was the want of such a place. Not one of its least advantages is that every private grave is secured from disturbance, forming indeed a freehold which may be bequeathed by its owner. The system of mapping out the ground is ingenious and satisfactory. The whole is divided into squares of 150 feet by 100, for each of which a leaf of a very large, massive looking, and iron bound volume is set apart; here every grave in the square is numbered and the occupied ones marked. This book, and printed plans of the squares, are always accessible to the parties concerned, so that mistakes and deceptions are alike guarded against. There are some points in which improvement may be made. When the cemetery companies obtained their respective acts of parliament, the dangers of burying near the surface, and of burying several bodies in the same grave, one above another, were not so well known as they have been since the publication of the Report of the Committee. Now however, it appears many of the best informed men consider there should be no grave within five feet of the surface, whilst at Kensal Green, and no doubt at the other cemeteries, they bury within four feet.