If you see a hearse go by; the City of London Cemetery and Crematorium, E12 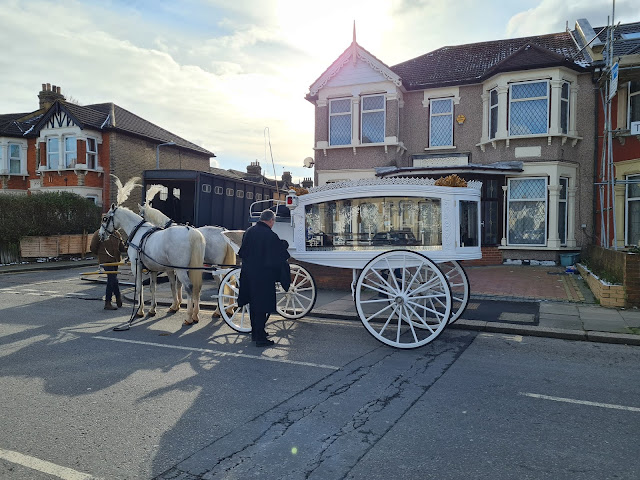 After 9 months of staying at home, interacting with anyone outside my household via a laptop screen, wearing a face-mask whenever I was likely to be close enough to another human being for them to breath on me and singing ‘happy birthday’ to myself on the 20 occasions a day I wash my hands, all my efforts were in vain as at Christmas SARS-CoV-2 caught up with me anyway and I finally succumbed to Covid 19. By the 10th February I hadn’t been out of the house for almost six weeks and was desperate to escape for a few hours. It had been snowing for a few days, not particularly heavily but enough to cover the ground with a thin layer.  Because there was a biting north-easterly wind the temperature felt sub-zero but the sun was out and close to the ground and away from the wind chill factor the temperature was above zero and the snow was beginning to thaw. I was keen to get some cemetery photos in the snow but as always I had left it a little too late. Still the bright winter sun was pleasant even if my fingers felt threatened by frostbite. 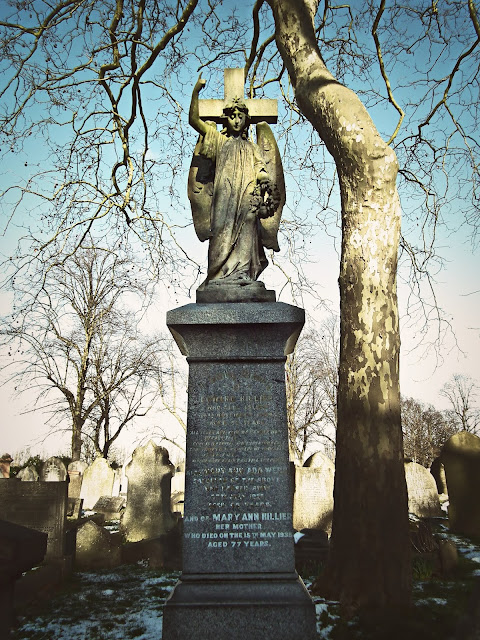 It is a 40-minute walk from my front door to the City of London cemetery in Aldersbrook Road. I was just a few streets away from home when I came across a horse drawn hearse being readied for a funeral.  It was pristine white, with gleaming etched glass windows, drawn by a pair of lightly dappled greys with white manes and tails and ostrich plumes on their heads. The carriage driver was busying himself checking everything was in order before the undertakers brought out the coffin. I used to work half a mile from the cemetery in Manor Park and horse drawn funerals were a reasonably common sight but I’ve never seen a white carriage before. If there is a horse drawn funeral in the east end the undertaker is likely to be T Cribb & Sons, carriage masters, whose head office is in Beckton. When I checked their website, it did look like this was one of theirs; “White horse-drawn hearses pulled by either black or grey horses are very rare; they are most popular with the younger generation or those with religious faiths” it said. The firm specialises in restored Victorian carriages – their pride and joy is the only original Shillibeer mourning coach still in use in the UK.  The white coach didn’t look Victorian and it certainly didn’t look restored. It looked suspiciously new in fact. A little investigation soon revealed that white horse-drawn hearses are not rare at all – undertakers all over the country now offer their clients the use of exactly the same model. A few more google searches and I find out that the “coffin carriage is designed and manufactured by DST Exports” whose official factory address is Dakala Road , Near Sheesh Mahal, Opposite Government Fish Ponds, Patiala 147001, Punjab, India. On their website they say that Royal Look White funeral carriages “are especially for our Foreigner clients to give a warm last goodbye to their loved ones. A horse-drawn hearse carriage can be a more traditional tribute to your loved one, adding a real sense of occasion to the funeral. This is White Western look funeral carriage. These carriages are totally handmade and very strong for long life.” Price only on application unfortunately so I don’t know how much they cost. 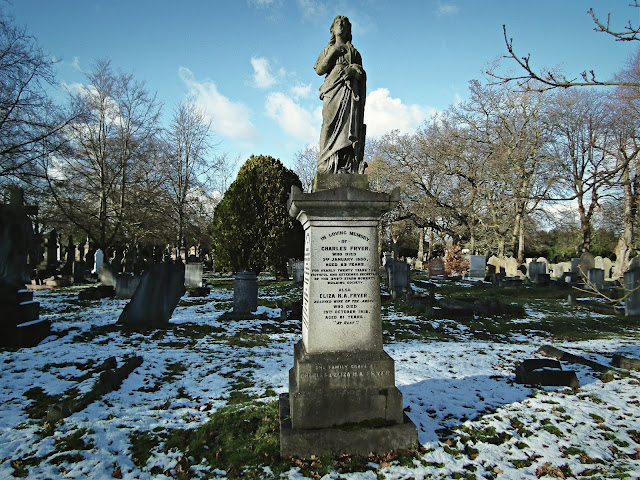 The City of London cemetery opened for business in June 1856 but was only consecrated in November 1857 because the Bishop of London was unwilling to conduct the ceremony until all of the 108 wrangling parishes in the City had reached agreement. The following month an anonymous correspondent of the London City Press went to visit the cemetery, publishing his account of the day out in the 2nd January edition of the paper;

We took advantage of one of the sunny December days to steal quietly into the Ilford Cemetery, and look, leisurely around upon the place where the majority of the City people will take their final rest. The slanting, and amber-tinted rays of the sun fell softly on the broad spaces of green turf, and the wrens, and thrushes, and robins, warbled among the branches, with no sound, save that of our own footsteps, to mar their melodies or disturb them in performance their requiems. Contrasted with the clean City pavements, that always seem to be warmed by the rapid and unceasing tread of hurrying feet, these green slopes and broad gravel walks, -untenanted by either the living or the dead, for, save ourselves and the birds, we saw not a single human being there, —contrasted most strangely, and we could not help reverting, in idea, to the future, when hundreds of stone memorials will dot the ground, and in place of the broad, unruffled carpet of turf, the ground will be heaved up into pillows, suggestive of the many who have sunk to rest there, while labour will find its daily task in the melancholy work of gravedigging. 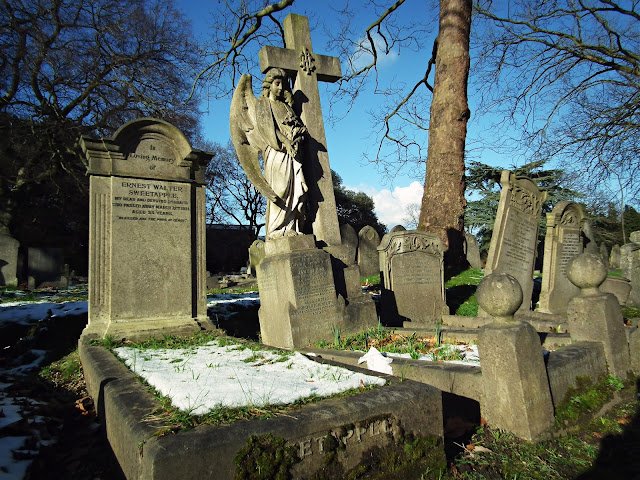 The man from the City of London Press would still be able to find his way around the cemetery, the general plan of the place hasn’t changed much in 163 years. Two crematoriums have been added, one in 1901 and a new, modern, more efficient, and, it has to be said, ugly cremation facility was added in the 1970’s. His estimate of ‘hundreds’ of stone memorials turns out to be a slight understatement and there are now more than 150,000 graves, most of them being some sort of stone marker. Almost all graves contain more than one body and it is estimated that they have around 600,000 occupants. As the cemetery was used extensively in the late 19th by the City parishes for the mass reburials of human remains from emptied crypts, cleared churchyards and demolished churches some authorities estimate that in total almost a million people have been buried here. And that total grows daily, particularly at the moment; it is a relatively busy cemetery at the best of times and it is not unusual to see funerals taking place. I spent a couple of hours there and was surprised to see separate funerals using both the Anglican and non-denominational chapels and both old and new crematoriums. I counted six funerals while I was inside and there was another cortege pulling up at the main gates as I was leaving. Only Covid could account for so many burials and cremations. I have no idea whether I was there on a particularly busy afternoon or whether the cemetery is like this every day as it goes about the business of quietly disposing of the victims of the pandemic in East London. 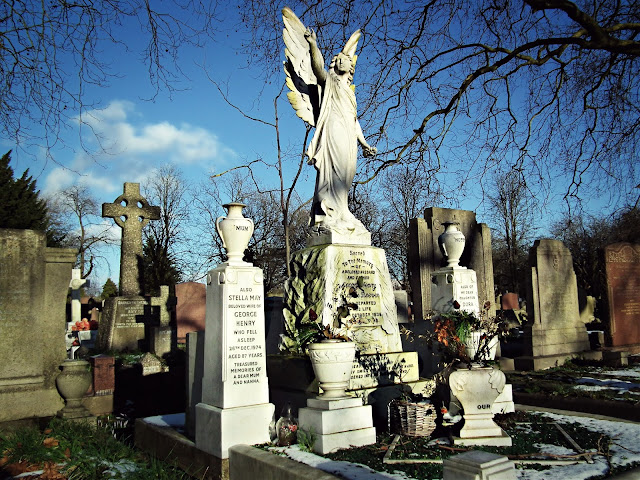 Away from the bustle of the city and the daily preoccupation with the getting and spending of money our anonymous correspondent from the London City Press found the in deserted cemetery found himself brooding on mortality. In the empty catacombs he encountered only one occupant, the ironically named Mrs Hasluck whose luck had apparently deserted her that year;

Walking down to the catacombs, we were startled out of our loneliness by the loud and mysterious reverberation of footsteps, which increased as we progressed, and which we presently discovered to be the result of the semi-circular form of the structure and its embankments, producing one of the most distinct and impressive echoes I ever remember to have heard, and fitting the mind for the strange lesson of life's fleetness which those numerous unoccupied compartments suggests. Who amongst the busy throng, now pushing aside the swinging doors of banking houses, now debating in Corporation or Vestry, now driving hard bargains in the market, and now squaring up the accounts of the past year, will be entombed within those narrow cells before 1858 shall close? There is but one name there yet—it is that of Mrs. Hasluck: it will not be so long. Death knows no rest; Time knows no pause; and the halest and the hopefullest among us, may, at this moment, have at least one foot placed on the threshold of eternity! God, in His mercy, hides the future from us, and every successive minute of our lives is veiled in impenetrable obscurity!

Memento mori are no longer in fashion but, if you see a hearse go by… 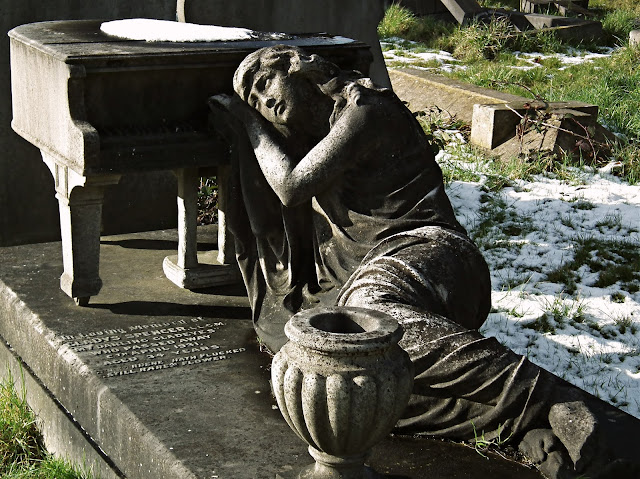