Peter Ross 'A Tomb With A View; The stories and glories of graveyards' (Headline £20) 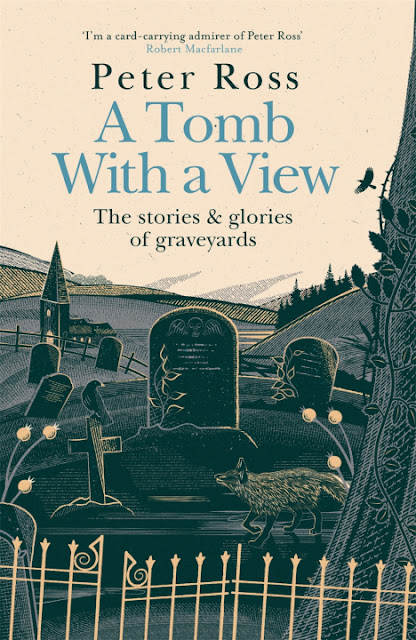 Graveyards themselves are essentially colons: they can introduce a narrative. Graveyards are opportunities for storytelling, for understanding who these people were and who we are.

Peter Ross in an interview for the Times

“I grew up in Graveyards. The dead were my babysitters, my quiet companions.”; Peter Ross opens his new book as though he is the protagonist of a novel by Neil Gaiman. In reality the award-winning Scottish journalist grew up in a house just like the rest of us though the house he lived in seems to have been a stone’s throw away from Stirling Old Town Cemetery where as a callow youth he went fishing for tadpoles or admiring the view across the city from an outcrop called Ladies’ Rock. To Ross graves were, and are “shelves full of stories”. Perhaps unsurprisingly the first living person in his new book is the ubiquitous Sheldon K. Goodman, who tells Ross “burial grounds are like libraries of the dead, indexes to lives long gone.”  I have a good deal of sympathy for that view; it is pretty much my own attitude towards cemeteries. For all our professions of lifelong fascination with cemeteries the truth is that 20 years ago graveyards were a bit of a niche interest and hardcore taphophiles were rare creatures indeed.  Cemetery books were published infrequently and cemeteries themselves were often lost and abandoned places. Graveyards have become fascinating in the age of the internet because on-line newspaper archives and genealogical sites make research of cemetery occupants much easier to do. And with their several million occupants UK burial grounds provide enough raw research material to keep bloggers and writers busy for at least another couple of hundred years. Is taphophilia the new trainspotting?

Ross’ book is a collection of journalistic short pieces on cemeteries in the UK and Ireland. He visits burial places in London, (Brompton for Sheldon’s Queerly Departed tour, Highgate, and Kensal Green), looks at Milltown cemetery in Belfast and its intimate connection with the troubles, visits the grave of Phoebe Hessel, the Stepney Amazon at St Nicholas in Brighton and Peter the Wild Boy in Hertfordshire, war graves on the Scottish Islands and attends a wedding at Arnos Grove cemetery in Bristol.  At Kensal Green he clears up a mystery that has puzzled me the last couple of years when he meets Mehdi Mehra, an Iranian businessman who built an extraordinary memorial to his eleven-year-old son Medi, who died in a riding accident. “Around his son’s grave,” Ross says, “he built a memorial on a scale the Victorians would recognise.” This is something of an understatement – the memorial is so huge it dwarfs everything else in the cemetery. It is so large it isn’t even immediately recognisable as a memorial. A 30-metre-long half circle of Corinthian columns built using 350 tonnes of granite, 150 tonnes of steel and 200 tons of concrete and decorated with angels holding torches, books and flowers, this is monument on a scale the Ancient Egyptians would recognise rather than the Victorians. At Glasnevin cemetery we hear the harrowing story of charismatic tour guide Shane Mac Thomáis who became an unexpected celebrity after appearing in a documentary about the cemetery One Million Dubliners. On March 19 2014 CCTV cameras captured Mac Thomáis entering the cemetery at 7.00 in the evening. Walking towards the main part of the cemetery he paused, turned around and saluted the camera. His body was found hanging from a tree next morning. His grave is now almost as big a draw at the cemetery as that of Michael Collins.

Ross is a good writer; this could so easily have felt like a collection of newspaper features loosely connected by theme but it doesn’t. The book is as concerned with the living as it is with the dead (something for which it has been criticised!) but the exploration of what draws the living to the dead is what in the end elevates this above similar offerings on the same subject. It is extremely readable, very polished and definitely highly recommended.