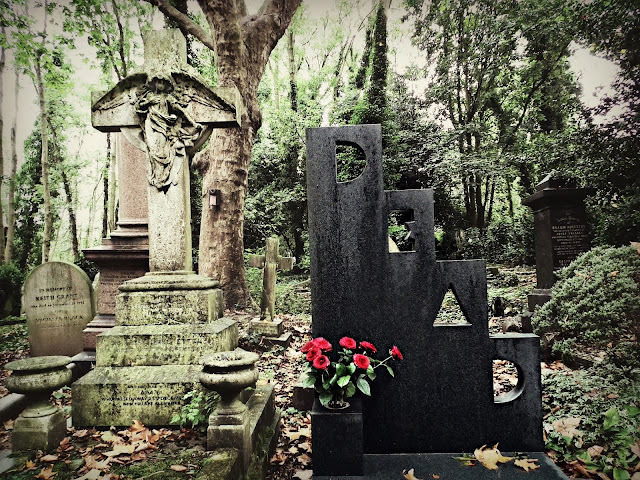 Late one evening a few years ago the talk got round to famous artists' epitaphs, and someone asked Patrick Caulfield what he would put on his gravestone. "DEAD, of course." Well put. Characteristically so. But very much not the last word on Caulfield, who has died of cancer aged 69.
William Feaver, The Guardian, 03 Oct 2005

I took these pictures of the artist Patrick Caulfield’s celebrated gravestone in Highgate cemetery back in 2013, six years ago. (I can hardly believe so much time has passed – tempus really does fugit when you are the wrong side of 50. I’ll be dead myself before I know it if I don’t pay more attention.....) I had forgotten about the photos until I was reading Martin Gayford’s excellent “Modernists & Mavericks”, a riveting history of the post war British art scene that features Bacon, Freud, Hockney and a whole load of other artists, including Patrick Caulfield, that he dubs the London Painters. Caulfield designed his own grave stone and took the unusual step of mentioning on it that he was dead. He is now remembered almost as much for this bit of iconoclasm as for a lifetime's work as a painter.

Caulfield was born in 1936 in South Acton; you had to be specific he always said because “Acton has got very different areas. South Acton, where I was born, was known as ‘Bagwash City’, because, as you walked along the streets where I was born, you smell the smell of damp laundry.” (A bagwash was a primitive laundry service, often offered from domestic premises, that was common before the idea of the launderette was imported from the United States in the 1950’s). Apart from laundry Caulfield’s only other early memory of Acton was being stung by a bee “That really sticks in my...I mean, it sticks in my mind, well it stuck in my arm or wherever at that time. But it seemed very, God! very serious to me at the time. I mean, because, this was my first association with nature I suppose, stung by the bee....” He never recovered from that early encounter with the natural world – his entire adult oeuvre was dedicated to the figurative painting, carried out in as un-naturalistic manner as possible, of manmade objects in manmade settings. When he left Acton Secondary Modern at the age of 15 he worked in the design studio of Crosse & Blackwell (Andy Warhol’s dream job?) and at the age of 17 he joined the RAF (he would have been called up for National Service anyway). When he left the air force he studied first at the Chelsea School of Art and then at the Royal College of Art when David Hockney was a fellow student. He was a commercially and critically successful artist, not perhaps so successful as Bacon, Freud and Hockney, but successful enough to be able to afford a path side plot in Highgate close to Malcolm McLaren and Jeremy Beadle (and Hercules Bellville).

Patrick Caulfield died on September 29 last year at the age of 69 and was buried a few days later at Highgate Cemetery. He was a convivial and generous man – both qualities are radiantly manifest in his art – and he and his widow Janet Nathan had arranged his funeral as an exuberant and joyful send-off.


As a large gathering of mourners assembled at the graveside, on one of the cemetery’s broader avenues, a jazz trio played some of the painter’s favourite tunes. Fine weather contributed to the bittersweet mood, bathing the scene in bright but already fading autumnal sunlight – an end-of-the-day light, which filtered through the trees in a way that might have pleased even Caulfield, who did not care much for the great outdoors. He was a man of few words, as he demonstrated in his monosyllabic choice of epitaph: ‘Dead’. The word will be carved into his headstone, in lettering of his own design.

His last painting, completed less than a fortnight before he died, was a tribute to his long standing partner and wife Janet Natham, Braque Curtain. According to the Tate, where the painting is now held, it “depicts a series of interlocking domestic spaces devoid of people and natural light. The patterned curtain of the title, was adapted from the wallpaper in the room depicted in Georges Braque’s The Duet 1937. This curtain and a lamp provide the painting’s focus as a place formed by artificial light. The painting plays with the casting of light and shade, notably in the doubled rendering of the lamp, asking which of these intersecting images is the lamp and which its shadow?”