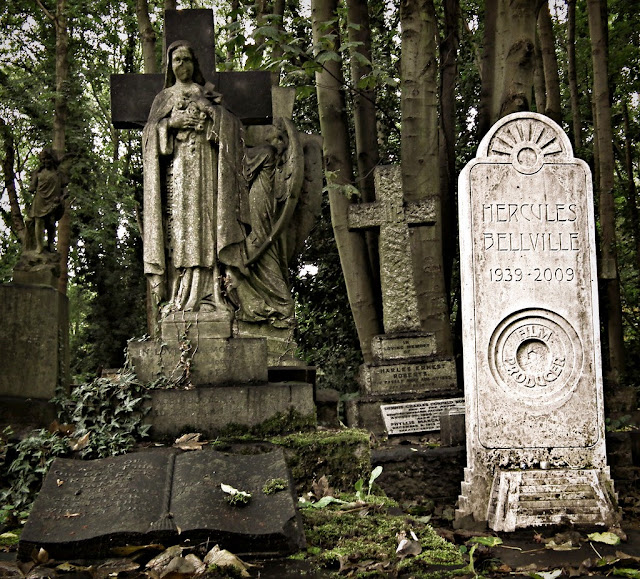 For a man who made a successful career in the cinema Hercules Bellville was unusually modest and self effacing. He dismissed his many achievements almost with embarrassment with one exception – his brief on screen appearance with Catherine Deneuve in Roman Polanski’s ‘Repulsion’ (1964)   Of this cameo he was inordinately proud despite the fact that only his arms were seen, emerging from the corridor wall to maul and molest the psychotic French manicurist. In the film Deneuve’s sexually repressed character descends into madness under the strain of living in a tiny apartment with her boisterous nymphomaniac sister and starts to hallucinate arms sprouting disturbingly from the walls. Bellville’s long elegant stranglers fingers intimately caress Deneuve in a famous scene where Polanski plays havoc with normal conceptions of desire and revulsion.


Bellville was born in San Diego in 1939 to an old Etonian English father and an American mother Hercules’ father was a bit of a character, a Hispanophile who spent his late adolescence in Spain and, at the age of 19 made one professional bullfighting appearance in the 1920’s, billed as  Inglesitos, a banderillero, at a village corrida near Madrid. When the civil war broke out he sided with the Nationalists and ended up fighting, briefly, with the falangists. He was appalled by the savage violence of both sides and sickened by the firing squads, especially as they left their victims twitching and writhing for some minutes after being shot and he could not bring himself to believe that they were actually dead. His Civil War experiences ended in farce when,  after a wine soaked lunch he decided to pilot his plane to Santander to be the first to congratulate Franco’s army as it occupied the newly surrendered town. News of the surrender turned out to be premature and Rupert landed, with a present of several crates of sherry, into a beleaguered town still occupied by the republicans. Only his British nationality stopped him being shot. The British navy later rescued him and sent him back to England. After spending the war as a test pilot he returned regularly to Spain where he became acquainted with Ernest Hemingway and imbued the young Hercules with his love of the country.
﻿
The family had made their money back in the nineteenth century in what was then the lucrative mustard trade. Hercules was independently wealthy and need never really have worked. But he fell in love with the cinema after working as an extra as a schoolboy on a Vincente Minnelli film being shot in Paris. His break came when Polanski gave him a a job as a runner on ‘Repulsion’. It was the start of a ten year long working relationship which saw Bellville starting to produce movies and to work as a second director (on ‘Macbeth’ and ‘Tess’). As well as Polanski we worked with Bob Rafelson, Bernardo Bertolucci, Michelangelo Antonioni and Julian Schnabel. and was involved in the creation of films like ‘The Passenger’, ‘Being There’, ‘The Postman Always Rings Twice’, ‘The Last Emperor’, ‘Sexy Beast’ and many others. He married his wife 48 hours before he died of cancer.


Seemingly no one ever had a bad word to say about Bellville. His obituary in the Guardian sums him up thus: “Hercules may have looked like a patrician dandy, but he was a great democrat; a great respecter of women; and a great human being. An avid collector of everything from Mao badges to fine art, he loathed materialism. In a milieu full of scorn and snobbery, he was a man of compassion and an egalitarian. In a world where celebrity gossip has become a currency, he remained as silent as the grave to which he has now sadly gone.”