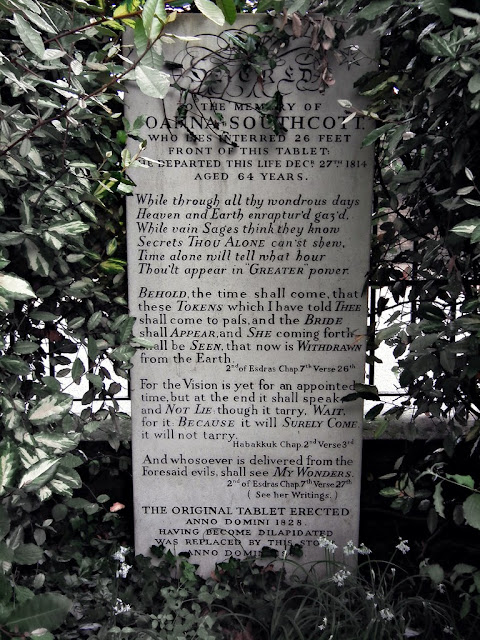 Joanna Southcott was a West Country prophetess, born in the Devonshire village of Taleford in 1750. She lived a quiet and uneventful life as a domestic servant in Exeter until the age of 42 when she was suddenly struck by the conviction that she had supernatural powers and was the “woman clothed with the sun, and the moon under her feet and upon her head a crown of twelve stars,” spoken of in Revelations. She heard a voice which predicted wars and famines and under its influence began to write and dictate prophetic verses. In 1801 she used her life savings to start publishing her writings, her first book being The Strange Effects of Faith; with Remarkable Prophecies. This brought her to the attention of the London followers of the prophet Richard Brothers (who had lately disappointed his disciples by getting himself incarcerated into a lunatic asylum) and they sent a seven man delegation down to Exeter with a brief to examine the credibility of this new, self proclaimed prophetess. When they declared themselves satisfied they arranged to bring her to London the following year to face yet another two rigorous public examinations by the Brothers brethren. By 1803 she had won over the majority of Brother’s disciples in London and embarked on a long missionary tour to win herself more followers in the provinces. 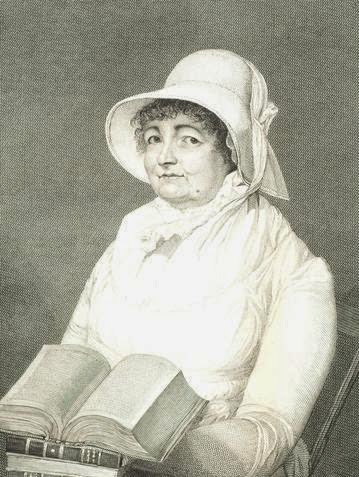 Between 1801 and 1814 Joanna published more than 5000 pages of prophetic writings and became the centre of a movement with, according to some estimates, around 20,000 ‘sealed’ followers. The membership card of the Southcottian movement was a seal issued by Joanna herself; a circle was drawn on a piece of paper and a simple message of acceptance scrawled across it. The believer and Joanna would both sign the paper and then it was folded and sealed with wax using a device of two stars and the initials IC (for Iesu Christi). A fee of between 12 shillings and a guinea was allegedly paid to be ‘sealed’ in this way.

In 1814 the 64 four year old virgin announced in The Third Book of Wonders, Announcing the Coming of Shiloh that she was pregnant and about to become the mother of Shiloh, a divine incarnation that would bring about a new world order of peace, love and justice. The public were not convinced and Joanna became the butt of some savage caricatures from the likes of Thomas Rowlandson and Thomas Tegg and of vicious lampoons in the popular press.  The date fixed for the delivery of Shiloh was 19 October 1814. When Shiloh failed to appear as expected Joanna realised that it was because she had omitted to provide the divine baby with a father. To rectify the situation, on 12 November she married John Smith of Blockley a respectable, elderly follower and friend who had selflessly offered himself to the prophetess in the role of Joseph to her Mary. But Shiloh still did not appear and then, to everyone’s shock, on 27 December, Joanna died at her home at 38 Manchester Street. Many of her stunned followers believed she was only in a trance and that she could be resuscitated and Shiloh still be produced. The aftermath was described widely by the press including The Stamford Mercury in a piece entitled “Dissection of Joanna Southcott.”


"The death of this miserable woman we stated in our last paper. It appears that the wretched enthusiast, before death, became herself doubtful of the issue which her infatuated "friends" positively anticipated. She therefore, in her lucid intervals, dictated a will, in which still professed her conviction that she had been visited by either a good or evil spirit, and that her womb contained a living creature of divine or  wicked origin. In  the hope that she might become re-animate, which she was satisfied would be the case, if she had been visited by the Lord,  she desired that she might be preserved with “every tender care for four days after her dissolution, the fourth being that which, under Providence, she expected she would be restored to life, and be delivered: if however, that period expired without any symptoms of re-animation, she then directed that her body might be submitted to the hands of skilful operators.” Her death excited no painful sensations in the bosoms of her disciples. They regarded her as merely "gone for a while." and with tender solicitude proceeded to wrap her body in warm blankets, to place bottles of hot water to her feet, and by keeping the room in a state of warmth endeavour to preserve the vital spark! After the event of her death the crowd which daily assembled in Manchester-street, opposite the depository of the body, was immense; and the enquiries made respecting her resuscitation were constant and anxious. To all such enquires, the answers given by the "chosen few" were consolatory and cheering. On Saturday morning the crowd again assembled at an early hour, and the most zealous of the followers did not hesitate to pronounce their positive conviction of her re-animation during the day. These predictions, however, to the mortification of the deluded multitudes were falsified; for the body began to display a discoloration, which at once proved  that the wretched Joanna was but mortal, and like other mortals subject to decay The hopes of her friends being thus frustrated, preparations were made to perform the operation which she had herself directed. At two o'clock on Saturday, fifteen medical men assembled. Besides these, there were also Parson Tozer, Colonel Harwood and one or two others of Joanna's followers. From the putrescent state the smell was dreadfully offensive and it required all the aid of tobacco smoke and burnt vinegar to render the place to be at all borne. The body having been placed upon a table Dr. Reece and Surgeon Want proceeded in the performance of their disgusting but required task. The result of this examination is contained in the following:


"We, the undersigned being present at the dissection of Mrs Joanna Southcott do certify that no unusual  appearances were visible, and no part exhibiting any visible appearance of disease sufficient to have occasioned  her death; that a number of gall-stones were found in the gall bladder and the intestines were unusually distended with flatus, and no appearance of her ever having been pregnant. The uterus was not distended, enlarged, diseased, but on the contrary smaller than is usual.


The curiosity of the profession having been gratified by this inspection, they took their departure, and the result having soon become public, the street was for a time in an uproar. Those of the followers who anxiously waited the event, skulked off  in great tribulation, and were happy to escape the view of the populace, who were outrageous towards any person they suspected of adhering to the to doctrines of the Prophetess. This indignation had in the early part of the morning nearly proved fatal to an old Lady, who with a most demure and sanctified countenance rapped at the late Joanna's door with intent to make enquiries respecting her re-animation. No sooner was she suspected to be a disciple than she was assailed with mud and filth. The female who was thus treated we understand, is the sister of Sir Charles Blicke. By the desire of Joanna, previous to her death, all the presents which were sent for the use of Shiloh and his mother, the crib, &c. are to be restored to the owners. Her remains were conveyed away privately for burial early on Sunday, and the time and place of interment known only to a very few.

Joanna’s disciples say – “Her friends know her to be dead, but the arm of  the Lord is not shortened; and if he is about to do a great work upon the earth, as they firmly believe he is, they know  that he can easily raise the dead to life as awake a person out of a trance. .Mrs Southcott's words have always been "that death or life would end the strife;" and on that ground her believers now rest the question."

Our readers perhaps will scarcely credit it, that besides the cradle, articles of furniture, and plate, purchased by the dupes of this wretched woman for the child, a very large sum of money was subscribed, and now in the hands of her Treasurer, the purpose of which was to purchase a piece of freehold ground near the Regents Park, to build a palace for King Shiloh! An eminent surveyor was applied to for a plan, which was exhibited and approved by all the dupes."

Joanna was buried on Sunday 1st January 1815 in the burial ground attached to the new St John’s Wood church. The funeral was conducted in strict secrecy to try and avoid some of the controversy that had attended her death. Parson Tozer, who attended the autopsy, took umbrage with the officiating clergyman and complained that the regular Church Service had not been gone through. The clergyman retorted that he had read the customary prayers for the dead. When Parson Tozer said that the customary prayers were not sufficient for such a holy woman and prophetess the clergyman lost his temper and said that he trusted he would never again be asked to officiate at the funeral of one who had lived by practising imposture and fraud, uttering blasphemies and died unrepentant. Joanna’s original headstone is severely worn and approaching indecipherability but still in place in the burial ground (which is now a public park). In the sixties a new headstone was raised a few feet away by the latter day Southcottians of the Bedford based Panacea Society.