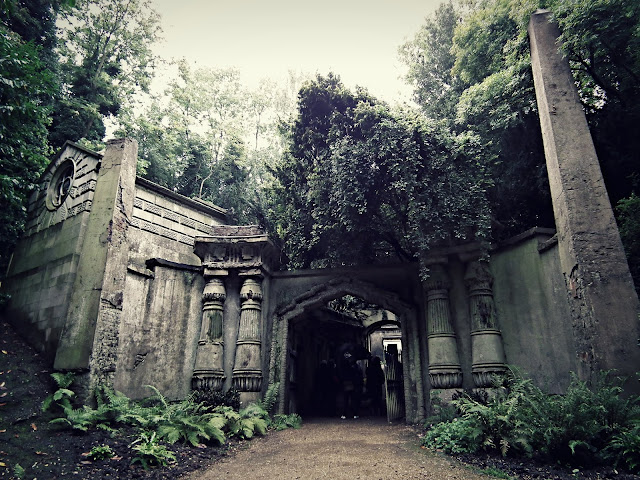 It may be the doyen of London cemeteries but I have never been especially fond of Highgate. Uniquely amongst London cemeteries (in fact uniquely amongst any cemeteries anywhere as far as I know) the Friends of Highgate charge an entrance fee for visitors to the East cemetery. The current charge is £4, which isn’t extortionate by any means, but one has the feeling that Karl Marx, who is after all the major draw amongst the permanent residents, probably doesn’t approve of this blatant bit of capitalism. Once you have paid your four quid you can roam freely and completely unsupervised and spend the whole day inside if you want.  Access to the older Grade II listed West cemetery is more tightly controlled and is by guided tour only. One of the reasons I like cemeteries is that in a city if 8 million inhabitants they give me the opportunity to get away from other people. I hate being herded around anywhere but particularly in cemeteries which I prize as little oases of calm in the general bewilderment of London. Having said that the tours are good, the guides knowledgeable and they only cost £12. But they tend to follow the same route around the cemetery and you are not allowed to stray away from your group or loiter over anything you find particularly interesting. The whole thing is just too controlled for my liking and has stopped me forming any sort of attachment to the cemetery itself. 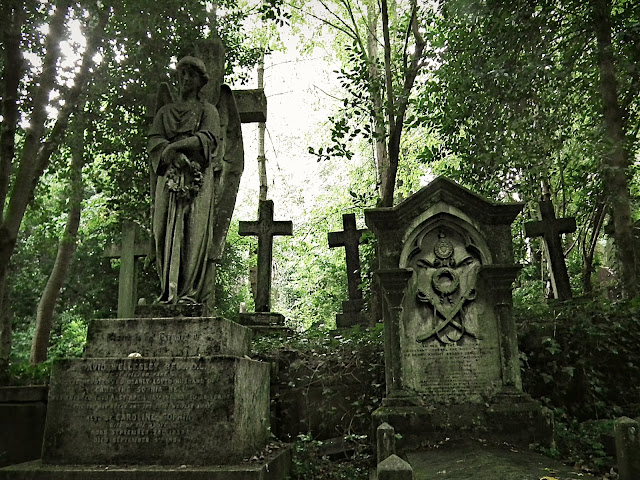 Highgate seems to exert a particular fascination over foreigners with taphophilic inclinations. Tracey Chevalier (American), Audrey Niffenegger (American) and Fred Vargas (French) have all set novels in and around the cemetery in recent years. Loren Rhoads (American), author of 199 Cemeteries to see before you die dates her own taphophile obsession back to a visit to Highgate in the early 1990’s. Her visit was inspired by a chance encounter with a copy of Highgate Cemetery; Victorian Valhalla in WH Smiths on Victoria Station and its iconic photographs of the cemetery by John Gay (aka Hans Göhler, German). Guy Vaes (Belgian) featured Highgate prominently in his 1978 book of photographs  Les Cimetières de Londres. The abandoned and overgrown Highgate of the 1970’s and 80’s photographed so lovingly by Gay has come to epitomise Victorian Gothic (even though the Victorians would never have allowed any cemetery to get into such a dreadful state of neglect). It is the cemetery converted to wildwood with toppled headstones and angels smothered in ivy that has found a special place in so many taphophile hearts. Only the English would so willfully neglect their burial places and allow them to revert so spectacularly back to almost untrammeled nature. Can you imagine the French letting Père Lachaise to get into the same state as Abney Park or Nunhead? 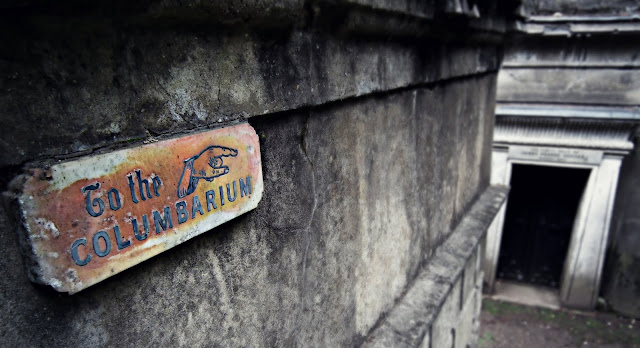 Highgate was the creation of Stephen Geary, an architect and entrepreneur, who was heavily involved in the Victorian burial reform movement. Like many who concerned themselves with the   campaign to abolish churchyard interments he had a marked proclivity for grandiose architectural styles (see Thomas Willson for example).  His first significant work was a sixty foot monument to King George IV which stood in an area then known as Battlebridge at the junction of Grays Inn, Pentonville and Euston Roads.  Neither the King nor his monument proved particularly popular and the giant statue was demolished in 1842, just six years after being built. Its nickname has lasted rather longer however – Kings Cross. Geary was a founder of the London Cemetery Company which founded Nunhead and Brompton as well as Highgate Cemeteries.  In 1830 the 17th century Ashurst Manor in Highgate was demolished and St Michael’s Church built on the site of the house. The London Cemetery Company bought, for £3500, 20 acres of the estate’s gardens due south of the new church, on the slopes of Highgate Hill. These were laid out as the cemetery with landscaping by David Ramsay and the first catacombs and the celebrated Egyptian Avenue designed by Geary himself. 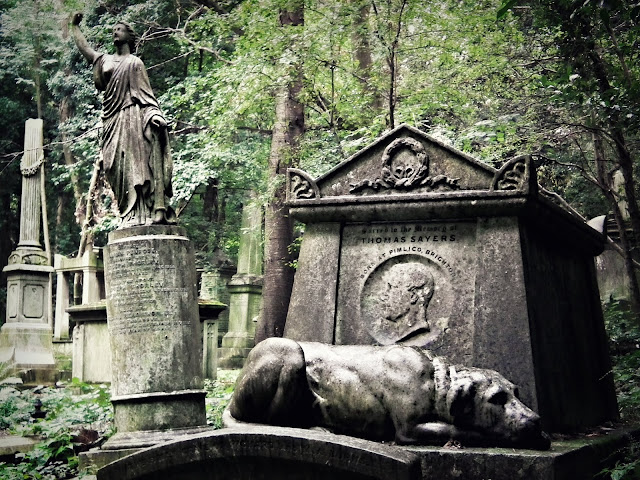 The cemetery was consecrated on the 20th May 1839 by the Bishop of London and the first burial, of the 36 year old Elizabeth Jackson of Golden Square, took place just two days later on the 23rd. Elizabeth was buried in a grave 10 feet deep, 6ft 6in long and 2ft 6in for which her family had paid 3 guineas. The depth of the grave and the additional cost (13 shillings more than the minimum price) were to allow for additional burials in the same plot and Elizabeth was eventually joined by three other relatives. Business in the newly opened cemetery was brisk – there were 204 burials in the first year and numbers substantially increased in the years that followed. By the 1850’s the company was charging between £10 and £94 for space in the terrace catacombs depending on how many coffin places were required, brick vault graves taking 6 coffins were £15 5 shillings or £21 for one big enough to take a round dozen. A common grave was £2. Demand was high enough to justify acquiring 19 acres of additional land on the other side of Swains Lane and opening what is now the East Cemetery. Around 163,000 people have been buried in 53,000 graves since the cemetery opened. The business plans of all the cemetery companies suffered from the same fundamental flaw – plots were sold in perpetuity meaning that income was high in the early years when the cemetery was empty but dropped off steeply when the available space for burials inexorably filled up. The cemetery started to hit financial problems in the mid twentieth century. By the end of the second world war there was little unused space in the cemetery, income was no longer sufficient even to maintain the grounds property. In 1975 the cemetery closed. 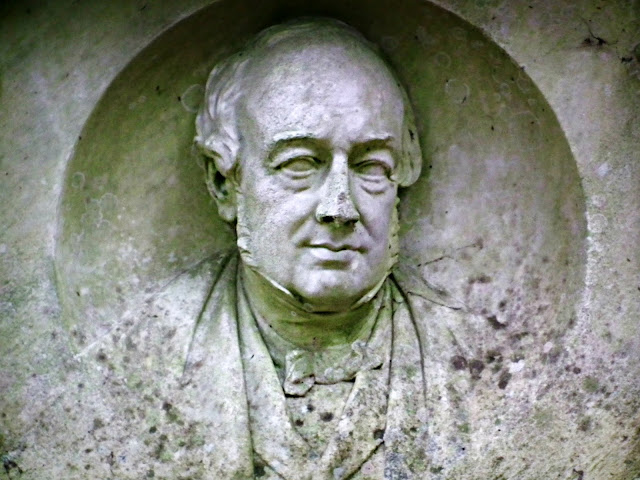 In 1865 William Justyne wrote in his Guide to Highgate Cemetery that “no cemetery near London can boast so many natural beauties.” He praised the hilly ground “rising in terraces”, the winding paths, the long avenues of shrubbery and said that in summer “when the birds are singing blithely in their leafy recesses….there is a holy loveliness upon this place of death, as the kind angels hovered about it…” The hyperbole started early. Justyne also praised the view of London from the cemetery grounds, “there spread out like a broad map, is the great metropolis of the world with its countless spires of every shape and almost every age.”  The rampant vegetation has long since obscured the views of London, you will need to go to Hampstead Heath to get a sense of what they once would have been.  Nunhead and Norwood   had views to challenge Highgate’s, and still retain them today..  Hugh Meller has to concede that “the one disappointment at Highgate is the moderate quality and variety of its monuments which seldom compare to with the best at Kensal Green or Norwood.” I can’t dispute that Highgate does have its own romantic charm but I can’t imagine ever loving it as much as I do Kensal Green. 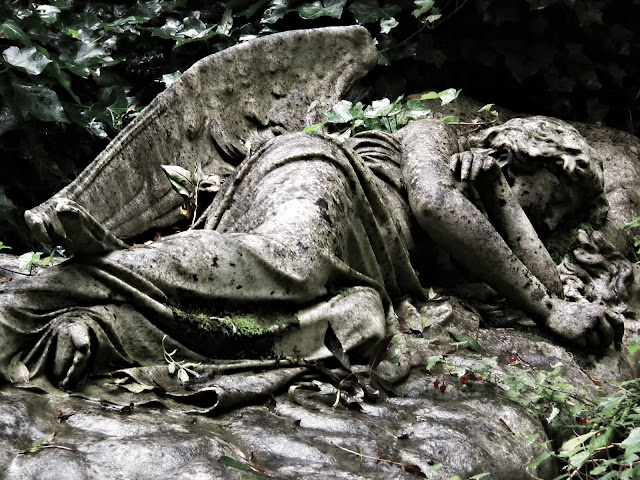