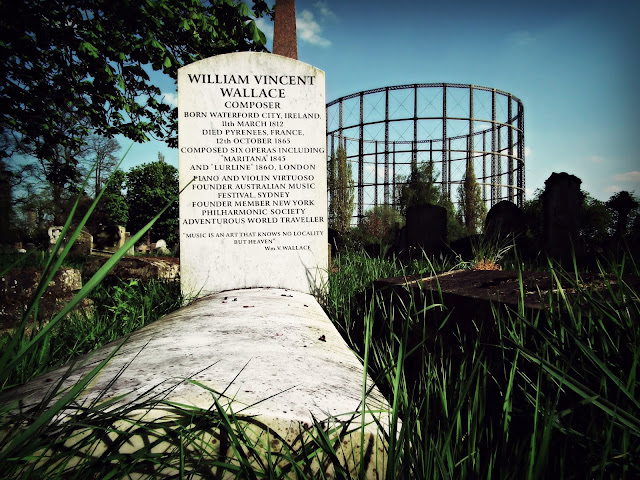 “He is a first-class eccentric,” said Hector Berlioz, the great French composer and conductor, in Les Soirées de l'orchestre (1852) of his friend, the Irish composer, William Vincent Wallace. “We have spent together, in London, many half-nights over a bowl of punch, he narrating his strange adventures, I listening eagerly to them. He has carried off women, he has fought several duels that turned out badly for his adversaries, and he was a savage yes, a savage, or pretty nearly one, for six months.” Berlioz then spends the rest of his feuilleton recalling how Wallace, with his “his customary phlegm” narrated his half year amongst the natives of New Zealand. Wallace was in Sydney and fell into conversation with the captain of a frigate. As they contentedly puffed on a couple of cheroots the captain invited Wallace to join him on a voyage to New Zealand. Wallace inquired about the purpose of the trip and was told that it was “to chastise the inhabitants of Tcwaewa-Punamu Bay, the most ferocious of New Zealanders, who took into their heads, last year, to loot one of our whaling-ships and eat its crew. Come along with me, the crossing is not a long one, and the expedition will be amusing.” Wallace accepted with alacrity and a few days later was under full sail to South Island with the English Frigate.  The amusement started almost as soon as the frigate was at anchor in Tcwaewa-Punamu Bay. The captain had given orders to tear a few sails, break a couple of yard arms, hide the guns and the company of marines on board and for just ten men to stay on deck and do their best to look lost and aimless. This gave “our frigate the appearance of a poor devil of a ship half disabled by a gale and no longer answering its helm,” Wallace told Berlioz “as soon us the New Zealanders caught sight of us, their customary caution made them remain quiet. But after counting only ten men on the frigate, and believing from our wretched appearance and the uncertainty of our movements that we were shipwrecked mariners asking for help rather than an attacking party, they laid hold of their weapons and made their way towards us from every corner of the shore. Never in my life have I seen so many canoes. They came from land, sea, bushes, rocks, everywhere. And remember that several of these boats contained as many as fifty warriors.” Once they were thoroughly surrounded the captain gave the order to throw open the ports and let the Maori warriors have a few broadsides from the ship’s guns. 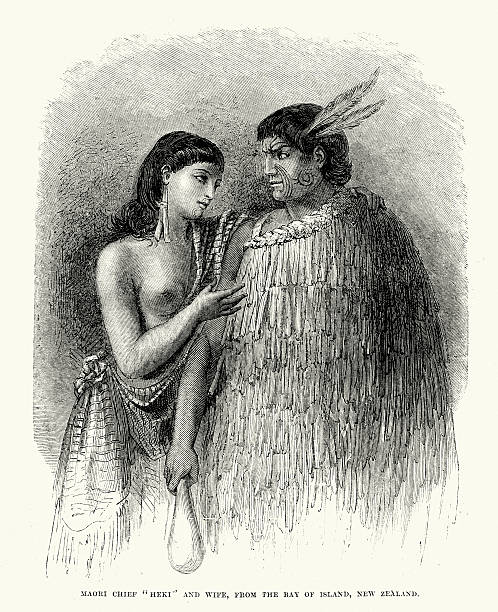 Wallace enthusiastically joined in the ensuing slaughter “with my double-barrelled gun, and a dozen grenades handed me by the master-gunner, I, for my part, destroyed the appetite of many New Zealanders, who had perhaps already dug the oven in which they had counted on baking me.” He says that he could not count the number of men that he had killed and enthuses “you cannot conceive the effect of my grenades in particular. They burst between their legs and sent them flying sky high!” Meanwhile “our commander stamped about, shouting through his speaking-trumpet: One more broadside! Give them bar-shot! Shoot that chief with red feathers! Out launch, out cutter, out yawl! Finish the swimmers off with the handspike! Knock them on the head, my lads I God save the Queen!” When the fighting finished “the sea was strewn with corpses, limbs, tomahawks, paddles, and wreckage from the canoes, while here and there the green waters were flecked with big crimson puddles.” Two chiefs are taken prisoner during the battle and an interpreter called to explain to them why they were attacked. “'Oh,' exclaimed the big chief, stamping violently on the deck, and gazing at his companion with savage enthusiasm, ‘Very well, then. The whites are great warriors!' Our procedure evidently filled them with admiration. They judged us from the standpoint of art, like connoisseurs, noble rivals, great artists.” Having taken the days extraordinary events in his stride Wallace is rather put out to discover that the captain plans to sail directly to Tasmania, a journey that will take rather longer than Wallace had reckoned on spending away from Sydney. When the ships surgeon asks to be left in New Zealand Wallace begs leave to join him living with the “cannibal chiefs”. He loses no time in going native and adopting the life style of the people he has just taken so much pleasure in slaughtering and by dint of prowess at the hunt is able to “captivate two charming little native girls, as lively and coquettish as Parisian work-girls, with large, sparkling black eyes, and eyelashes the length of my finger. Their shyness once conquered, they followed me like a couple of llamas, Mere carrying my gunpowder and bag of bullets, MoTanga the game I brought down during our excursions; at night each of them in turn served me as a pillow, when we slept in the open. Such nights, such stars, such a sky! That country is paradise on earth.” Not content with two acquiescent hand maidens to cater to his every whim Wallace fell in love with the chiefs sixteen-year-old daughter. His initial advances are rebuffed but our intrepid traveller soon discovers that the way to a princess’ heart is through a keg of tobacco. The princess, “delighted at possessing the precious keg, which she had persisted in not asking for from pure coquettishness, loosened her hair at last and dragged me palpitating towards the field of phormium” (the New Zealand flax plant). Wallace and his princess soon celebrate their marriage with a wedding feast at which a young female slave is roasted for the main course (Wallace, of course, refuses to partake though the ships surgeon helps himself to a slice of shoulder which makes him violently ill). He then lives in connubial bliss until it is time to return home; “when I announced my departure to her, what tears, what despair, what convulsions of the heart!” (From his bride of course, not from Wallace). On the day he leaves the distraught princess produces a knife and demands a token of her husband’s undying love. Instead of castrating the renegade she bares his chest and then “slashed me twice, making a cross-shaped incision, whence the blood spurted forth in jets. Immediately the poor child flung herself on my chest, which was streaming with blood, laid against it her lips, cheeks, neck, bosom, and hair, and drank my blood, which mingled with her tears; she screamed, she sobbed.” And if that wasn’t enough his “two charming little native girls” are also inconsolable; “Mere and Moi'anga had sprung into the water before the cutter's departure; I found them at the frigate's companion. There was another scene, amid heart-rending shrieks. In vain did I keep my eyes fixed on the Britannic flag; my strength failed me for a moment. I had left Tatea fainting on the beach; at my feet the two other dear creatures, swimming with one hand and waving farewell signs to me with the other, repeated in their wailing voices: 'O Walla, Walla!' (their way of pronouncing my name). What efforts it cost me to climb the ship's ladder! As I mounted each step, it seemed to me that I was fracturing a limb.” 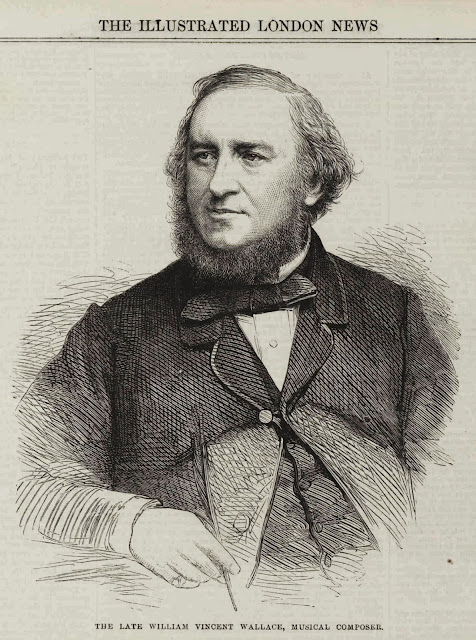 William Vincent Wallace, composer, virtuoso on the piano and violin, and, judging by his stories to Berlioz, incorrigible fantasist, was born in Waterford in 1812. His father was regimental bandmaster with the North Mayo Militia and Wallace was taught to play several instruments growing up including the clarinet, organ, violin and piano. He became the cathedral organist at Thurles in County Tipperary when he was 18. He also taught music at the local Ursuline convent where he fell in love with, and married, one of his pupils. He did travel, emigrating to Australia in 1835 where he separated from his wife in 1838,  just before travelling to New Zealand and engaging in his Ménage à quatre with his three island girls. From New Zealand he sailed across the Pacific and visited South America and the Caribbean before moving onto the United States and then returning to England. He stayed in London for a while (where he met Berlioz) before touring the continent and then moving to New York where he became an American citizen. Seemingly unable to settle anywhere he returned to Europe and died in France in 1865. His operas Maritana (1845) and Lurline (1847) were huge popular and critical successes.

The Dublin Evening Mail of 25 October 1865 gives an account of his funeral in Kensal Green Cemetery reprinted from The Star.

FUNERAL OF VINCENT WALLACE. The mortal remains of Vincent Wallace, who breathed his last ten days ago at the Chateau de Bagen, in the Pyrenees, were brought to England last week, and were Monday morning laid in the cemetery at Kensal Green. The chief mourners consisted of his three sons (two being by the lady whom he has now left a widow, and one by former wife) and his nephew. The body of the lamented composer was followed on its last journey, from the chapel where part of the burial service was read, to the grave which had been prepared for its reception, by some thirty or forty personal friends of the deceased, all of whom are well known to the general public. The ready, active sympathy with the misfortunes of others which the musical profession invariably evinces prompts them not merely to assist their brethren while living, but to pay them due respect when dead. So around the last resting place of Vincent Wallace were assembled composers who had been his rivals as well as his friends, singers who had interpreted his works, and journalists who had spread abroad their fame. Among those present were Professor Sterndale Bennett, Benedict, Mr Macfarren, Mr Arthur Sullivan, Mr Brinley Richards, Mr Henry Smart, Mr Osborne, Signor Ferrari, Signor Lablache, Mr Henry Leslie, M Lemmens, Mr Wood, Mr Weiss, Mr Hogarth, Mr Campbell Clarke, and many others for whose names we can find no space. Thus surrounded, within view of the giant city whose autumnal dreariness his graceful genius had so often lightened, Vincent Wallace was laid down in the narrow bed in the like of which all must sooner or later rest. When the solemn words, “Earth to earth," had been said to their accustomed ghastly accompaniment, many pressed forward to take their last look at the coffin, the simple inscription on which ran thus: “Vincent Wallace, died October, 1865, in his fiftieth year." The grave is exactly opposite that of Tom Hood, conspicuous by reason of the graceful memorial which, thanks to the enthusiasm of some young admirers of his genius, was raised just thirteen years ago. So after all his troubled, eventful, adventurous life—after travelling on every continent and sailing across every sea—Vincent Wallace comes home at last to rest, mid worthy companionship, in the cemetery that is honoured by so many illustrious names.