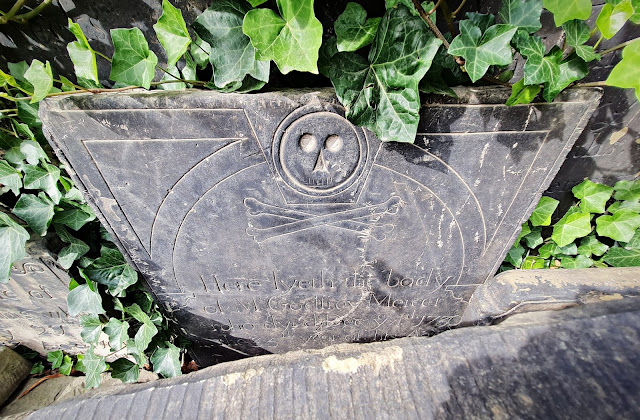 I was in Chesterfield earlier this week for a funeral. Despite being in exactly the right location funerals are, frustratingly, not occasions that usually present the opportunity to do any cemetery exploring. I would have quite liked to have a look around Brimington Cemetery (which apparently dates from the 1870’s), but I was otherwise occupied at the crematorium and it is bad form to slip off after the service to roam aimlessly around the headstones as though you don’t give a fig for the deceased. I arrived at Chesterfield 15 minutes before my lift to the funeral which did give me the opportunity to walk the two hundred yards from the station to St Mary’s and All Saints church with its famous crooked spire. My photograph is taken from the wrong angle and doesn’t do it justice. Dating from 1362 local legends generally attribute the twist in the spire to the Devil; a blacksmith drove a nail into his satanic majesty’s foot causing him to hop with pain across the town and kick out at the spire in anger as he passed. Or alternatively, when the devil roosted on the spire one night and wrapped his tail around the spire to anchor him to his perch the parishioners rang the bells to scare him off. The startled devil flew up without bothering to unwind his tail and the spire twisted as a result.  If the Devil didn’t twist the spire folk lore says it was a local virgin who got married in the church. The church was so surprised to see a virgin bride in Chesterfield that it twisted itself around to have a good luck. It is also said that it will untwist itself when another virgin gets married in the town. Sensible people attribute the twisting of the spire to the warping of the unseasoned wood used in its construction and other building defects such as the lack of internal cross bracing and the heavy used of lead tiles on the south side of the roof. 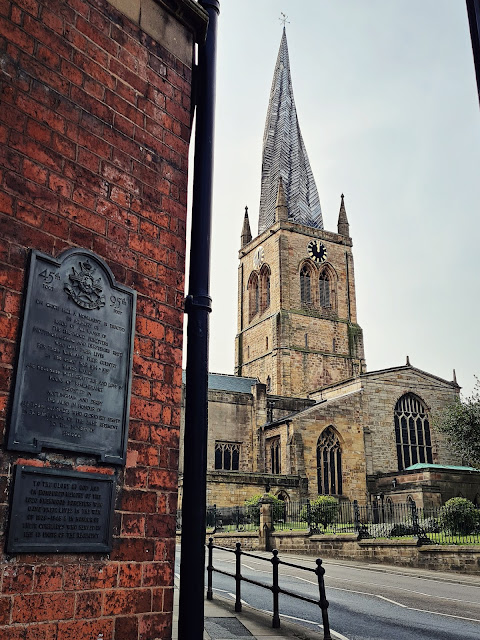 I had time to have a quick look around the church yard to see if there were any interesting memorials. There are still headstones standing on the north side of the church, all of them dating from the 19th century as far as I could see. There was nothing particularly eye catching though apparently there is a French officer, a P.O.W. from the Napoleonic Wars, buried there with a headstone in French and English. On the south side of the church yard the headstones have all been cleared and some of them stacked against the boundary walls. The south wall is taken up with a hundred or so large ledger stones; whether they came from the church yard or from inside the church itself I don’t know. They are stacked four or five deep and it is impossible to see any of them clearly except the smallest at the front. Along the western wall is a mixture of ledger and head stones. Hidden behind a larger headstone is a beautiful stylised memento mori dating from the 1730’s; its concealed position makes it very easy to miss and very difficult to photograph.

Beneath the excellently preserved headstone, until it was relocated against the wall, once ‘lyeth the body’ of Mr Godfrey Mercer ‘who dyed Dec ye 4th 1730’. The parish register records that he was buried on 7th December, the only interment that took place that day.  St Mary’s burial register graphically demonstrates the prevalence of child mortality in the early 18th century – there were seven burials between the 5th and 11th of December and 5 of them were children. Details of Godfrey’s life are spare – he was baptised at Chesterfield in 1696, the son of John Mercer. We don’t know his occupation or where he lived in the town but we do know that he married when he was 26, on 23rd June 1723 to Mary Shentall aged 22. Bride and groom were both from Chesterfield but the marriage took place at St Giles in Matlock.  The couple had no children before Godfrey died aged just 34 in 1730. Mary lived until she was 70 but never remarried; the parish register records her as Mary Widow Mercer when she was buried on 1st April 1771. 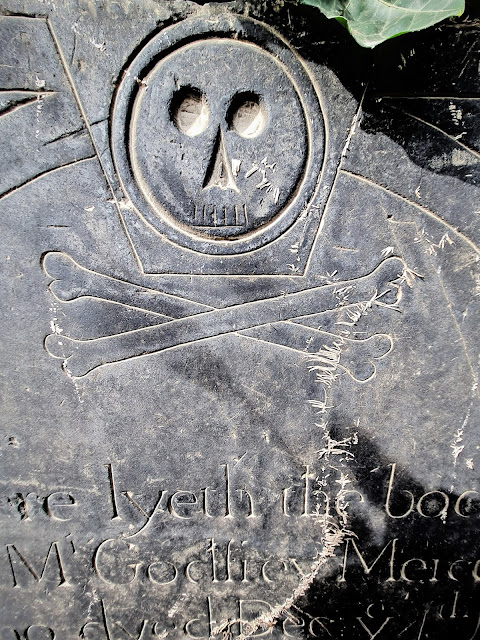