At the end of October I had planned a day out in Finchley taking photos in the two big cemeteries up there. The weather forecast had been promising wall to wall sunshine for most of the week and then with less than 24 hours notice the meteorologists changed their minds and said that the morning would be overcast with intermittent bouts of heavy precipitation (rain to you and me).  I love cemeteries but I hate trying to photograph anything in the rain. I decided I needed something to do inside until the sun was scheduled to reappear in the early afternoon. Golders Green Crematorium is a 30 minute walk away from the St Marylebone Cemetery in Finchley and I had wanted to visit the columbaria there for some time. When I checked access arrangements they seemed pretty casual – turn up at the crematorium office and ask to see them, no advance appointment required. It seemed worth a try.
That morning was as overcast and rainy as the forecasters had promised as I trudged my way up the hill from the tube station to the crematorium. I took a few pictures under the portico (dodging the funeral parties – there were at least three cremations that morning) and then presented myself at the office to ask if there was any chance of seeing the columbarium. The receptionist looked a little dubious and checked with her colleague, “Doesn’t Eric have appointments this morning?” The colleague shrugged noncommittally so Eric was called on his mobile. He did have appointments, with some gentlemen from Oxford University who wanted to visit the remains of a Georgian nationalist kept in the columbarium. He could fit me in later I was told, if I didn’t mind coming back at midday. I passed an hour or so in Golders Green Jewish Cemetery which handily lies just across Hoop Lane from the Crematorium. Jewish cemeteries are a bit dull, particularly under persistent drizzle, and I wandered the endless rows of plain gravestones (the Ashkenazi half of the cemetery has vertical headstones, the Sephardi half, flat ledgers) trying unsuccessfully to find something interesting to photograph. At 11.45 I crossed the road back to the crematorium and waited a few minutes in the office until Eric came to collect me. 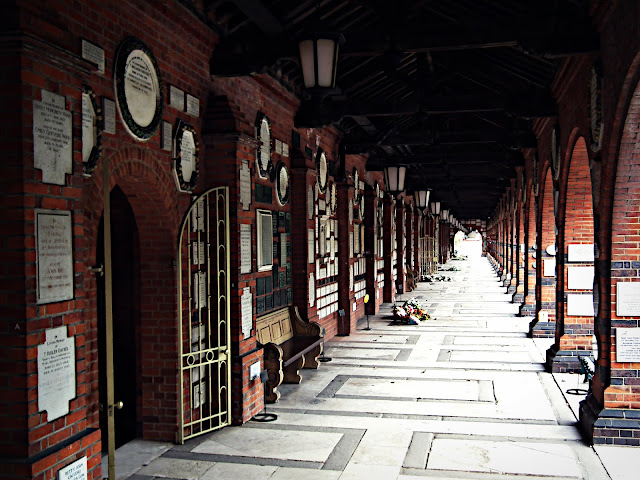 I may be guilty of stereotyping but I expected a crematorium employee to be at the very least lugubrious, quite likely sombre and perhaps even positively funereal. Eric Willis turned out to be a breezy, energetic 70 year old with a noticeable Lancastrian accent and apparently boundless enthusiasm for his place of employment. He does dress in black, but that is his only concession to his profession.He presented me with a card which described him as being in the Maintenance Department of the crematorium and as a historian; his ostensible day job is keeping the fabric of the building in working order but he seems to spend much of his time operating as a de facto tour guide. As I was to discover his tours are conducted with almost apostolic fervour;  he is determined to convince you that every grisly rumour you have heard about cremation is untrue. If his plumbing is as good as his guiding, he is an excellent all rounder. He started his tour by sounding me out about what my interest in the crematorium was. I was only expecting to see the columbarium but didn’t mind starting the tour by being ushered into one of the wood panelled chapels where Eric showed me the cross, crescent moon and star of David altar pieces that are kept stowed behind a curtain to be used according to the religious affiliations of the deceased. He pointed out the rollers discretely hidden by the table top on which the coffin is placed during the service. Much to my surprise he opened the door of the chapel to take me into the back and show me the other half of the table, cut off from the chapel by a curtain hanging across a hatch. At the appropriate moment of the service the electric rollers are set into motion and the coffin glides smoothly through the curtain and into the back.


“There are the doors to the original ovens,” Eric said, nodding at what looked like a wood panelled wall, before taking me round the corner and adding “the new ovens are here.” This I was not expecting, to be so casually allowed into the business end of the crematorium. All three furnaces were in operation and a coffin stood on a gurney patiently waiting for one to be vacated. Eric who carries a thick folder of diagrams, print outs, and press cuttings with him at all times, opened it to show me an illustration of the inner workings of a cremation furnace and explain how the oven is preheated to 850 degrees centigrade before the coffin is slipped in. He fishes in his trouser pocket and produces a small photo album which he flips open to show a snap shot of a coffin bursting into flames the moment it enters the furnace. He shows me more photos of the cremation process, coffin burnt away to reveal the dark outline of the occupant, occupant reduced to black skeleton, black skeleton reduced to cremains - calcined bone fragments and not much else. Eric put his photo album back into his pocket and glanced at the waiting coffin. “Chipboard,” he said knowledgably, the giveaway he told me was that there were no coffin handles, chipboard not being strong enough to support the weight of a human body on screwed handles. We walked around to the other side of the furnaces where Eric glanced in at a small porthole. “That ones nearly done,” he said, inviting me to take a peek. It took a second or two to realise that I was looking at a blackened skeleton engulfed in flames. The head was pointing towards me so that I was looking at the top of the skull, beyond which I could see the rib cage. It felt quite natural to be looking, not remotely ghoulish. There was something quite comforting about it, almost cosy and for the first time ever I began to feel that perhaps cremation isn’t such a bad way to dispose of our mortal remains. I stood chatting to Eric for a few more minutes before he took another glance into the porthole. “Oh, the skull’s gone,” he said, making way for me to have a look. He showed me where the calcined bone falls through the grilled floor of the furnace into a metal container. Once the cremation process is finished and the furnace cooled any remaining bones are carefully swept into the container as well.

To produce the fine white ash that most of us think of as the end product of the cremation process the calcined bone has to be ground into powder. This is done in a cremulator, a machine that looks like an old fashioned heavy duty spin dryer, the type that opens from the top rather than the side. Inside the perforated drum are a couple of dozen extremely heavy stainless steel balls (heavy enough to break your toe if you were clumsy enough to drop one on it). The bone is added to the drum and the machine churns bone and steel together for ten minutes or so, reducing it to a powder as white and fine as sifted flour. From there the ash is transferred to a labelled plastic container and shelved while it waits to be collected by the funeral director, who will bring along the urn chosen by the family as the final receptacle. Eric suddenly remembered there was a step in the process before the cremulator. There is one other element to a cremation, other than bone, that won’t burn, metal. This is usually coffin nails but occasionally there is something else metallic actually inside the body being burnt, generally knee or hip replacements. These are removed from the bone remains with a powerful magnet; Eric pulled it out of its guard and waved it around like a light sabre. He then showed me a dusty box of artificial knee joints and other bits and pieces that had been recently removed from various cremains, including the metal skeleton of a teddy bear.


There was something very reassuring about Eric’s tour behind the scenes. I was impressed by the crematoriums openness; there were no dirty secrets here, not in a place where they were willing to let total strangers wander in and see the whole process at work. And Eric does excellent public relations for the cremation business, it is no wonder that his bosses allow him to down tools and show anyone interested around. From the crematorium Eric showed me around the columbaria. Golders Green has three; the west columbarium is a three storey Romanesque tower completed in 1902 whose most visited occupant is Bram Stoker and there is an east and new columbarium. Eric is happy to show you around all three and introduce you to some of its more famous remains which include Sigmund Freud and Anna Pavlova. As we stood chatting outside I asked him how long he had worked for the crematorium. About twenty years he told. He had originally come to London in 1968 from his hometown of B……,(now I can’t actually remember where in Lancashire Eric is from, somewhere beginning with B, but apart from Manchester and Lancaster, everywhere in Lancashire begins with B so that isn’t much help, Bury, Bolton, Burnley, Blackburn, Blackpool, Bacup, one of those) accompanying his wife whose brother who was a private detective and wanted her to work as his secretary to her. Eric was a plumber and had no trouble finding work but when he was made redundant in the late nineties he fancied a change and took a job in maintenance at the crematorium. His boss was responsible for the guided tours at that point but when he went off sick Eric found himself expected, at very short notice, to take over. It was sink or swim but Eric found himself taking to it like a duck to water. He should have retired years ago but he loves job and he loves the crematorium so much that he can’t bring himself to give it up. He is very proud of what he does “google me”, he said, “I have friends all round the world because of this job.” Google him, it’s true, he does. He showed me press clippings from German newspapers, emails from people who came once and still stay in touch with him years later, print outs of blogs and visitor reviews that all have nothing but praise for him. At one point we were discussing the Philipson Mausoleum which stands in the crematorium grounds. He flicked through his folder to a print out of a web article. The wording looked familiar but I still had to read a whole paragraph to realise they were mine. “I wrote that!” I told him. He wasn’t as excited as I was, in fact he didn’t seem at all impressed by the coincidence. Still, I couldn’t hold it against him. He have me the best morning out I’ve had for years. Thank you Eric.
Posted by David Bingham at 14:25