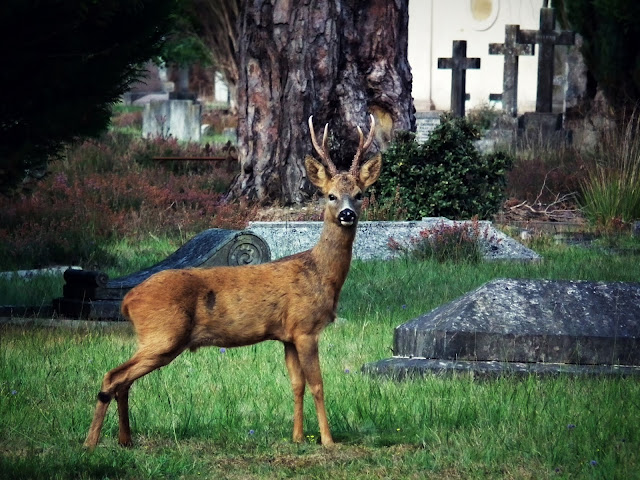 Visiting Brookwood Cemetery I did not expect to spend almost as much of my time deer stalking as grave hunting. It had been a last minute decision to go to Woking; I’d actually planned to spend the afternoon at Kensal Green. I had wanted a day off work but couldn’t get the morning because of a meeting I absolutely had to attend. On the way to the office I received a message saying the meeting was cancelled, my boss let me take the whole day off and I swiftly rejigged my plans to take advantage of the extra half day. It was a glorious late summer day. The sun was shining in a cloudless blue sky but luckily a breeze kept the temperature from rising too steeply.  I wasn’t really suitably dressed for a day out in the country, being in a black pin stripe suit. In the cemetery I could have easily been taken for an undertaker I suppose. 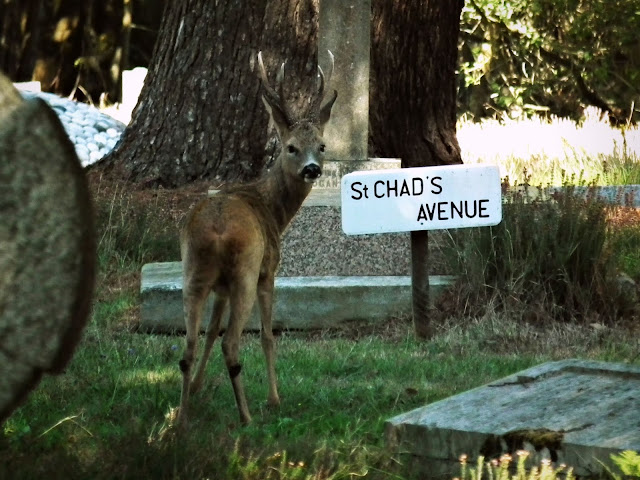 Uniquely I think, in Britain at least, Brookwood has its own train station, reached directly from Waterloo (making my way to the train I was swimming against the tide of commuters pouring along the platform on their way to their offices, shops and other places of relentless wage slavery). I was only the only person who got out there. The cemetery is huge and not quite what I expected. I’ll write about it in another post. Just before lunchtime whilst I was taking photos of a mausoleum, from the corner of my eye I caught something moving swiftly out of clump of bushes. I looked up to see the back end of a roebuck disappearing amongst a group of tall headstones. I was mildly surprised but not tempted, at that point, to try and follow. An hour later I was sitting on a tree stump in the sunshine, my jacket off and draped over a funeral urn, eating a sandwich when I saw the deer trot briskly over the road in front of me and take cover under some trees. I stuffed the last of my sandwich in my mouth and threw on my jacket before setting off in pursuit. I cornered my quarry standing next to a road sign announcing St Chads Avenue. As I crept up, telephoto in trembling hand, he watched me nonchalantly over his shoulder, even letting me take a couple of shots before bounding off. For the rest of the afternoon our paths crossed at various times and when they did I trailed my fleet four footed acquaintance as best I could. He gradually started to get used to me I think. He certainly realised I didn’t move quickly enough to pose any sort of threat. He wasn’t dealing with a young Finn Mac Cool who could outrun a deer and wrestle them to the ground before finishing them off with his knife.  After a while he didn’t even bother running from me. When he was tired of my presence a brisk trot was enough to leave me gasping for breath in his wake. But he was pretty tolerant and would stand there watching me creep up on him, nose and scut twitching in unison, posing when I paused to take pictures. In the late afternoon two deer broke across the path in front of me. I thought they were two does at first but 10 minutes later I stumbled across the roebuck in the company of a doe so I must have been mistaken. She took off as soon as she caught sight of me but he stood his ground, allowing me to get my best picture of the afternoon (the one at the top of this post if you aren't sure which one I'm referring to). 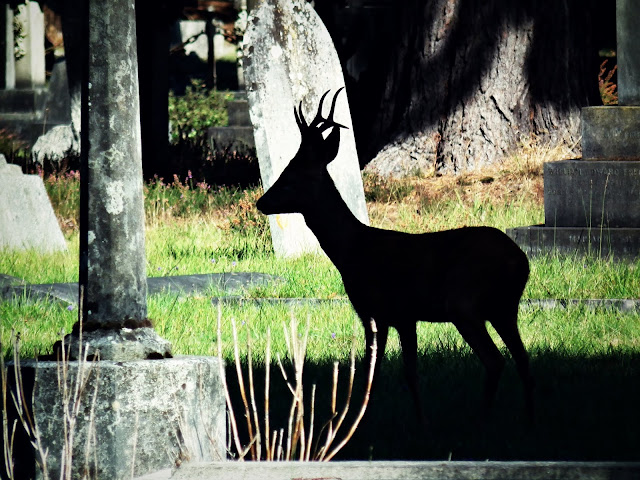 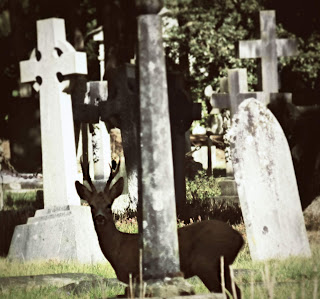 Roe deer are not unusual in cemeteries either in the UK or in the United States. In the UK they have been spotted in cemeteries from Sussex and the South coast all the way up to the Glasgow Necropolis. Old cemeteries with their patches of woodland mixed with carefully maintained lawn make ideal habitats. Flowers left on graves are an added attraction. Roe deer love cut flowers, particularly roses. In some places they are considered a pest because of their pilfering of funeral flowers.   In Dufftown, in Moray, home of the Glenfiddich distillery, residents are furious with the local roe deer who brazenly filch flowers from Mortlach cemetery. Some of them demand that the local council take tough action the borough’s cervids. Miss Ross, the village florist (Rustic and Roses on Fife Street), says that her customers “come in and tell us with disappointment that flowers bought from us have been eaten, sometimes on the day they have been put down. It is very upsetting, and it costs a lot of money.” She has been using a special spray on her floral tributes, meant to deter rabbits but so far it has been a losing battle. Moray council has however responded to the clamour for action from the community.  A spokeswoman confirmed that requests for teeth proof metal cages to protect floral tributes can be made through local funeral directors and will be supplied free by the council. 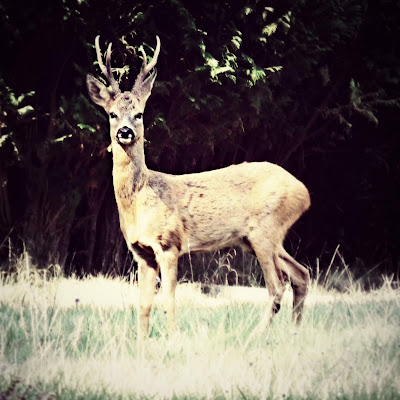