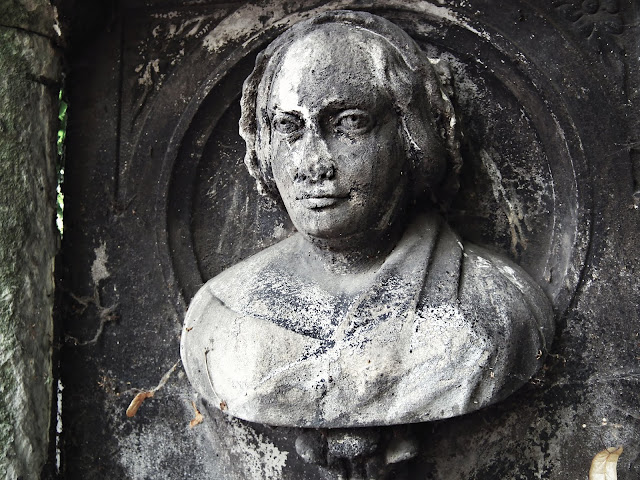 James Aspinall Turner MP: “All that you infer from this transaction is, that Mr. Levy is a very sharp man of business?”
George Ramsay, Assistant Director of Stores and Clothing: “Very.”


Report of the Commissioners Appointed to Inquire into the State of the Store and Clothing Depôts at Weedon, Woolwich, and the Tower (1859)


This is the only memorial singled out for attention in Brady Street in the London East volume of Pevsner’s Buildings of England.  The cemetery is, according to Pevsner, “crowded with mainly later Victorian monuments, some of considerable lavishness (e.g. that of Hannah Levy, c1850)…" Although he seems to have muddled up Miriam Levy and Hannah Rothschild, the date indicates that he is definitely referring to the Levy memorial. In truth the monument erected by the middle class rag merchant Moses Levy for his wife is considerably more lavish than the relatively plain identical double chest tombs of the multi millionaire banker and financier Nathan Meyer Rothschild and his wife Hannah. Sharman Kadish in Jewish Heritage in Britain (2006) points out that the memorial has “a very rare Jewish example of a bust of a woman: Miriam, wife of Moses Levy, identified as Miriam Levy 1801-1856, a welfare worker who opened the first soup kitchens in the East End. Her tomb is in the form of a square obelisk with four faces, decorated with figurative reliefs.” We know very little about Miriam Levy but whenever she, or the memorial, is mentioned it is obligatory to say that she was a welfare worker who opened the ‘first kitchen for the poor in Whitechapel.’ Some extend her charity work to ‘the sick and mothers in confinement’, quite possibly assuming she was also responsible for the founding of the former Jewish Maternity Hospital in Spitalfields, popularly known as Mother Levy’s nursing home. In fact there is little evidence to suggest that she was a charity worker, and the respected Cemetery Scribes website, which has investigated the claims remarks that ‘her much vaunted connection to the founding of the Jewish Soup Kitchen still eludes us.’ As the mother of ten children who died at the relatively early age of 50 it is difficult to imagine her ever finding sufficient time to spare from the demands of husband and offspring to feed or nurse the deserving poor of Whitechapel. 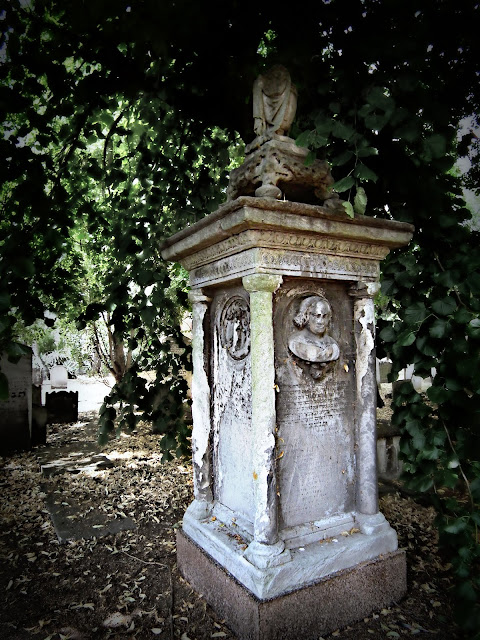 The inscriptions on the memorial are in English and Hebrew. The much eroded English is just about decipherable:  Beneath this monument .. deposited the remains of Miriam the beloved wife of Moses Levy Esquire of [L]..[r]oke Terrace, Notting Hill ....... who .. her .. life .. on the .. of November AM ..[5]. 561[6] in her fiftieth year of her age. This monument is erected by her disconsolate husband may her soul rest in peace.
The Hebrew Inscription (courtesy of CemeteryScribes) is a little more effusive and interestingly contains a discrepancy in her age with the English version: 'The tombstone of a pleasant woman; beloved of her husband and of her children too [alt. and a jewel to her children]; departed her home to the deep distress of the husband of her youth and all her family; she is Miriam bat Mr. Yekutiel, the wife of Mr. Moshe bar Eliezer; passed away on Monday 2nd Kislev and buried on Wednesday the 4th inst.; and her husband ,descendants and all her family will deeply mourn for; and "the days of her life" were fifty five years.'
Moses Levy was born in Aldgate c1790, the son of Eliezer and Rosetta Levy who were almost certainly born somewhere in Eastern Europe. Moses was in his fifties before he appears in civic records. In the 1841 census he gives his occupation as rag merchant and he lives with his wife (whose name was recorded as Mary) 9 children (Hannah, Israel, John, Rosetta, Isaac, Sarah, Lewis, Isabella and Rebecca) and one, overworked, servant, Martha Dunstan, in Gravel Lane, E1. As Moses’ business premises are known to have been at 109 Gravel Lane it seems likely that the family effectively lived ‘above the shop’. By the time of the 1851 census there had been something of a miraculous change in fortune for this Jewish East End family. 4 of the children were no longer living with their parents and Miriam had given birth to another daughter, Matilda, in 1844. Moses’ now gave his occupation as the respectable sounding Government Contractor rather than rag merchant and the family was living at Highbury House in Lavender Hill, a house large enough to be called a mansion, in what was then the Surrey countryside. The 3 live in servants now included a coachman! 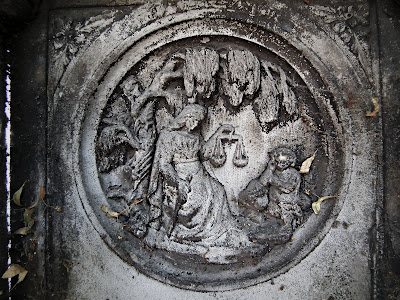 How did Moses change his fortunes around? On 28 June 1858 the Tory MP  for Chippenham, Henry George Boldero, an ex army man who was still referred to by Hansard as Colonel Bordero, stood up in the House and ‘humbly addressed’ Her Majesty (in the form of Her Government) to institute a Royal Commission looking at the War Department’s clothing establishment at Weedon.  One of the scandals of the recently ended Crimean War had been the inadequately clothed soldiers and the suffering caused as a result during the severe winter weather conditions in the Caucasus. Formerly regimental Colonels had been responsible for kitting out their own troops with funds supplied by the army. Almost all of them took a cut, larger or smaller, from the money that was supposed to be used for their solder’s kit. A new system was introduced after the war with the Government taking charge of procurement. Unfortunately the new arrangements seemed as prone to financial leakage and irregularities as the old and no doubt Colonel Boldero was pleased to be able to outline the intelligence he had received about the behaviour of War Department Officials, particularly the Assistant Director of Stores and Clothing at Weedon Army Barracks and Government contractors. The substance of Colonel Boldero’s allegations were that George Ramsay, the Assistant Director, was disposing of ‘surplus’ stock to contractors at a loss to the army which then bought back some of the same stock making a double loss for the army and an instant profit for the contractor and, by implication, George Ramsey himself.   According to Hansard he told the house “during the years 1856–7, 800,000 pairs of boots had been received at Weedon, and that 170,000 pairs had been disposed of, but where they had gone to it was impossible to ascertain. A person named Levi, who had made a large fortune, and who was rather shy about coming forward to give evidence, had stated that he had bought 50,000 pairs, and that he had paid for them at an auction at the rate of only about 5s. 5d., notwithstanding that they had cost the Government from 8s. 6d. to 8s. 9d. per pair. Those boots bought at 5s. 5½d. had been resold to persons who were in the habit of contracting for the army, and one of the witnesses who had been examined had honestly stated that he had supplied five militia regiments with some of the boots thus cheaply purchased, and that the Government had paid for them at the rate of 12s. a pair.” 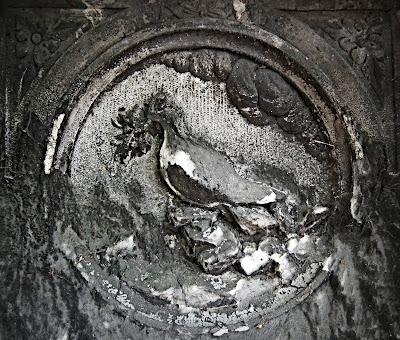 Rather surprisingly Lord Palmerston’s Whig administration listened to Colonel Boldero and appointed a three man Royal Commission to look into the “state of the Store and Clothing Depôts at Weedon, Woolwich, and the Tower.”  The chairman was Henry James Selfe, barrister, metropolitan police magistrate, and, in his spare time, a dedicated chess player supported by James Aspinall Turner a Manchester cotton manufacturer, Whig MP and amateur entomologist. Turner’s close cross examination of Moses Levy was reported in detail in the Times and other newspapers. In his evidence he reported that he was living at 2 Stanhope Terrace, Hyde Park, and confirmed that his place of business was 109 Gravel Lane, Houndsditch.  He was asked about the purchase of 20,000 pairs of boots which it was claimed he had bought in 1856 from Weedon and which had then turned up at the Tower of London having been bought back by the army in November and December 1856. Moses denied having bought any army surplus boots in 1856 but said that he had bought a consignment of boots that had come from Deptford in July 1857, which he had sold onto a Mr Shaw, and which may perhaps had been purchased by the army from him.  He admitted that he sometimes made mutual arrangements with other contractors not to bid for certain consignments, effectively eliminating competition and keeping the price low. Though he denied buying boots at the Tower he admitted buying 20,000 yards of Oxford Gray cloth at 2 shillings 8 pence a yard from a friend who had bought at 2 shillings 7 and a half pence a yard from the army. He then sold it on to Gilpin the army clothier in Northumberland Street at a price ‘he was not dissatisfied with.’ He did not see anything wrong with the transaction, ‘it was very good cloth and ought not, in his judgement, have been sold. He did not see why the War Department authorities could not have made use of it.’  Mr Turner, the Cotton manufacturer, remarked that the impropriety was not in the witness who bought the cloth, but in it having been to the Tower for sale in the first place. Mr Selfe, who clearly fancied himself a wag, said that the cloth ‘was such as might have been available for the Irish people if it had not been made into trowsers for soldiers.’ The court dutifully laughed, perhaps even Moses raised a smile. After some further questioning by the Chairman during which Moses insisted that he had always bought his goods from the army ‘fairly and honestly in open competition’ and that he ‘was sometimes a loser and at others a gainer’ from his business dealings with the war office. No action was ever taken against him. 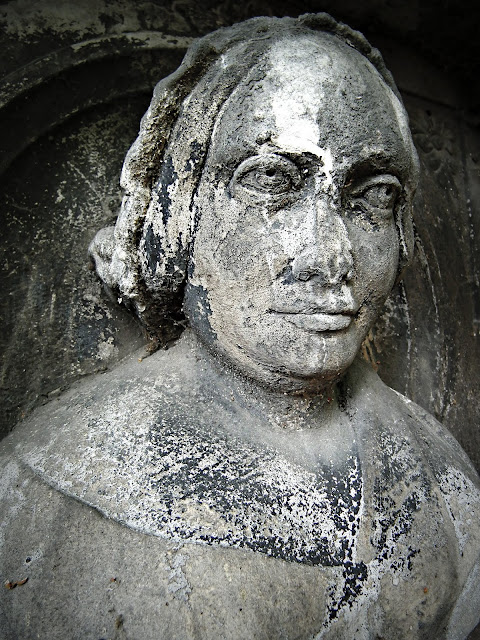 I found one other reference to Moses Levy of Gravel Lane in the newspapers. In July 1858 the Nottinghamshire Guardian ran the following intriguing piece:
The London Old Clothes Market.— Mr. Moses Levy of Gravel Lane, Houndsditch, London, has written the history of the Old Clothes .Market, about which the common council of the city have lately made so much noise. Mr. Levy states that this famous mart has existed upwards of a century; but that a few years since, in order to protect the poor dealers from the inclemency of the weather, he was induced by several benevolent members of the Hebrew race to erect a covered building for the use of these small traders in cast off garments, and the mart was removed from Petticoat Lane. Mr. Levy believes there is no discredit attached to the proprietorship of this famous institution; and having incurred a heavy risk in its construction, he does not think he ought to be deprived of the results of what the guardians of public morality lately viewed as a social convenience. He says: — "There are many ‘vested rights’, neither so well founded nor so necessary to the community, concerning which the common council have called out very loudly lately ; but he hopes it will not be forgotten that there is a class of persons— nay, if you so please, the lowest of the low— for whom such a market is — sad though it be to say so — an actual necessity . How the poor live, and how they are clothed, is one of the mysteries of London life. That mystery is solved only by those who are compelled to know thoroughly the Clothes Market in Houndsditch."
Posted by David Bingham at 10:26