The Grade II* listed Swithland slate headstone of Sarah and John Wheatly of Ave Maria Lane, EC4 is unusual, perhaps unique, in London; in the midlands however there are thousands of them. It was produced in 1790 and has the original elaborate mason’s signature; J. Winfield of Wimswould (now generally spelt Wymeswold) along the bottom edge.  In his book Of Graves and Epitaphs Kenneth Arthur Lindley notes that ‘the proximity of Swithland and its beautiful slate and the genius of native craftsmen have made Wymeswold churchyard one of the finest in England.’  The town was a centre for production of finely crafted slate products which included sundials, clockfaces, milestones, fireplaces and thousands of headstones. The slate came from quarries in the Charnwood Forest area of Leicestershire and was finely grained, allowing for sharp, detailed, carving. It is a very durable material, making this one of Bunhill’s best preserved memorials.  The lettering and carving are almost pristine, as crisp now as they would have been when John Winfield first chiselled them out 220 years ago.

Historic England’s official listing of the memorial says that “slate from the Midlands began to be available for use in London in the later C18 due to the growth of the canal network,” implying that the memorial made its way sedately to London along the various braches of the Grand Union Canal but this can’t be correct. When John Winfield completed the headstone in the early 1790’s the canals were not yet built and it must have come the 112 miles from Leicestershire packed carefully in straw on a horse drawn cart.
John Wheatly presumably had Leicestershire connections and either he or Sarah (and quite possibly both) may well have grown up there. When his wife died he commissioned John Winfield to produce this beautiful headstone with its elegant lettering and inset roundel .  As well as such well worn metaphors of mortality as a skull and crossbones (with the word 'mortality' helpfully inscribed across the top of the cranium), a cross, an anchor, a snuffed candle, an urn (‘dust to dust’) a scroll (‘ashes to ashes’) we also have a globe with the words ‘the great globe itself shall dissolve’ which is, of course, a quote from Propero’s speech at the end of ‘The Tempest’:
The cloud-capp'd towers, the gorgeous palaces,
The solemn temples, the great globe itself,
Yea, all which it inherit, shall dissolve,
And, like this insubstantial pageant faded,
Leave not a rack behind: We are such stuff
As dreams are made on, and our little life
Is rounded with a sleep. 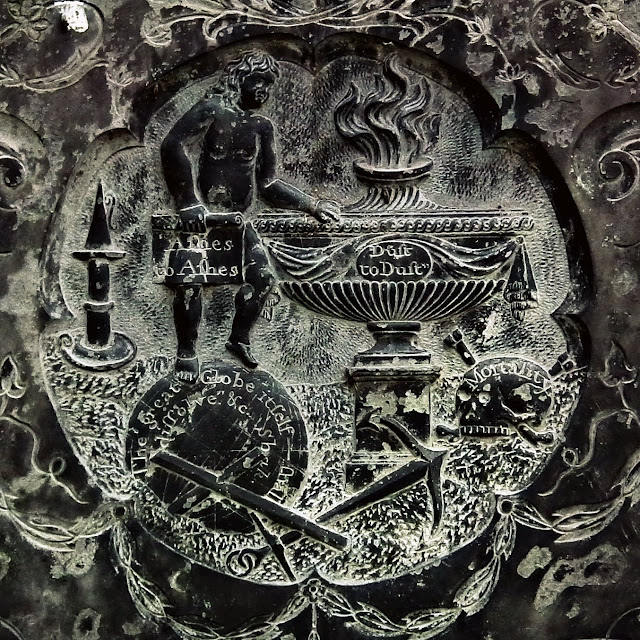 The headstone is divided into two equal columns, the one on the left initially being left blank for John Wheatly’s details to be added when he eventually died. The right hand column contains Sarah Wheatly’s details in a variety of flowery and ornate scripts and contains a short devotional verse:
Sinners prepare to meet your judge, your God
His Throne approacheth w[ith] Faith in Jesus Blood
Redemption's only Price, Man's ransom paid
Long in Affliction's Night my Soul allay[e]d:
Triumphing in his Cross, her house of Clay
Now cheerful quits for realms of endless Day


The verse seems to be an original composition albeit cobbled together out of a variety of well worn biblical phrases, perhaps John Wheatly fancied himself a poet? His own epitaph simply records his name and dates of birth and death in a simple copperplate script as though no one could really be bothered to think of anything more to say about the old man when he finally died at the age of 84 in 1823. We don’t know much about John Wheatly. He was a newsvendor who lived at 4 Ave Maria Lane and he was a subscriber to Paul Wright DD’s resoundingly titled The Christian's New and Complete British Family Bible, being a New, Clear, Full, and Universal Exposition and Commentary on the Holy Scriptures. Containing the Whole of the Sacred Text of the Holy Bible, as Contained in the Old and New Testaments, with the Apocrypha, at Large. Illustrated with Most Valuable Notes and Annotations, Theological, Critical, Moral, Divine, Historical, Geographical, Systematical, Biographical, Practical, Admonitory, Chronological and Explanatory.  The Wheatly's son Edward took over the family business when John grew too old and infirm to carry it on himself. Other than that his life is a cipher.
Ave Maria Lane by the way is a street to the west of St. Paul's, an extension of Warwick Lane between Amen Corner and Ludgate Hill.  Tradition has it that on the feast day of Corpus Christi, monks would hold a procession to St Paul’s setting off from Paternoster Row chanting the Lord's Prayer (Pater noster being the opening words of the Latin version of the prayer).  They would reach the final "Amen" as they turned the corner into Ave Maria Lane which to this day is still known as Amen Corner  after which they would chant the Hail Mary, which of course in Latin is Ave Maria. 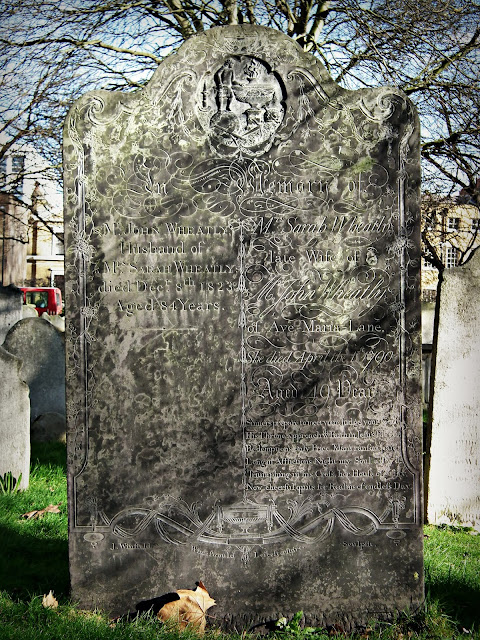