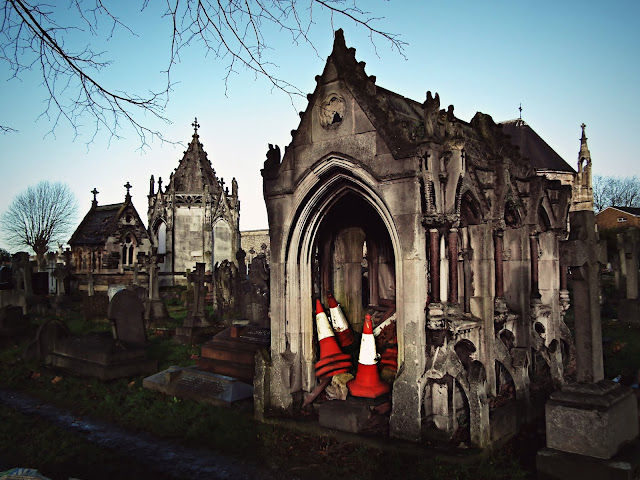 in 2008 Hugh Meller (or maybe Brian Parsons) couldn’t help referring in ‘London Cemeteries’ to the mausoleum in St Mary’s that was being used as a wood shed by the grounds staff. I presume this is the same mausoleum shown in my photo from December 2013 (above) though by the time I took my picture the contents included rubble and traffic cones as well as fallen branches and discarded wooden crosses. Perhaps this is why the staff are anxious about photography in the cemetery, particularly photography likely to find its way onto social media.
St Mary’s has an unusually large number of mausoleums for a moderately sized cemetery. This may be partly due of the relatively large contingent of wealthy Spanish and Italian immigrants buried here in the late 19th and early 20th century but Kensal Green next door also has a hefty complement of late Victorian ‘golden age’ mausoleums. For those not aware, mausoleums are purpose built buildings containing tombs or coffins. The word comes from the Ancient Greek Μαυσωλεῖον (Mausōleîon), the famous Mausoleum of Halicarnassus, the burial place of the Persian Satrap of Caria (in modern Turkey), Mausolus who died in 353BC. The original mausoleum was one of the Seven Wonders of the World listed by Antipater of Sidon in 140BC. The 45 metre high tomb suffered the same fate as six of the seven wonders and was eventually destroyed by earthquakes and human cupidity but it lasted longer than most – there were still recognisable ruins in the 15th century when the knights of St John used them as a quarry to mine for raw materials when building Bodrum castle. The knights also decorated the castle with ancient sculptures from the mausoleum and these were later rescued by the British Consul. Marble blocks from the mausoleum excavated by Charles Thomas Newton  for the British Museum in 1857 were shipped to Malta where they caught the eye of a Royal Navy engineer and were used to construct a dock in the Grand Harbour to the east of Valetta. There is no evidence to suggest that at anytime in its unfortunate history the Mausoleum of Halicarnassus was ever used to store traffic cones. 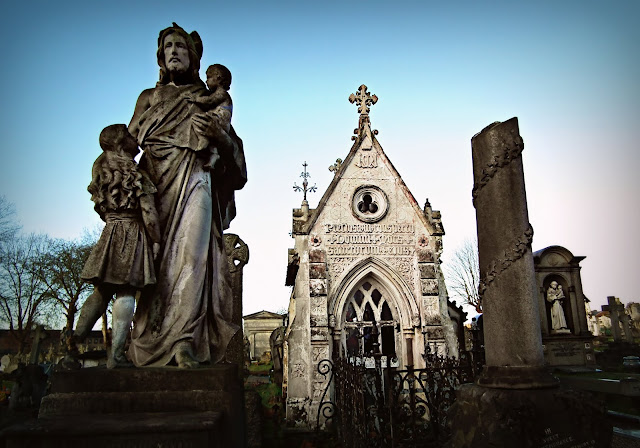 The Misa Mausoleum, built in 1870 for Manuel Misa y Bertemati, the Conde De Bayona and Marques De Misa, is a small gothic mortuary chapel in the central part of the cemetery. It has a steeply pitched roof with fish-scale tiles and metal cresting, heavily damaged stained glass windows in the side and rear walls and a tiled path, enclosed by fine iron railings, leading up to the entrance. Manuel Misa was born in 1815 in Bayona, in the northern Spanish province of Galicia. His family were of partly Italian descent and made their living from mercantile trading. Manuel studied law at the University of Santiago de Campostella and then joined his brother in the Sherry business in Jerez. Manuel travelled the world helping to build the family’s sherry business and in the 1860’s he moved to London where he eventually married an English woman Helena Busheroy Blake. The couple had two children. The sherry business flourished and Misa, along with Gonzalez Byass and Domecq, became one of the great bodegas, exporting 1,400 butts of sherry in just one month in 1873 (that’s 2800 hogsheads of wine if you were wondering, or 798,000 litres). Manuel Misa became immensely wealthy and was honoured twice by the Spanish crown, first in 1875 when he was made Conde de Bayona and again in 1889 when he was made a full grandee, the Marques de Misa. Misa contributed substantially to the fund for the building of Westminster Cathedral and when he died in 1904 he left his palatial home in Belgrave Square to the Spanish Government which uses it to this day as the Spanish Embassy. 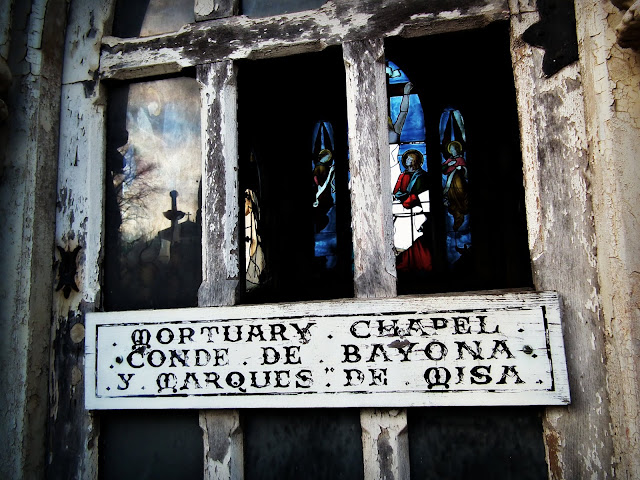 The notice on the rather damaged door of the Misa Mausoleum is interesting in refering to the building as a mortuary chapel. Strictly speaking the mausoleum ins't a mausoleum at all as there are no coffins. Manuel Misa's remain are probably in a vault below the building. This is true of all the mausoleums in St Mary's that you can actually see inside. A 'true' mausoleum stores the coffins above ground within the mausoleum itself. Even if the coffins have been removed there are tell tale coffin shelves along the walls. 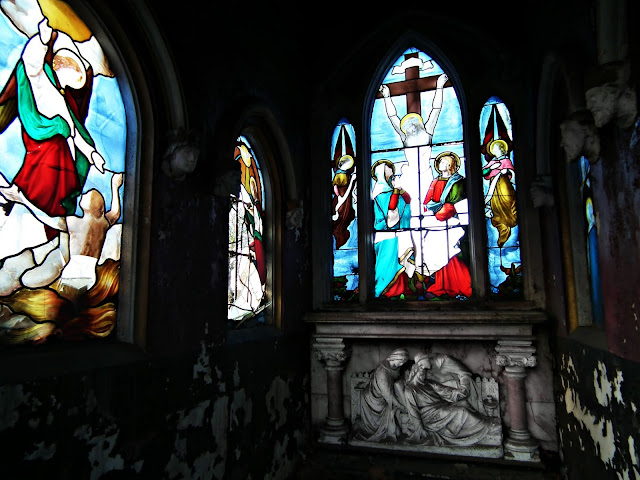 The internal view of the mausoleum makes it clear there are no coffin shelves. It is in need of a little care and attention - paint is peeling inside and out (see below) and much of the stained glass is badly damaged which lets the elements in to cause further havoc. 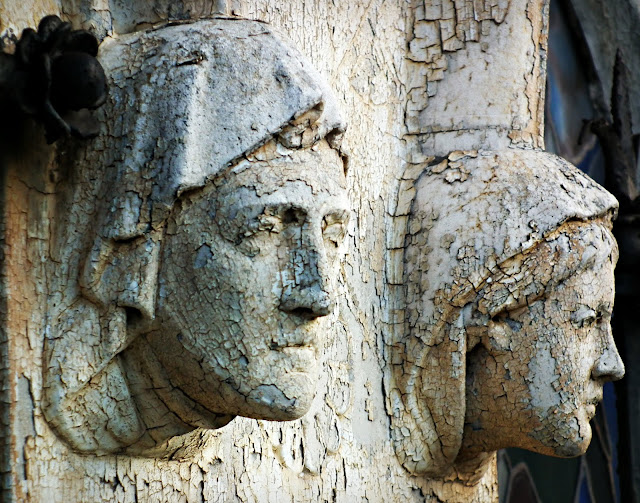 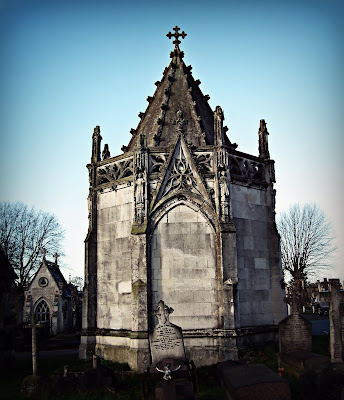 The Emmet Mausoleum was built in 1919 by the American born Major Robert Emmet DSO, for his son who had died in 1915 of typhoid whilst serving in the British army. The ornate octagonal gothic structure, built of Portland stone, was designed by William Henry Romaine-Walker, who designed Stanhope House on Park Lane. Despite being the proud descendants of Robert Emmet the famous Irish patriot father and son both served in the Warwickshire Yeomanry in the First World War though only Major Emmet, the father, saw active service. Lieutenant Emmet, the son, died before getting the opportunity to go to the front line, perhaps because he changed regiments to the Life Guards shortly after the outbreak of hostilities. The Irish newspaper, the Weekly Freeman's Journal of Saturday 13 November 1915 reported the details of the funeral:

Emmet Great-Great Grandnephew.  The death has taken place in London of Lieutenant Robert Emmet, of the Life Guards, a great grand nephew the famous Irish rebel of the same name. Lieutenant Emmet, who was only in his eighteenth year, was the son of Major Robert Emmet, the son of Dr. Thomas Addis Emmet, of New York, who has been settled in England for a number of  years past, having houses in London and Warwickshire. At the beginning of the war Major Emmet, who up to that time had been in civilian life, became naturalised as a British subject, applied for commission, and is now serving in Gallipoli. His son, though only eighteen years age, followed his example, and was with his regiment when he contracted an attack of typhoid, to which after three weeks he succumbed in a London nursing home. He was a most promising young officer, and  his death is deeply regretted by his fellow-officers and the men of his regiment. He was buried with military honours on Tuesday at Kensal Green Cemetery, the coffin being borne on a gun-carriage, and escorted through the streets by a contingent of the regiment.
The Memorial Service. Prior  to the funeral a Requiem mass was celebrated at the Jesuit Church, Farm street, the Right Rev. Dr. Mostyn, Bishop of Menevia at the Church of the Immaculate Conception. About 300 officers and men of the 1st Life Guards were present, including the Commanding Officer, Sir George Holford, and Major General Sir Francis Lloyd. The band of the regiment, under the direction of Mr. Miller, played Chopin’s funeral March, and the trumpeters at the conclusion the ceremony played the “Last Post” and the 'Reveille.” The music during Mass was sung by the Farm Street Boys Choir, conducted by Mr. J. Farren. A R.C.M. 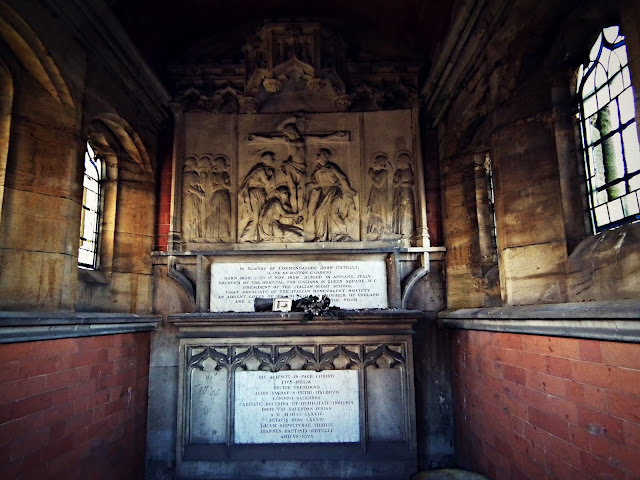 The inscription on the altar in the Ortelli mausoleum reads:

"In memory of Commendatore John Ortelli (late of Hatton Garden). Born 1830, died 1st Nov. 1898, buried in Appiano, Italy. Founder of the Hospital for Italians in Queen Square, WC, President of the Italian Night School, first Associate of the Italian Benevolent Society, an ardent lover of his country and admirer of England and a true friend to the poor."


The Ortelli's came from the lake Como region in northern Italy and had first emigrated to England in the 1790's. The family became quite prominent in the barometer manufacturing industry. John Ortelli (whose Italian name was Giuseppe, though he preferred to be known as the anglicised John even when in Italy) was a looking glass manufacturer based in Hatton Garden who became extremely wealthy. In 1864 he founded the Ospedale Italiano, the Italian Hospital, in Queens Square with the donation of two adjacent houses. These were later demolished and replaced with a purpose built hospital on the same site. This still stands, at number 40 Queens Square and bears an ornate plaque with the founders name. The hospital was closed in 1990 but the building was acquired  by Great Ormand Street Hospital for use as office accommodation. 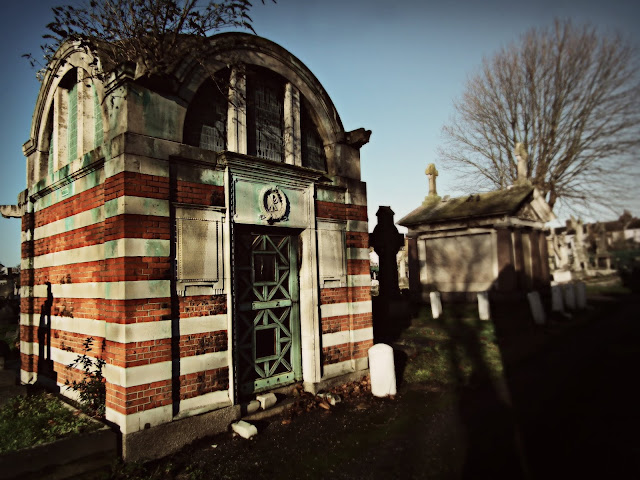 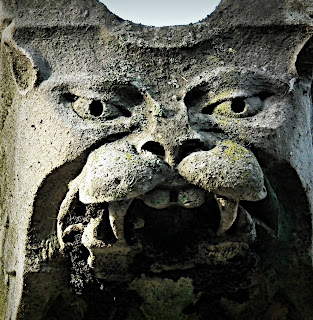 These pictures were taken before the recent restoration of the Grade II listed Campbell Family Mausoleum. The collapsing marble tiles, leaks in the gilded ceiling and rampant buddleia have all been sorted out by a specialist restorer and now the place looks as good as it did in 1904 when it was first built. The neo byzantine mausoleum was designed by CHB Quennell for the family of John Davies Campbell who was born in Manchester in 1831. Campbell emigrated to Peru in the 1850’s where he became a speculator in nitrates for use as fertilisers in the form of saltpetre and guano (bird shit).  He partnered with another British expat, Joseph Outram to form the company Campbell and Outram which exploited the nitrate deposits of the Atacama desert. Campbell became a wealthy and powerful man, he was the mayor of the enticingly named nitrate port of Pisagua and married a Peruvian, Delmira Vargas. He died in 1878 and was buried beneath an impressive tomb in the town cemetery of Tacna. After his death Delmira took her husbands money and ran to where she had probably been hoping he would take her since the early days of her marriage; London.  Neither she nor the children ever seem to have returned to Pisagua or Tacna. All of them were buried in mausoleum at St Mary’s. 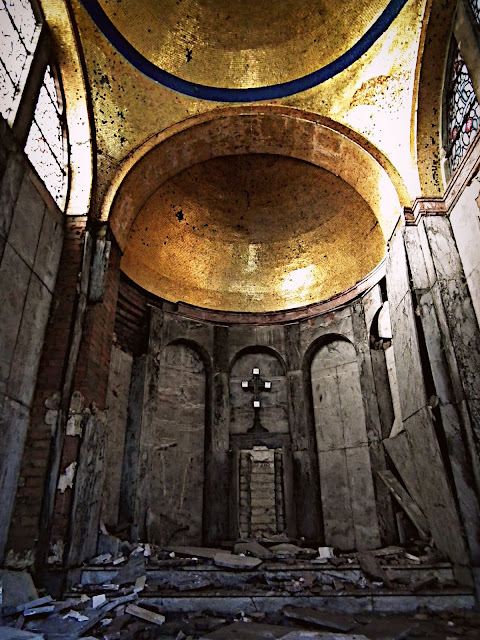