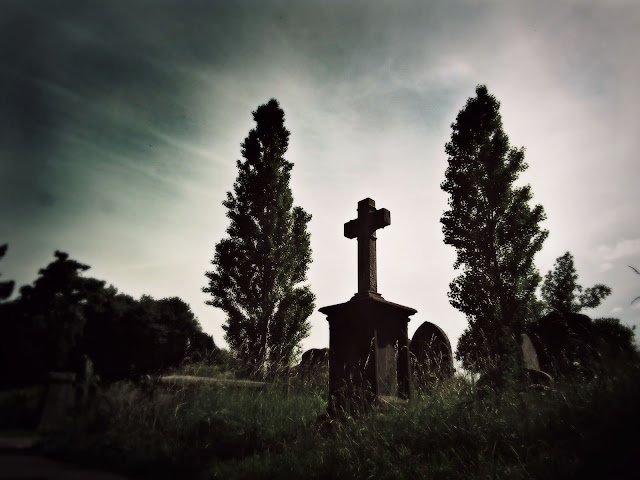 DEATH OF ONE OF THE CHRISTY MINSTRELS —the well frequented Hall of these minstrels was dark and silent last night on account of the lamented death of Mr. Henry Crocker, who died yesterday afternoon, after a painful illness of nearly two years' duration, at the age of thirty-five. Mr. Crocker was one of the joint proprietors of the Christy Minstrels, and a performer in the original company. He was a favourite with the public, and his loss will be deeply regretted by a large circle of friends who esteemed his private character.
London Daily News - Saturday 18 December 1869 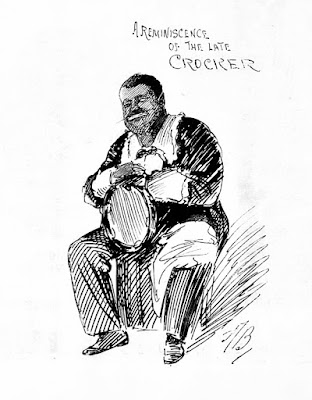 We know very little about J.P. Crocker of the Christy Minstrels. When he died the London Daily News couldn’t even get his name right – he was certainly no Henry. Other newspapers at least had his initials down correctly, JP, even if they weren’t sure what they stood for. The Examiner said that he was “a robust healthy man”, which seems unlikely, given that he had just died of tuberculosis. He had been ill for two years and had not set foot on the stage for at least 12 months. Joseph Paul Crocker was born somewhere in the United States in 1834 and came to England with his close friend and associate George Washington Moore in 1859. Both men had been members of Christy’s Minstrels in New York but for some reason decided to leave the States to follow J. W. Raynor and Earl Pierce to England where they had set up ‘Raynor & Pierces Christy Minstrels’ and performed to great acclaim at the St James Hall in the West End. Both in the United States and in England troupes of Christy’s Minstrels replicated by binary fission, prolifically splitting up and taking on new members, with all descendants claiming to be the original and genuine. Edward Pearce Christy, the founder of the group, fought several legal battles in the States to retain control of his name and in England the battle to be known as the genuine Christy’s Minstrels also ended up in the courts. John Edmund Quick, a 26 year old pretender, was prosecuted in 1868 for stealing £200 worth of handbills from the St James Theatre and, after carefully excising the name of the proprietors, using them to advertise an inferior and ersatz version of the Minstrels in Banbury. JP Crocker was one of the proprietors of the St James Hall troupe of Christy’s Minstrels along with George Moore.  Frederick Burgess, who later took over after Crocker’s premature death, was the manager. Moore and Crocker were both performers. Crocker was a tambourine player and eccentric dancer whose performances evoked roars of laughter according to the London Evening Standard in a contemporary review which also said that he exhibited a “marvellous command of his bodily muscles in a thick shoe dance.” I could only find one picture of him, a drawing in the Illustrated Sporting and Dramatic News of September 1893 showing him made up for the stage, produced almost a quarter of a century after his death. The inscription on Crocker’s grave in Brompton Cemetery reads “Sacred to the memory of JP Crocker of the Christys Minstrels, St James Hall, who departed this life 17th December aged 35, buried 23rd December, 1869. This memorial is dedicated to his lasting memory by Fannie Crocker and his late colleagues G Washington Moore, Frederick Burgess and the members of the Christys Minstrels in affectionate remembrance and as a tribute to one whose kind heart endeared him to all who knew him. Years of sickness affected not his courage or rich vein of genial humour.” 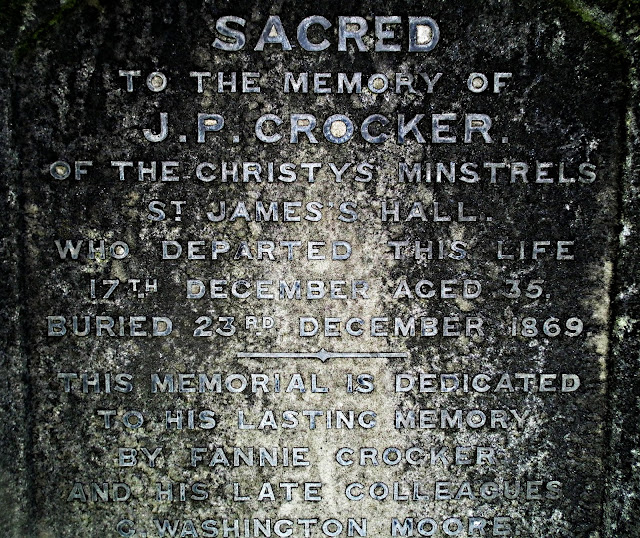 Christy’s Minstrels, formed by Edwin Pearce Christy in 1843, were the best known of the original wave of blackface performers that emerged in the United States in the decades before the civil war.  In 1847 they performed at a benefit concert for Stephen Foster in Cincinnati; this was the start of a close working relationship with the composer. They later specialised in performances of his songs and he even granted them the exclusive rights to his ‘Old Folks At Home’ (aka ‘Swanee River’). Christy popularised three part minstrel shows which started with a ‘walkaround’, the entire company marching onstage and singing and dancing their way through an opening number, before sitting in a semi circle to exchange banter with the Interlocutor the master of ceremonies. Minstrel shows had several stock characters, the slave Jim Crow and the dandy Zip Coon (whose signature song had the familiar chorus ‘O Zip a duden duden, zip a duden day’) and the inseparable pair Tambo and Bones. JP Crocker, the portly tambourine player was Christy’s Tambo and GW Moore its Bones. This review of Christy’s Minstrels in the London Evening Standard of 19 September 1865 gives a detailed account of their London shows:
The entertainment given last at the lower room, St. James's Hall, is certainly one the best and diversified of the kind have seen or heard on any former occasion. It opens with a painting called Christy's Magnificent Diorama, in two parts, the first part descriptive of the outward voyage of the Great Eastern for New York, which arrives in time for the passengers to witness a performance of the “Christy’s Minstrels” at the Royal Academy of Music, New York ; the second part illustrating a journey down South, through Washington to a plantation in Dixie's Land, where the Southern “darkies” are beheld in their glory. After the dioramic exhibition there is a concert interspersed with sundry displays of Ethiopian wit between the Bones of the company, Mr. E. W. Moore and the tambourinist and eccentric dancer, Mr. J. P. Crocker, which creates roars of laughter. The diorama is followed by a new Christy's extravaganza, entitled Hair Brushing by Patent Machinery supported by Messrs. J. P. Crocker, E. W. Moore, and J. Ritter; to which succeeds an original sketch, by Mr. E. W. Moore, called The Breakneck Act, characters by Messrs. Moore and Crocker; concluding with Christy’s popular burlesque The Rival Darkies, parts sustained by Messrs  J.Ritter, L. Ludlow, Moore and Crocker. The Rival Darkies and Break-neck Act, if we remember rightly, are old friends; but Hair Brushing by Patent Machinery is new to London audiences. Performances by the Christy's Minstrels'’ without singing to many may appear uninviting; but the burlesque and extravaganza are exceedingly amusing, and all three were received last night with roars of laughter. Perhaps a more extraordinary entrance on the stage was never conceived than that of Mr. G. W. Moore, in the Break-neck Act, in which is made to bound into a room through the window, fall from height of some six or eight feet, and turn a somersault  on the stage. Mr. Moore is wonderfully active, besides being the most energetic and skilful of “Bones” and is, to boot, a first-rate comic singer. But the activity of the company is no means absorbed in the person of Mr. Moore. Mr. J. P. Crocker exhibits a marvellous command of his bodily muscles in a thick shoe dance, and Mr. J. Ritter (the champion!) in the Attakapas Jig—a sort of double-shuffle dance—displays an amount of terpsichorean agility quite out the common way. It is, however, in the musical line that the Christy Minstrels’ especially excel. There is not a weak hand in this company, vocal or instrumental. The band is composed of a violin, violoncello, cornet and harp— sufficient for their purposes their ensemble playing is literally irreproachable. Their solo playing, too, is more than creditable... The “Christy Minstrels” have announced the present as “positively their last season in London prior to their return to the United States.” 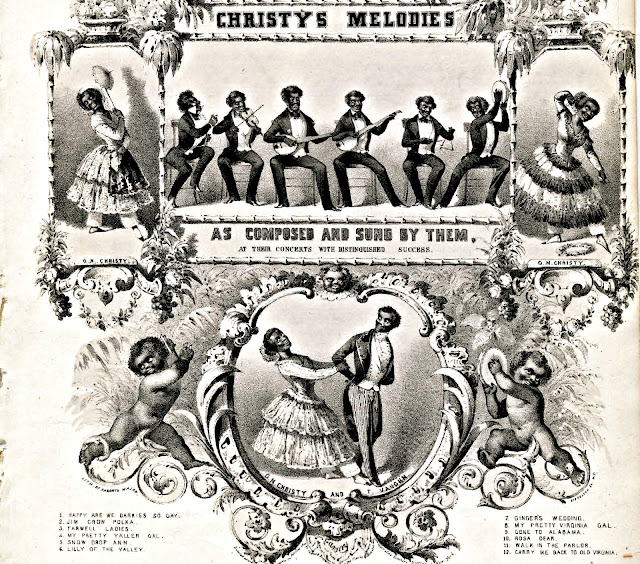 Minstrel shows proved to be even more popular in England than they were in the United States. The Christy’s Minstrels run at the St James Hall lasted for almost 40 years, from 1865 to 1904. George Moore never went home to the States; he died in London at the grand old age of 89 in 1909 and was buried a short distance away from his friend JP Crocker in Brompton Cemetery. The appetite for racist tomfoolery the pair planted in the English became an enduring legacy; 100 years after the Christy’s opened at St James Hall we were still lapping up blackface and Stephen Foster songs in the form of the hugely popular Black & White Minstrel Show. By 1964, when 73 million Americans were tuning into the Ed Sullivan Show to see the Beatles, 21 million Brits regularly tuned into the BBC to watch the Black and White Minstrels. I was one of them. As a kid I loved them. I loved them so much my parents took me to see one of the 6477 theatre shows the Minstrels put on between 1962 and 1972 when they weren’t making TV shows (a run which put them in the Guinness Book of Records at one time as the stage show seen by the largest number of people). We only had a black and white television and I was totally unprepared for the spectacle of the Black & White Minstrels in colour; the female dancers (who were not in blackface) whose dresses were technicolour southern belle taffeta confections and the Minstrels themselves strutted the boards in metallic gold frockcoats and top hats. Inevitably I grew up and as a teenager in the Seventies the Minstrels fell off my radar which had become more attuned to the likes of David Bowie and Led Zeppelin. I was quite startled to discover that they carried on broadcasting until 1978, well after the Sex Pistols had disbanded and the Ramones and Siouxsie and the Banshees had found chart success. Looking back at my childhood, sometimes it seems like I was born in 1860 rather than 1960. The swinging Sixties never really arrived in the South Yorkshire pit village I grew up in but the Victorians and Edwardians were still clinging on for grim death. Patronising racist stereotypes abounded, not just blackface minstrel shows on Saturday night TV; I loved ‘Song of the South’ when my uncle took me to see it at the Pavilion cinema in Attercliffe, Sheffield. The films best known song is, of course, ‘Zip-a-dee-doo-dah’ whose chorus is a rephrasing of Zip Coon’s ‘Zip a duden duden, zip a duden day’. I think I was already heavily into Enid Blyton’s retelling of the Brer Rabbit stories before I saw the film. In school the Stephen Foster songbook was well thumbed and we often gathered around the piano to trill "I come from Alabama with a banjo on my knee, I'm going to Louisiana, my true love for to see" leadenly accompanied by the teacher. And of course there were the Golliwogs that you could collect if you saved the tokens from Robertson’s jam (the company stopped using Golliwogs in its advertising only in 1988 and stopped putting Gollys on its jam jar labels in 2001!) and the Golly that leered at you from the wrapper of Blackjack chews. There were the Tarzan films I adored where a white man marooned in Africa who was brought up by apes manages, somehow, to learn to speak impeccable English, live in a treehouse, cover up his genitals and generally learn to be more civilised than the benighted natives who were utterly beholden to the witchdoctor and died in their hundreds whenever there was a fight. And ‘Daktari’ and ‘Cowboy in Africa’ where the white people drove around in Land Rovers, wore safari suits, lived in ranch houses and were the constant focus of attention while the natives wore loincloths, lived in mud huts and were the comic interludes or a dangerous threat according to the diktat of the storyline.